The Hateful 8 drill might be the toughest we’ve attempted so far in our Start Shooting Better series. If you’re looking for a way to push the limits of your pistol shooting ability, this is a great exercise (or maybe an exercise in frustration). Watch the video for a full explanation and our attempt at the drill, or you can scroll down and read the transcript.

Download and print your own B-8 bullseye target for this drill here (PDF).

CHRIS: Hey everybody, I am Chris Baker from LuckyGunner.com with John Johnston from Citizens Defense Research. This is another episode of our Start Shooting Better series and the drill we’re covering today is called the Hateful 8. And it really is hateful and I’m blaming John for that because he found the drill and suggested it, so I’m going to let you take it from here.

JOHN: So, Hateful 8 as developed by Bill Blowers at Tap Rack Tactical. We’re going to be at eight yards on a B-8 repair center (our very favorite target, it seems). On the timer, draw, fire four rounds, perform a slidelock reload, two rounds, perform a slidelock reload, two more rounds for a total of eight rounds. You have eight seconds. Not a lot of time. 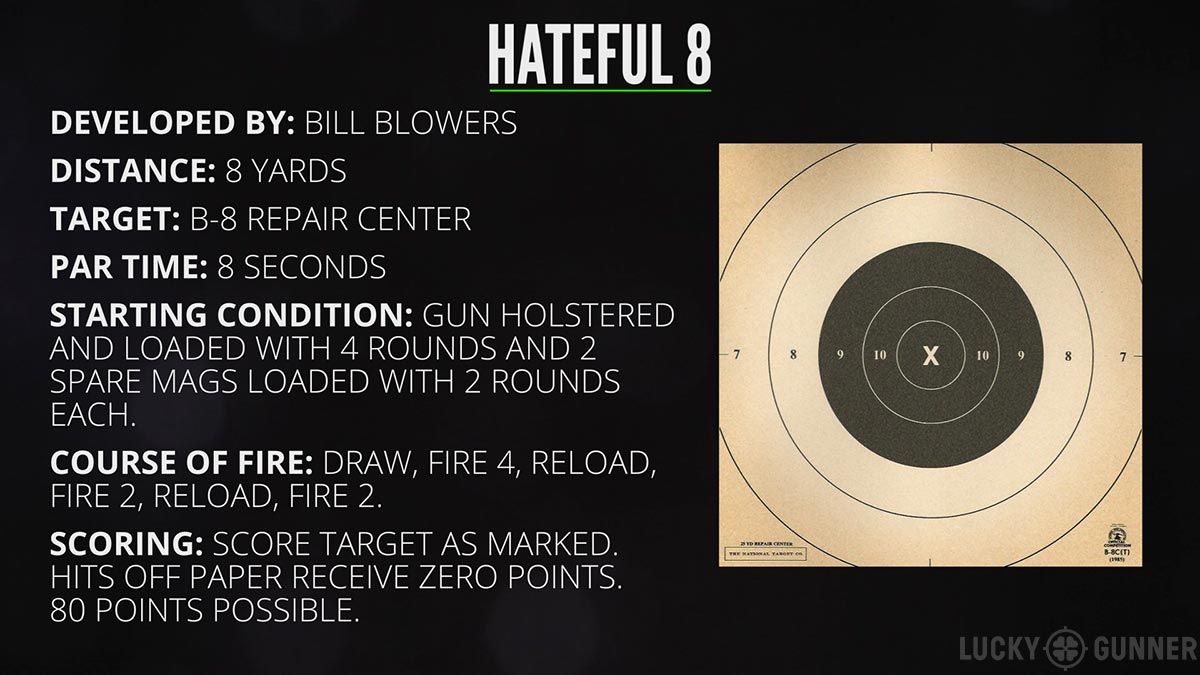 So while the Hateful 8 is an incredibly soul-crushing disappointment of a drill — not because it’s not awesome, but because it shows you what you’re doing poorly — there’s not a passing or a failing score, really. It’s supposed to be a gateway. So the first goal is to make all the shots in the 8-inch circle under the par time. Second goal is to make all the shots in the black under par time. Then when you’re really getting good, if you can shoot 76 out of 80 — awesome. If you need to make it more difficult or want to challenge yourself even more, you can do random round-count reloads, but I think it’s a really cool drill to force you to not over-confirm sight pictures, to have quick hand speed on the reloads and the shooting. I enjoy it a lot. I’ve only shot it the two times we shot it on camera and then once afterwards messing around with it. It’s very interesting. 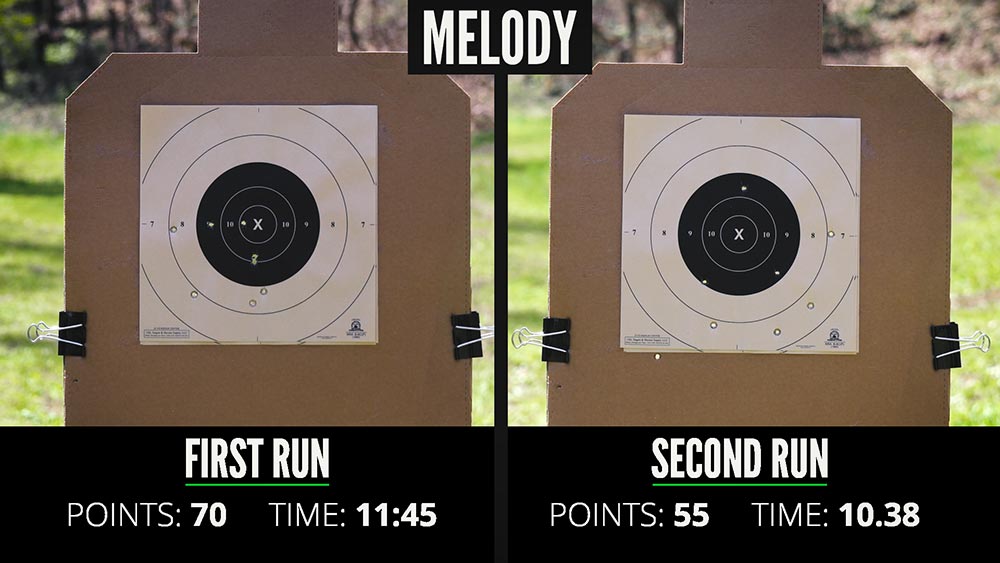 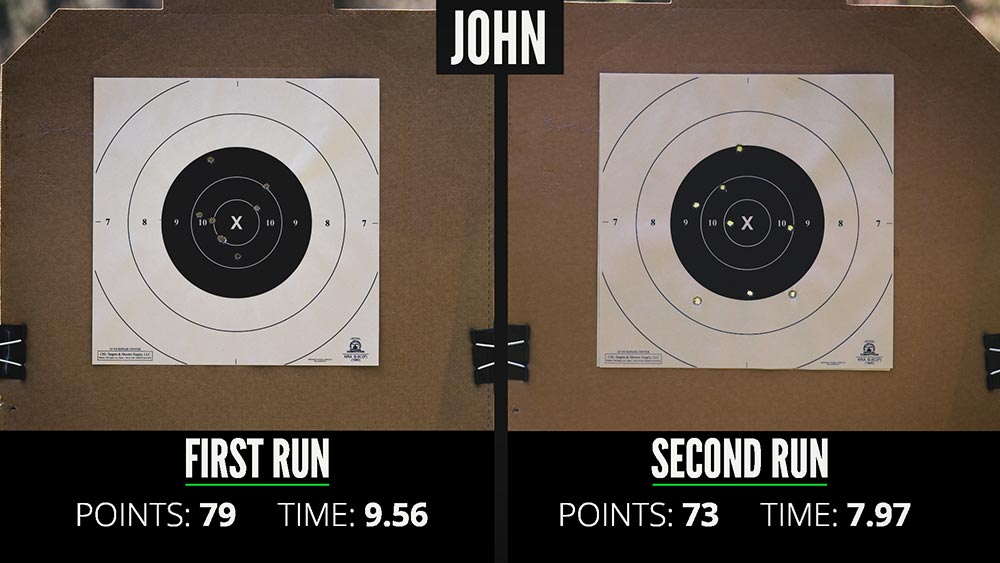 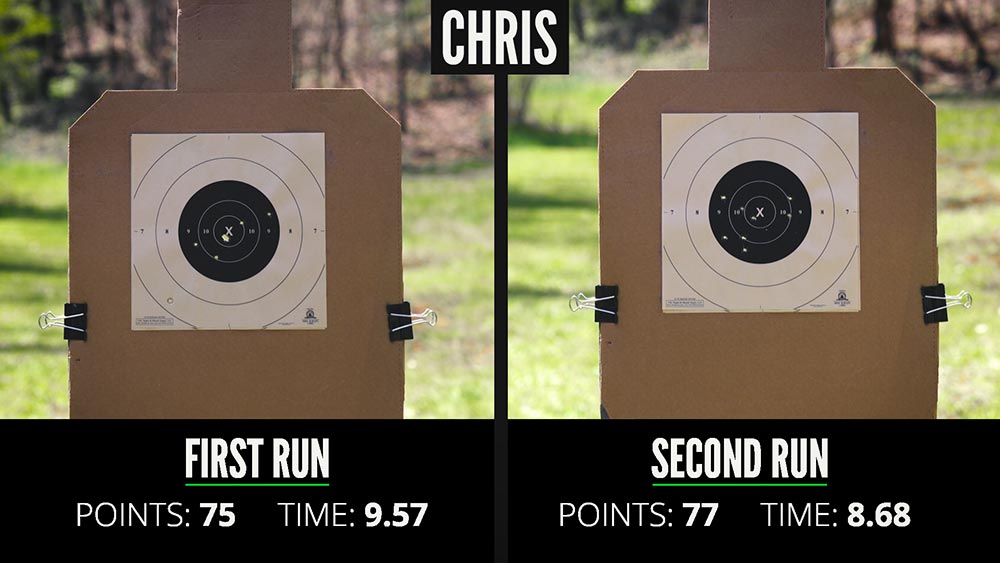 CHRIS (VOICE OVER): John, Melody, and I each attempted the Hateful 8 drill twice for today’s video. John was the only one who managed to do it under eight seconds, and that was on just one of his two runs. So like John said earlier, this is not an easy drill. If the eight second par time seems way out of reach or you find yourself struggling to even stay on paper when you’re shooting at that speed, you might consider starting with a 10 or 12 or even 15 second par time. The goal is to push you out of your comfort zone for speed while still maintaining a high standard of accuracy. So go at a pace that’s going to be challenging for you at your current skill level.

I think of the Hateful 8 as an accuracy drill disguised as a reloading drill. You have to have a smooth and consistent reload in order to do well on this, but you also can’t let the reloads distract you because it takes a lot of mental discipline to keep your hits in the black for all 8 shots.

You can buy B-8 targets online or print out your own using the link we’ve provided. Try out the Hateful 8 and let us know what you think.