After our disappointing range time with the Sig P322, we decided to try out one of its more humble competitors in the field of .22 LR pistols: the budget-priced Taurus TX22 Competition.

Hey everybody, Chris Baker here from LuckyGunner.com. By popular demand, today, we’re going to take a look at another .22 caliber semi-auto pistol: the Taurus TX22 Competition.

In our last video, I reviewed the Sig Sauer P322. Despite an impressive set of features, our sample had numerous reliability issues for an overall disappointing experience.

In response to that video, a lot of you guys mentioned the Taurus TX22. Some of you suggested the Taurus as a superior alternative to the Sig. Others wanted to know why I didn’t include the Taurus among the pistols that I compared to the P322.

There are a couple of reasons for that. I will admit up front that I have not been a fan of Taurus firearms. We’ve actually had this Taurus sitting in our company safe for well over a year. One of my co-workers picked it up for an unrelated project. I’ve seen it in there, but I have mostly ignored it. I have had exceptionally bad luck with Taurus firearms. Every time I have fired a Taurus or been with someone who fired a Taurus, it has experienced serious mechanical problems. Now, granted, that’s only been maybe five or six guns. But it’s really hard to overlook the biases we derive from personal experience. After the third or fourth consecutive lemon, it seemed like a waste of time and money to keep giving Taurus second chances.

Having said that, Taurus did get a new CEO in 2020 and he seems genuinely interested in addressing the quality issues. Some of their new revolvers look promising, and the TX22 has attracted a considerable following. So now is as good a time as any to try Taurus one more time.

The other reason it did not even really occur to me to compare the Sig P322 and the Taurus TX22 is that I think they belong in completely different categories of .22 pistols. 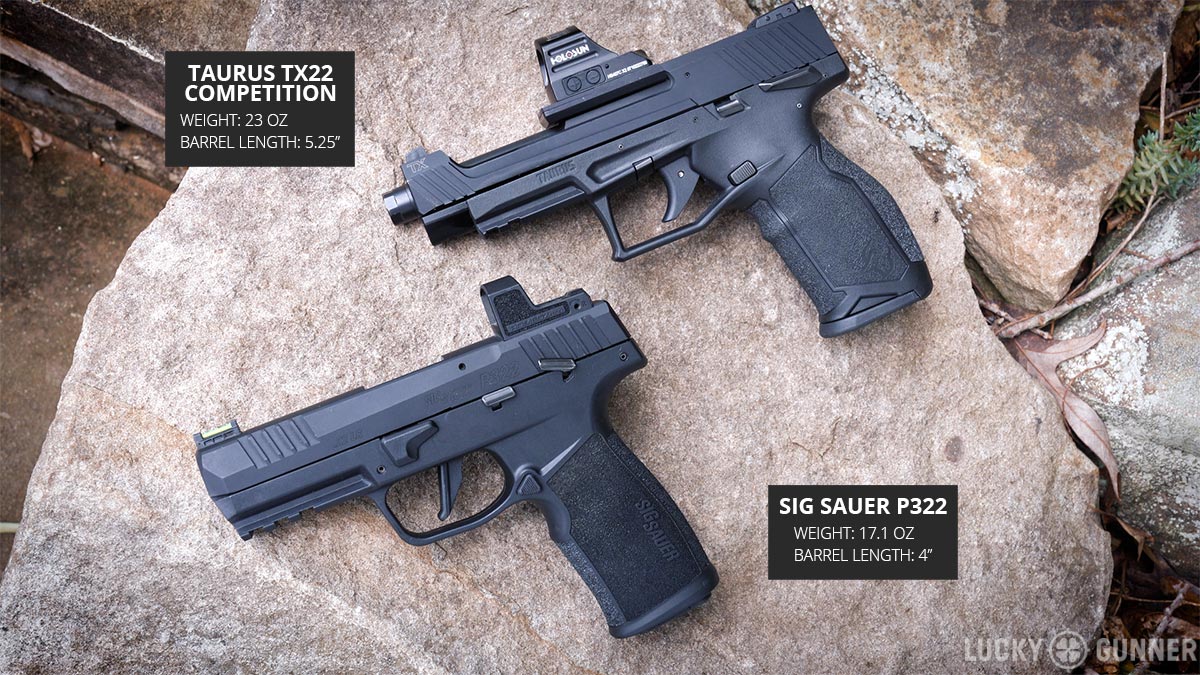 On the surface, they do have a lot in common. They both feed from magazines with a capacity greater than ten – 20 round mags for the Sig and 16 for the Taurus. For now, that is still a relatively novel feature for .22 LR pistols. They both come optics-ready from the factory. No extra parts, adapters, or gunsmithing are needed in order to mount a micro red dot sight. They both have muzzles threaded for a suppressor or a comp. The Taurus weighs about five ounces more than the Sig, and its barrel is an inch and a quarter longer. Otherwise, they’re close to the same size.

The biggest difference between the two – and I would argue that it’s a pretty major one – is the position of the optic. On the Sig, the optic mounts directly to the slide. It’s no different from most centerfire pistol optics. The Taurus comes with mounting plates that attach to the top of the barrel. That positions the optic closer to the middle of the pistol, just above the trigger.

This is not necessarily a bad thing. But it is why the Sig is what I would consider a defense-style training pistol and the Taurus is not. If you’re going to use a .22 as a training analog for your centerfire defensive pistol, you really want the two guns to have as much in common as possible. This is especially important for practicing things other than basic marksmanship, like your drawstroke, reloads, and other manipulations.

Ideally, you would have a .22 conversion kit or a .22 pistol that is an exact replica of your carry gun. Those are not available for every model. So the next best option is a training pistol with the same controls and manual of arms, the same type of sighting system, and compatibility with the same style of holster as your carry gun.

The forward optic position on the Taurus will make certain manipulations a little different. More importantly, it means holster compatibility is difficult. And even if you get a holster that has a special cutout for the optic, it’s probably not going to work very well inside the waistband. The optic will end up below the beltline, and that’s likely to present some challenges for practicing the drawstroke. 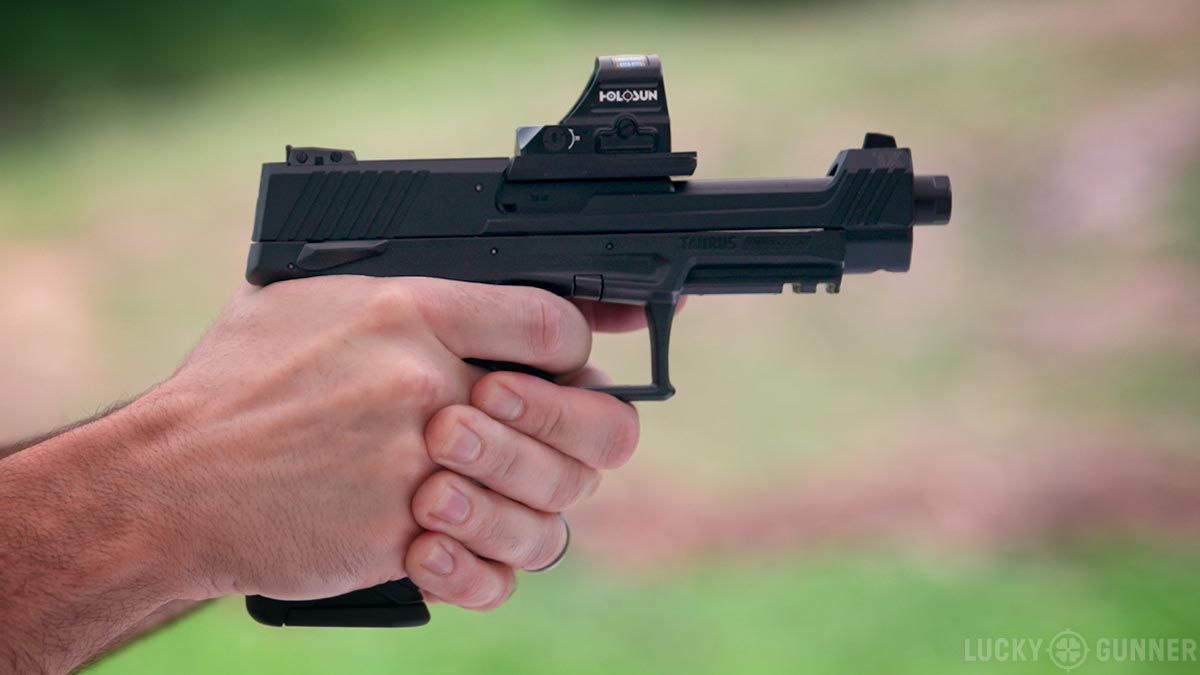 The original, non-optics-ready TX22 is much closer to a defensive trainer. It might work well as a stand-in for an iron-sighted defensive pistol. But that’s obviously not what Taurus was going for with the TX22 Competition.

The name and the placement of the optics suggest that it’s meant to compete with traditional style target pistols like the Ruger MK IV, the Browning Buckmark, and the Smith & Wesson Victory. But it doesn’t exactly fit in with those guns either. We expect a target pistol to have a specific type of trigger. They usually have a wide, flat trigger shoe, little to no takeup, and a light, crisp break.

The TX22 trigger is a bit unusual. There’s a fair amount of slack that feels kind of crunchy, and then there’s a light, clean break with a short reset. It’s far better than the mushy trigger on the Sig P322. But if you’re expecting a typical target pistol trigger, you’ll probably be disappointed. It’s more like a very light striker-fired trigger.

But regardless of the trigger or how you want to classify the Taurus TX22, the big question is reliability. Did this gun function better than any of the other Taurus pistols I’ve tried? 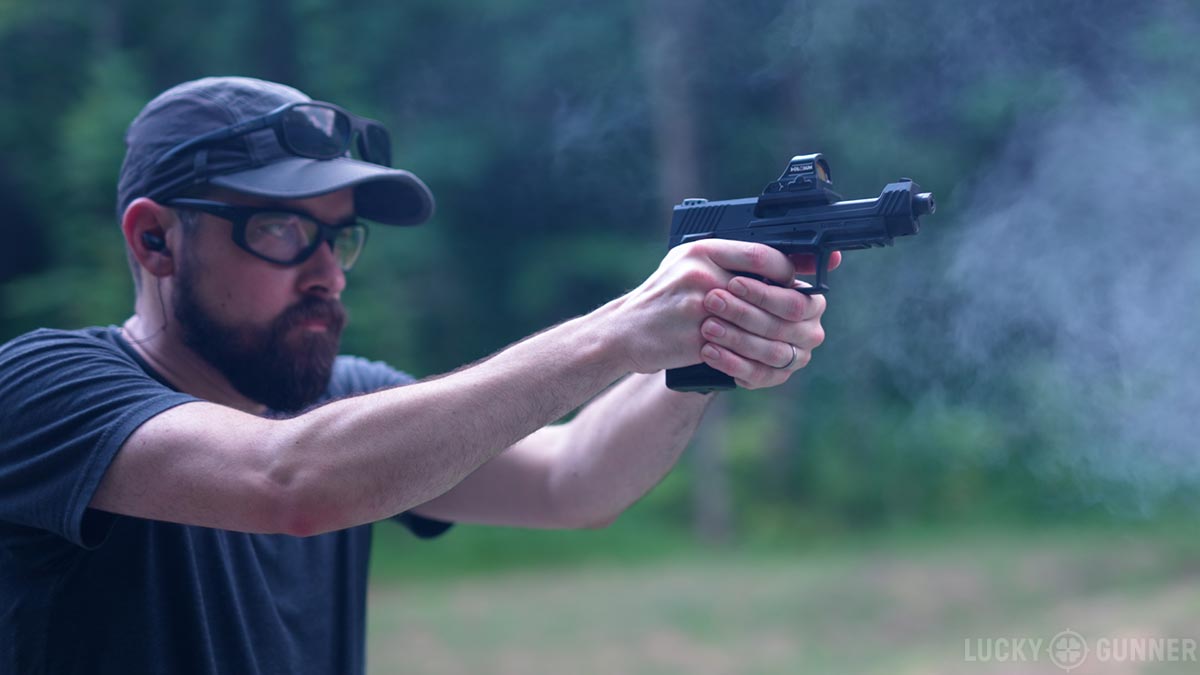 I fired 1500 rounds through the TX22 last week. Reliability started out really strong with 500 trouble-free rounds of CCI Mini-Mags. No feeding problems. None of the failures to fire like I had with the Sig. Then I tried a box of the CCI Subsonic Clean polymer coated ammo. That load induced some stovepipes and failures to feed. The slide also failed to lock open on the last round with that load. But that’s not too surprising. A lot of .22s struggle with cycling lower velocity ammo.

I got the gun cleaned up and lubed, and tried a few more loads. But high velocity or not, the TX22 had trouble feeding all of them. Most of the failures were the kind where the bullet hangs up on the feed ramp and the slide closes on the case and deforms it. With five different loads, I got an average of two failures to feed for every 50 rounds fired. 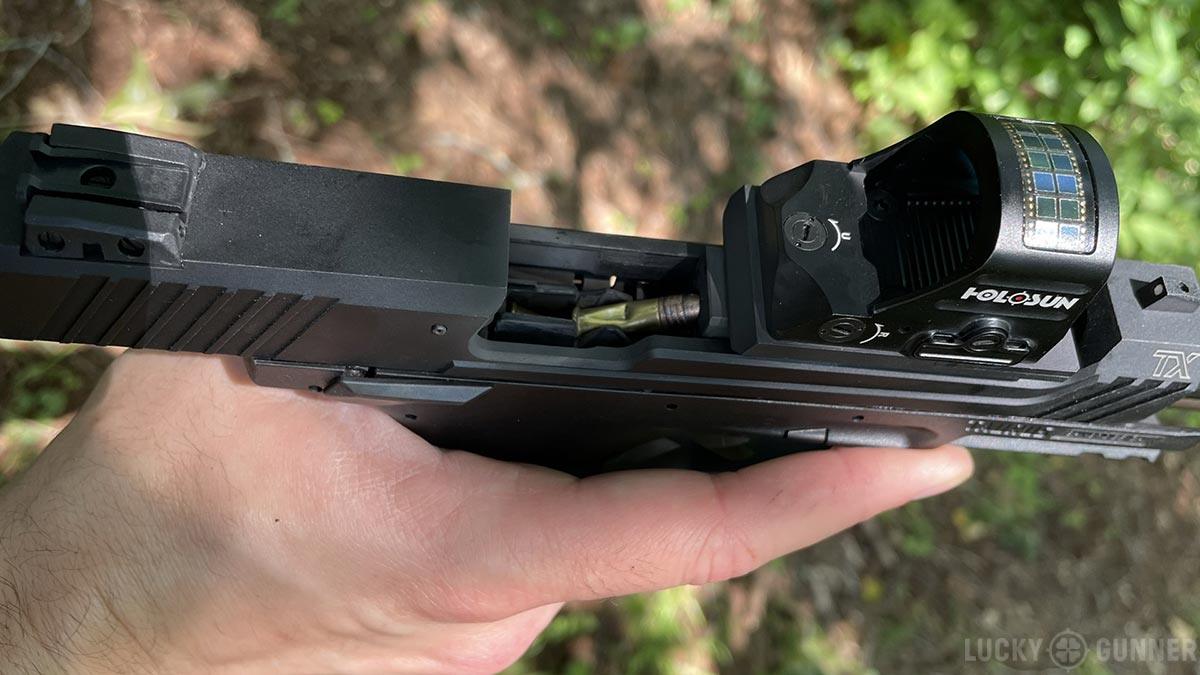 So then I went back to the CCI Mini-Mags and fired another 100 rounds. Again, no problems at all. It looks like this TX22 is especially ammo-sensitive. It only liked one of the seven loads I ran through it. Again, that’s not unusual for a .22. And it’s not unusual for Mini-Mags to cycle better than other .22 loads. The Sig P322 cycled best with Mini-Mags, but it still had a lot of those failures to fire. The TX22 had zero ignition problems with any of the ammo we tried.

Besides being picky about ammo, I really only had one other problem with the TX22. There’s a roll pin here in the slide that gradually backs its way out as the gun is fired. I’ve tapped it back in there a couple of times but it always works its way out again after a couple hundred rounds. Nothing too serious, but you might want to keep an eye on that if you decide to buy one of these pistols. 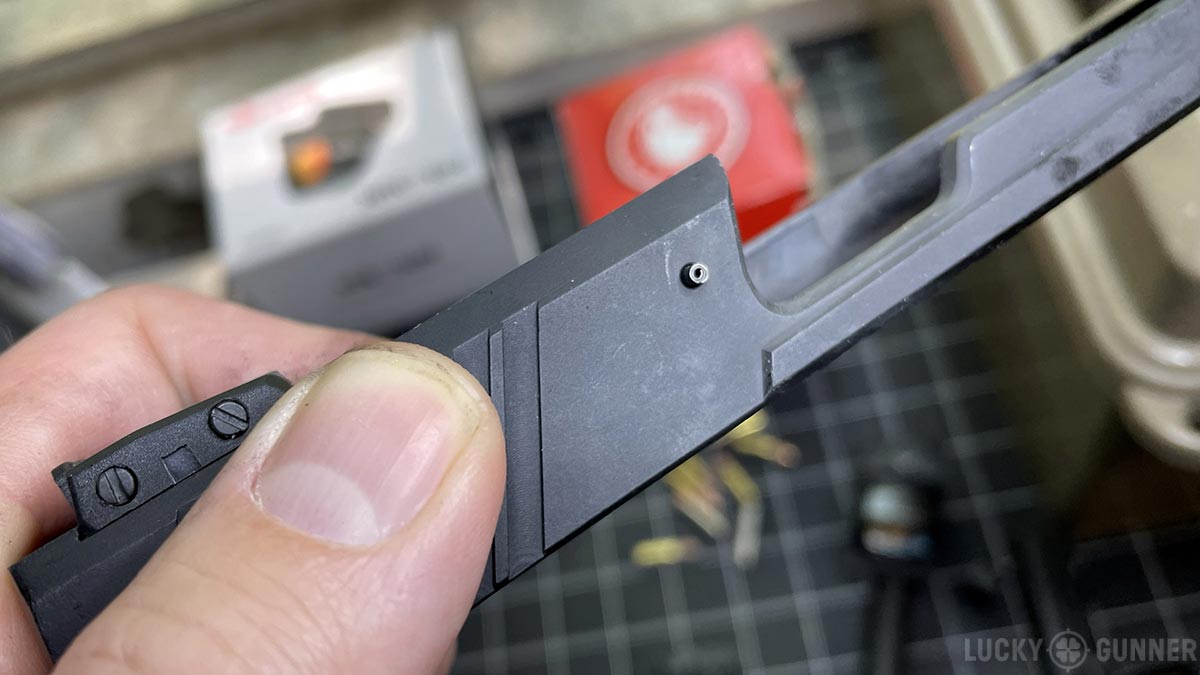 Overall, this is the best experience I’ve had with a Taurus pistol. It’s far from perfect, but few .22 pistols run 100% of the time. Of course, it’s important to remember for this or any other review, I only get to evaluate one sample. I heard from some P322 owners after that last video who have had a lot of the same problems that I did. And others have run a couple thousand rounds through their P322s without any issues at all.

Likewise, the TX22 owners that chimed in have had varied experiences. This gun has a lot of fans, but some of you complained about serious problems as well. If you do a web search for “TX22 broken slide,” it looks like that is not an uncommon problem. Apparently, the area here in the front portion of the slide around the cutout for the barrel and guide rod is prone to snapping off completely. It sounds like Taurus has been pretty good about replacing these under warranty when that happens.

So there are always trade-offs. The Taurus TX22 is a budget-priced pistol. If you’re in the market for a .22 pistol that’s optics-ready and suppressor-ready and you don’t care whether or not it’s a defensive trainer style pistol, I would probably suggest one of the variants of the Ruger MK IV that has those features. There’s a reason the Ruger MK series is so ubiquitous – they’re just really good guns.

But right now, a MK IV Lite like this one is typically priced around $500. The TX22 Competition is usually about $100 less than that. And if you don’t plan to mount an optic, the standard Taurus TX22 is under $300. Either model represents a lot of value.

Guys, I hope you found something helpful in this review. If not, here’s a life tip you might find useful instead: always sing Happy Birthday at a fast tempo. Whenever somebody starts a round of Happy Birthday, they tend to hold out that first note to wait for everyone else to join in. That sets a sluggish tempo for the song and the next thing you know, this poor person is staring at a cheap flaming sheet cake from Kroger while everyone around them sings a funeral dirge. It’s depressing. Keep it fast and energetic. Clap if you have to to get all those other slackers in line. The birthday boy or girl will appreciate it.

Of course, if you really want them to have a happy birthday, you’ll get them some ammo, and you’ll order it from us with lightning fast shipping at LuckyGunner.com.

Is the Ruger LCP II .22LR the Ultimate Underwear Gun?