.380 ACP is all the rage these days for pocket semi-autos, but the humble .32 ACP still has its fair share of loyal fans. Based on the results of our latest batch of ballistic gelatin testing, we’re looking at the best 32 ACP ammo for self-defense.

Get more details in the video below, or keep on scrolling to read the full transcript.

The results of our latest round of self-defense ammo ballistic gelatin testing are now live at Lucky Gunner Labs. This time, we tested eight different pocket pistol calibers. In last week’s video, I made some ammo recommendations based on the results from our .22 LR and .22 Magnum tests. This week, I’m looking at what happened in our .32 ACP tests.

I’m not planning to do this for all of the calibers we tested, at least not right away. So if the gel testing stuff isn’t your thing, don’t worry, we’ve got something completely different planned for next time.

But I do want to cover .32 ACP ammunition because I think it’s an under-appreciated caliber for pocket-sized concealed carry. I did a general overview video about .32 ACP last year as part of our pocket pistol series and I briefly covered ballistics. But now we’ve got a lot more data to work with, so let’s dive right in.

As always, our test medium was Clear Ballistics brand synthetic gelatin with a four-layer heavy clothing barrier. We tested eight different loads, each with two pistols — a Kel-Tec P32 with a 2.7-inch barrel and a Beretta Model 81 Cheetah with a 3.8-inch barrel. Those numbers have been rounded up to 3 inches and 4 inches on the labels in our chart.

On average, the ammo we tested increased in velocity by about 129 feet per second with the Beretta versus the Kel-Tec.

For small caliber pistols like .32 ACP, the conventional wisdom is to stick with full metal jacket bullets. They will have a better chance of penetrating. I didn’t really see anything in our test results that made me want to question that practice. Like we’ve seen with most cartridges weaker than 9mm, expanding hollow-points usually cause the bullets to under-penetrate.

Let’s take a look at the chart we’ve got up at Lucky Gunner Labs. I’m going to sort by barrel length so we can see the Kel-Tec results first. 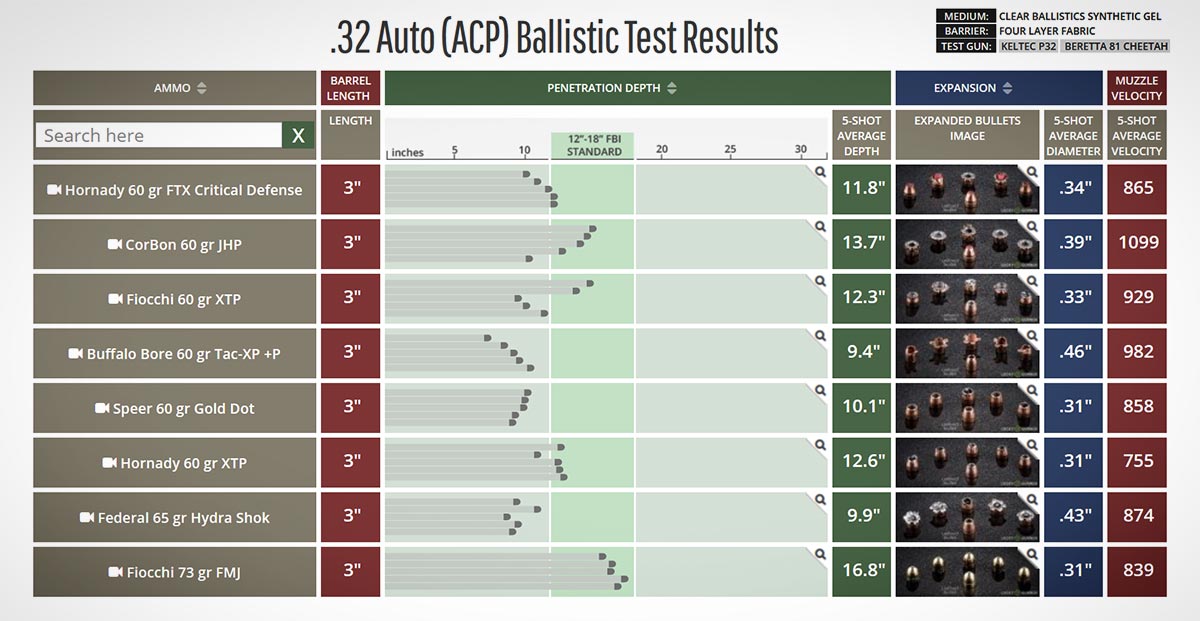 Right off the bat, it’s pretty obvious that the only load that consistently penetrated beyond the ideal 12-inch minimum was the Fiocchi 73-grain full metal jacket.

The CorBon hollow point had the highest velocity by far at 1099 feet per second. Four of the five rounds had good penetration and it looks like they tried to expand, but didn’t quite open up. The one round that did expand also under penetrated. So even though the averages look decent, I probably wouldn’t recommend this one. It’s just too unpredictable. 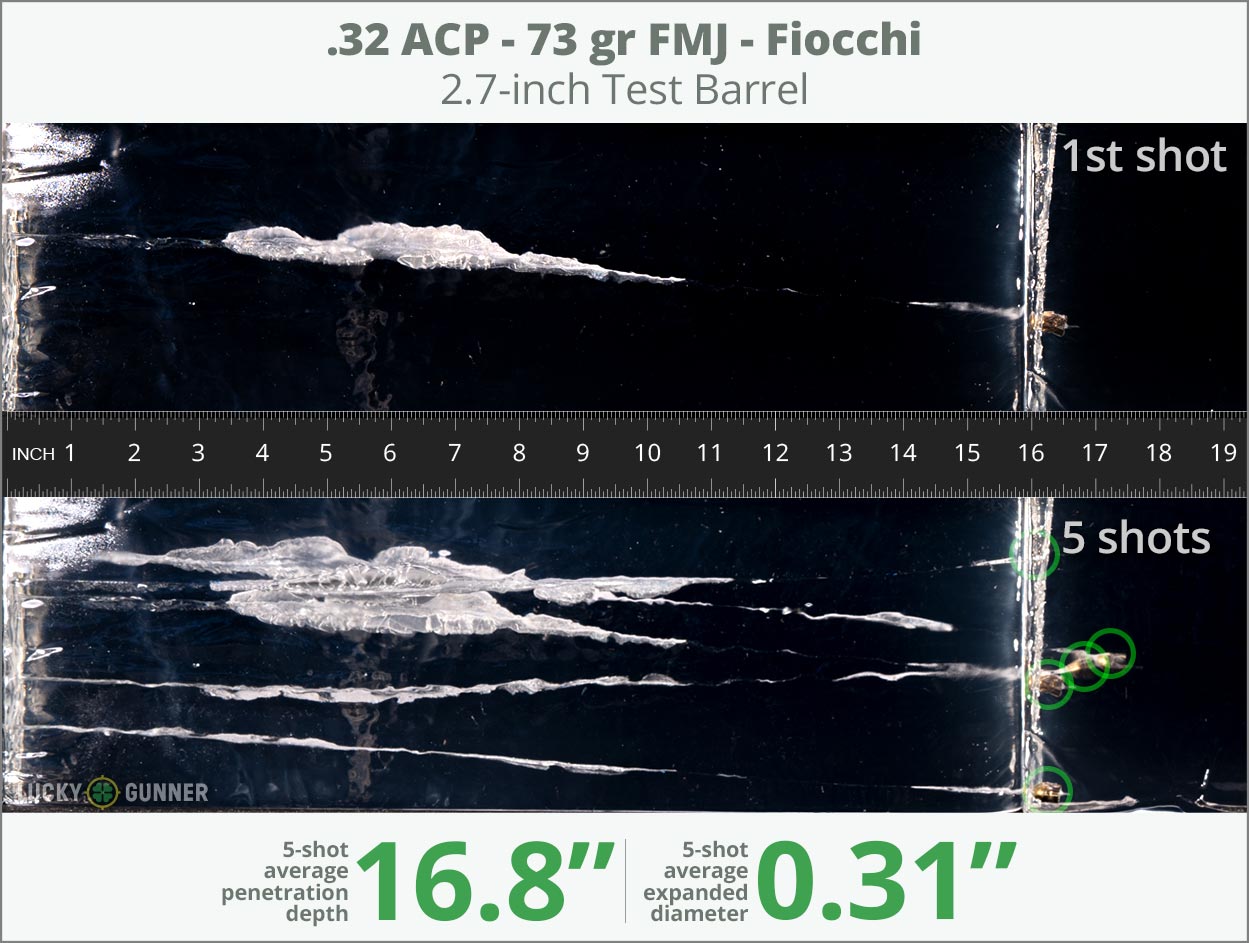 The only other load that looked like it might be a good candidate with the shorter barrel was Hornady XTP. This one was actually the slowest of the eight loads we tested. There was no expansion and one of the five rounds only made it to about 11 inches. There is a case to be made for loads like this because the flatter tip of a hollow-point that fails to expand could theoretically cause more tissue damage than a round nose bullet. But I would always err toward more penetration with these pocket pistol calibers. That’s simply because in the real world, they tend to under-penetrate.

Okay, now let’s see how these rounds did with the longer barrel from the Beretta Model 81. 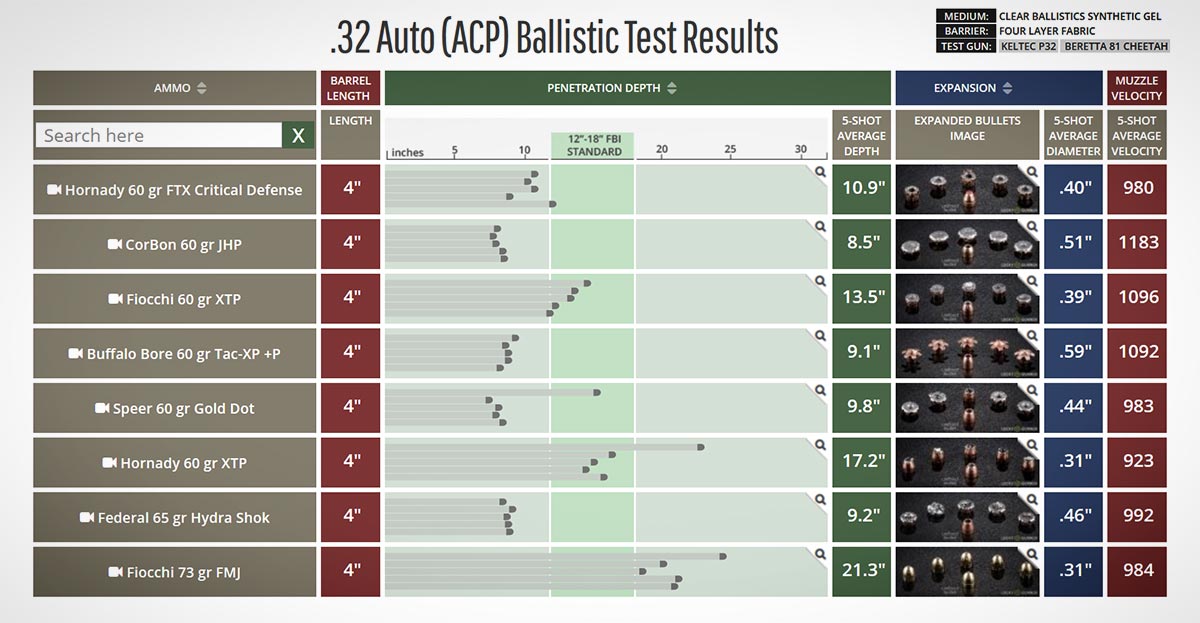 Again, the Fiocchi FMJ is the clear leader in terms of penetration. With the added velocity, these bullets went well past the desired 18-inch maximum. But we’ll talk about that more in just a minute.

The Fiocchi loading of the XTP bullet looked pretty good and even had a little bit of expansion. Hornady doesn’t load their version of the XTP quite as hot. So, there was no expansion with that one. They did penetrate a lot deeper than the Fiocchi XTP. 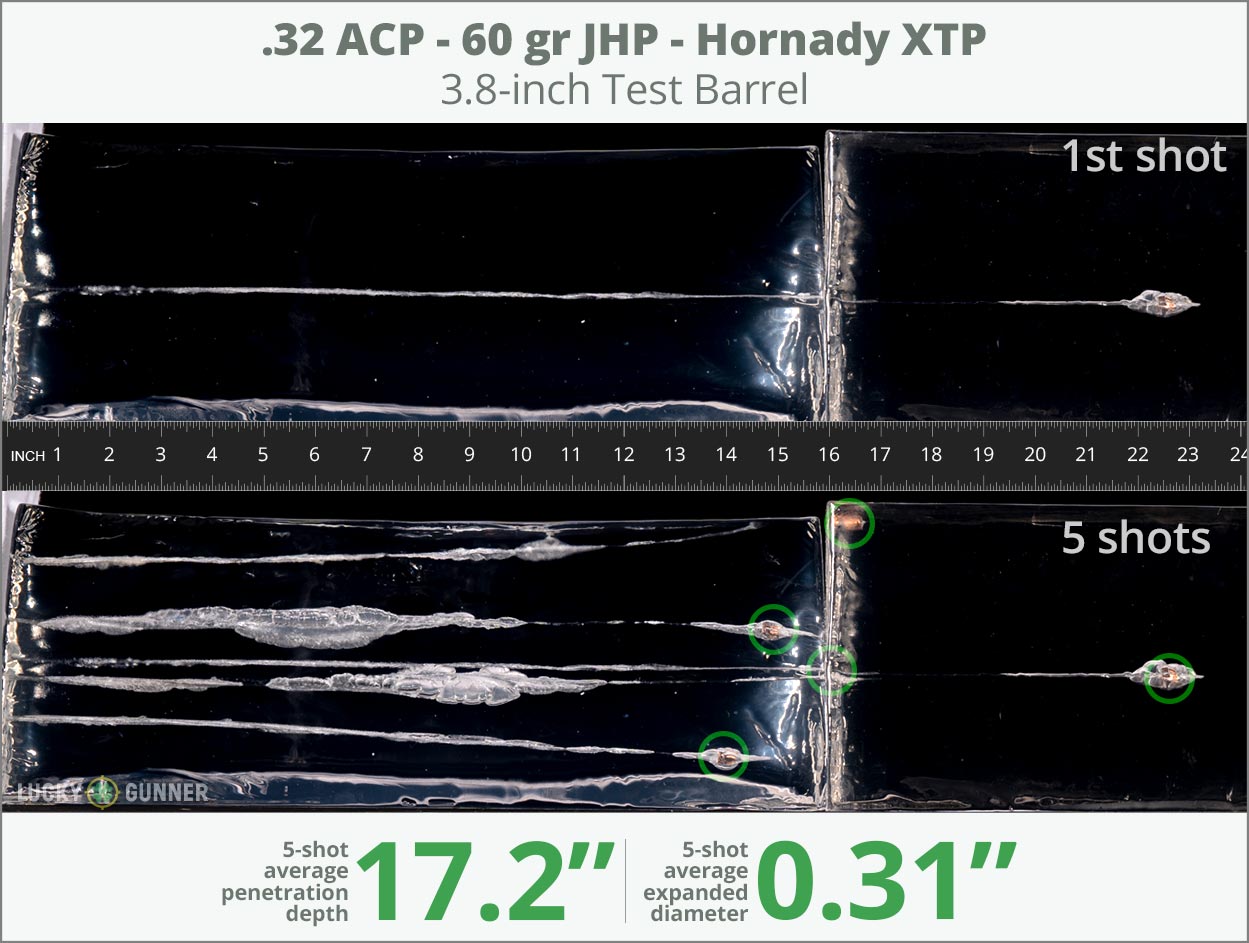 There were a few loads that expanded beautifully like the CorBon, the Federal Hydra-Shok, Hornady Critical Defense, and the Buffalo Bore with the Barnes all-copper bullet. And all of these same loads struggled to make it to just the 10-inch mark. 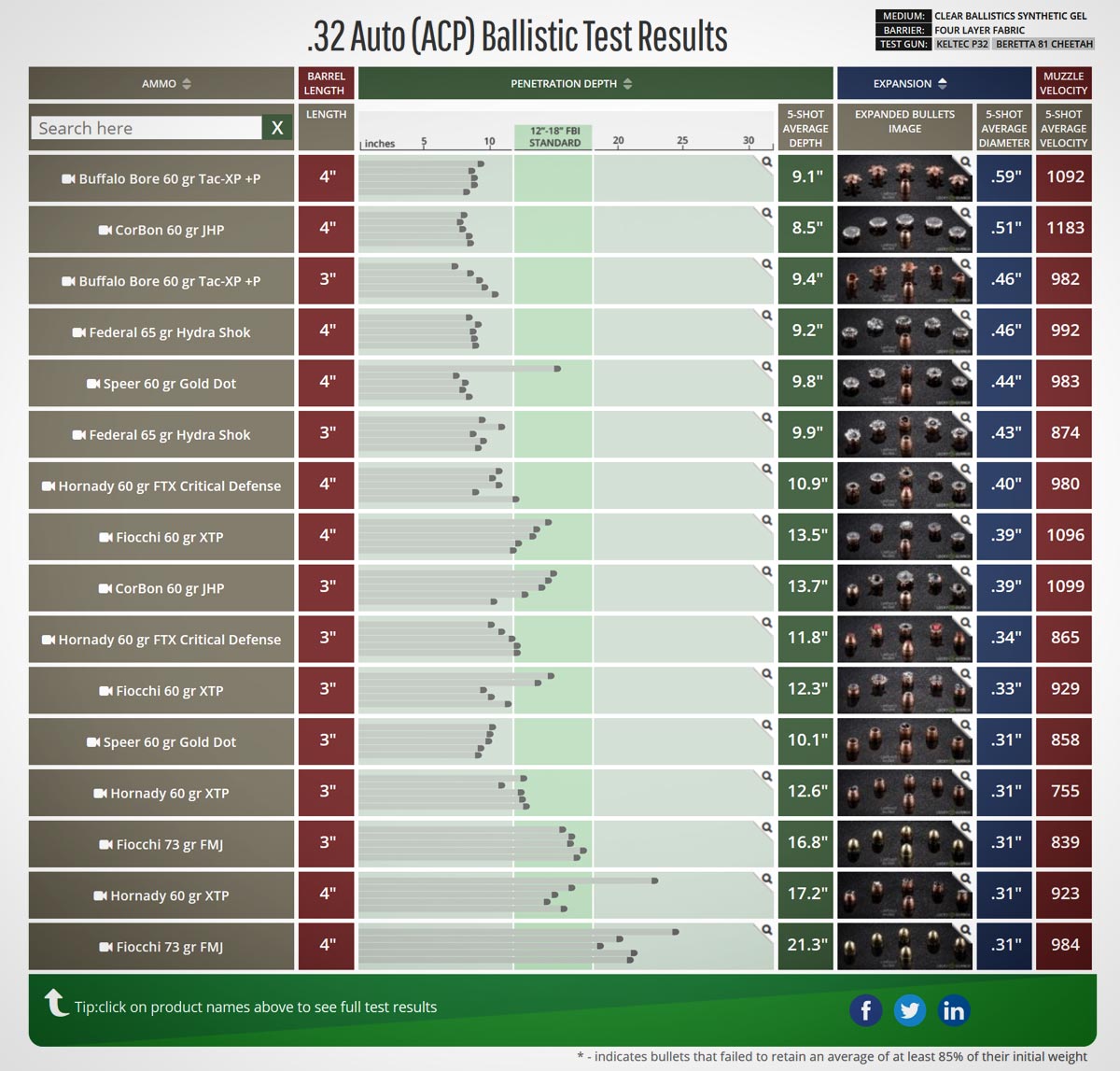 I don’t mean to beat a dead horse. It’s just that no other caliber we’ve tested so far has so clearly illustrated the general rule of thumb that more expansion means less penetration.

How About Full Metal Jacket Loads?

Now let’s come back to this Fiocchi FMJ down here with the 4-inch barrel. We need to talk about over-penetration for a minute. 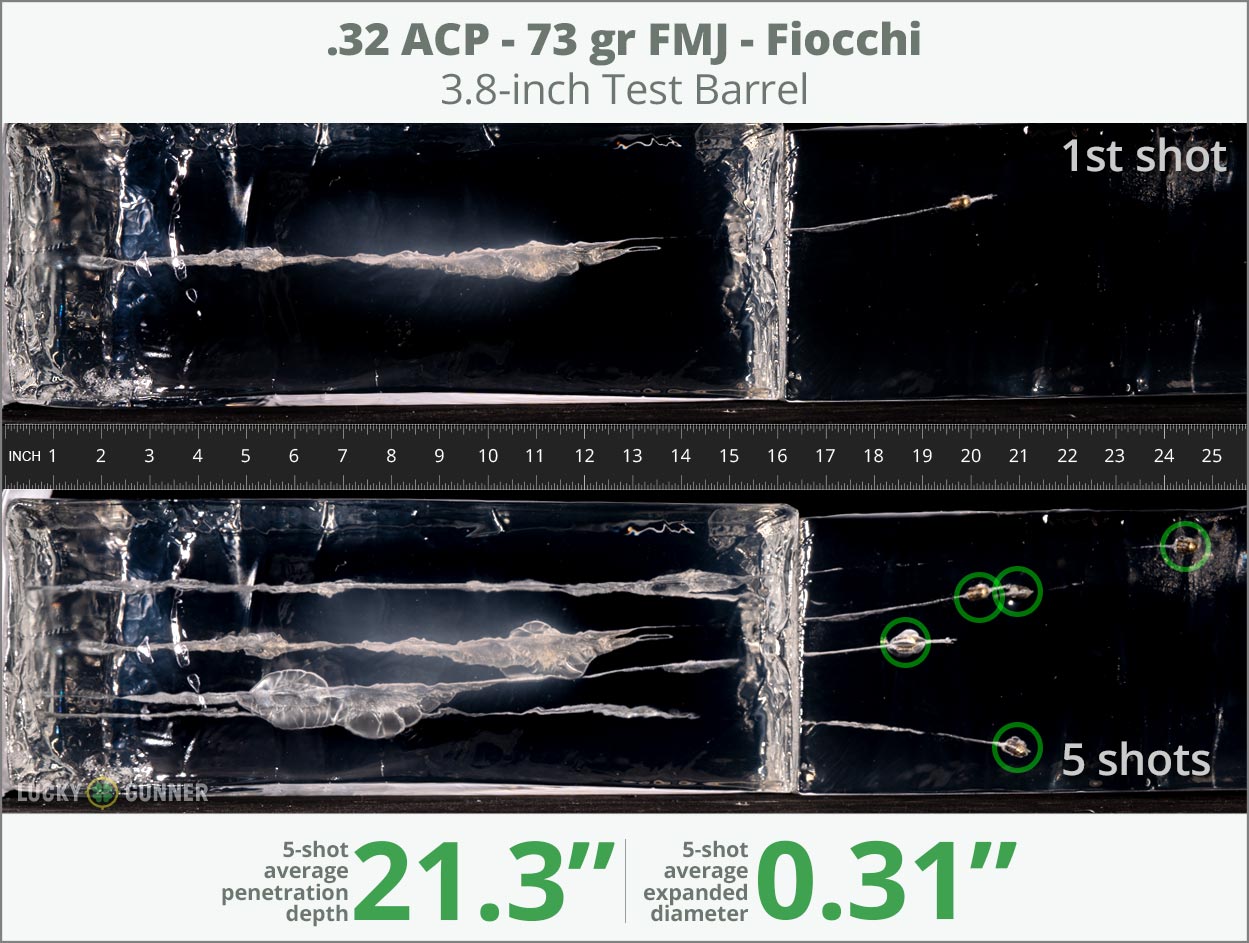 The main reason we don’t typically like to see a lot of penetration beyond 18 inches is because it means the bullet might pass all the way through the intended target and potentially endanger people on the other side. In reality, missing the target completely is a much bigger and more common risk to innocent bystanders. Also, from what I can gather from people who have investigated shootings professionally, it’s actually very rare for a small caliber handgun bullet like a .32 ACP to go all the way through a person’s torso and exit the opposite side. Under-penetration is far more common, partly because slow lightweight bullets are more prone to deviation and deflection, especially if they hit something like bone.

So truly dangerous over-penetration with a small caliber pocket pistol is probably not something we have to worry about too much. I’ve said it before, but keep in mind that 12 to 18 inches of penetration in gelatin is not the equivalent of 12 to 18 inches in living tissue. The gel is a consistent test medium that lets us compare one bullet to another. Historically, bullets that penetrate at least 12 inches in gel have a higher success rate in the real world than those that don’t. Service caliber bullets that go past 18 inches might over penetrate. With a .32 ACP, that’s not as likely.

Besides the ballistics, there’s another good reason to stick with FMJ for .32 ACP that is somewhat unique to this cartridge and that’s the issue of rim lock. I discussed this back in my other .32 ACP video. Rim lock is where the rim of one cartridge in the magazine literally locks into the round below it and causes a failure to feed.

It’s not a common issue with every .32 pistol, but when it does happen, it’s a lot more likely with hollow points because of the shorter overall length. Full metal jacket loads are slightly longer and don’t leave enough room in the magazine body for the rim lock to occur.

Of course, no matter what gun you’ve got, making sure it runs reliably with your carry ammo is a lot more important than terminal ballistics. We only tested one FMJ load this time. However, I wouldn’t be surprised if most of them performed basically the same. I did try a couple of rounds of American Eagle FMJ when I was doing some informal testing in 2019. They penetrated between 16 and 20 inches with the KelTec even though they were about 60 feet per second slower than the Fiocchi FMJ. If you feel like you really just have to have higher velocity ammo, the European and other foreign ammo companies tend to load .32 FMJ a little hotter than the domestic producers.

As always, you can choose from a wide selection of .32 ACP ammo and any other caliber you might need and get it with lightning fast shipping from us at LuckyGunner.com.