Start Shooting Better is back! In this episode, we’re covering the much-requested Fundamentals, Accuracy, and Speed Test, better known as The F.A.S.T. This pistol test (not drill!), developed by the late Todd L. Green, is an excellent way to evaluate your mastery of several of the most important handgun skills with just six rounds.

Details in the video below, or you can scroll down to read the full transcript.

CHRIS: Hey everybody, I’m Chris Baker from LuckyGunner.com, here with John Johnson from Citizens Defense Research. And this is another episode of Start Shooting Better. Yes, we are back. We have not forgotten that a lot of you guys really have been loving these drills and tests that we’ve been doing here and there for the last couple of years. Today, we’re gonna do a really popular one we probably should have done a long time ago: the F.A.S.T. [Fundamentals, Speed, and Accuracy Test]. This was developed by Todd Louis Green several years ago. John, why don’t you give us the course of fire? 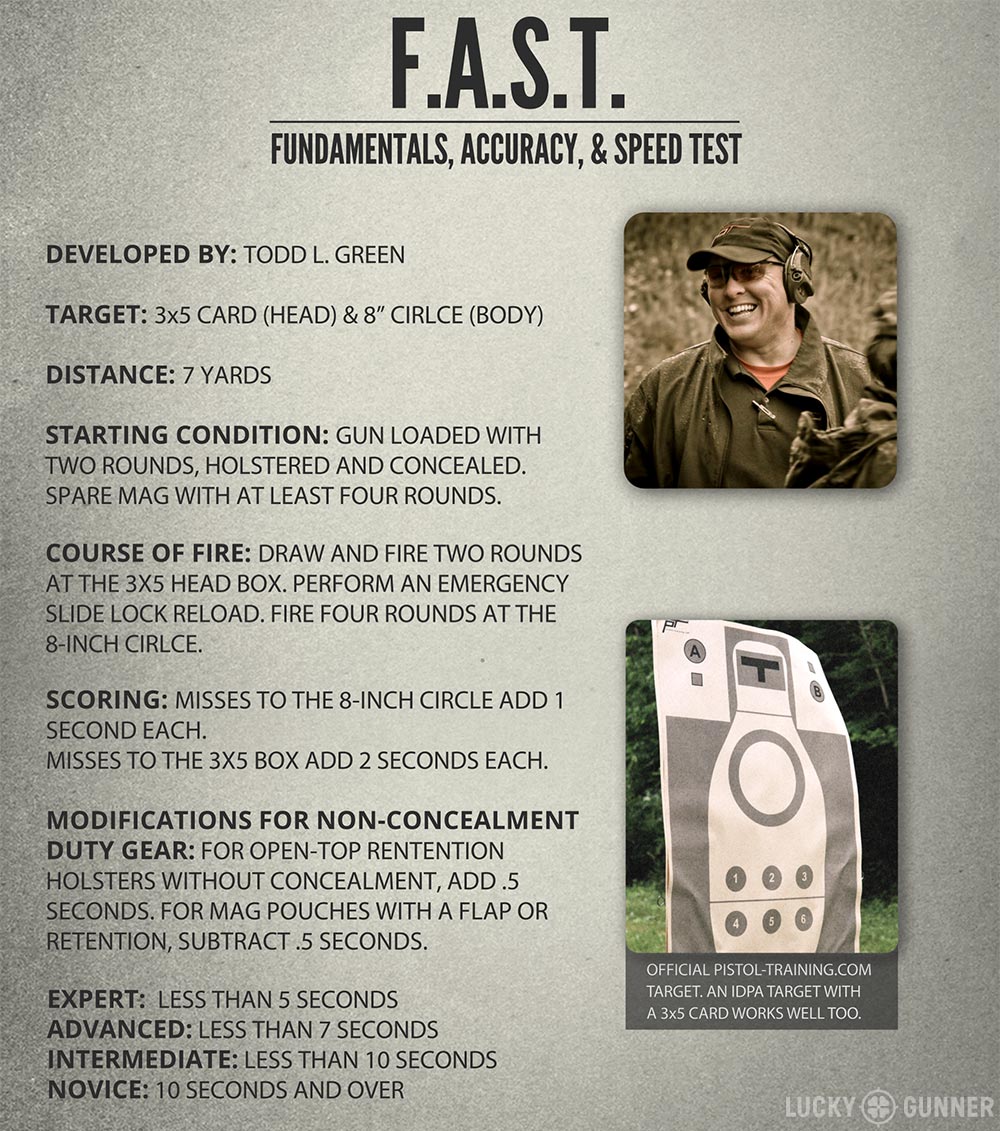 JOHN: Sure. So, the course of fire is actually pretty easy. It’s designed just to be run however you show up. So you step out to [the 7-yard] line either in your normal duty gear or in your concealed carry gear. On the beep, you’re going to draw and fire two rounds to the 3×5 head box at the top of the target. Perform a slide lock reload, then fire four more rounds at the 8-inch circle for a total of six rounds.

CHRIS: So you’ve got two rounds in the gun when you start and a spare mag with at least four rounds in it. The way it’s scored is you’re going to add a full second for any shots outside of the 8-inch circle and two full seconds for any shot that’s out of the 3×5 head box. So basically, any misses are gonna tank your score. You want to shoot it clean — it’s really designed to try and shoot it clean every time.

CHRIS: The way Todd set it up, there were different rankings based on your time. If you’re able to do it in under five seconds, that’s an Expert rating. Under seven seconds is Advanced. Under ten seconds is Intermediate. And over ten seconds is Novice.

This drill sounds simple the way we explain it, but it is not. And for that reason, there was a special award that Todd would give — he passed away a few years ago, by the way — he would give a challenge coin to anyone who could complete the drill clean under five seconds, two times in a class. Now, since he passed away, that duty has been passed on to Ernest Langdon and he now does that test in his class. John and I have both attempted (and failed) to do that multiple times in Ernest’s class.

It’s always really challenging, even if you can do it on that range on a nice day, when you’ve got Ernest standing behind you with the timer and everybody in the class watching you — that’s a different story.

JOHN: I was lucky enough to get to have Todd run me through it once before he passed away. And yeah, it’s an entirely different story. And and what a lot of people get wrong about this, and I know that Todd talked about a lot on pistol-forum.com when he was still alive, is that this isn’t a drill that you go out and run multiple times. This is much more like an assessment to where you show up, you do it cold. You see kind of where you’re at with stuff and specifically what areas need work. And then that’s what you work on.

CHRIS: Right, because it’s real tempting to get out there, you try F.A.S.T. a couple of times, it doesn’t go the way you want, so you just — your inclination is just to do it again and again until you get a score that you’re happy with. And eventually, you will get a score you’re happy with if you do it enough times. But the key to getting better at the F.A.S.T. is not to do the fast over and over. It’s to break it down into its component parts. So you’ve got basically three main components: the presentation to a small target — the three by five. Then the reload. And then four quick shots on a larger target.

JOHN: Specifically if you’re going for a coin, the way to break that down is you essentially need a second and a half presentation to the 3×5, and then you need to run somewhere around a .5 split on that. The gun’s empty and you need to perform an emergency, reload — a slide like reload. You need to be right around a two second reload, which, especially from concealment, is a skill in and of itself.

And then at that point, I know four shots to an 8-inch circle doesn’t sound like a lot. But after you’ve completed those two other things, ramping back up to that sort of cadence of fire can be difficult. It’s easy to either lose control of the gun or not shoot quickly enough. For the time breakdowns on that somewhere right around a .25 split wouldn’t be a bad idea.

If you tie all of those things together, you end up right around 4.75, which is comfortably underneath the 5-second mark for a coin run. Again, none of those things on their own sound — I mean, they are difficult, but they don’t sound impossible. But tying them all together at once on one run, especially under pressure, is exceedingly difficult. And that’s the reason why there are only 19 coins. And Todd was coin number zero. So over the last 13 years, with probably a thousand people at least trying for this coin, there’s there’s 18 people, not counting Todd, that have it.

CHRIS: So this is really a test of unconscious competence. You have to be able to do all of those things without thinking real hard about it.

JOHN: Yeah, and that’s exceedingly difficult. And one of the reasons why it’s difficult is it’s super easy to become focused on the outcome of the test versus just being in the moment of the process. And and that’s why one of the reasons why I like it a lot. It shows you on the paper where your head was at, whether or not you knew that was where you were at. And that’s incredibly useful when you’re trying to get better at something, when you’re trying to find that place of automaticity where you are unconsciously competent, just able to perform these skills on demand.

CHRIS: So let’s talk about our specific performance yesterday. John and I each tried a couple of cold runs at the F.A.S.T. and then we did a few more just to kind of see — what’s the difference between a warmed up performance and a cold performance. So, John, your first run was a 5.66 which is respectable, but you missed one of the body shots. So what do you what do you think happened there? 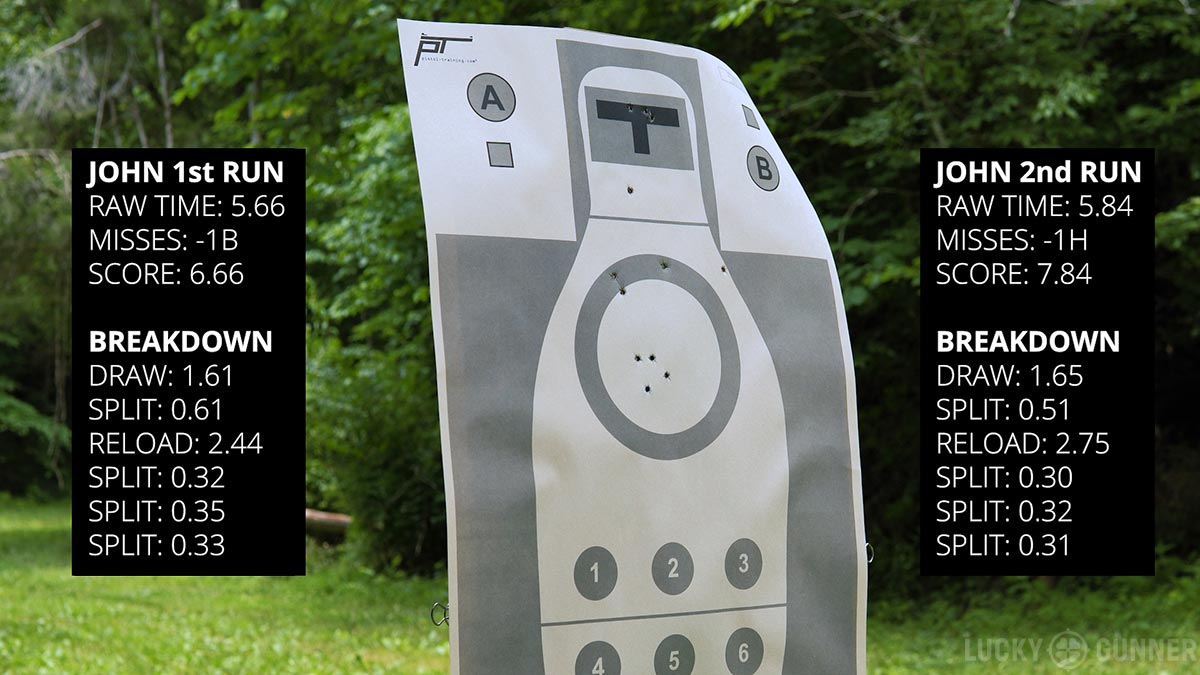 JOHN: Well, what happened there was I was not quite as aggressive as I could have been on the head box. And specifically, I knew the reload was not where it needed to be. So I started to rush, which was the exact opposite thing to do. Then once I caught myself starting to rush, instead of shooting what I was seeing, I tried to slow myself down, which is a mistake. You should regulate speed just based off of what you see, in my opinion. And everything just sort of got out of control there. But, you know, the takeaway for me from that is, again, I was very much trying to get an outcome versus just shooting.

CHRIS: I think that issue of rushing the last four shots is very common. I know I do it a lot. If any of the first part doesn’t go well, if you if you have a fumble on the draw or a slower first shot than you think you should have had or anything goes wrong with the reload — and a lot of things can go wrong with the with the reload — your inclination is just to go, “I’ve got to make up time now.” You start rushing those those body shots. Or you second guess yourself and try really hard not to rush and then you do something that you shouldn’t.

CHRIS: So when I was doing it, my first run was a 6.52. I missed two body shots. My second run, I was determined to do it clean, which I did. I was a little slow, though — 7.32. Nothing wrong with that at all. But it’s not indicative of what I think I’m capable of at this point. But it is a good example of an almost advanced level run. It’s actually still in the intermediate range. 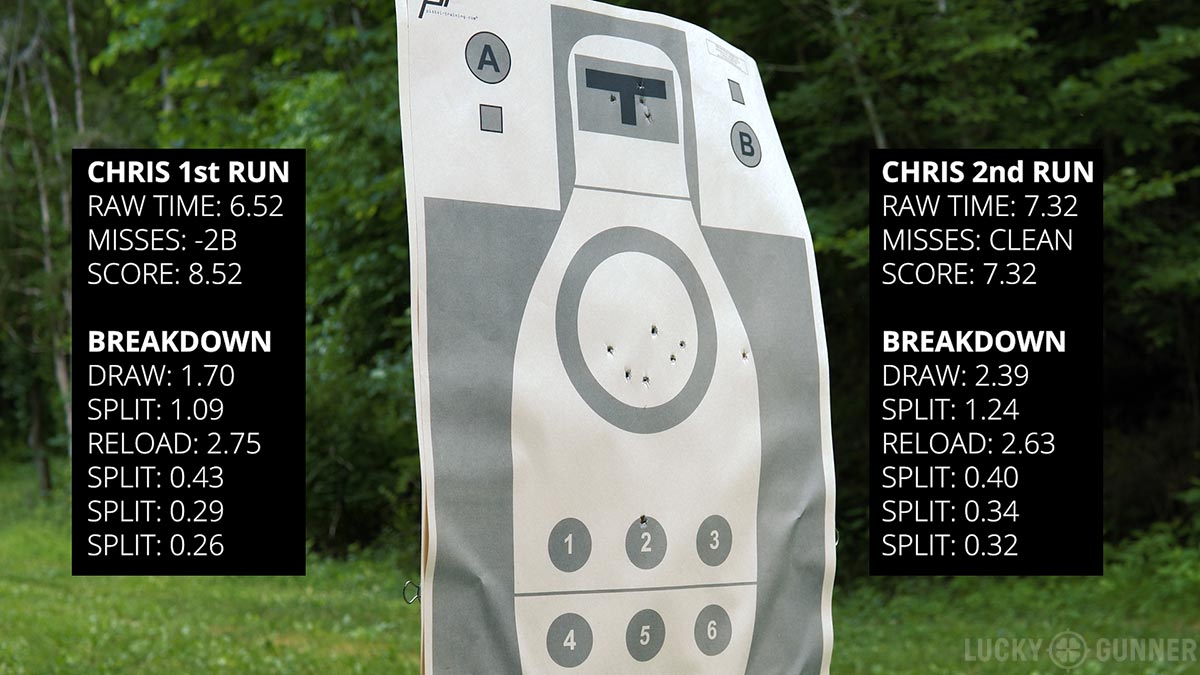 I also did one slower run to demo something closer to a novice-level performance. That was a nine second run. I’ll let you guys look at that. If you’re going at that pace, there is a lot more room for error.

After warming up a little bit, it’s a totally different story. A few minutes later, after just doing a couple of more runs, I did a 5.45 clean, which is pretty good for me. Really, just shaving some time off of that reload would put me almost under the five second mark there. That’s pretty good pacing, otherwise. 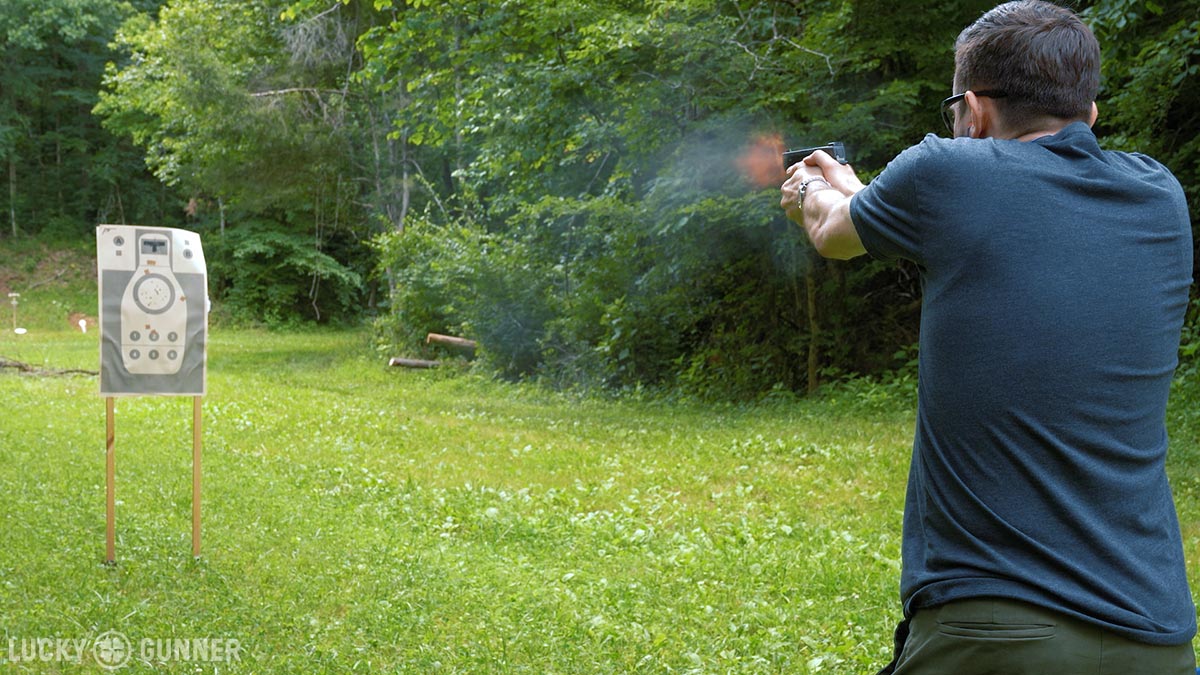 John did the same thing. On a warm run, you got it clean just under five seconds at 4.93. Pretty good run. That’s just the difference between a couple of minutes — less than half a box of ammo — of practice between that on-demand performance and the warm performance.

JOHN: And, you know, if you’re watching the video and you want this to mean something and be something useful for you, just throw it at the start of your range session. Do it twice. See where you’re at. Then leave it alone. Don’t do anything else with it. Do your normal range session after that and then maybe your next range session, skip it. Then, you know, like run it every third or fourth time that you go to the range. Just use it as a measure of growth, not something that you are practicing over and over again because it’s not going to do you as much good then.

If you carry a gun, you should carry pepper spray. So today, we're testing 12 different options for OC/pepper spray...