In a return to our Start Shooting Better Series, we’re looking at the classic Casino Drill, but with a major twist. What happens when you don’t know the course of fire until the instant before you draw the gun? This variant comes from John Hearne, who’s been teaching us the importance of being able to think and shoot (or not shoot) at the same time.

Details are in the video below, or scroll down for the full transcript.

Hey everybody, Chris Baker here from LuckyGunner.com and today I want to talk about a pistol shooting drill that is designed to completely mess with your head.

This drill comes from John Hearne. I’ve mentioned in our last couple of videos that I recently attended a very unique shooting class called Cognitive Pistol and Tactical Anatomy taught by John. Here’s John from our last video explaining some of the “why” behind that class:

“A lot of times when we go to shooting classes, I’m just performing a contrived drill… I know before the drill even starts exactly what I can do. I can prepare in my head exactly what I need to deliver and it’s much easier to access that motor program and just deliver. In the real world, I don’t know what motor program I’m going to need to deliver until the last possible moment…”

So unlike most shooting classes, John’s focused on pairing technical handgun skill with decision making and problem solving. We ran through shooting exercises of increasing complexity that forced us to really think about what we were doing. John has rigged up a remote control system of different colored LED lights. The lights indicated when, where, and how many shots to fire. Sometimes the lights were spread out in opposite corners of the room, or they would even get moved when we weren’t looking.

Ideally, we would incorporate drills like these into our regular practice. The more we are exposed to novel stimuli while we’re shooting, the better prepared we are to deal with other novel stimuli in the future. It’s not really practical for most of us to duplicate the light system John has developed. So I asked if he had any ideas for drills we could do on our own that might involve some mental pressure. He suggested a really interesting variation of the Casino Drill.

If you’re already familiar with the Casino Drill, you can skip ahead to this point in the video to hear about John’s version. If you’re not familiar with it, the Casino Drill was originally developed by Tom Givens and he’s got a good video about it. It’s one of the few commonly taught range drills that does have that combined focus on technical skills and thinking under pressure. We also did a video on the Casino Drill a few years back, but I’ll run through the course of fire again for you.

To shoot a proper Casino Drill, you need a specific target that’s sold by Action Target. It’s called the Discretionary Command Training Target Version 2. There are actually three variants of that target – there’s a 2A, 2B, and a 2C. Tom Givens usually uses 2A in his classes, but you can use the other two as well. If you don’t want to buy a special target just for this drill, I’ve got a printable alternative I’ll tell you about in a minute. It won’t technically be a Casino Drill, but it’s the same basic idea. 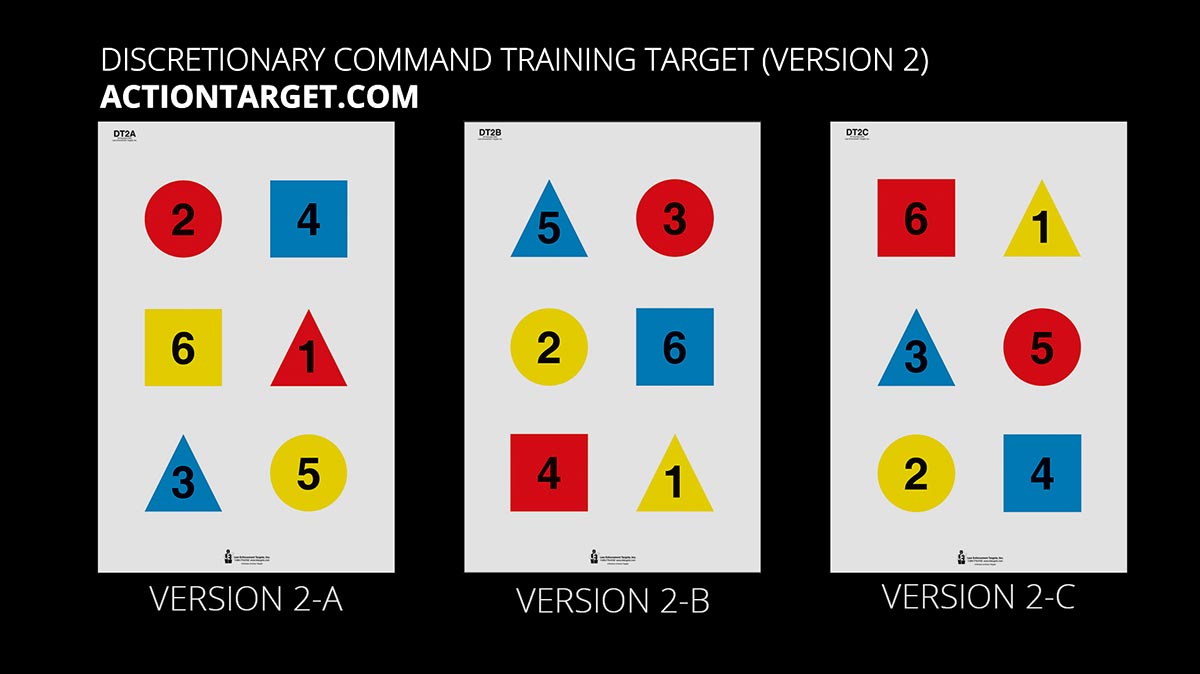 At the signal, draw and fire one round on shape number 1, two rounds on 2, three on 3 and so on until you have six rounds on 6. Reload as needed. It’s called the Casino Drill because you have 21 rounds and the par time is 21 seconds. Add a one second penalty for every missed shot, or any rounds fired out of sequence or at the wrong target.

The two reloads are in there, not because emergency reloading is a super important skill for the real world. The reloads are to mess with your head. They’re there to force you to stop counting your shots and shift your attention to the gun, without forgetting which target you were shooting and how many rounds you have left to fire on it.

It sounds simple, but I’ve seen a lot of much better shooters than myself crash and burn on this drill because they got mixed up and lost count or started shooting things in the wrong order.

Before we get to John’s version of the drill, let’s look at a demo of the original Casino Drill.

We picked a perfect day to go to the range — 92 degrees and super humid. So within a few minutes, everything was drenched in sweat. That adds an extra challenge, especially for a smaller gun like the Sig P365 XL I was using. Recoil control and gun manipulations are always more difficult with sweaty, slippery hands. So I maintained a careful pace throughout the drill and ended up with a clean run of 19.11, just inside the par time by a couple of seconds. 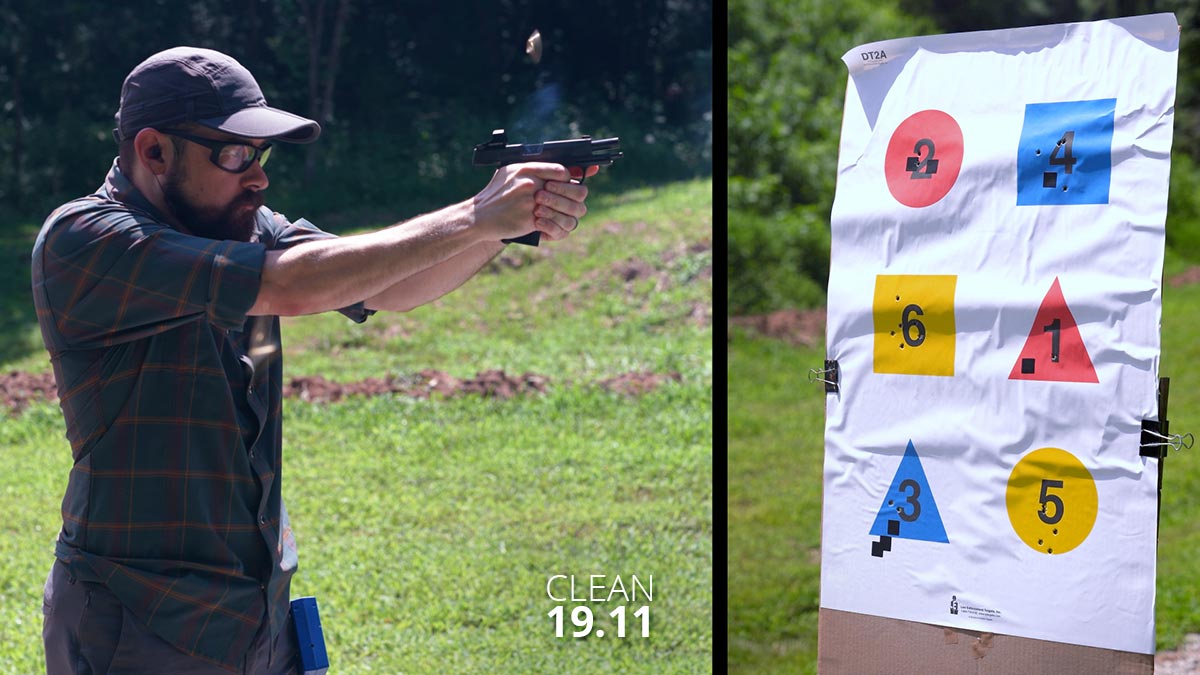 But I’m already familiar with this drill and I know the pattern fairly well. We needed a test subject with no prior exposure to the Casino Drilll to give you a better idea of how it usually goes. Our camera guy Kenneth was volunteered for that job. He bravely agreed to shoot the Casino Drill for the very first time completely cold on camera – no warm-up or anything.

He started out pretty strong except for that miss on number 1. Those triangles will mess you up if you’re not careful. When he got to the reload on number 5, he had a little trouble with his mag pouch and lost count. He put two extra shots on 5, and only had four rounds left for number 6. His time was 22.73 plus a four second penalty for the two misses and two rounds fired out of sequence. 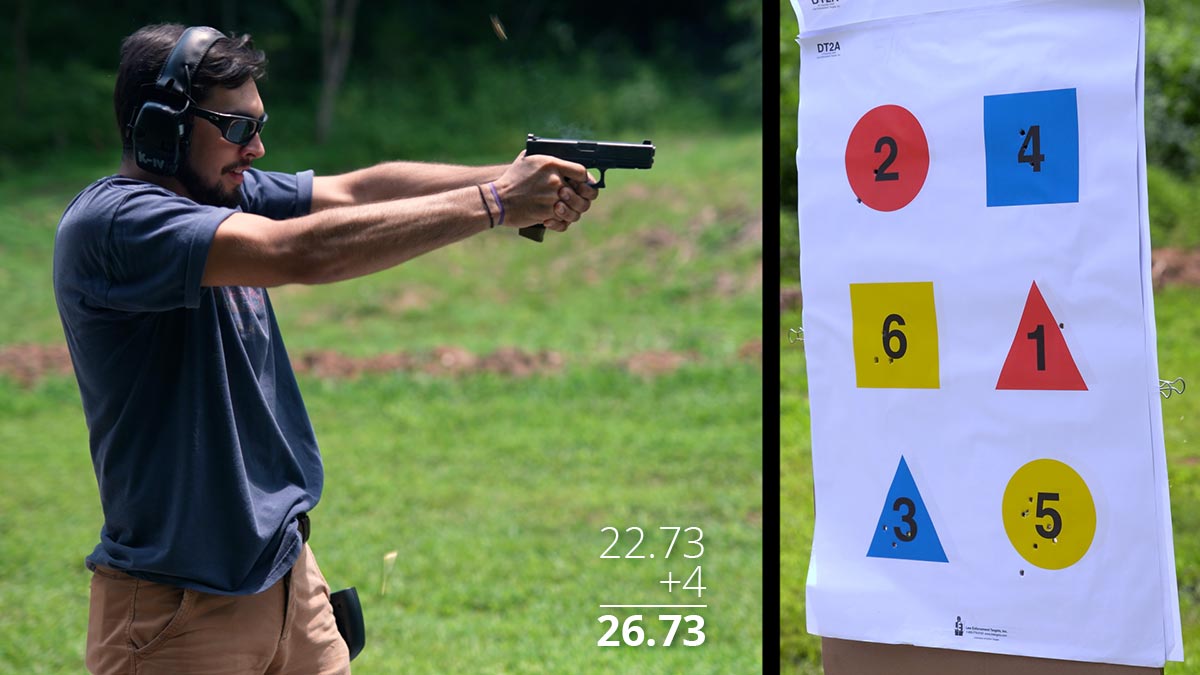 This kind of error is super common with the Casino Drill. It’s a great example of what can happen when we’re under a heavy cognitive load. Maybe you can count your rounds and handle the reloads, but when something unexpected comes up, does that become one too many tasks for your brain to juggle?

Kenneth ran through the Casino Drill a few more times and started getting the hang of it. This run just a couple minutes later looks completely different from his first run. He knows what’s coming next. He shot this one in 18.29 with two misses for a total of 20.29, which is under par.

And that is the downside of the Casino Drill, or any similar exercise. Once you shoot it a few times, you start to memorize where the numbers are and when you’re going to have to reload. It stops being a mental exercise and it very quickly becomes just another technical drill.

There are changes you can make to the course of fire to refresh the novelty factor. You can switch to a different variant of the target. You can shoot the numbers in reverse order. Or you can change up the number of rounds you have loaded in each magazine.

But John Hearne’s variant takes it one step further. I asked if he had a catchy name for it, and he said, “not really, I just think of it as the mega suck version.” I think that’s a pretty fitting name, so we’re calling this The Casino Drill: Mega Suck Edition. 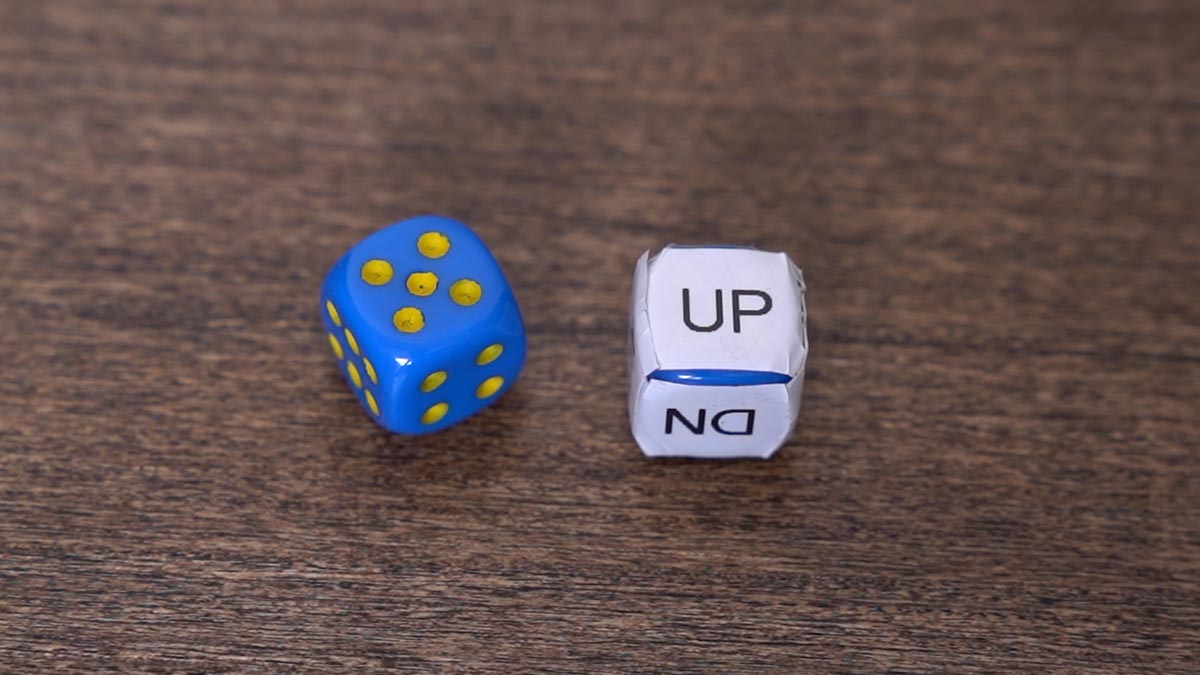 Set up everything else just like the original Casino Drill. Target at five yards. Three mags with seven rounds each. Before the timer goes off, roll the dice, but keep them covered with your hand. When you hear the beep, remove your hand and look at the dice. The numbered die tells you which shape to start on. The up/down die tells you which direction to go. So, for example, if you got 5-Up, you would draw, fire five rounds on #5, six rounds on #6, then you’d go back to one round on #1, and so on. If you got 5-Down, you’d go the other direction – #5, #4, #3, #2, #1, and then end with #6.

The par time is still 21 seconds with a one second penalty for any misses.

On my first attempt at the “Mega Suck Edition,” I rolled 4-up. It took me three full seconds to look at the dice, draw, and get the first round on target, so that’s already pretty slow. I was really conscious of trying not to make any technical errors, and that caused me to move at an even more careful pace than before. Probably more careful than I needed to be, based on the size of the groups I was shooting there. I ended up with a clean run, but it was a little over par at 21.94.

Kenneth rolled 3-up on his first try. He started with a few rough shots, again on one of those tricky triangles. The rest of the run went fairly smoothly until he got to the very end. He forgot which number he needed to end on and had a big pause there before putting those last couple rounds in the #2 circle. That really tanked his score, which was 25.35 including the three misses.

We both improved on our second attempt. I had another clean run with 21.15 and Kenneth had a 21.40 with one out. Both still a little over par, but getting better. Just like the standard Casino Drill, once you do it this way a few times, the novelty starts to wear off. The idea is to keep exposing yourself to new problems to solve while you’re shooting.

Again, you can make some other changes like switching the targets. You can load your magazines with six, seven, and eight rounds and shuffle them instead of seven rounds each. If you really want to be mean to yourself, John suggested randomly loading a dummy round into one of the mags. That way, you can’t just automatically reload when the gun stops working. You have to actually diagnose and fix the problem before you go back to shooting.

Print Your Own Pseudo-Casino Drill Targets

I’m sure you can think of some other things to do with these targets. I like the Casino Drill variations because if you stick with a par time of 21 shots in 21 seconds, that gives you an objective standard to measure your performance against.

If you don’t want to buy these targets, I made some printable decision drill targets you can use (download the PDF here). The shapes on the commercial target are all six by six inches, but I had to shrink them down to get two on a sheet of regular printer paper. I also changed the numbers to Roman numerals just to be a jerk.

If you print out all three pages of the PDF, you’ll have the six shapes you need for a Casino Drill. The shapes are 40% smaller, so you can also reduce the distance to the target by 40%. That will put you at three yards instead of five yards.

It’s not going to be quite the same. The shapes are too close together and they’re not in color. But you do have the benefit of being able to shuffle the pages around, or even change their orientation to keep things interesting. 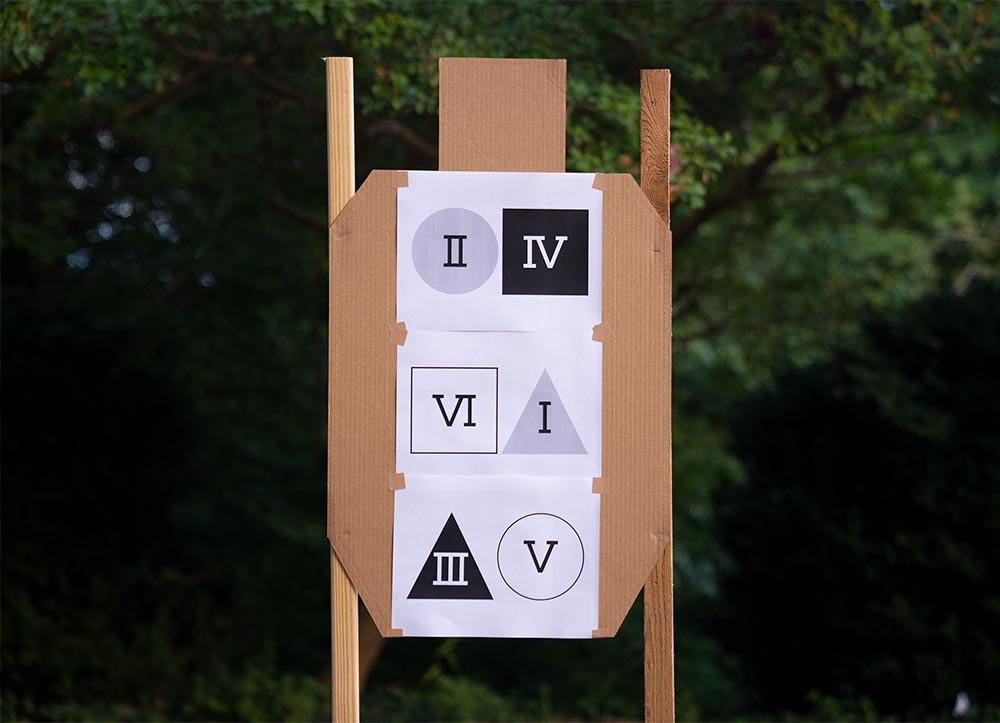 I hope you guys found this helpful. Try out some of these drill variations and let us know how it goes. I’ll leave you with one more tip to make your life better: if you ever use speakerphone in a public place, don’t. From everyone else, please, please stop doing that. Instead, use your phone to quickly and quietly order some ammo from us with lightning fast shipping at LuckyGunner.com.

How to Shoot Better at 25 Yards