SHOT Show is literally a mad circus of new product information. Literally. There’s a lot to take in, and a lot we could tell you guys about. So far, we’ve been passing along info about some of the most popular products from the show, but today I’m sharing a few of my personal picks of 2014, a SHOT Show highlights or awards show, if you will.

These aren’t necessarily the best products, or even the ones that will sell the best. But in the spirit of the Grammys, I’m going to mostly ignore what you want and instead force-feed you my own opinion of what you should be paying attention to from SHOT Show 2014.

TrackingPoint is a company that’s been in the news a lot over the last year because they make the kind of awesome product the media just loves to hate. The TrackingPoint smart rifle is probably the coolest technology I’ve ever seen, but it terrifies a lot of people because it combines two of our society’s most irrational fears; guns and computers.  Basically, the TrackingPoint system takes all of the opportunity for human error out of long range shooting. A computer in the scope tells you where to point the rifle and then fires for you when it’s in just the right spot.

TrackingPoint has a ton of excellent and informative videos about their technology on YouTube, but here’s the basic layman’s breakdown of how it works:

A representative from TrackingPoint walked me through the above steps at demo day at SHOT Show. With the .300 Win Mag bolt gun they had the TrackingPoint rig mounted to, I was able to nail a steel target at 960 yards away. That’s despite high wind, a bullet drop of nearly 20 feet, and my never having fired a rifle at anything even remotely close to that range before. Everything I was seeing through the scope was simultaneously beamed to an iPad, so we caught the whole thing on camera:

I have honestly never been speechless after firing a gun, but all I could muster after firing the TrackingPoint was a very Keanu Reeves-like “… no way.” Of course, I don’t plan on owning one any time soon. The TrackingPoint rep told us the demo rig we used would run about $25,000. Yes, that’s the right number of zeros. Truly awesome technology, but not for the average Joe shooter anytime soon, and that’s why TrackingPoint wins The Coolest Thing I’ll Never Own” Award this year.

You don’t have to look very hard to find criticism of Kel-Tec. It seems that their products with the most potential are either grossly under-produced, functionally problematic, or both. I could go into more detail, but I’m going to let you go ask “the Google” if you want to know more about that. For now, this is Kel-Tec’s award and it’s their moment to shine.

I stopped by Kel-Tec’s booth at SHOT Show to get a glimpse of their upcoming bullpup 5.56 NATO rifles. I didn’t have particularly high expectations, and I won’t say I was blown away, but I’m definitely… intrigued. Every Kel-Tec firearm I’ve been aware of until now has been very liberal in the use of polymer. That’s not necessarily a bad thing, but it has definitely been one of their defining characteristics. Kel-Tec’s two new bullpup rifles are the RDB — which looks a lot like their previous offerings — and the M43, which is the same design as the RDB, but uses metal and wood everywhere the RDB has polymer.

When I saw the M43, I wasn’t even sure whether to think it’s beautiful or hideous. I was just too distracted by the fact that Kel-Tec made a rifle that looks and feels nothing like a Kel-Tec; crisp trigger, usable controls, good balance, and some very nice looking wood. They’re projecting an ETA no earlier than 4th quarter of 2014, so we’ll have to wait a while to see one of these in action, but I have to admit that despite all odds, Kel-Tec has piqued my interest, and that’s saying something.

But that’s not all! I also got to handle the new .22 magnum RMR-30 carbine. Apparently this gun is old news (really old news), but I completely forgot about it since Kel-Tec first announced the prototype back in 2010. With the stock collapsed, it’s incredibly compact at 22.5″ and only weighs 4.2 lbs with a loaded 30-round magazine. It also has top and bottom picatinny rails, left and right-side charging handles, and a 16.1″ factory threaded barrel.  I don’t have any particular need or desire for a .22 magnum rifle, let alone a “tactical” one, but I think I might want an RMR-30 anyway.

As if these two surprises weren’t enough, I also handled a new version of their SU-16C semi-automatic rifle that’s chambered in .300 BLK. Assuming its MSRP is in line with their existing 5.56 SU-16 rifles, it could be an inexpensive way to experiment with the .300 BLK cartridge at a price that’s well below what most AR-15 300 BLK uppers retail for. With all the (mostly justified) frustration leveled at Kel-Tec, it’s easy to forget that they actually have some really cool ideas and designs. This year, I actually got to see some of those designs, earning Kel-Tec the Most Surprising Company Booth Award!

We got to shoot a whole mess of shiny brand new guns at the SHOT Show Industry Range Day but the one that put the biggest grin on my face had nothing to do with a new gun debut. At the PCP/Gorilla Ammo booth, I was handed a Daniel Defense 300 BLK rifle equipped with an AAC SDN-6 suppressor, a Leupold 1-4X optic and a happy switch. I have no idea if I actually hit anything with the bursts of Gorilla 220 grain 300 BLK rounds, but it was awesome anyway.

Full auto is not something we peasants are allowed access to very often and when the opportunity does arise, it’s not usually accompanied by suppressed sub-sonic ammo. So the Fun Gun of the Year Award for 2014 goes to Daniel Defense, with special thanks to PCP/Gorilla Ammo for choosing an awesome gun to show off their ammo. 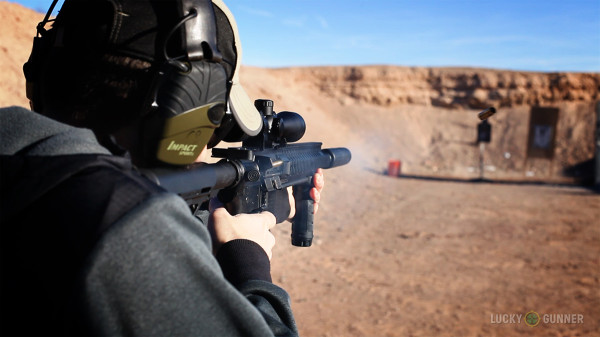 4. Most Interesting Gun Nobody Else Was Talking About Award: Mossberg MVP .308

It seems that Jeff Cooper’s Scout Rifle concept gains newfound popularity every few years or so, but then quietly fades into the background until another round of shooters discover it. I believe the reason for this fluxuation is that the idea of the scout rifle is very appealing on paper, and rifles with scout-style features feel really good in your hand, but most people have no idea what role they actually fill in their personal collection. That’s probably because most of us do not have the same kind of unique lifestyle and life philosophy that Col. Cooper did. For most shooters, the “do everything” rifle of today is the AR-15, not the scout rifle. But that said, a lightweight, short-barreled bolt action is not a bad well-rounded companion for an AR-15, and it fills a few roles the AR doesn’t. Last year, Mossberg made it an even easier decision by creating the MVP series of 5.56/.223 bolt action rifles that use AR-15 style magazines. This year, they’ve followed that up with the new MVP .308 series.

My particular interest is in the Patrol variant of the MVP. It’s got a 16″ threaded bull barrel, iron sights, a scope rail, and the Mossberg “lightning” trigger (very similar to the Savage Accutrigger). And the .308 version accepts not only DPMS/Magpul style .308 mags, but also M1A magazines. Now, I have no need to load a 20 round magazine in a bolt gun, but in general I really like the ease of loading and unloading a scoped bolt action with detachable magazines. The MVP series adds even more convenience by using non-proprietary magazines that are affordable and readily available in capacities of 5, 10, 20, and 25-rounds. Because there’s no provision for a forward mounted optic, the MVP Patrol does not technically meet the definition of a “scout rifle”, but I still think of it as a close competitor to the Ruger Gunsite Scout rifle. Owners of the 5.56/.223 version of the MVP have had good things to say about it, and I’d jump at the chance to give the .308 version a try. If there’s enough interest from Lounge readers, maybe we’ll do a side by side comparison of the MVP Patrol and the Ruger Scout. What do you guys think?

The entire MVP series deserves a little more attention but folks at SHOT weren’t exactly clamoring to get their hands on one (despite the scarce availability of both the 5.56 and .308 MVP Patrol models), and that’s why it wins The Most Interesting Gun Nobody Else Was Talking About Award. 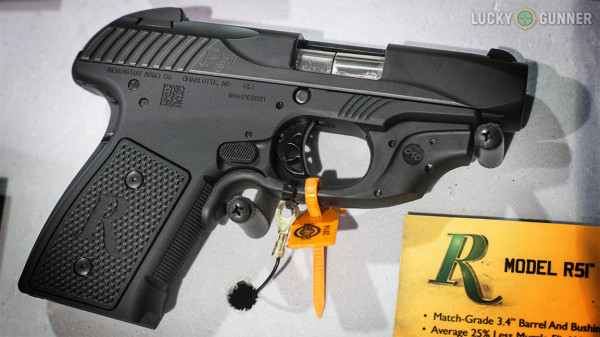 I’ve already made my thoughts on the new Remington R-51 known in a post earlier this week. This little pistol has a lot going for it, and is a breath of fresh air at least in terms of bringing something new to the market that isn’t cost prohibitive or purely novelty-driven. There have been plenty of people bashing its looks, but just as many folks find its unusual shape to be appealing in a classy and un-tactical kind of way. My wife, who always scoffs at hideous pink paint jobs and other “girl-gun” gimmicks, thinks the R-51 could easily be marketed to women like herself. Slap a set of wood grips on there and it appeals to both women and men who are drawn more to the classic look of the Colt 1903 or the Walther PPK than they are stealth-black tactical polymer.

And now the “but”. With the very attractive MSRP of $389, this pistol will undoubtedly sell very well, but I’m having a really hard time believing that it will be all it could have been when produced at this price. I really like the idea of almost everything about this pistol. It’s the execution that concerns me. If Remington was offering this as a high-end premium carry gun at $689, they wouldn’t sell nearly as many, but they could probably offer a much more refined version of the concept. At the current price point, it seems like more of an “everyman” carry gun that may or may not function well enough for that role despite its concept and appearance hinting at higher aspirations.

So in the end, I have two hopes for the R-51. The first is that Remington has somehow managed to defy all odds and logic and mass-produce a unique design with above-average consistency and refinement at a below-average price. My more realistic second hope is that the popularity of the R-51 leads to plenty of third party aftermarket options for improved drop-in parts and custom work to get the R-51 up to its full potential. My feelings for the R-51 are something like a parent watching their kid go on stage to perform even though they know Junior hasn’t learned all his lines, and that’s why the R-51 gets the “I Really Want To Like You, But…” Award for 2014.

What did We Miss in these SHOT Show Hightlights?

Now that most of the SHOT Show coverage for 2014 has died down and the gun-ternet is swelling with opinions, first impressions, and previews, what do you have your eye on? Did we skip any of the major new products that you’ve been watching? What new guns do you want to see us review here on the Lounge? Let us know in the comments or drop me a note on the contact page and we’ll see what we can do.