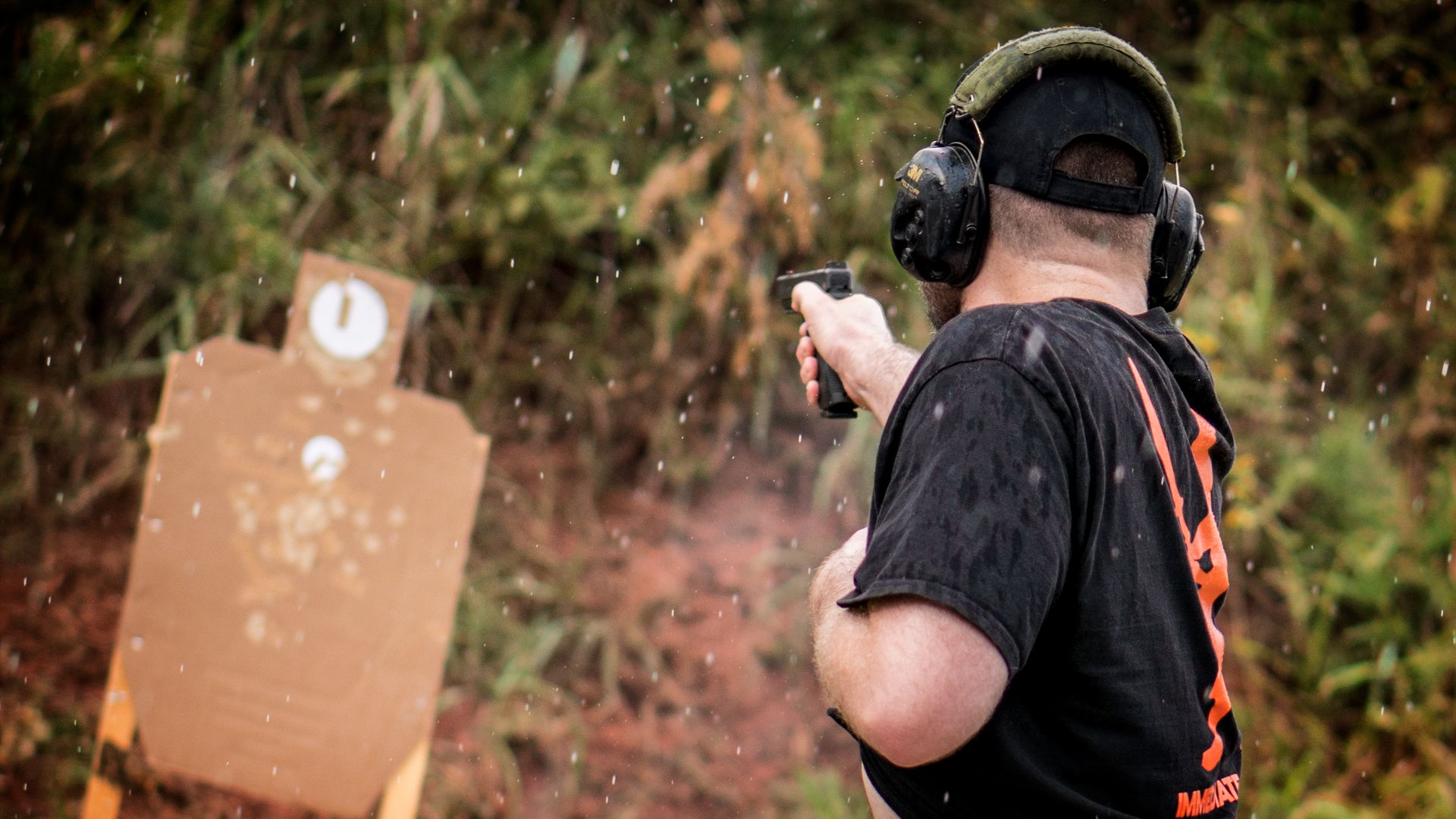 Earlier this month, I had a chance to train with Gabe White, who is easily one of the most technically proficient handgun shooters in the self-defense training community. Even though this was the most thought-provoking out of the dozens of handgun classes I’ve attended over the last few years, many of the lessons I learned are a bit abstract in nature. That means it’s not going to be as easy for me to translate those lessons into little “knowledge nuggets” that I can weave into future videos and articles like I normally do.

So instead, I’ve attempted to share my impressions from the class in a slightly less structured format than what I normally do here. Details are in the video below, or keep scrolling to find the full transcript. Following the transcript, you’ll find a list of the drills we were tested on in Gabe’s class along with the scores required on those drills to earn one of Gabe’s coveted performance awards.

Hey guys, I am Chris from Lucky Gunner and I thought I would try something just a little different today. I was able to take a class a couple of weekends ago with Gabe White. It was a phenomenal class and I learned a ton of stuff. What I normally do with this kind of thing when I go to different training events is take a couple of lessons that I learned and incorporate them into other videos over a period of time. I’ll probably still do that with this class, but there was just so much from this course that was either new to me or unique or presented in a unique way that I wanted to go ahead and share a few thoughts off the top of my head while it’s all still fairly fresh in my mind.

If you don’t know who Gabe White is, he is a fantastic shooter who has developed a reputation as the guy in USPSA who is competing with just his regular everyday carry gear. So he’s shooting from concealment in a league that doesn’t require it and he’s shooting against guys who are using tricked-out race guns and he’s just got a vanilla Glock with very few modifications on it. Even though he’s intentionally handicapped himself that way, he’s still managed to compete at some of the highest levels of USPSA. So that’s kind of what he’s known for. He’s also an instructor. He’s been teaching up in the Pacific Northwest where he’s from for a few years. Just recently, he’s started doing more classes on the road. He’s traveling around the country and offering classes in different places on the weekends.

There were a few different things about this class that made it a little different from what you typically see in a defensive shooting class. Gabe talked about one of those things right at the beginning and that is the fact that most classes have a focus on technique and procedure but his class his more about building technical skill. What he means by that is — you go to most shooting classes and it’s about how to do stuff. Like how to draw from a holster and how to reload. While there was a little of that in Gabe’s class, the real focus was on pushing yourself to get better. Gabe’s perspective is that he was seeing a lot of really high levels of performance in the competition world and he wanted to take some of those lessons and apply them to the self-defense world.

Another unique thing about this particular class was the overall skill level of the other students in the class. Something that kept coming up in conversations throughout the weekend was just how good everyone was. Gabe’s got some standards that are outlined before you even sign up for the class for what he expects of students before they come. It’s not a beginner level class, obviously, and there were some standards you were expected to be able to meet before you showed up, but everyone in the class greatly exceeded those standards. It was a very motivated group of shooters and that’s really cool to be around for a whole weekend. It’s both encouraging and humbling, especially when — you know, there were several shooters there who are better than I am, but they weren’t satisfied with that level of performance. They wanted to be even better still.

So I really felt that push which comes back to another topic that Gabe talked about in his lecture and is also something I’ve been reading about a lot lately outside of a shooting context entirely, having nothing to do with guns at all, and that’s the idea that in our culture, it’s very common and easy, when we encounter someone who’s performing at a very high level to sort of dismiss that ability to some degree by talking about how talented that person must be or what kind of innate ability they must have. There might be a kernel of truth to that, but I really don’t think it’s a helpful mindset, especially when it comes to a pursuit we’re trying to do ourselves. Whether it’s shooting or music or some kind of job skill or an athletic thing — if we dismiss these high levels of performance as being attributed to a person’s talent or something that we just don’t have, it kind of lets us off the hook and gives us an excuse to not work as hard.

With shooting, we’re not talking about telling a person who’s five feet tall, “you can dunk someday if you just work at hit hard enough!” because while there is some physicality to shooting, most people who are shooting at a really high level aren’t doing it because they were born with some sort of natural talent the rest of us don’t have.

This point was really driven home for me during this class by being around guys like Gabe and some of the other students in the class. Gabe, just a few years ago, was a fairly average shooter and he got where he is now by working really hard. And he’s got a day job, he’s got a family, he’s not working in the shooting industry at all. He just found time to put in the hours and do some very intentional, focused practice over a few years to get where he is today.

So rather than go along with this mindset when we see someone who’s performing at a really high level that it’s just attributed to some kind of innate ability or talent that we may or may not have, I think it’s a lot more helpful to develop a mindset that says, number one, it’s possible for a “Regular Joe” to reach these levels of performance and number two, we just have to have a mindset that we’re willing to work as hard as is necessary in order to reach those goals.

Gabe has even taken this idea to the next level and has been challenging some assumptions in the defensive world about what humans are capable of under stress. A great example of this is his work on shooting on the run. There’s a debate in the tactical world about whether you should ever shoot and move at the same time or whether you should shoot first and then move or move and then shoot and you can go in circles all day on the topic. But no one else that I know of is talking about shooting and running at the same time. It’s accepted that that’s not something you can do if you actually want to expect to hit the target. But Gabe started working on it and… he’s doing it. He’s gotten pretty good at hitting fairly small targets like bowling pins and tennis balls while running at the same time.

He spent a good chunk of class showing us how to do this and within just a few minutes of coaching each student individually, we were all able to get fairly decent hits on target while moving at a pretty good pace. It’s an idea that’s just not entertained very often in the defensive world, but Gabe’s proven that it’s really not that hard to do if you’re starting with someone who’s already a decent shooter.

So overall, it was a phenomenal weekend and I learned a ton of stuff. I picked up a lot of tools that I’m going to be able to use in my practice so I can get better. And it was just a good time for me to get pushed toward higher levels of performance.

One of the tools that Gabe uses to motivate students is a series of drills that he tests each student on. During the class, each individual student is tested while everyone else is watching and there are different accuracy and time standards that you have to meet in order to earn different awards Gabe has laid out. I will list those standards our website if you want to know how you measure up [see the chart below for those standards]. It’s good way to see where your ability level is and a way to track your progress over time.

Also, I was recently the guest on Ballstic Radio. You can listen to that here. It’s episode number 225 or you can get it on iTunes or whatever app you use to get your podcasts.

And one last thing, please keep in mind if you want to support what we’re doing here in these videos and our blog, you can buy your ammo from Lucky Gunner. I would consider it a personal favor and would really appreciate it.

In Gabe White’s Pistol Shooting Solutions class, every student is tested on a series of four drills spread out over the two days. Students shoot each drill twice for score. The best four of each student’s eight scores count toward earning a performance award. These awards come in the form of three custom pins featuring the Gabe White Training logo, each with a different color background. Here are the different pins along with Gabe’s description of each level:

None of the pins are easy to earn, especially on demand in a class under the watchful eye of the instructor and all of your fellow students. In our class, all but one of the 14 students earned a pin, but as noted above, our class had an unusually high percentage of good shooters. I came away with a Dark Pin, having narrowly missed earning a Light Pin by one dropped shot on a drill that should have been well within my ability. Performance stress makes a big difference!

Only one student earned a Turbo Pin, which was just the second Turbo ever awarded in any of Gabe’s classes (a third student has since earned a Turbo pin, but it remains a rare achievement).

I’ve outlined the drills, instructions, and the time required on each drill to have the score count toward one of the awards. Try it yourself and see how you measure up! I think the time standards for the Bill Drill are the hardest to meet and the Split Bill Drill seems the easiest, but it might work out differently for you. When comparing your times to Gabe’s standards, don’t forget to subtract a quarter second if you’re shooting from concealment.

Target: USPSA or IDPA target with 3×5 card or 4-inch circle added to the head box.

Distance: 7 yards for all drills

Starting Position: Hands at sides, hands together high in front of the torso (prayer-type position), or hands high at surrender position

Equipment: The time standards below are for open-carried non-retention gear. Concealment or duty gear with retention gets a -.25 second bonus on all drills