You’ll Shoot Your Eye Out, Kid: Use Good Eye Protection

Christmas is coming up in just a few weeks, so I thought it might be a good time to talk about some gift ideas for shooters. For the non-shooters in our lives, we can be a difficult group to shop for. You might receive a gun as a gift every once in awhile if somebody really likes you, but in other cases, people often seem to be at a loss for what to get for the average shooting hobbyist. That’s how we end up with novel, but mostly useless stuff like bullet-shaped ice cube trays and chocolate Glocks.

Of course, I wouldn’t turn down a chocolate Glock, but for the more practically-minded shooter, there might be some better gift options. When it’s time to drop a hint about what you might like to find under the tree, how about upgrading your range gear? I get a lot of questions from readers and viewers about the gear I’m using at the range in our videos. For the next few posts, I’ll be sharing details about that gear, and maybe it’ll give you some ideas. First up is eye protection. Details are in the video below, or scroll on down to read the full transcript.

I’m always surprised at how often I see someone at the range who is a regular shooter, but they’re still using the flimsy eye and ear protection and other cheap range gear from the big box store. That stuff can work fine for a while, especially if you’re just getting started, but I’ve found my overall shooting experience is much more enjoyable (not to mention potentially safer) if I have some decent range gear. So, for the next week or two, I’m going to post a few quick videos, each dedicated to one item from my personal list of most useful range gear. This isn’t stuff we sell, so I don’t have any vested interest in it personally, it’s just stuff that I like.

Today I’m going to talk about eye protection. Any time one of our videos includes footage of me shooting, at least a couple of people ask what kind of shooting glasses I’m using. The ones I use are from Smith Optics and the model name is the Chamber Tactical. Actually, it says Chamber Tactical here on the glasses, but on Smith’s website they’re called the Chamber Elite. So, Chamber Elite Tactical, I guess. I like them because they’re comfortable and durable. They cover the sides, which is really important to keep anything from getting in there that can hit my eye from an angle. I also like that they cover a lot of area but they don’t feel huge like a lot of the glasses with the single piece wraparound lens — they seem to fit my face better than that style. These are available with clear lenses, or you can get them tinted. The sunglasses I use at the range are actually identical to these, just with dark lenses. 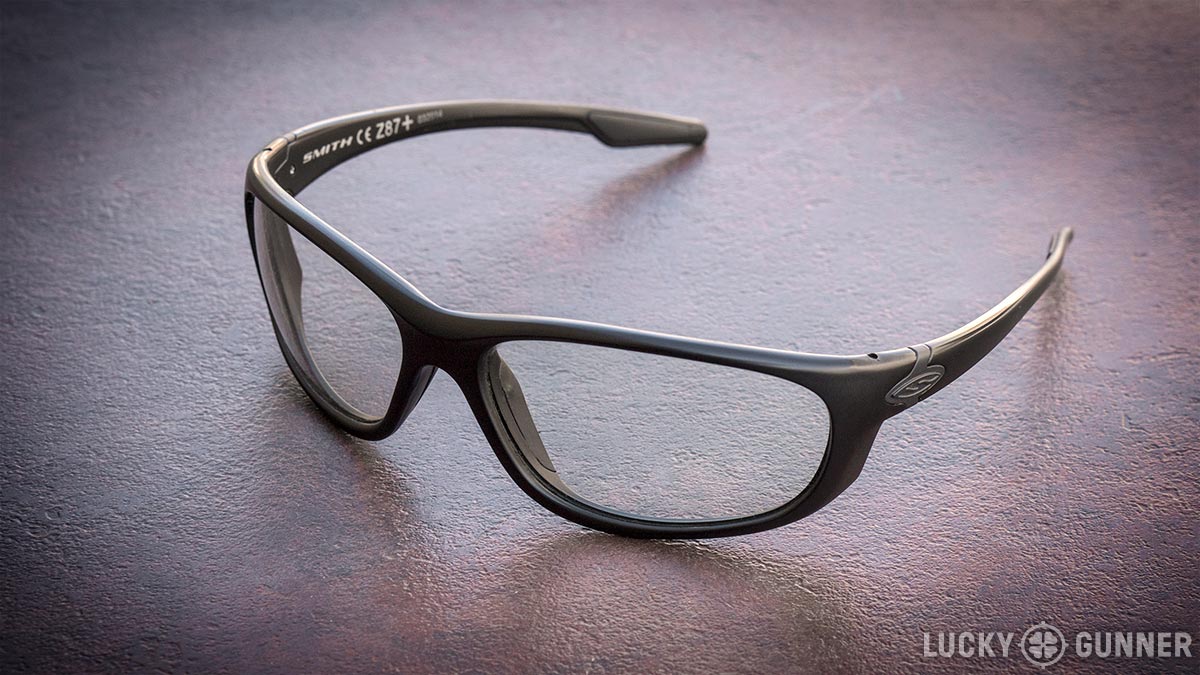 They do fog up occasionally, especially when it’s really humid outside, which is not unusual in the summer here in Tennessee, but I haven’t found any glasses that never fog up, so that’s not surprising. When I have trouble with that, I just use some anti-fog spray. This one is called Quick Spit. It works pretty well. Just spray a little onto the inside of the lens and rub it around with a cloth and your glasses will stay clear for about the next 30 minutes to an hour.

One last important thing I want to mention about these glasses is the impact rating. The Smith Chamber Elite glasses meet both the industrial (ANSI Z87+) and the military (MIL-PRF-31013) impact standards for eye protection. Most of the cheaper eye protection will have the Z87+ industrial rating, which is fine for protection from stuff like debris coming out of the action or flying brass cases — the most common stuff you’re likely to run into at the range. But worst case scenario, if you catch a piece of a ricochet, or you have a catastrophic malfunction with a gun you’re shooting, that Z87 standard is not really meaningful. To pass that standard, the lens has to withstand the impact from a .25″ steel ball moving at 150 feet per second. The military standard involves a .15″ steel projectile fired at 650 feet per second, and that’s a lot closer to the kind of uncommon, but not unheard of risks we want to be prepared for at a shooting range.

So, especially for you guys who are at the range a lot, look for shooting glasses that meet that military standard. You can find cheap glasses with the military rating, but I can’t guarantee they’re going to be as comfortable or last as long as some of the more moderately priced options. With Christmas coming up, a nice pair of shooting glasses might be a good gift idea. They would go really great with some ammo (because who doesn’t need ammo?) and, of course, you can get all of the most popular brands and calibers with lightning fast shipping from us at LuckyGunner.com.

How to Shoot Better at 25 Yards

Revolvers fail, too. I feel like I'm starting to sound like a broken record at this point, but I'll probably...