Throughout our whole series of articles and videos on defensive shotguns that we ran back in 2015-16, there was very little mention of 20 gauge shotguns. We didn’t do this intentionally to discourage anyone from using a 20 gauge, or because we dislike it. As I’ll explain below, 20 gauge isn’t bad for personal protection, it’s just that life is generally much easier if you’re a 12 gauge owner. Details are in the video, or scroll down to read the full transcript.

It’s always been overshadowed by the more popular and more powerful 12 gauge, but there’s nothing wrong with relying on a 20 gauge shotgun to defend your home. At close range, 20 gauge buckshot is typically just as effective as 12 gauge, but it can have a lot less recoil. Less recoil usually leads to better shot placement, and for a lot of people, it also means they are more likely to practice. Normally, I’m a big fan of this kind of thing. If you can give up a small perceived ballistic advantage and in exchange, get the ability shoot the gun better, that’s a worthwhile trade-off. But even so, I don’t usually recommend a 20 gauge shotgun over a 12 gauge for home defense. And not because it isn’t powerful enough. It has a lot more to do with the lack of industry support for the 20 gauge. The shotguns you can buy today that are set up for self-defense are almost all based on shotguns used by law enforcement and the military. For the last century or more, almost 100% of their shotguns have been 12 gauge. So all of the firearm industry’s research and new technology for fighting shotguns has been devoted to the 12 gauge, not 20 gauge.

It’s not really all that popular in the general consumer market, either. Here at Lucky Gunner, we sell about 10 times more 12 gauge shells than 20 gauge. It might be the second most common size of shotgun shell, but it’s still not especially popular. So between that, and the lack of R&D, there’s really not much incentive for the gun and ammo companies to support 20 gauge. It’s primarily viewed as something for young hunters who need a shotgun with a little less weight and recoil than their dad’s. As a result, it’s kind of an uphill struggle to put together a 20 gauge shotgun that’s optimized for home defense. Ideally, you want a short 18-inch barrel that’s easier to maneuver inside. You want to be able to fit the shotgun to the individual shooter with different stocks and forends. And it’s nice to have access to options like light mounts, sights, extended mag tubes, and ammo carriers.

As far as commonly available 20 gauge shotguns that fit at least most of those criteria, you’re pretty much limited to the Remington 870 and the Mossberg 500 pump actions. And at least right now, Remington isn’t actually making the 870 Tactical in 20 gauge. With either model, the variety and quality of available upgrades is nowhere close to what you would have with the 12 gauge version of those guns.

You can make it work, and you can get a pretty nice home defense 20 gauge setup if you put some effort into it, but there’s not much you can do about the lack of ammo selection. With 12 gauge, there are dozens of good options for ammo that’s specifically designed for personal protection ranging in sizes from #00 on down to #4 buckshot, and that includes plenty of low recoil loads. 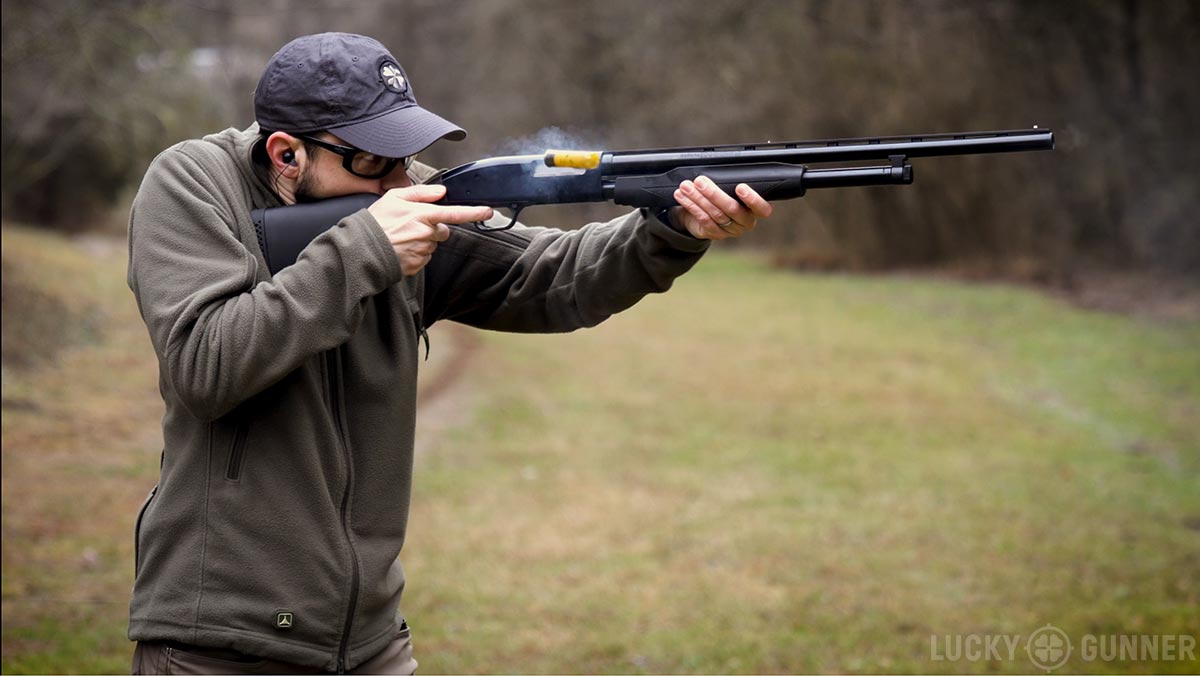 For 20 gauge, there are really just a handful of options from the major ammo companies and they are almost all loads made with the smaller buckshot sizes like #2, 3, and 4. That might not be a big problem in itself, but if the reason you’re using a 20 gauge is to take advantage of reduced recoil, these buckshot loads don’t necessarily do that. 20 gauge shotguns tend to weigh a little bit less than a similarly equipped 12 gauge by about a pound or a pound and a half. These guns handle really well, and small statured shooters will appreciate the weight reduction during a long practice session. But less weight in the gun means you’re going to get an increase in felt recoil. So depending on what loads you’re using, you might actually experience more recoil from a 20 gauge than a 12 gauge.

For example, a few days ago, I went out to the range with a 20 gauge Mossberg Maverick 88 that I borrowed, and I also brought along my registered short barrel Remington 870 12 gauge. I went through a few of boxes of buckshot running some simple drills with both guns and I didn’t notice much difference at all in recoil. If anything, the 12 gauge shot a little softer. With the Mossberg, I was shooting the Federal Personal Defense 20 gauge load with 24 pellets of #4 buckshot and in the Remington, I was using some Fiocchi Law Enforcement Low Recoil #00 buckshot. All together, the 24 pellets in the Federal load weigh 1.14 ounces, and the advertised velocity is 1100 feet per second. The nine 00 pellets in the Fiocchi load weigh 1.11 ounces traveling at 1150 feet per second. The Mossberg weighs 5.56 pounds and my 870 is 7.1 pounds. 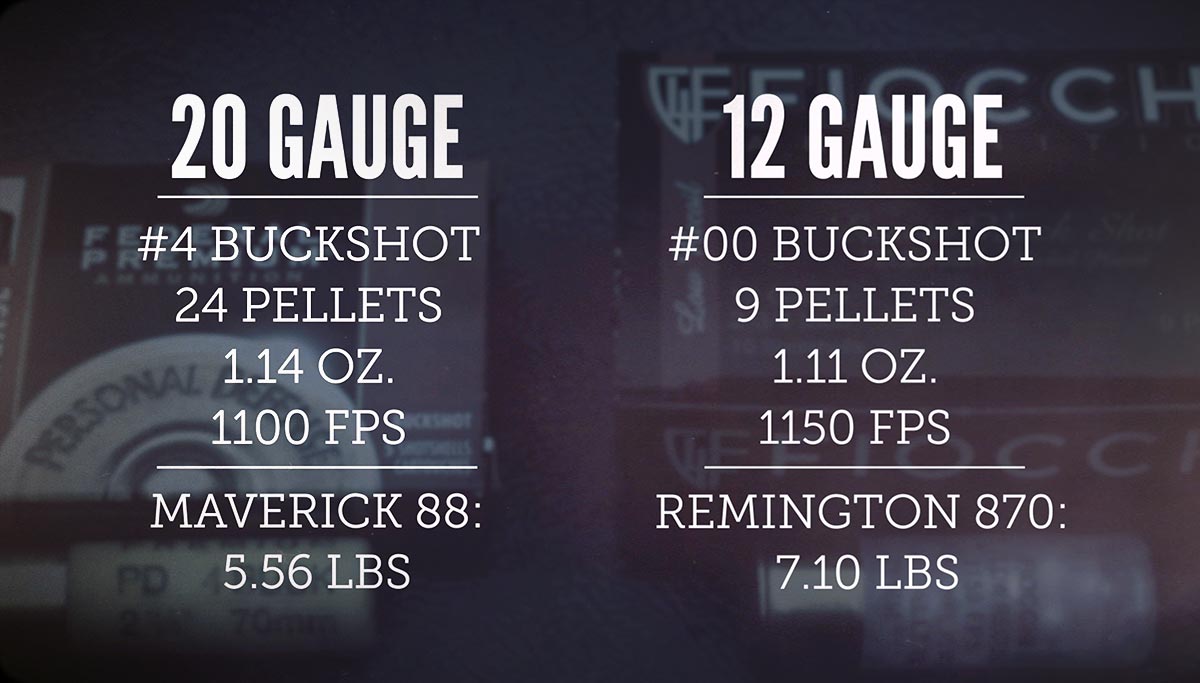 So we’ve got two loads that have very similar weight and velocity, but one is being fired from a gun that weighs about 20% less than the other. It doesn’t require any advanced math to see why I didn’t notice a reduction in recoil by shooting a 20 gauge in this particular case. And the Fiocchi buckshot is not an unusually light 00 load. You’ll find roughly the same velocity with a lot of the popular defensive buckshot like Federal Flite Control and Remington Reduced Recoil Law Enforcement. But for 20 gauge, low recoil buckshot loads are really tough to come by, if you can find them at all.

Those are some of the reasons why I typically suggest a 12 gauge with low recoil ammo rather than a 20 gauge for anyone who’s in the market for a home defense shotgun. And if you really want to cut down on recoil, take a look at a quality semi-auto 12 gauge like the Beretta 1301. If you’ve got a 20 gauge that you like and it’s working for you, I don’t think you need to change anything. 20 gauge has a lot of potential as a home defense solution, I think it’s probably just more trouble than it’s worth for most people.

If you’ve been thinking about getting a 20 gauge as a way to arm a spouse or a friend or someone you know who isn’t really a shooter, keep in mind that a pump action shotgun is not a very good novice weapon. It actually requires quite a bit of effort to be able to run one competently without having to think about it. As an alternative for a less dedicated shooter, you might want to consider something like a pistol caliber carbine, or maybe even a full size revolver — they need something with a simple manual of arms that’s easy to remember and not intimidating if they take it to the range. A pump-action shotgun, even a 20 gauge, is not any of those things. But whether you’re running a 20 or a 12, the best way to mitigate recoil is with proper shooting technique in conjunction with a very short stock. I’ve got a video about that called Taming the 12 Gauge, so check that out if you haven’t seen it. And if you would like to support our channel, the next time you need some ammo, be sure to get it from LuckyGunner.com.