It’s Part 2 of our M1 Carbine Mini-Series! Today, we’re going to take a look at some 30 carbine ammo test results – including a plywood penetration experiment and some standard ballistic gelatin testing.

Be sure to check out Part 1 if you haven’t already. This time, we’re looking at the ballistics of the .30 Carbine cartridge, including gel testing and a hard barrier penetration test.

Well, it is time once again to delve into the wonderful world of the M1 Carbine. This is the second part in a little mini-series that we’re doing all about one of my favorite rifles of all time.

Our first part was all about the history and background of the M1 Carbine and today, I’m taking a closer look at the ballistics of the .30 Carbine cartridge.

I did some “jello shots” with our trusty ballistic gelatin and we’ll take a look at those results in a few minutes. But first, something a little bit different. I decided to test the hard barrier penetration of the .30 Carbine.

A lot of the war stories that you’ll hear about the M1 Carbine from WWII on through Vietnam have to do with how well it can penetration through various barriers, whether that’s thick brush in the jungle or enemy soldiers’ helmets. Of course, there’s that crazy myth from the Korean war about .30 Carbine not being able to penetrate through the enemy’s winter coats. I think we can all agree that’s probably nonsense. But suffice it to say, there is some question as to how well the .30 Carbine can penetrate through different stuff. 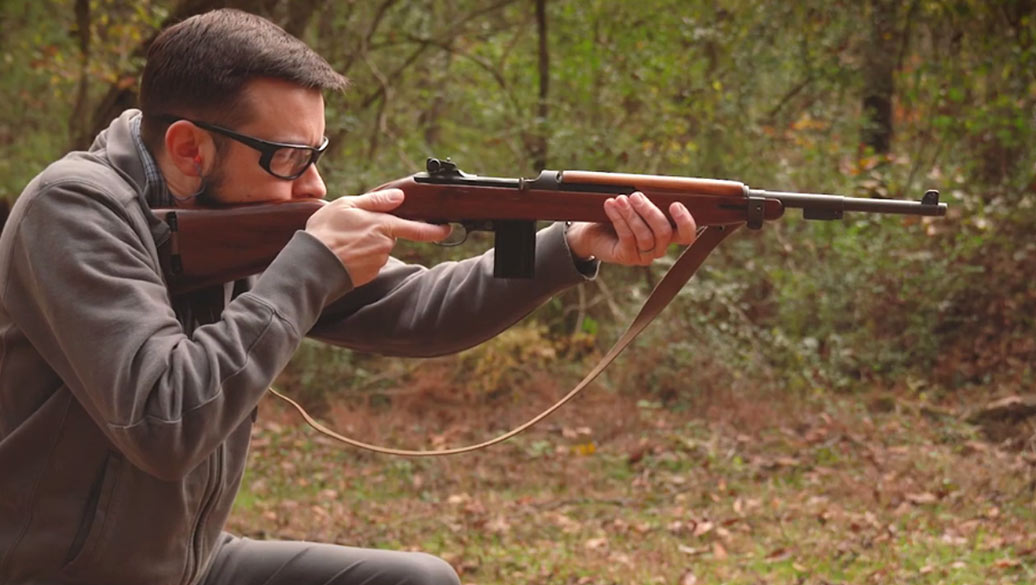 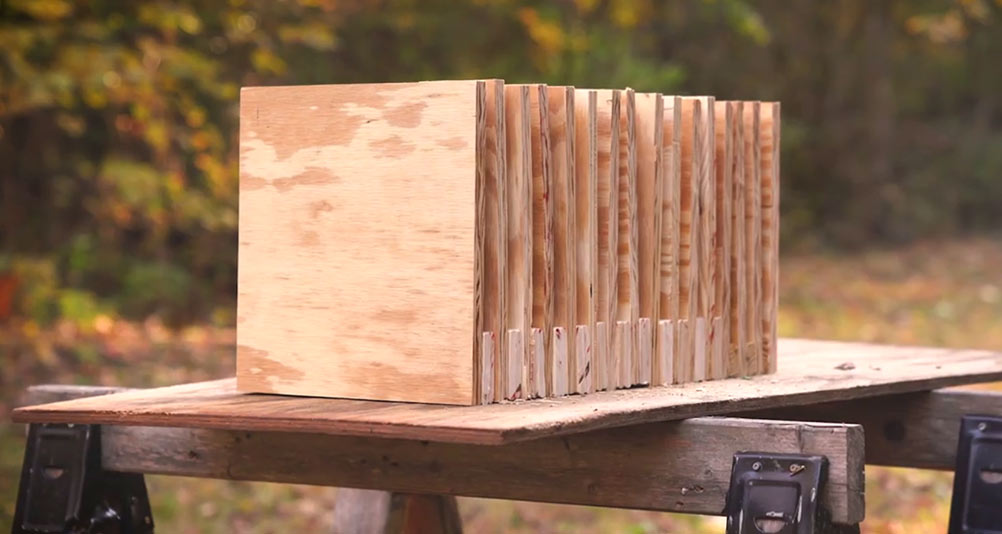 Starting with the .30-06, both rounds made it all the way through all 16 layers. No big surprise there. It’s a big cartridge with a lot of energy. One of those rounds even started tumbling — you can clearly see that it hit this piece of plywood almost completely sideways but it still had enough energy to get all the way through 16 layers. 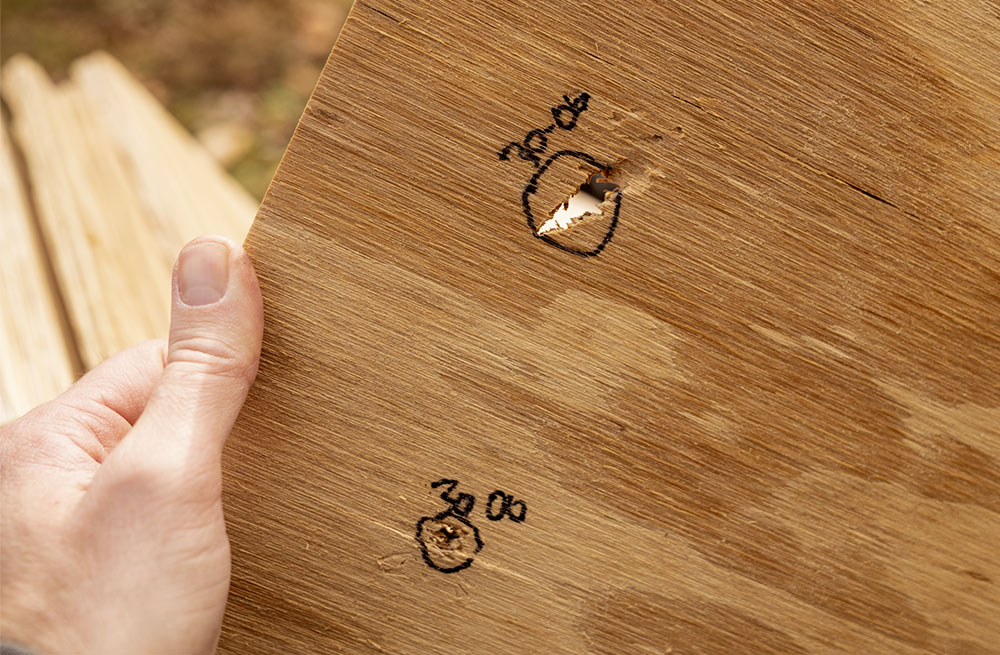 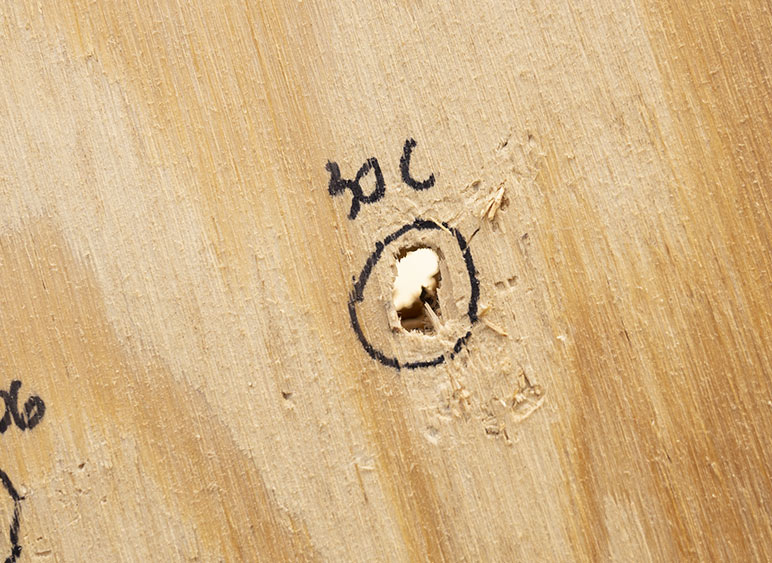 The .45 ACP (you .45 guys are going to love this), made it through five layers of the plywood. Both shots, five layers. Now, .45 is not known for being a great penetrator and clearly that’s the case. That slow heavy bullet might be fine for shooting bad guys, but not so great when you’re shooting through hard barriers. 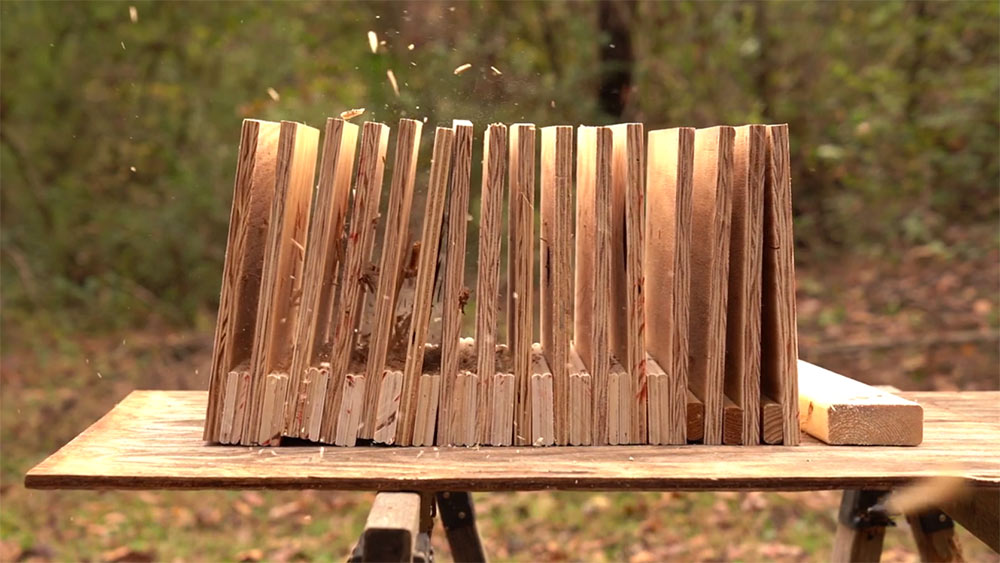 If we had shot it through a longer barrel like they would have had in the M1 Thompson or the M3 Grease Gun (the submachine guns of WWII) it might have had a little more velocity. It might have made it through one, maybe two more layers. But… probably not. I would expect the performance to be comparable to the 5-inch 1911.

Last, the 5.56: both rounds made it through eight layers. So, right between the .45 and the .30 Carbine. The 5.56 started tumbling almost immediately, just after the first couple of layers of plywood. So that’s why it was losing energy really quickly and didn’t penetrate very far. Again, the barrel I used was a little bit shorter. It was a 16-inch barrel versus the longer barrel of the M16A1. I still wouldn’t expect the performance to be a whole lot different. 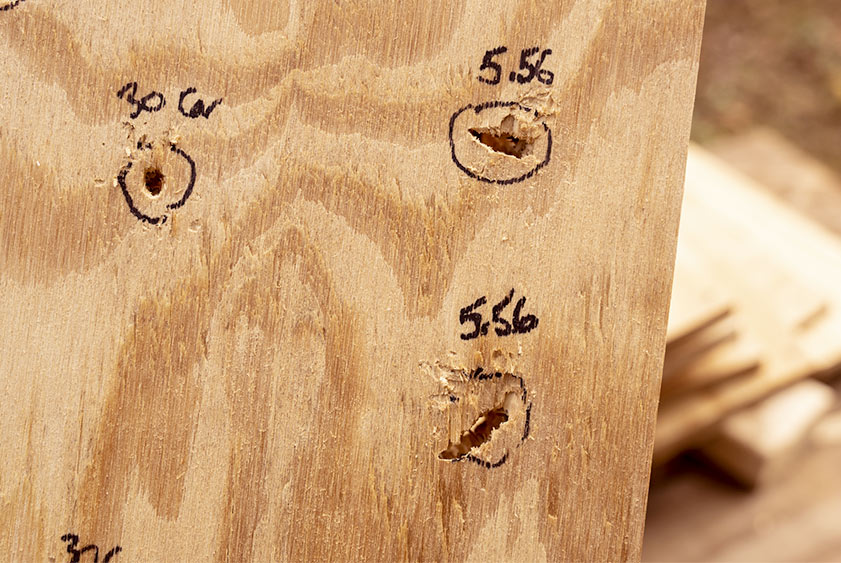 This was an interesting little exercise, but take it for what it is. It’s just a penetration test through one type of barrier with one type of ammo for each caliber. If we had used hotter ammo or hollow points or something like that, it could have looked completely different. And penetration through plywood has nothing to do with the effectiveness of a load through a flesh and blood target. So I wouldn’t say, for example, 5.56 is less effective than .30 Carbine if you actually have to shoot a mammal.

I do think it’s safe to say the .30 Carbine should not be underestimated when it comes to penetration. It is a serious cartridge, even if it doesn’t live up to the velocity and energy of a so-called full power rifle cartridge.

Alright, switching gears a little bit now, we are going to consider how well the .30 Carbine does as a self-defense cartridge. For that, we have used soft point ammo in ballistics gelatin. For comparison here, I decided to use a .357 magnum out of a rifle-length barrel (a Marlin 1894 with a custom 17-inch barrel) because that is the closest thing we can find energy-wise to the .30 Carbine.

Last week, I made a comparison to the .44 Magnum. On paper, if you run the muzzle energy calculations, .30 Carbine is pretty close to .44 Magnum out of a revolver barrel. But if you’re looking at rifle-length barrels, .30 Carbine is closer to a .357 Magnum. Pretty much all .30 Carbine loads are 110-grain bullets, so I tried to find a .357 Magnum load that was 110-grain that would have velocity similar to .30 Carbine (which is usually right around 1900-2000 fps). After some velocity testing, the load I found was a Corbon 110 gr JHP load, so I decided to test that.

I also tested a Hornady LeverEvolution 140 gr FTX .357 Magnum. This is a load specifically made for lever action rifles. And just for fun, I decided to throw in the hottest .357 Magnum load we had laying around which is a Buffalo Bore with a Barnes 125-grain XPB bullet. That’s moving at about 2100 feet per second out of the Marlin 1894, so that is a really hot load for .357 Magnum.

First, the .357 Magnum results. Both of the Hornady LeverEvolution rounds made it to about 22 inches. Expansion was right around .6 inches. Not bad. 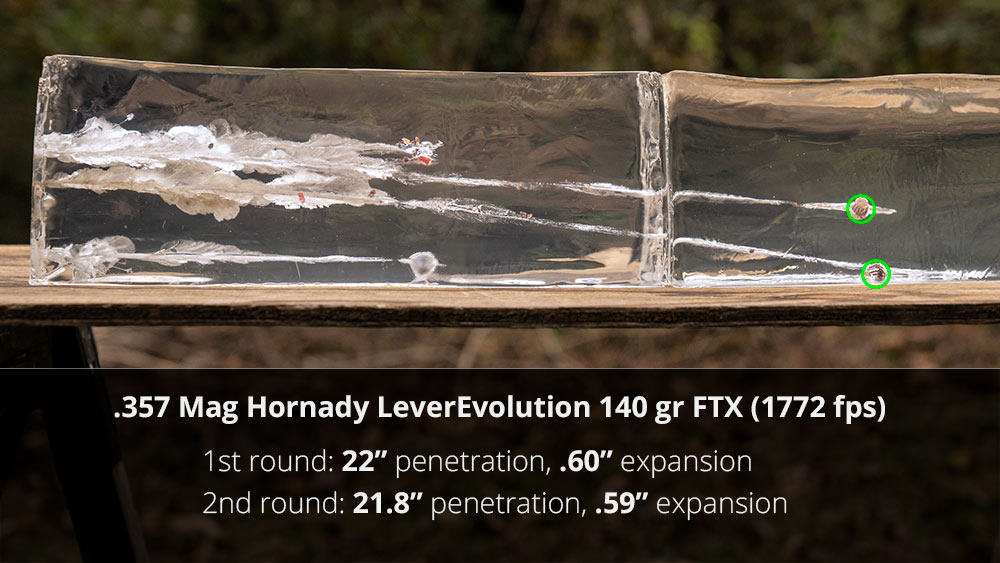 Then, the Corbon bullet. It kind of did what that 124-grain 9mm Gold Dot did a couple of weeks ago when I shot that out of a carbine. It was just too fast for what that bullet was designed for. So the Corbon load opened up too much and too quickly. It only made it to about 10 inches of penetration with .62 inches of expansion. 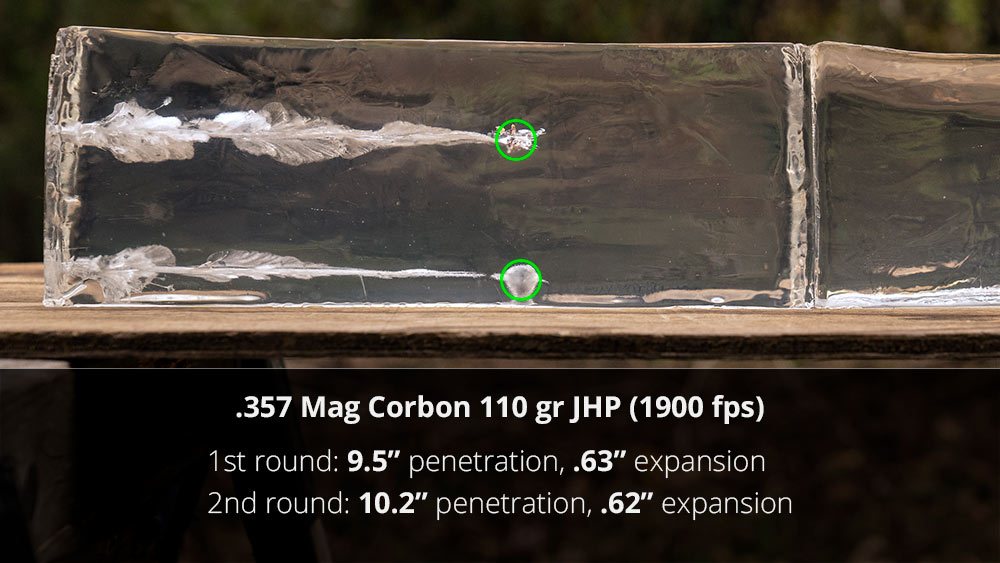 Finally, the Buffalo Bore load made it to right around 25-26 inches of penetration and .49 inches of expansion. 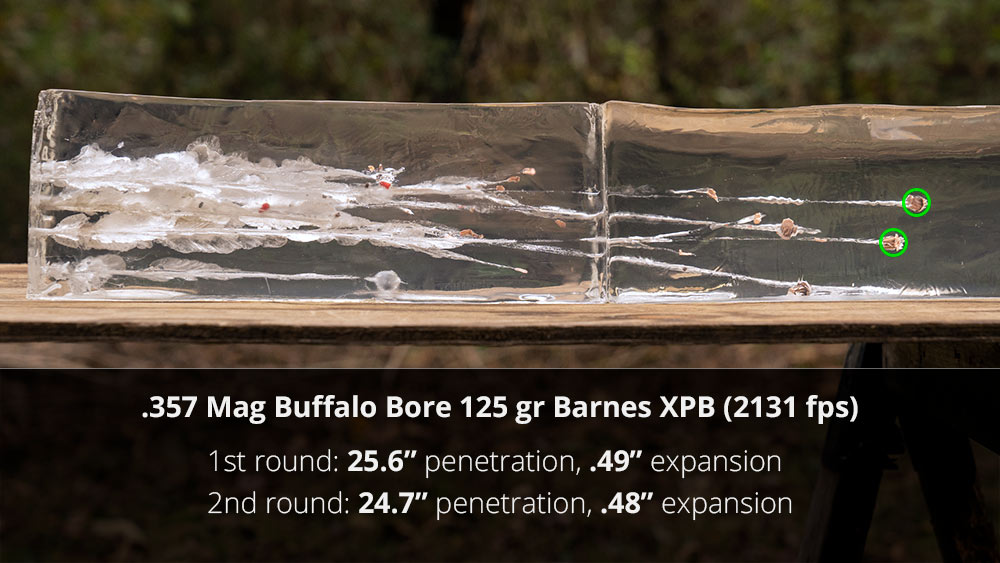 So overall, not bad if you dismiss the Corbon. Again, it just goes to show if you’re shooting pistol loads out of a rifle-length barrel, you’ve got to be careful about your ammo selection. You can’t just assume it’s going to be a little more effective because it’s got a little more velocity. If that bullet is designed for lower velocities, when you put it in a rifle, it might do something you don’t want it to do.

I like that LeverEvolution load because it’s made for a rifle barrel. It’s a little bit deeper penetration than we’d like to see for personal protection, but it’s still not too bad. It’s probably not going to go through the exterior walls of a house.

Alright, now, the .30 Carbine ammo test. Again, we’re starting with the Hornady load: the 110-grain FTX Critical Defense. Both rounds made it to right around 21 inches with .45 inches of expansion. That’s not as much expansion as the .357 Magnum Hornady load, but the bullet is also starting out smaller. So if you look at it as percentage of expansion from the original diameter rather than just the raw expansion numbers, the FTX did pretty good. 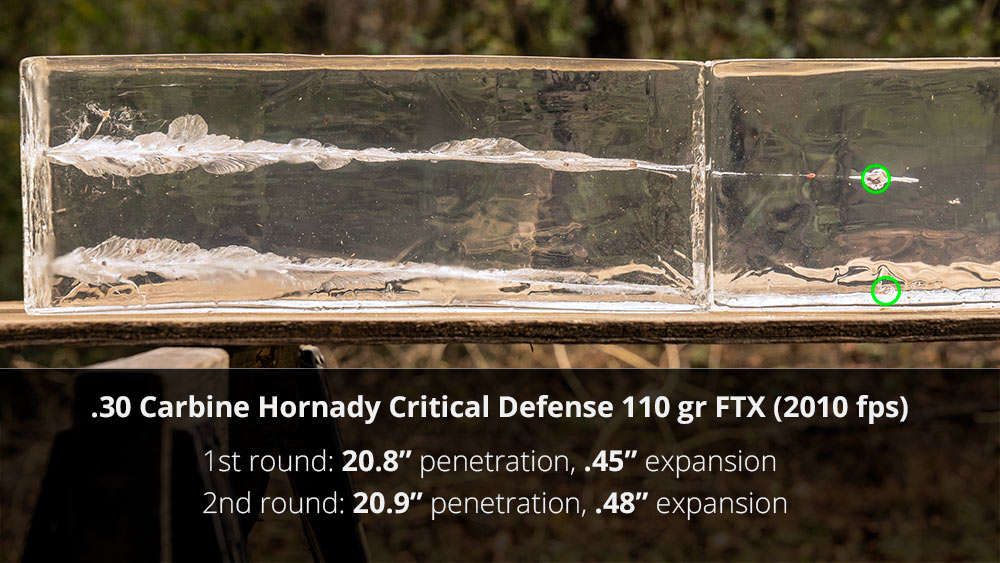 The S&B bullet, which is just a simple soft point, made it to right at 16 inches for both rounds with a .60-.65 inch expanded diameter. So, depending on how you look at it — if you’re looking for that 18-inch maximum penetration depth from the FBI standards, the S&B load is actually better than the Hornady load. 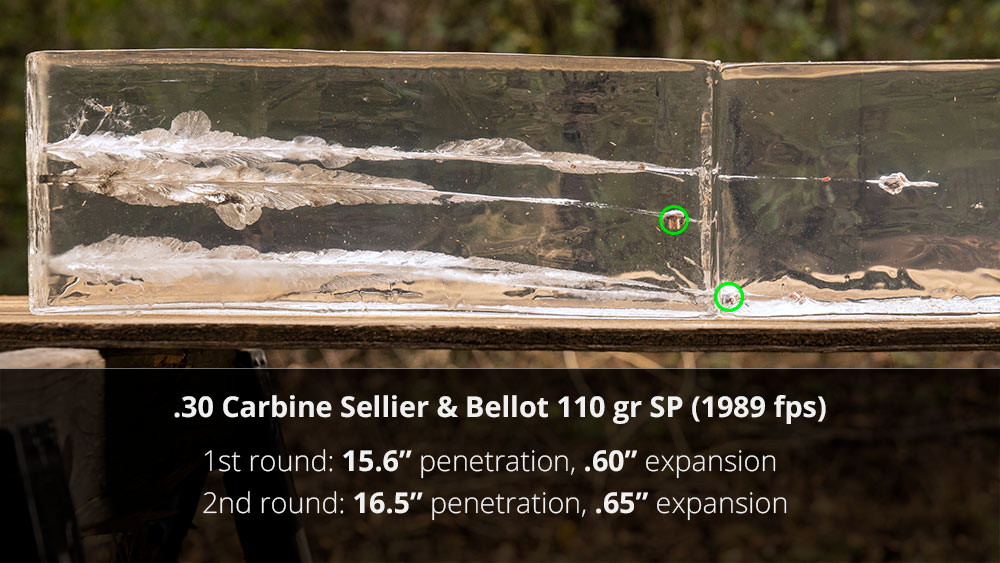 Finally, Federal Power Shok was the real penetrator: 26 inches with around .5 inches of expansion. 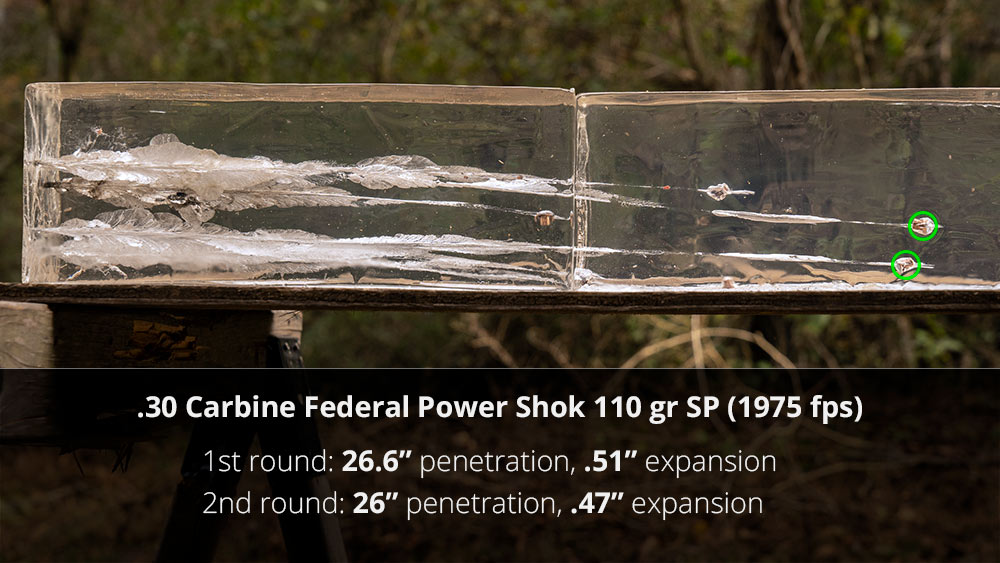 We did see some jacket-core separation with that S&B load which is not ideal, but not necessarily a deal breaker. If you’re worried about over-penetration, that S&B load is probably the way to go. Maybe for more of a hunting context, the Federal Power Shok would be better, and then the Hornady load is kind of in between the two.

Keep in mind, the ballistic gel testing doesn’t tell the whole story. .30 Carbine, even though it’s not a full power rifle cartridge, it has enough velocity and energy that it probably is causing some of that tearing in tissue that goes beyond the wound channel itself. At right around 2000 feet per second, it doesn’t quite meet that 2200 feet per second threshold that separates “real” rifle cartridges from pistol cartridges. But it’s close enough that’s probably causing some damage that we don’t really see accounted for in the ballistic gel testing.

Hopefully these 30 carbine ammo test results give you a general idea of what the cartridge is capable of. It really is right in between a rifle and a pistol round. In the next installment of our M1 Carbine series, we’re going to look at a few things we can do to help keep these old guns running and maybe bring them into the 21st century a little bit. You’re not going to want to miss it. In the meantime, be sure to buy some ammo from LuckyGunner.com.