You’ve probably put serious thought and research into what self-defense ammo to carry in your pistols. Can you count on that same ammo being the ideal choice for a pistol caliber carbine? What’s the best self defense ammo for pistol caliber carbines? To find out, we tested six popular 9mm jacketed hollow points looking at the effect a longer barrel has on their velocity as well as their performance in ballistic gelatin.

See the details in the video below, or keep scrolling to read the full transcript.

Semi-automatic pistol caliber carbines have been taking off the last few years, especially models chambered in 9mm. In addition to the Kel-Tec Sub2000 and the Beretta CX4 that have been around for several years, we now have the Sig MPX, the CZ Scorpion. There is also the Ruger PC Carbine, not to mention a host of AR-based models.

So, it’s no surprise that one of the most common questions I’ve been asked lately is what kind of self-defense ammo to use in a pistol caliber carbine.

It’s usually pretty safe to assume that a load that works well out of a short handgun barrel will also work well out of a full size handgun. But that’s not always the case when you step up to a 16-inch barrel, or even an 10 or 11-inch barrel if you’ve got an SBR-type carbine. 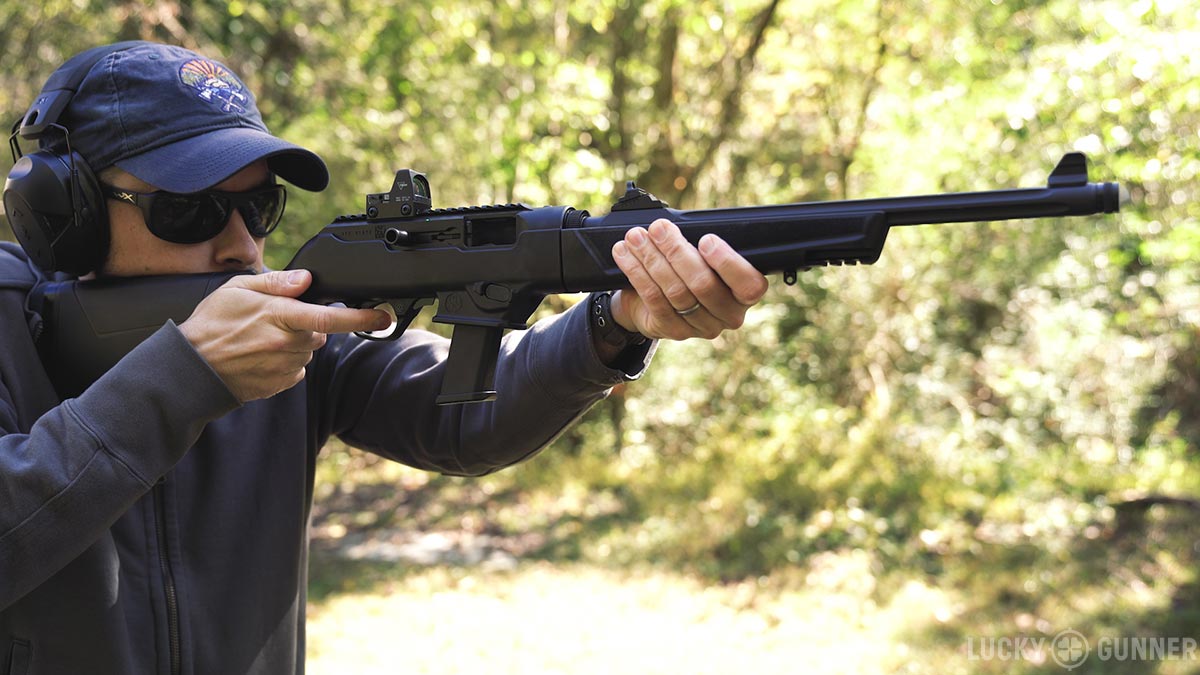 Our ballistic gel testing database contains more than 200 self-defense handgun loads that we’ve tested so far. Most of those tests were done with compact pistols with barrels around 3.5 inches. Due to the insane volume of ammo, we are not going to be repeating all of those tests with carbines any time soon. But since many of our readers seem interested in this topic, I thought I would run a few quick informal tests. We wanted to see if there were any obvious trends that might help give us some basic guidelines for carbine ammo selection.

Since the majority of pistol caliber carbines are chambered for 9mm, I decided to stick with that caliber for the tests. I started with three popular loads that all have proven reputations from both gel testing and real world use with law enforcement: 124-grain Speer Gold Dot, 124-grain Federal HST, and 147-grain Federal HST. Because this experiment is really all about velocity, I also included the +P versions of each of those loads.

I tested all six in Clear Ballistics gel with a Ruger PC Carbine with a 16.1-inch barrel. Before we get to those results, there’s a lot we can learn just from looking at velocity. Along with the Ruger carbine, I also measured the velocity of these six loads with a Beretta 92. It has a 4.7-inch barrel. We also used a customized short-barrel Beretta CX4 carbine with a 12.5-inch barrel. We also pulled the velocity data from the Smith & Wesson M&P9c test gun that we used in our original gel tests a few years back.

Here’s a chart with all the raw data for you spreadsheet enthusiasts. I took the average velocity of five rounds from each gun and ammo combo measured with a LabRadar brand chronograph. 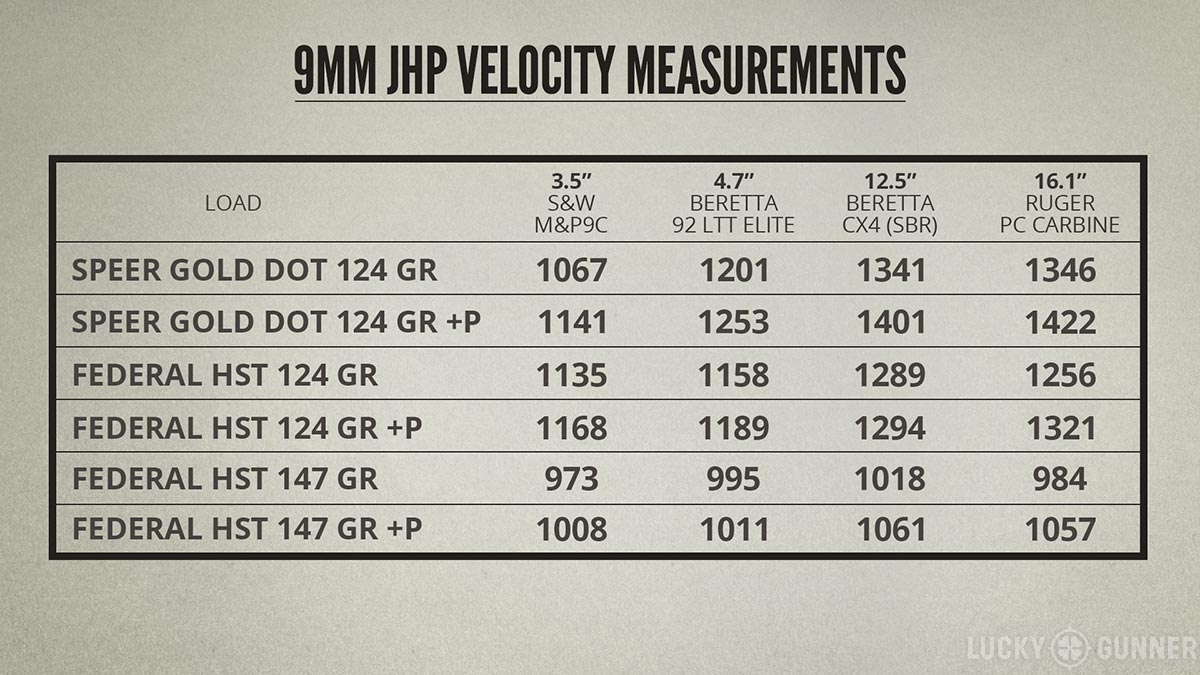 It’s a little easier to identify some trends if we look at these in a more visual format. 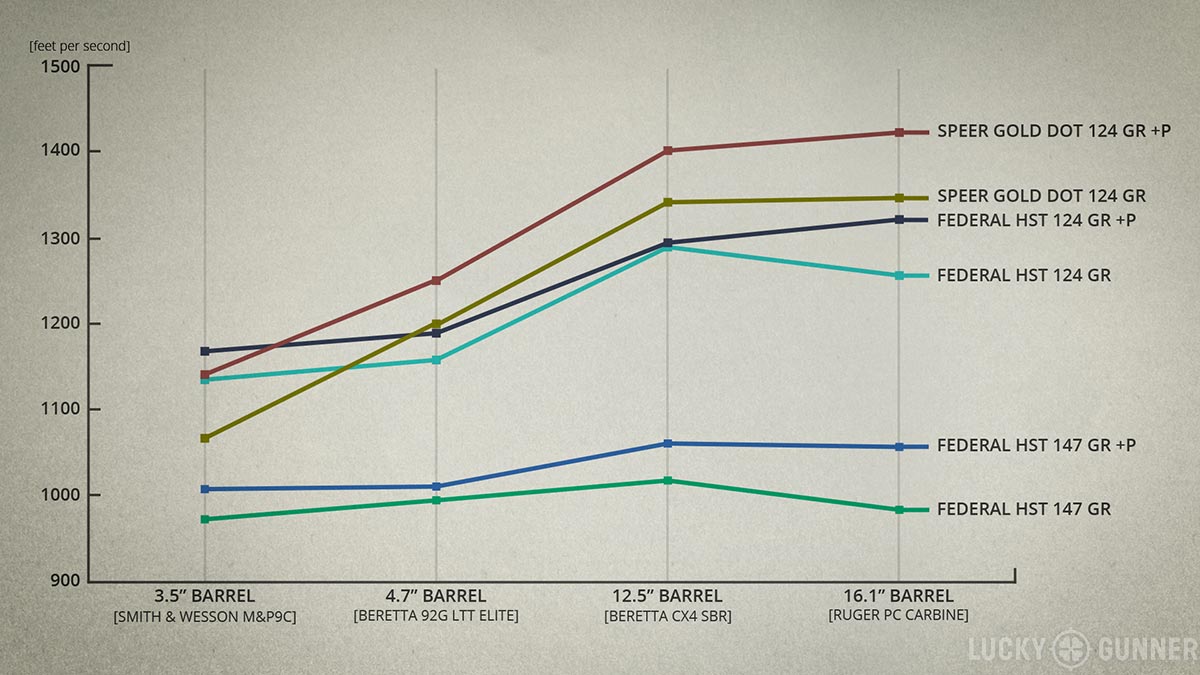 Starting with the 147 grain loads, it’s apparent that there’s very little change from one gun to the next. That’s not necessarily a bad thing. These heavier HST bullets are not as dependent on barrel length and velocity as a lot of other bullets. They tend to work just as well out of a short barrel as they do out of a long barrel.

It’s also interesting that both of these loads had a slight velocity reduction with the 16-inch barrel. This is not that unusual with 9mm ammo — a lot of loads have burned all their powder and hit max velocity well before they get to 16 inches and that last few inches of barrel ends up just slowing the bullet down a little bit.

Now let’s look at the 124 HSTs and Gold Dots. These saw a much sharper increase going from the Beretta 92 to the 12-inch carbine. The HSTs both gained over 100 feet per second. For the Gold Dots, that increase was closer to 150. Then there were only a couple of slight changes going to the 16-inch barrel.

The 124 +Ps out of the Ruger PC Carbine are super fast for 9mm. They’re on par with .357 Sig velocities we’ve measured out of a full size pistol. But those .357 Sig bullets are designed for the higher velocities. The 9mm bullets are not. If you look at the Gold Dots side by side, you can see a big difference in the shape of the opening at the top.

With the HSTs, the difference is not as noticeable but the opening on the .357 Sig bullet is definitely a little larger.

Like we’ve discussed before, modern handgun bullets are designed to operate within a specific velocity window. If it’s too slow, it might penetrate, but it won’t expand, especially with barriers. That’s why we normally use the four-layer heavy clothing barrier when we do our gel tests.

If the bullet is too fast, there are a few things that can go wrong. The issues we really want to look out for are when they expand too much and too early. This creates drag and leads to under-penetration or the bullet might just break up into pieces.

For these 9mm bullets that are at the upper end of their velocity limit, we actually decided to test them without the fabric barrier. We did this because we don’t want anything that will slow them down or clog up the hollow points. We want to find out if they can still perform when they hit the target at their maximum velocity.

So let’s look at the gel tests, starting again with the 147-grain HSTs.

I fired two rounds of each load into the gel. Remember, we’re looking for something like 12 to 18 inches of penetration along with 150% expansion. The 147-grain loads did pretty much the same thing with the carbine that we saw in our original short barrel pistol tests. This is not surprising because there was very little change in velocity. Expansion and penetration were both excellent. 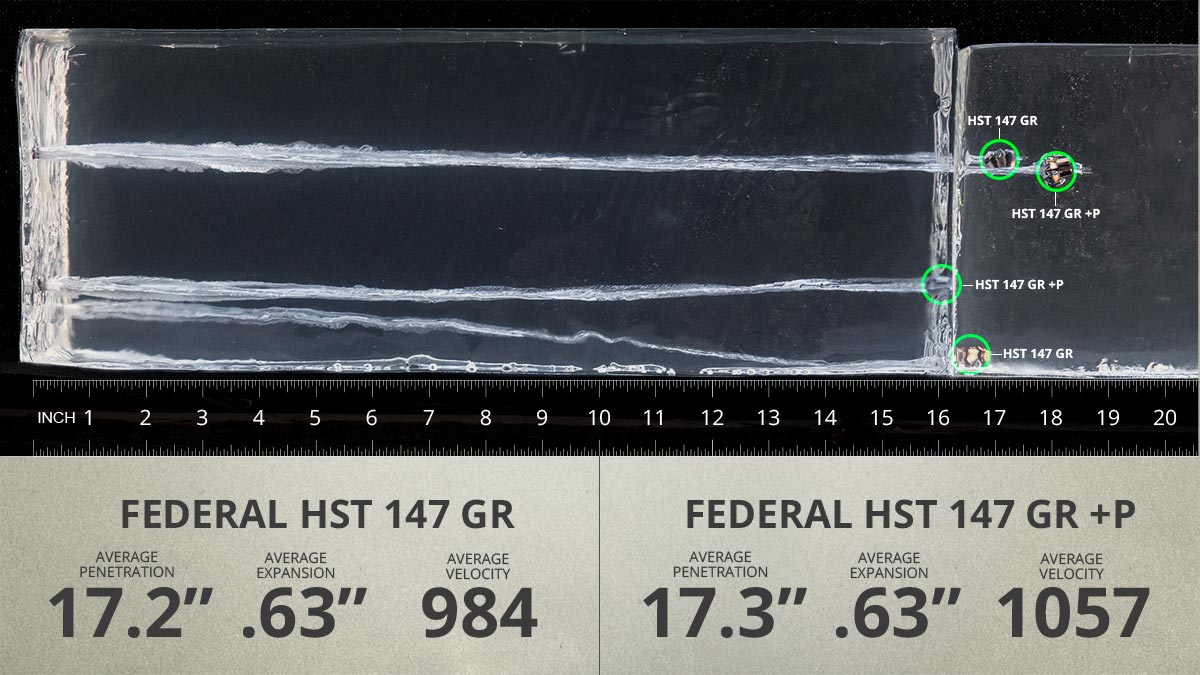 The 124 HSTs also looked really good. Even the +P, which was moving 153 feet per second faster out of the carbine, still managed to have good performance. There was a little more expansion here than when either of these were fired out of the M&P Compact in our original tests and there was around 4 to 5 inches less penetration, but it was still within the ideal range. [M&P9c 124gr HST results. 124gr +P results] 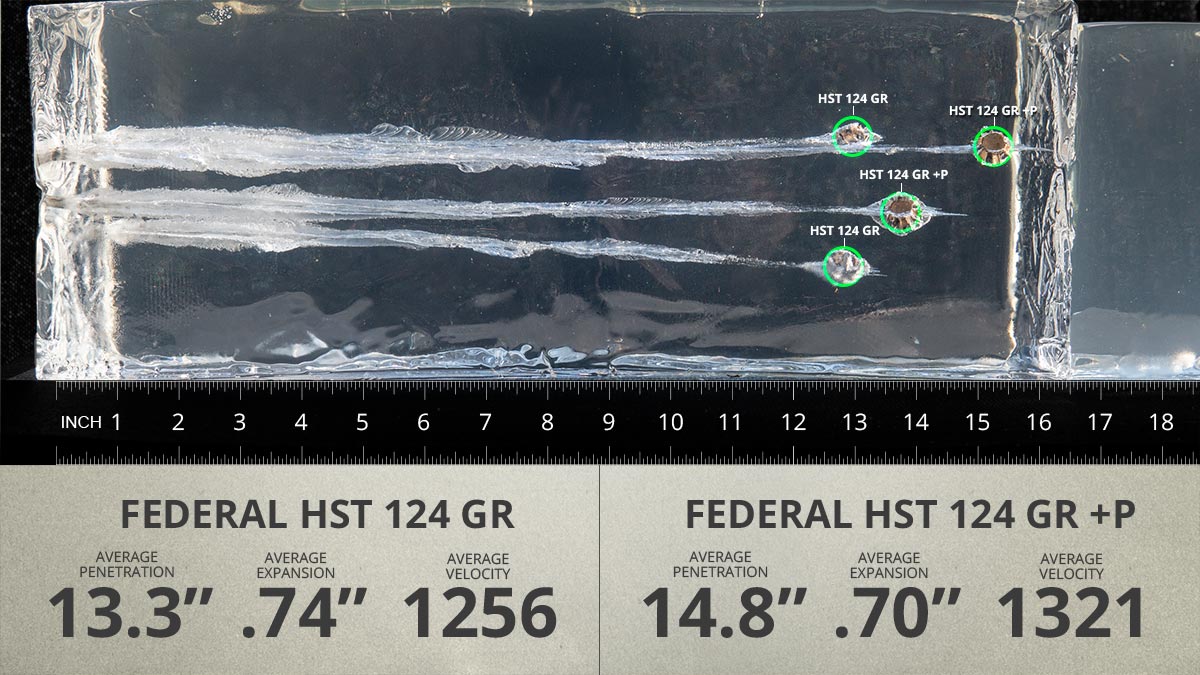 Okay, now the Gold Dots, and here’s where things really get interesting. 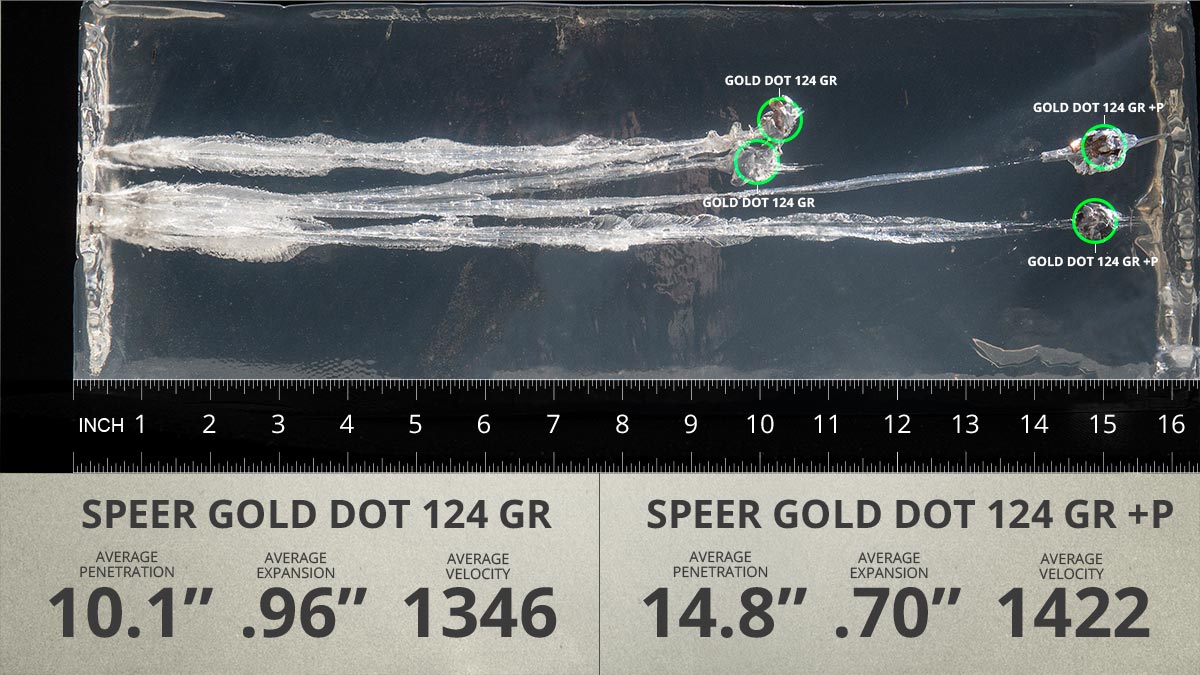 The standard pressure 124-grain Gold Dots only penetrated 10 inches. The +Ps made it to 15 inches, but take a look at these bullets. This is beyond controlled expansion. This is uncontrolled deformation.

For comparison, this is what Gold Dots normally look like when they expand like they’re supposed to.

So on one hand, yes, this is impressive expansion and I’m sure it would really hurt and the +Ps did have sufficient penetration. But it’s also obvious these bullets were not designed to be pushed to 1400 feet per second. Just by changing something small like shooting them out of your carbine instead of mine, they could easily under penetrate. They might also have poor accuracy, or otherwise behave unpredictably.

So what can we learn from all of this? Well, if I was choosing from among these six loads, I would pick one of the two 147-grain HSTs for a home defense 9mm carbine. I’d probably go with the standard pressure version. It tends to have better availability and it seems to have a better reputation from use in law enforcement. The velocity numbers are nothing special but that load does so well even at lower velocities that it doesn’t really matter.

Also, as we saw in the 100-yard ballistic gel test I did with John Johnston a few months back, heavier for caliber bullets appear to do better at long distance than the faster, lighter bullets. If you’re using a 9mm carbine because you think you might have to take a longer shot for some reason, now you’ve got two very good reasons to consider using a heavier bullet.

If you’re wondering about a load that’s not one of the six I just tested, you can probably make some educated decisions if you have access to a chronograph and you can measure the velocity out of your gun. Most ammo manufacturers publish the velocity of their jacketed hollow point loads either on their website or on the ammo box itself. Sometimes they tell you the length of their test barrel, sometimes they don’t. In this case, you don’t really need to know that. You can probably assume that the published velocity is somewhere within the intended operating window for that bullet. If you measure the velocity out of your carbine and it’s 150 or 200 feet per second faster than that, you might want to consider a different load.

Pushing a pistol bullet faster doesn’t make it perform like a rifle bullet. Sometimes it actually hurts its performance.

I think what we really learned here is that I probably need to do some more gel testing with carbines. Based on these results, I would be very reluctant to make any assumptions about how a given hollow point is going to perform out of a carbine without at least seeing some velocity data. Even then, it would just be a rough guess. If that’s something you guys would like to see more of in the future, be sure to let me know in the comments. In the meantime, you can support us by getting all your favorite ammo with lightning fast shipping at Lucky Gunner.

There's a ton of talk out there about an accessory for Glock pistols called the Striker Control Device. It seems...