What do you actually need to set up a dependable, moderately-priced AR-15 for defensive use? It’s probably somewhere between the bargain basement garbage guns and the tricked-out Gucci rifles for military cosplayers. Today, we’re offering a few recommendations to help you pick out a reliable carbine and get it set up with a few essential accessories — everything you need and nothing you don’t.

You can set up an AR-15 to do just about anything you could ever want a rifle to do. But if you’re looking to buy your first AR or upgrade the one you have, the number of options can be overwhelming. There’s really no easy way to figure out which of the dozens of brands and hundreds of models to choose, let alone which parts and accessories you need.

Hey everybody, I am Chris Baker from LuckyGunner.com. Sometimes, you’re not looking for the absolute best or the cheapest. You just want to start with something that’s dependable and reasonably priced. Today, I’m going to give you some suggestions for a basic, no-frills defensive AR-15.

If you want a carbine for something other than personal protection, a lot of this will not apply to you. Hunters and competitors have their own needs that I’m not going to address. And for some people, playing around with the hardware is, itself, a hobby and they don’t really care whether or not the gun is practical. There’s nothing wrong with that – you guys go knock yourselves out.

For defense in your home, your carbine doesn’t need much. There are plenty of changes you can make to squeeze a little more performance out of the gun at the range. The real world benefits of those improvements are debatable. And some of those upgrades might actually make the gun less suitable for that home defense role.

All you really need is a decent carbine, an optic, a light, and a sling. Right now, you set up a very respectable carbine with all of that stuff for under $1500. Sometimes a lot less if you get lucky and find stuff on sale. So let’s start with the carbine itself.

I’d suggest a basic 16-inch AR-15 chambered for 5.56. There are some other good calibers out there for ARs, but you can’t beat the availability, cost, and low recoil of 5.56.

Sometimes, a cheap budget-tier AR works fine… a lot of them don’t. They often have poor quality internal parts. Or sometimes they’re just not assembled correctly and parts start coming loose. I’m going to recommend a couple of brands in the middle price range. This is by no means an exhaustive list. There are a ton of other good options out there.

My default recommendation is usually Bravo Company or BCM, like our demo gun here. They’re widely respected for making reliable guns without a lot of unnecessary bells and whistles. My first AR was a BCM and I’ve been very happy with it as well as all of their stuff I’ve tried since. BCM is at the upper-end of the mid-price range these days at around $1200-1500 for a basic carbine.

For a couple hundred less, you could pick up a Colt. They don’t quite have the same reputation they used to as the gold standard for ARs. They still generally make quality rifles in the $1000 range.

The most affordable AR that I would consider is the Smith & Wesson M&P 15 Sport II. Right now, I think they’re going for around $700-800. They’re about as basic as you can get, but they tend to be pretty well made for the price.

A lot of people try to save money by assembling their own AR with a parts kit. It’s not difficult to do, but it’s also easy to mess up and not know you’ve messed up. Buying the special tools you need will negate any potential cost savings for just a single rifle anyway. So for your first AR, just stick to factory-made guns.

Even if you narrow down your search to the brands I mentioned, you’re still going to end up with a ridiculous number of models to choose from. The features that often distinguish these rifles from each other are the furniture, the sights, and the muzzle devices.

By furniture, I mean the stock, the grip, and the handguard. The stock and the grip really don’t matter that much. When in doubt, just get a carbine that comes with Magpul furniture. A lot of gun companies use Magpul’s entry-level stock and grip for their carbines. It’s very well-designed stuff and most people will never need to upgrade from that. 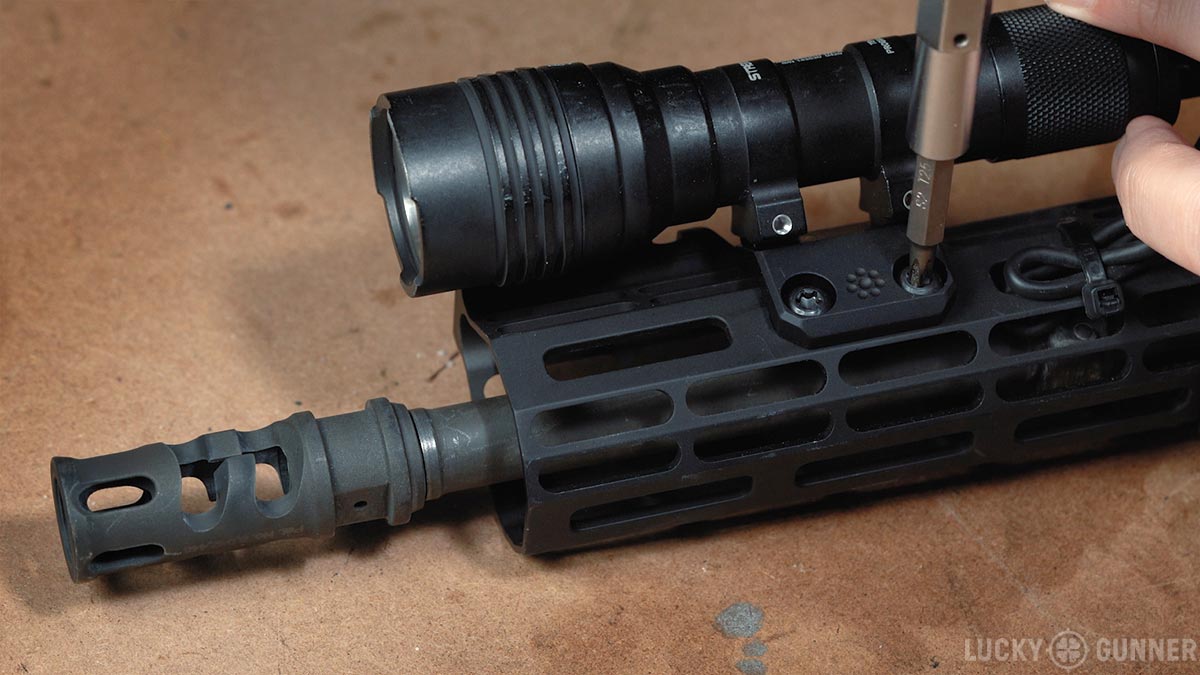 Most modern ARs have what’s known as a flat top upper. That means they’ve got a picatinny rail that runs all the way down the top of the rifle. They often don’t come with sights, so you can add whatever optics or sights you want. Older-style ARs have this big triangular front sight built into the rifle. They may or may not come with a rear sight to go with it. This is known as a front sight gas block.

Nearly all ARs come with a threaded muzzle with either a flash hider, a muzzle brake, or a compensator attached. Flash hiders reduce muzzle flash. Brakes and comps reduce recoil and the movement of the barrel. The most common muzzle device by far is the classic birdcage-style A2 flash hider. That’s really all you need for a home defense gun. ARs already have very little recoil. The compensators are nice to have for competition, or if you otherwise just like to shoot fast. 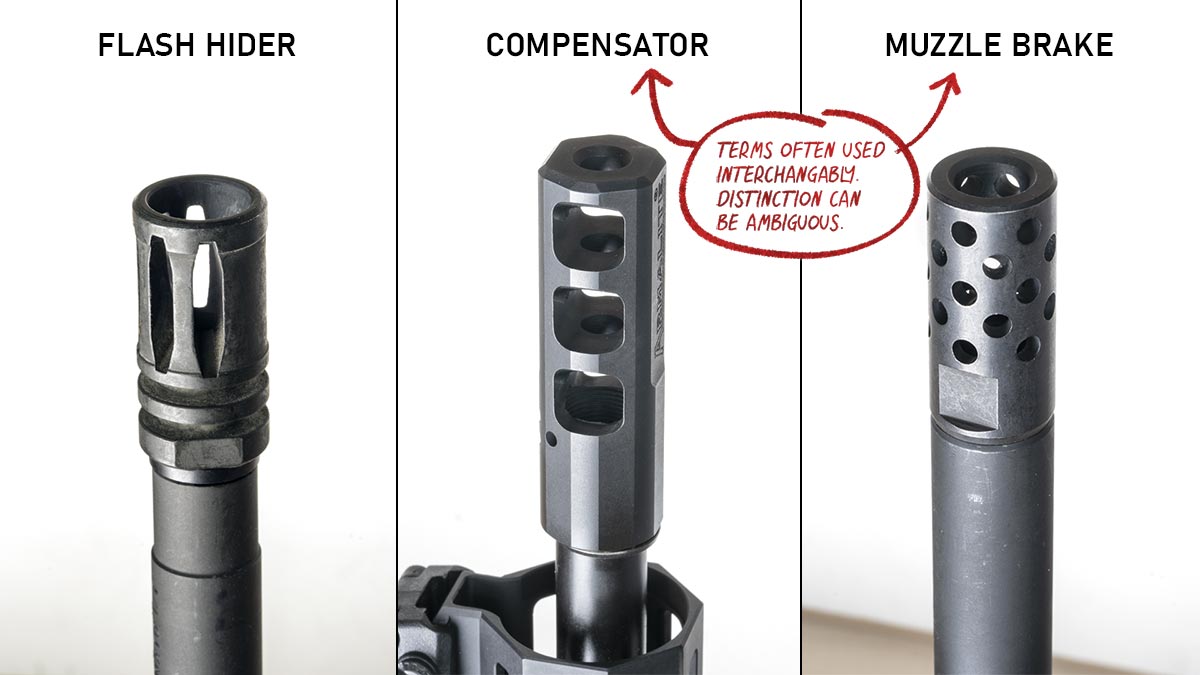 The downside is that they make the gun much louder. If you have to discharge an AR indoors with no hearing protection, you’re already going to end up with permanent hearing damage. A compensator or muzzle brake will just make it worse. Most of them are also super obnoxious to anyone around you at a public range.

Some ARs, like this one, come with a muzzle device that is permanently welded to the barrel to give you the shortest possible legal barrel length. That’s the one thing on this gun that’s probably not ideal. I don’t recommend a welded muzzle device for your first AR, simply because you can’t change it later if you want to try a different muzzle device or a silencer.

For optics, most of your options fall into one of three categories: iron sights, magnified optics, and electronic non-magnified optics. I would suggest a non-magnified dot sight. Everyone should at least know how to use iron sights, but practically, a dot sight is much quicker and easier to use and about a thousand times better in any kind of dim lighting. The battery life in these things is measured in years, even when you leave them on all the time. It still wouldn’t be a bad idea to have backup iron sights on the gun just in case. Here, I’ve got a set of the Magpul MBUS Pro flip-up sights. The non-Pro set is also good and a bit more affordable. 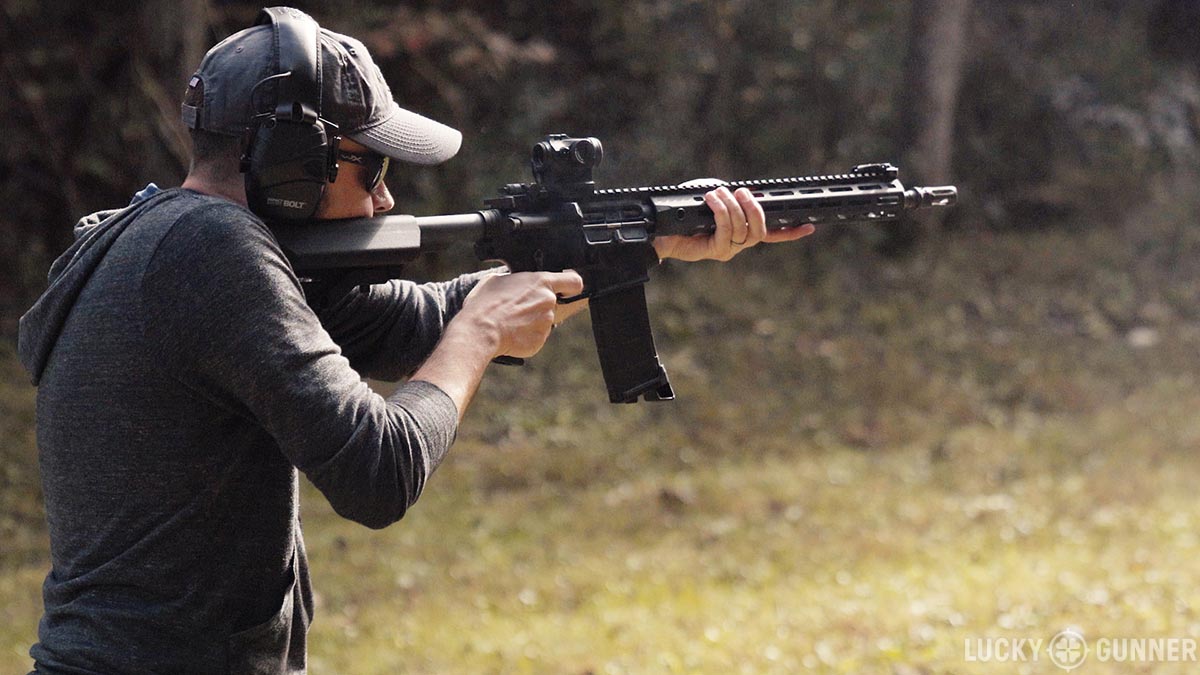 Right now, everybody wants Low Power Variable Optics. These scopes can be adjusted down to zero magnification, so they’re basically the same as a dot optic. But then you can crank them up to anywhere from four times to ten times what the naked eye can see. I love LPVOs. They give you the most versatility. But they’re also several times heavier than a simple dot optic. They’re more expensive, more fragile, and more susceptible to losing zero if they get bumped or dropped.

You don’t need magnification in a home defense carbine, so I’d stick with the dot optics. The cost of reliable dot optics has dropped significantly over the last few years. Today, there are at least a handful of decent options in the $150-200 range. My go-to budget suggestions are the Swamp Fox Liberator II or any of the Holosun red dots. Their HS403B is the most affordable and it’s a pretty solid optic.

We never want to shoot at something we cannot identify, and a weapon mounted light can help us out with that. You don’t need different brightness modes or a strobe function. And you definitely do not need a laser on your rifle. You do need a light that’s bright enough so you don’t have to point it directly at something to identify it. You want to keep your muzzle pointed in a safe direction until you know there’s a threat.

Don’t let somebody convince you that your only viable options start with a $300 Surefire Scout light. I’d also be wary of anyone who says their budget light “just as good” as a Surefire. There are a lot of really, really bad weapon mounted lights out there. They melt batteries. Their bodies crack. Their electronics fail when they’re exposed to recoil. That stuff even happens to the good lights on occasion, but the cheap ones fare a lot worse.

Almost all of my weapon mounted lights have been from Streamlight. They offer the best balance of price and quality. For a carbine, the best value out there is the Streamlight ProTac Rail Mount at around $120. It comes with the option to attach a traditional tailcap button or a remote pressure switch. It’s all compatible with a picatinny rail, or you can get an M-LOK adapter like this one. 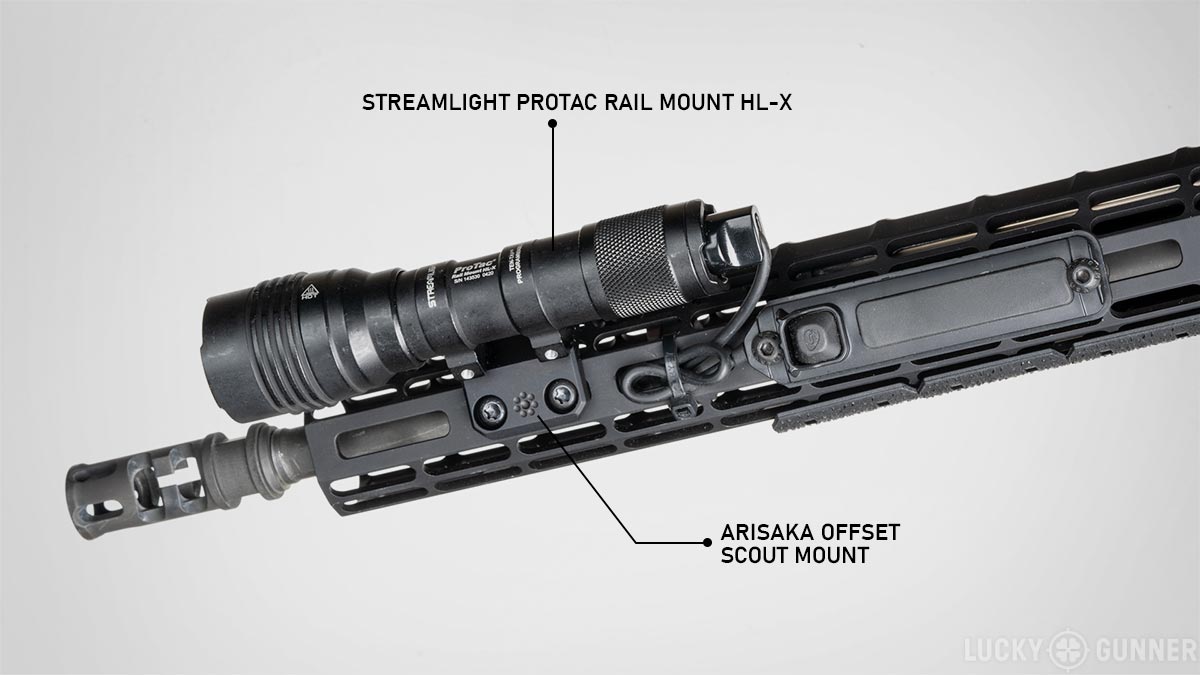 If you don’t want to spend quite that much, your next best option might be to get a mount for a simple handheld flashlight. Here, I’ve got a Magpul light with a Surefire G2X. This is Surefire’s most affordable light at around $70, but they’re about as bomb proof as it gets. Or for around $45, Streamlight has a similar model called the Polytac.

Finally, let’s take a look at slings. A sling gives you the ability to use both your hands without putting the rifle down. There’s some debate as to whether they’re really necessary on a home defense carbine. I think they can be really useful. They can also cause problems if they get hung up on doorknobs or make the gun harder to retrieve from inside a gun safe. So it’s really important to set the sling up correctly and have some method to stow it so it stays out of the way until you need it. On this gun, I’ve just got a hairband holding the sling in place.

There are several quality rifle slings out there. I have been using the Viking Tactics VTAC slings for years and haven’t found a reason to switch to anything else. You can pull this tab to bring the rifle in close and keep it from swinging around. If you need to shoot, you just pull the tab back out to lengthen the strap again. Blue Force Gear and Magpul both offer very similar slings. They’re all available with padded or unpadded straps. I prefer the padded slings if I’m going to be wearing the gun for more than about 10 minutes.

Once you get the rifle setup, leave it that way for a while, buy a bunch of magazines and ammo, and just go shoot it. Shoot some drills, run it through a training class, or get at least 500 rounds down range before you change anything. Unless you’ve got something on the gun that’s obviously broken or causing malfunctions, try to resist the temptation to play around with the hardware. The more you actually shoot it, the better idea you’ll have of whether those changes and additions are really necessary. Guys, I hope you found that helpful. If so, the next time you need some ammo, be sure to get it from us with lighting fast shipping at LuckyGunner.com.