The cheek pistol is a concept devised by our friend Rhett Neumayer, (a name that should be familiar by now if you’re a regular here). It’s a shooting technique that only works with very a specific type of large-format pistol like the KelTec CP33. The results are nothing short of impressive: rifle-like shooting performance in a package that weighs less than a 1911.

This is a KelTec CP33. It’s a semi-automatic pistol chambered for .22 LR with 33-round quad-stack magazines. With these accessories, it weighs about 40 ounces fully loaded. It’s fun. It’s flimsy. It’s exactly the kind of oddity we’ve come to expect from the twisted minds at KelTec.

Hey everybody, I’m Chris Baker from LuckyGunner.com and today I am not actually reviewing the KelTec CP33. Instead, I’m going to use this gun to tell you about the concept of the cheek pistol. 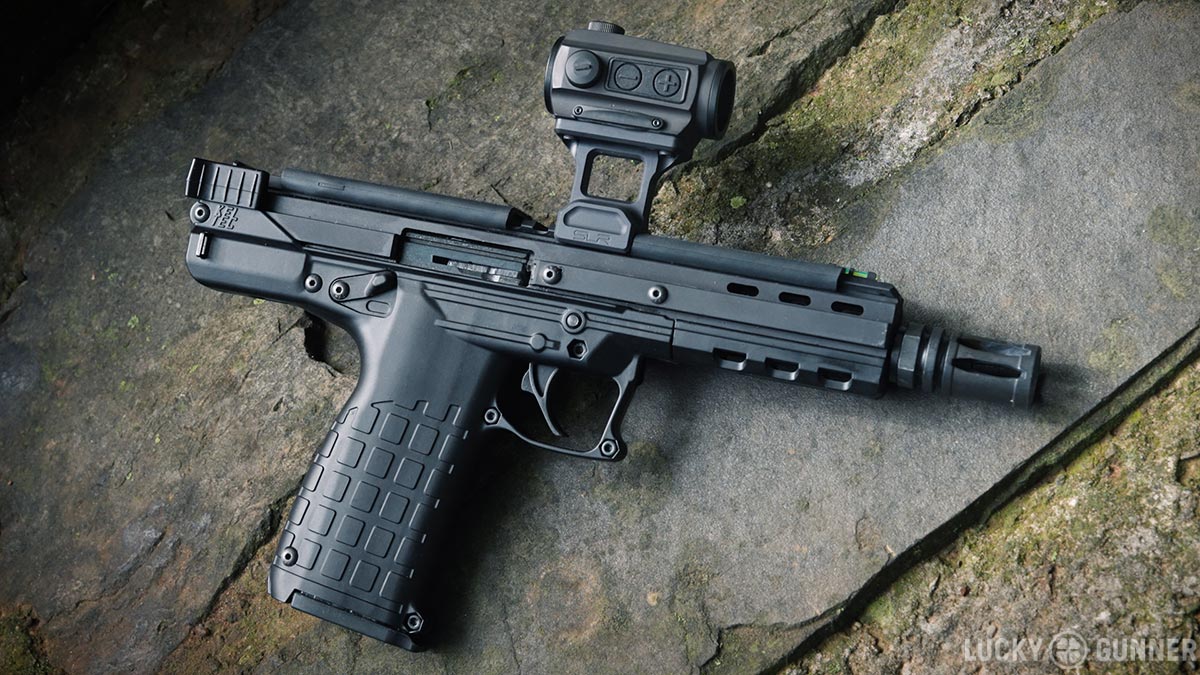 Most people would try to shoot a gun like the CP33 as if it was a conventional pistol, or add a brace or a stock to it and shoot it like a rifle. But those are not our only options.

The action extends way past the grip and it gives us enough of a shelf to get a cheek weld like we would on a rifle stock. There’s enough room on the front of the gun to get an overhand grip with the support hand. That leaves just enough space in the middle for a non-magnified optic. The shooting arm elbow ends up being tucked very close to the body. You push into the cheek a little with the strong hand, and pull back with the support hand. And now you have a cheek pistol. 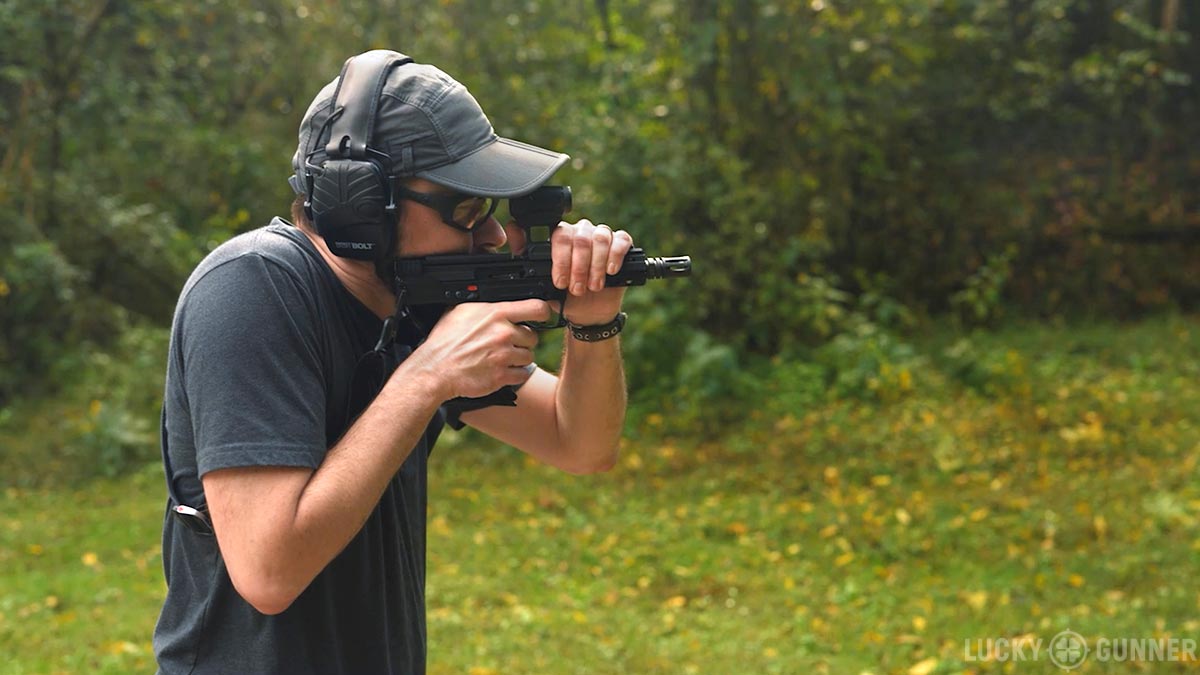 It feels a little awkward at first. It kind of looks ridiculous. You really have to try it before it clicks. This technique provides an extremely stable shooting platform.

I don’t miss having a shoulder stock at all. I think it actually feels more stable than shooting a rifle from a standing unsupported position, simply because it’s so lightweight and none of that weight is out in front of you. The technique even works one-handed because you still get two points of contact.

Some of you might have seen the Forgotten Weapons video about this technique. I got the idea from the same guy that Matt and Ian talk about in that episode. Rhett Neumayer from Demonstrated Concepts is the tactical mad scientist behind the cheek pistol concept. I’ve mentioned Rhett’s techniques a couple of times before, like using a cheek weld to stabilize stockless shotguns and AR-style firearms that have just a buffer tube. You can see more of his stuff on the Demonstrated Concepts YouTube channel.

To say Rhett is an outside-the-box thinker would be a gross understatement. I don’t always agree with his conclusions, but I think our industry needs more people like Rhett. By any standard, he’s an excellent shooter with conventional guns and techniques, and he’s great at experimenting with new stuff that most of us would never think of trying.

Benefits of a Cheek Pistol

Let’s take a closer look at the benefits of the cheek pistol concept. And for a minute, try to forget about this particular gun. If you don’t like Kel-Tec, imagine that it’s made by some other company, and if you don’t like .22 LR, let’s pretend it’s a 9mm or some other cartridge. 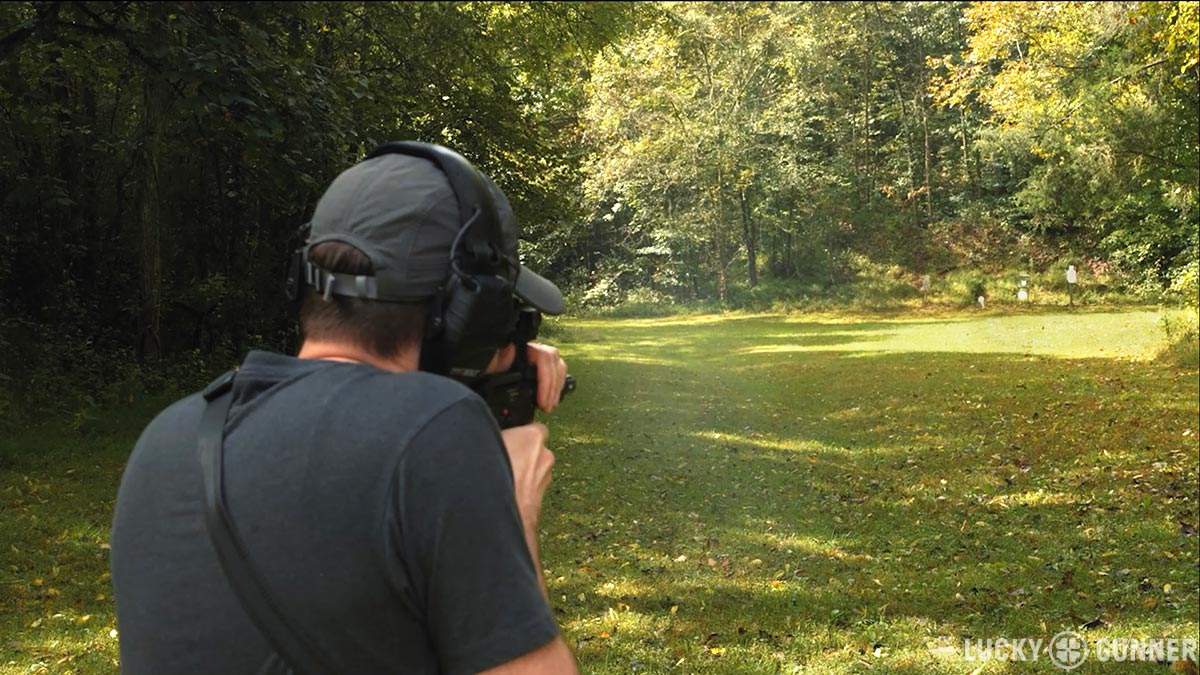 I can fit this whole gun with the optic and a sling and a handful of mags in this little Maxpedition pistol case. Or I can sling it and it hangs under my arm and out of the way or behind my back. It’s a lot less obtrusive than a carbine or even an SBR.

With the right cartridge, there’s the obvious use case as a PDW for law enforcement and military. For things like clearing structures, mounting a cheek pistol gives you a more compact profile than you’d have with any other type of firearm.

For home defense, it’s usually better to stay in place rather than try to clear your house alone. But if you have to move for whatever reason, there are a lot of advantages to what amounts to a handgun with the shot-placement of a shoulder-fired weapon.

It also could serve as a very low profile bag gun for traveling or emergencies. A cheek pistol could probably handle a lot of pests on a farm or a ranch that you might otherwise carry around a long gun for. And If you just want to have some fun with it, a cheek pistol is an alternative to other large format pistols that really need a pistol brace or a stock to be useful. 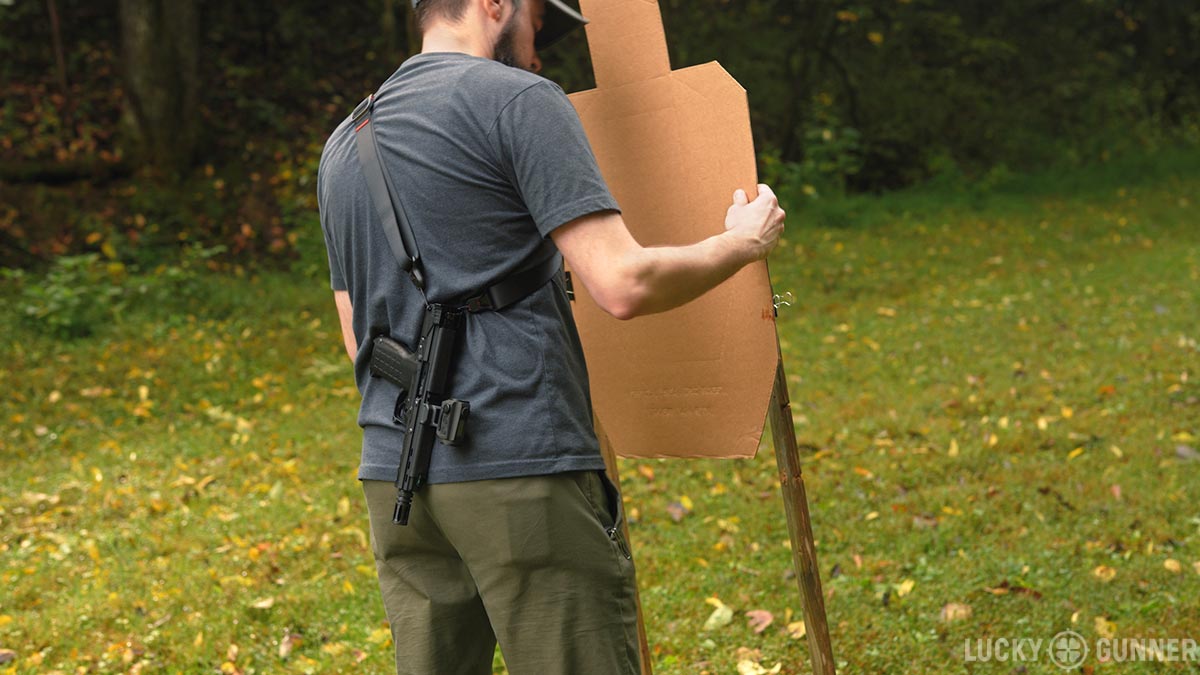 If you’re interested in trying out the cheek pistol concept yourself, very few guns have the kind of odd shape required to make it work, so your options are limited. In addition to the KelTec CP33, Rhett has also experimented with the 9mm TP9 pistol from B&T. That’s a semi-auto variant of the old Steyr TMP submachine gun. Unfortunately, the base gun costs about two grand and, according to Rhett, the trigger is just horrendous.

There are some other platforms that might work for a cheek pistol. Rhett is still experimenting. I might experiment with some options myself. Personally, I have not been that impressed with the CP33.

This particular CP33 has not been very reliable, even by .22 standards. It’s very ammo sensitive. It won’t even chamber the first round in the mag most of the time. Matt Haught, in the Forgotten Weapons cheek pistol video, mentions some similar issues with his. That said, if you want to roll the dice and hope you get a reliable sample like Rhett has, I can give you a couple of tips for setting it up as a cheek pistol.

Setting Up A Cheek Pistol

First, you’ll need a non-magnified dot optic and a mount. I recommend an extra tall mount like this 1.93-inch mount from SLR Rifleworks. This will allow for a more natural upright head position with your cheek weld. I tried it first with a shorter mount and it works, but it’s much easier to use with the tall one.

You will probably also want some kind of rail covers so you’re not mashing the bare picatinny rail into your face. I got these soft rubber rail covers from Ergo Grips and cut them down to the right length.

For the muzzle, I just stuck a spare A2 flash hider on here that I had laying around. It’s only there to help keep my fingers clear of the muzzle.

There’s an MLOK slot down here beneath the barrel if you want to mount a light.

For the sling, Keltec has these tiny little metal attachment points on the back of the frame. I’m really not sure what kind of sling they’re intended for. They might not actually be for a sling at all. Either way, no existing rifle sling hardware that I could find would fit through the tiny loops. But this Peak Design camera sling does fit. People trust these slings to support thousands of dollars worth of camera and lenses that weigh a lot more than this gun does, so I expect it to hold up fine for everyday use. 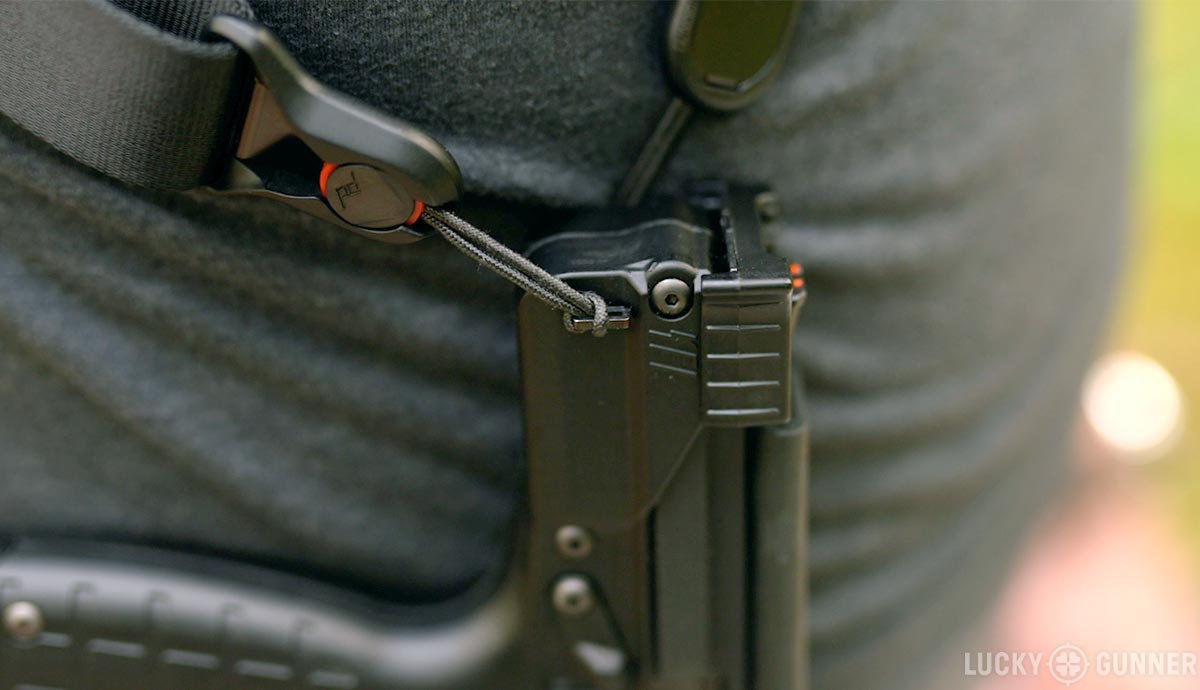 The cheek pistol concept is an excellent idea. It’s a surprisingly effective shooting technique. I would love to see the hardware catch up to that concept. The lack of reliable gun options is really the limiting factor here. Long term, I think it could be a serious game changer, especially if someone actually made a gun designed from the ground up to be a cheek pistol.

In addition to all of this mad scientist stuff, Rhett Neumayer also teaches concealed handgun permit classes in the Denver, CO area completely for free. He does that just as a service to his community because statistically, the people most likely to need a concealed handgun are those least likely to be able to afford it. I didn’t tell him I was going to do this, but if you want to support that effort, head over to the Demonstrated Concepts website and click the donation button. And if you have any allowance money left after that, be sure to buy some ammo with lightning fast shipping from us at Lucky Gunner.

How can you do a 10 minute video about double action carry pistols and not mention Kahr Arms? Does Chris...