There’s a ton of talk out there about an accessory for Glock pistols called the Striker Control Device. It seems like any time this product comes up online, some people want to get out their pitchforks and start a virtual riot. I would like to think that’s the result of a simple misunderstanding. So, before we look at the actual product, let’s talk about why it even exists to begin with.

Hear about all the details in the video below, or scroll down to read a text article covering the “Glock Gadget.”

[NOTE: Some of the technical points in today’s post might not completely make sense if you’re only reading the text version, but if you skip to 5:14 and watch through 6:18 in the video, you’ll see a demonstration that should clear it up.]

Why Use A Striker Control Device

Before Glock pistols first started gaining popularity in the 1980s and 1990s, almost all semi-autos were either single action with a manual safety or double action/single action with a safety or decocker or both. Glocks don’t have any of those things. They are striker fired with just a trigger, a mag release, and a slide stop.

Today, Glocks and other striker-fired pistols are the norm rather than the exception. Shooters appreciate the simplicity of operating a pistol with fewer controls. They are easier to learn and some would say easier to master as well.

Of course, that simplicity has a downside. You’ve got a relatively light trigger with a short length of travel and no external safety. This means there are fewer fail-safes in place to prevent an unintentional discharge if the shooter has less than perfect gun handling. And let’s face it: no matter how well-trained we are, we all make mistakes. I don’t know any shooter who can honestly say they always have perfect muzzle control. It’s rare to find a shooter who can honestly say their finger has never drifted to the trigger when it wasn’t supposed to.

That is why, in addition to the big four gun safety rules everyone learns, there are some additional best practices the training community teaches. In particular, there are some procedures we can use when we’re reholstering the gun, which is when a lot of gun handling mistakes often occur.

Before you move the gun toward the holster, take a brief pause to verify that the finger is indexed on the slide or frame and away from the trigger. Clear the cover garment if necessary, and visually check to make sure the holster is clear of obstructions. Stand or lean in such a way so that the muzzle will not cover the lower body as the gun goes into the holster. Then, slowly and deliberately, reholster the gun.

Those are some great procedures to help reduce the risk of unintentional discharge. There are some people though (like me) who are not totally satisfied with that. When you’ve got distractions going on in front of you, whether that’s at the range or in the real world, people tend to skip some or all of those steps when they’re reholstering. So there’s one more thing you can do depending on what kind of gun you have. With a hammer fired double action pistol, you can pin the hammer with your thumb. That way, it is impossible for the gun to fire, even if there’s a finger on the trigger, or a drawstring or piece of shirt tail gets hung up in the trigger guard.

I really like this practice. After you’ve been doing it for a little while, it pretty quickly becomes ingrained into your muscle memory. Eventually, it’s just something you do. It would require mental effort to holster the gun without your thumb on the hammer. So, even if something crazy is going on down range and you end up doing the stupid no look speed reholster thing, or maybe it’s dark and you can’t really see inside your holster that well, subconsciously thumbing the hammer still helps prevent an unintentional discharge.

The Striker Control Device (AKA “The Glock Gadget”)

Unfortunately, you don’t have that option with a striker-fired pistol because it doesn’t have a hammer. And that is why a couple of really smart guys from the Tau Dev Group developed the Striker Control Device. You might know it as “The Gadget.”

Controversy over the Glock Gadget

Like I said in the beginning, for some reason, the Striker Control Device seems to elicit a lot of anger and controversy. I’m not exactly sure why. It’s not a mandatory upgrade. It’s just an option for people who want to take advantage of an additional layer of safety. Some people might be concerned that it’s going to affect the feel of the trigger pull or that it might cause malfunctions.

I haven’t had any problems with the ones I’ve used. But more importantly, I know a lot of dedicated Glock shooters who have been putting tens of thousands of rounds through Glocks with Striker Control Devices installed. Some of them were beta testers who have been using these things for the last five years or more. I’m not aware of any Glock with a serious problem as a result. I’m sure it’s possible, but I think a lot of the concerns about reliability are theoretical. It might help ease some people’s doubts if they had a better understanding of how this device actually works. 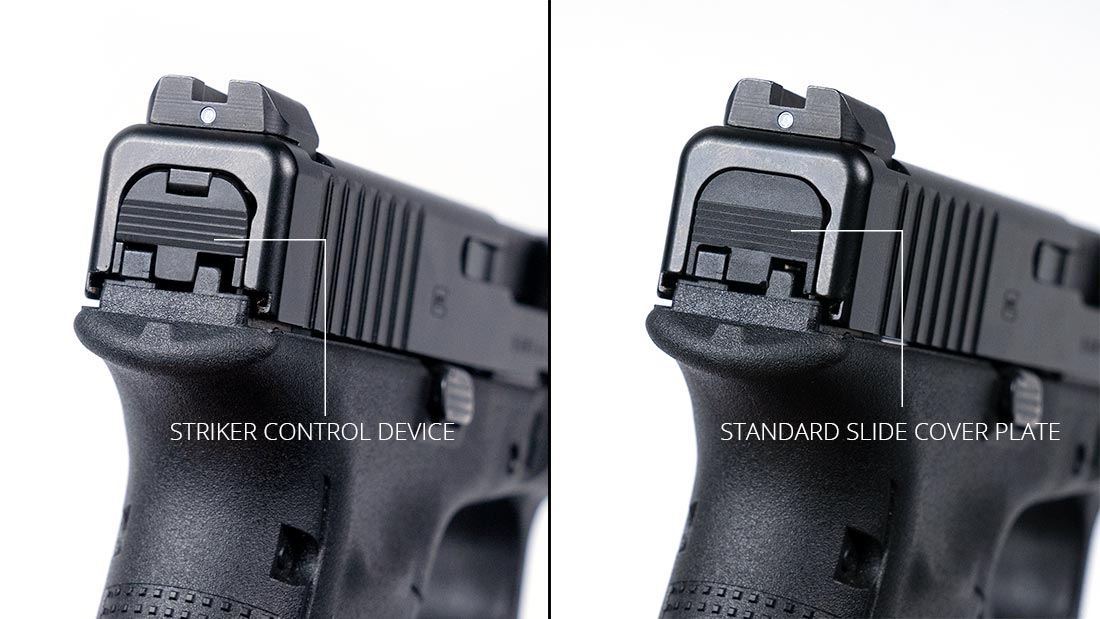 How the SCD Works

It’s a pretty simple concept. First, let’s look at how a standard Glock works with all factory parts. This is the firing pin assembly. The firing pin/striker is partially tensioned when it’s in the slide. Then, when you press the trigger, the pin/striker continues moving rearward. When the trigger press is complete, the spring sends the firing pin forward. I’m going to pop this back into the slide and reinstall the factory slide cover plate…

The firing pin moves back and forth in this channel in the slide and the slide cover just kind of sits there holding everything in place.

So there’s really not much to it. I can see how it might make the trigger press a little gritty if you dunked the gun in a mud puddle or something. That’s not much of a real world concern for most of us.

Striker Control Devices for Other Pistols?

A lot of our readers who know I’m a fan of DA/SA pistols asked me about options in the single stack 9mm or pocket pistol category. Unfortunately, there are very few to choose from. I think the next best thing would be a Glock 42 or 43 or some other subcompact Glock equipped with a Striker Control Device.

Unfortunately, because of the way most other striker-fired pistols are designed, it doesn’t sound like we’ll be seeing similar devices for the Smith & Wesson M&P or Sig P320 or other striker guns any time soon. But they are available for pretty much any Gen 2 through Gen 5 Glock. You can get them from Tau Dev Group’s website. The normal price is 89 bucks but it looks like they’re on sale right now for 79. I think they are well worth it, and I don’t see any reason I would carry a Glock without one.