The biggest problem with the Glock 42 is that it’s not a 9mm, but it turns out that’s not such a bad thing.

Weeks before SHOT Show, rumors started flying about two new Glock pistols. The first was revealed to be the Glock 41, a long slide .45 ACP model geared toward competition. But there was a lot more buzz over the 42, which many hoped and speculated would be a single stack compact 9mm to compete with pistols like the S&W Shield and Kahr PM9. When the 42 turned out to be a .380 ACP instead, the initial reaction from the gun community seemed to be disappointment. Demand for pocket-sized .380s spiked a couple of years ago, but has declined with the introduction of the aforementioned ultra-compact 9mm carry pistols. Drawing further criticism was the fact that the Glock 42 is not quite as compact as many of the other .380s, especially the ubiquitous Ruger LCP.

But despite all of that, the Glock 42 may be just what the .380 market is missing. You can read more about why I think that is below, but first, here’s a quick snippet of our interview with Josh Smithers from Glock. We asked him to make the case for the Glock 42 and why we should consider it over similar carry guns out there.

Why You Should Buy the Glock 42 in 30 Seconds

You can read our full Q&A with Josh below the first impressions section. 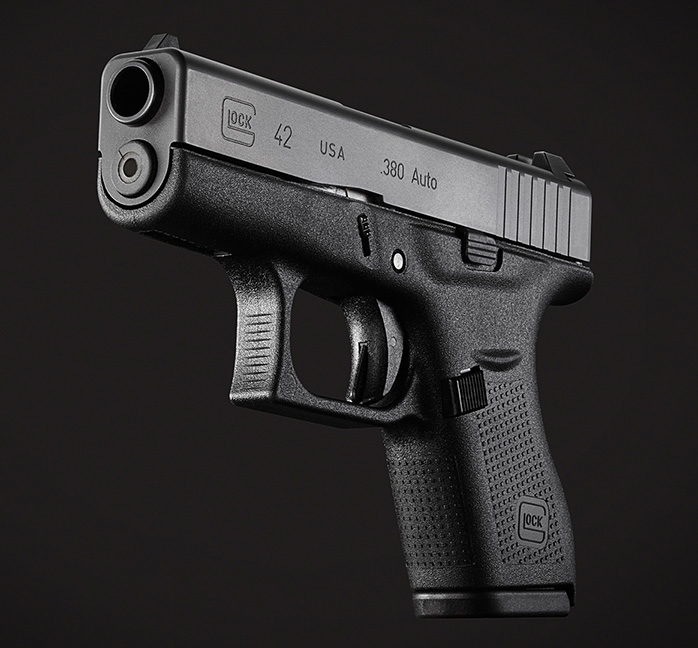 Anyone who’s fired one of the .380 pocket guns knows that they’re no pleasure to shoot. Most of them have long double action trigger pulls, followed by very snappy recoil that, in some cases, is downright painful after a couple of magazines. They are thought of as “last ditch” carry guns that will rarely see much range time.

As an alternative, Ruger has offered the LC380, which is essentially their LC9 compact 9mm rechambered in .380. The recoil is much easier to deal with on the LC380, but it still has the long trigger pull to overcome. It seems Glock decided to skip the “itty bitty” LCP-sized phase and go right to the “still small but a lot more shootable” category with the 42. At the same time, they’ve addressed the trigger issue. The Glock 42 has the same type of trigger as any other Glock; nothing amazing, but certainly usable right out of the box, and much easier to use than most any double action.

I had a chance to fire a few rounds out of a 42 at SHOT show, and I was pretty impressed with it. It felt a little smaller in my hands than a S&W Shield, but there was still plenty to hold on to, and recoil was minimal. I shot Ruger’s LC380 just a few minutes later, and while recoil was similar, the trigger on the Glock was much easier to manipulate. The Glock will not be nearly as cheap as the Rugers, but the $475 MSRP is still not bad, and I think it’ll be an attractive option for folks who think they can’t carry anything larger than a .380, but don’t like getting beat up by snappy recoil. 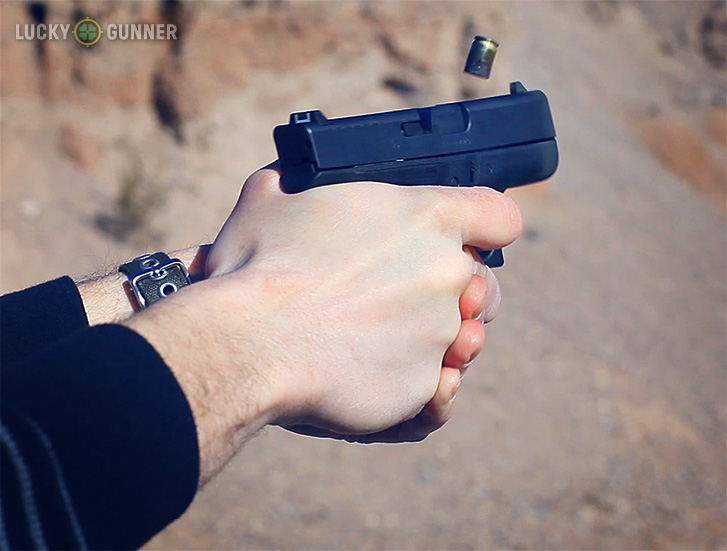 Q&A with Josh Smithers from Glock

Lucky Gunner: If you had to pick one attribute of this gun to talk about as the highlight, what would it be?

Josh Smithers: The biggest highlight of the gun is that it’s the smallest pistol we’ve ever built. This pistol is basically designed around the US concealed carry market. We wanted to build the smallest pistol we could that would be the most reliable pistol and still be in a caliber that would be a defensive carry round, so the .380 is what we decided to go with. You have a standard full-size magazine catch, full-size slide stop lever, abd slightly deeper tang. No finger grooves, but it does have that Gen 4 type texture on it, so it’s still aggressive and you can hold on to it really well. The trigger works exactly like a full size Glock would if you’re already used to that. The take down is also just like the Glocks you’re used to.

LG: Are you guys gonna have any grip extension or extended magazine in case you wanted the grip to be slightly longer?

JS: At this time I don’t know of anything. It just comes with the two flush fit magazines.

LG: It doesn’t look like it has the interchangeable backstraps.

JS: No backstraps, it’s not a Gen 4. We wanted to make this pistol as small as we could. That’s why we cut the tang a little deeper so you don’t have to worry about over-gripping the gun.

LG: I got to fire it a little at the range, and it shoots really nice for its size, but I know some people are talking about how it’s a little bigger than some of the other .380s out there, so how are you guys answering that if they claim it’s too big for a .380?

JS: It’s the the smallest Glock we’ve built, it’s slightly less than an inch wide… and it has a very low height over bore. We kept it almost a square slide so you get a very deep grip. Other manufacturers .380s might be a little smaller but you still have the high height over bore so as far as the recoil and everything it doesn’t control well. You might sacrifice a little in size, but the quality and reliability were the first things we wanted to go into the gun so that was the smallest we could make it and make it reliable and still get the same quality you expect out of a Glock pistol.

LG: Okay, so the big question that you’re probably sick of hearing but everyone is asking. Is the 42 a precursor to a single stack 9mm from Glock?

LG: That’s all you can say for now?