The Bersa Thunder 380 has been a favorite budget concealed carry pistol for well over two decades now. Is it a rare example of great quality at a low price, or is it a typical example of “you get what you pay for”? After years of relentless pleading from Bersa Thunder fans, we finally got around to buying one to find out for ourselves.

Hey everybody, I am Chris Baker from LuckyGunner.com where you can order all the ammo you need with lightning fast shipping. This is a Bersa Thunder 380. It’s a double action/single action subcompact pistol made in Argentina and chambered for, you guessed it, .380 ACP.

I have been putting off reviewing this gun for a very long time. I first started hearing from Bersa Thunder fans back in 2016 when I was doing a lot of videos about double action/single action pistols. They came out of woodwork again to ask why I did not include the Bersa in my .380 Pocket Pistol Round up a couple of years ago. Then, last month, I covered the Walther PPK which is not a great pistol, so I offered several alternatives. But I didn’t mention the Bersa Thunder among them. So several of you — 129 by my last count — pointed out that oversight for me in the comments.

Apparently, I have been ignoring the Bersa Thunder for far too long. So we finally bought one the other day and I’ve been shooting it and now I’m going to tell you what I think of it.

Bersa makes a wide variety of pistols under the Thunder brand. The subcompact blowback-operated Thunder like this one is available in .380 or .22 LR.

The Thunder I have here is the single stack version with an 8-round magazine and the basic matte black finish. The gun only comes with one magazine, which was kind of disappointing. We bought a couple of spare mags, but we couldn’t find any Bersa factory mags for sale anywhere at any price. So I had to resort to ProMag brand magazines, which, generally, you should never do unless you just really like practicing malfunction clearance drills. 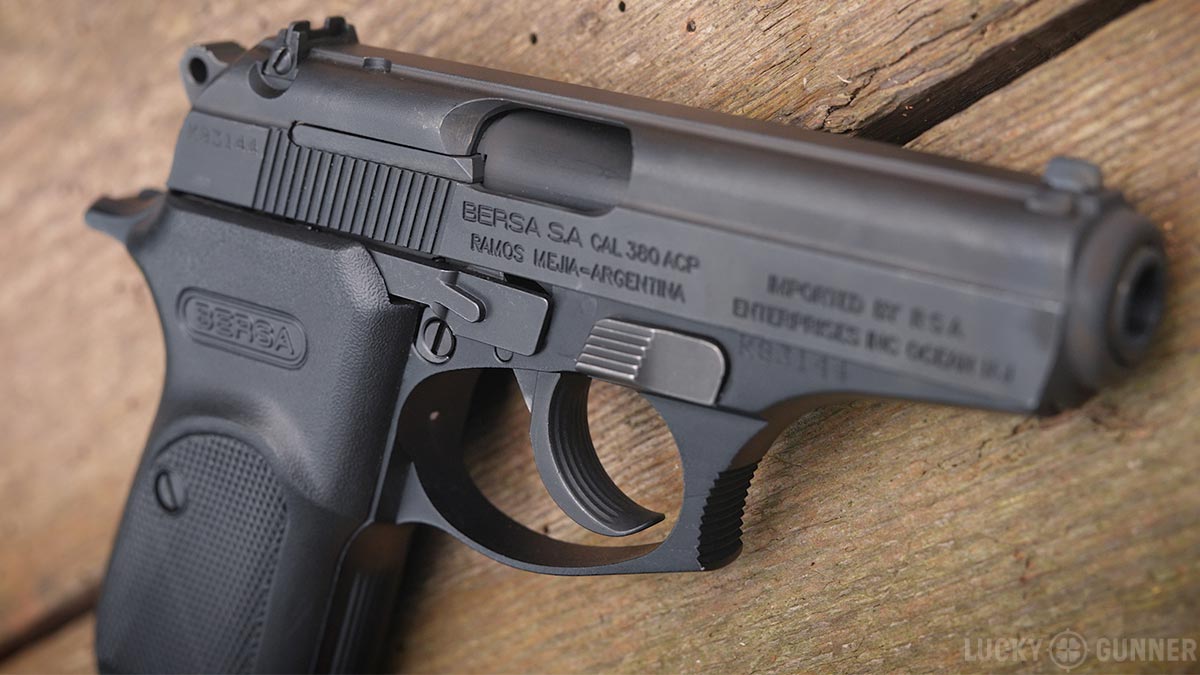 Fortunately, in this case, the ProMags didn’t give me any trouble. In fact, I’ve only had a single malfunction in the 400 rounds I’ve fired through the Bersa so far. It was a stovepipe style failure to eject that happened when I was using the factory magazine with Speer Lawman ammo.

That’s not ideal, but also not a deal breaker as long as it doesn’t keep happening. Otherwise, I was pretty impressed with how this gun handled at the range. I ran a few drills with it and managed to pull off some decent times (decent for me, at least). The sights are not bad for basic three-dot sights. The rear sight has a blade insert that’s adjustable for windage with a small screwdriver. As usual, I blacked out the rear sight dots with a Sharpie to get better contrast against the front sight. Both the front and rear sights sit in dovetail cuts in the slide, so you can upgrade them later if you choose.

The trigger on this gun is surprisingly good — especially the double action. It’s not just good for a budget pistol, it’s a good trigger by any standard. A lot of you guys know that I’m a huge fan of double action/single action pistols. I shoot those more than any other type of action. I’d say the Bersa Thunder has a trigger on par with any factory trigger from Beretta, Sig, or CZ. The double action is smooth and breaks right at 8.5 pounds. The single action measured 4.5 pounds. For a carry pistol, it’s a really nice balance of easy to shoot when you want and easy to not shoot when you don’t want.

I’m not as crazy about the decocker/safety lever. It’s mounted toward the rear of the slide like a PPK or a Beretta 92. But it’s kind of stiff and awkward to use. I have a tough time decocking the gun without completely breaking my firing grip. It’s going to be even more awkward if you’re left handed because there’s no safety lever on the right side of the slide.

In addition to the manual safety, the Bersa also has a magazine disconnect safety as well as an integral trigger lock that works with an included key. Some shooters are, understandably, turned off by extraneous safety features like these, but I found them to be pretty innocuous and easy to ignore.

The Thunder 380 has often been called a clone of the Walther PPK, but I don’t think that’s quite accurate. The two do have a lot in common in terms of basic design and overall shape. But while the PPK has been mostly unchanged over its 90-year lifespan, the Thunder is a much more evolved example of a subcompact blowback pistol. 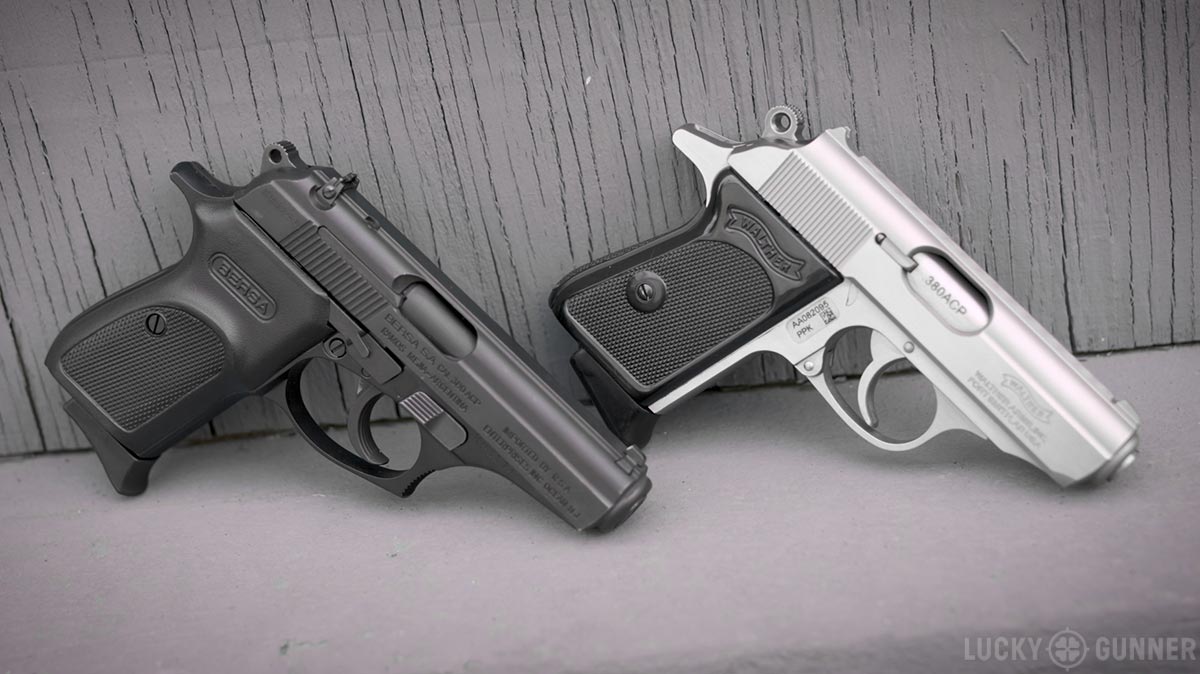 It’s got larger and much more usable sights. The trigger is lighter. It’s easier to disassemble for cleaning. The grip is far more comfortable, and, at least for me, did not cause any of the issues with slide bite that I had with the PPK. And even though it’s a little larger than the PPK, the Thunder is a few ounces lighter thanks to a frame that’s made from aluminum alloy rather than steel.

So it’s a huge improvement over a pistol that’s nearly a century old, but the Bersa Thunder is not exactly cutting edge. It first came out in the mid 1990s. Considering the huge advancements we’ve seen in the concealable pistol industry in the last few years, that makes the Thunder seem a bit dated by comparison.

Today, the concealed carry market is flooded with pistols roughly the same size as the Bersa Thunder that are chambered for the more powerful 9mm cartridge. Thanks to superior ergonomics and the fact that most of these guns are recoil operated rather than blowback, many of them actually have less felt recoil than the Bersa. They are easier for beginners to learn with and experienced shooters will find them more comfortable over long range sessions.

Some shooters will insist that they have to carry a metal-framed double action/single action pistol. And if that’s the case, the Bersa is among the very few subcompacts in current production that fit that description. But I think the main reason the Bersa Thunder has generated such a huge following has a lot more to do with the price tag. Most versions of the Thunder 380 have an MSRP of roughly $300, which puts it among the most affordable new handguns on the market today.

I really enjoy finding cheap guns that actually work. For example, my favorite micro-sized pocket semi-auto is the humble little KelTec P32. It looks and feels like a cheap piece of junk. But it shoots far better than most other pocket pistols, and they’re usually surprisingly reliable. Having said that, I am not the only person to notice a strong correlation between new pistols under $300 and pistols that tend to have serious issues with reliability. I don’t dismiss budget guns, but I do view them with a healthy amount of skepticism. 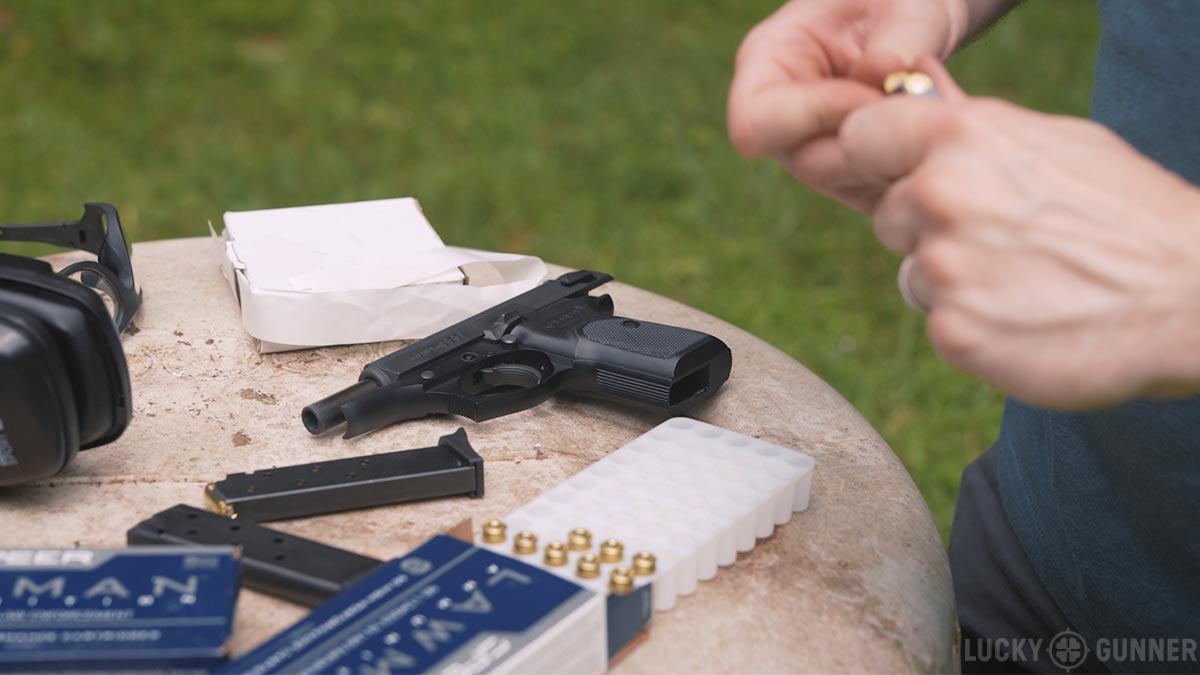 This particular Bersa Thunder 380 has been pretty reliable so far, but it’s just a sample size of one. Whenever I can, I like to find out if my experience is typical for a given pistol. So I got in touch with some of my friends in the shooting industry. I asked shooting instructors what they had witnessed with Bersas their students brought to classes. I asked friends who had worked behind gun counters and rented out Bersas at shooting ranges. Normally, this kind of informal survey will lead to a pretty strong consensus as to whether a particular gun is complete garbage or not. In this case, the feedback I got was very mixed.

About half of the people I talked to owned Bersa 380s that have run just fine for thousands of rounds. Or they maintained rental Bersas that worked for years and outlasted some more expensive and more reputable pistols. They generally seemed to think it was a pretty good pistol for the money, even if it’s a little outdated.

On the other hand, some of the instructors said they have witnessed numerous students struggle with Bersas that refused to function. A couple of them saw Bersas completely fall to pieces after just a couple hundred rounds. Some of the gun shop employees said that Bersa Thunders were among the guns customers brought back in for warranty work most often. So, like a lot of gun companies, it sounds like Bersa has, at times, struggled with consistent quality control.

This was far from a scientific survey. These were just the general impressions from fifteen or so people whose opinions I trust. I don’t want to jump to any definitive conclusions about whether the Bersa Thunder is good or bad. But it’s a reminder of just how important it is to test fire any pistol before you rely on it for self-defense. Of course, you want to practice and familiarize yourself with a new gun. But you also want to check whether it’s mechanically sound and that the way you grip the gun doesn’t cause any kind of user-induced malfunctions.

I personally try to fire at least 300-500 rounds through a new gun without any problems before I carry it. Since I had that one failure to eject with this Bersa, I’d want to fire at least a couple hundred more rounds through it without seeing that problem pop up again before I’d really trust it. But that’s a standard I would use for any pistol, regardless of the price or the manufacturer.

The problem is, if you’re looking at the Bersa Thunder because you can only afford to spend $300 on a pistol, you probably can’t also afford to run 300 rounds through it just to find out whether it works. And buying a more expensive pistol doesn’t necessarily fix that problem, because no company is batting 1000 and you still need to test fire it. 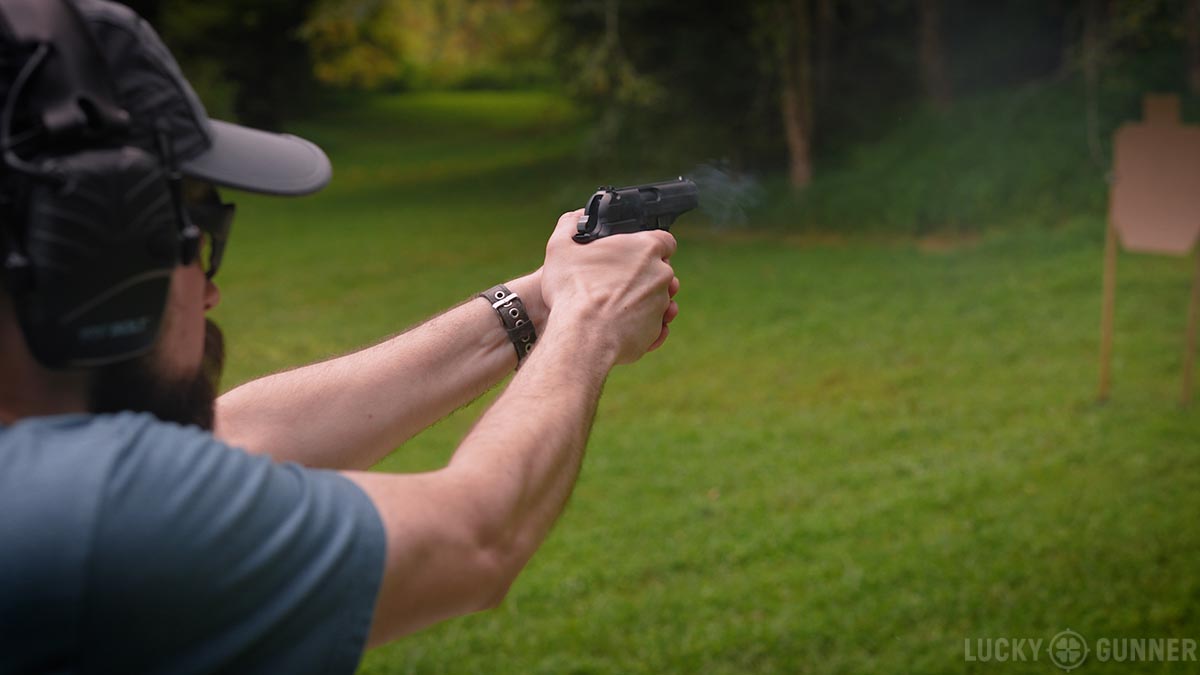 For some people on a budget, it might make a whole lot more sense to buy something like a .22 pistol and 500 or 1000 rounds of ammo versus a 380 or a 9mm and 100 or 200 rounds. Carrying a gun that shoots bigger bullets isn’t really much of a benefit if it means you have to forego practice and reliability testing.

If you’re not on a super tight budget, but you’re looking at the Bersa Thunder because you like the idea of a .380 pistol that’s this size, you might also consider the Smith & Wesson Shield EZ 380. It’s roughly the same size as the Bersa Thunder and it has the same ammo capacity. But it has far less felt recoil. I think it’s more enjoyable to shoot and it’s more novice-friendly, even if it lacks the cool-factor of the Bersa Thunder. These days, the basic model sells for around $350 to $400.

The Thunder 380 does have a lot to offer for a budget pistol. It’s probably one of the best options available in the sub-$300 range. If you get one that works and you don’t mind something that’s a little on the snappy side for a .380, it’s a really good value for a subcompact carry pistol.

Guys, if you found any of that to be helpful, do me a favor and hit the like button and subscribe to our channel. That helps other people find our videos. If you’ve got any topics or questions you think I should tackle in a future video, shoot me an email using our contact form.

The Walther PPK Is Not Very Good