Editor’s Note: This article is part of our ongoing testing of the 9mm Glock 43.  We’re looking at how the G43 performs long term, and how it stacks up against popular carry pistols like the six we reviewed in our big 9mm Single Stack Shootout last year. Be sure to check out the Glock 43 first impressions review if you missed it, or read on to find out what Jim thinks of the G43 compared to the Sig P938.
–CB

The last thing shooters should be concerned with in an emergency situation is how to use their concealed weapon. This is why I strongly suggest gun owners who already run a full-sized pistol and are looking for a concealed option, choose something with identical controls. I zealously adhered to this mantra when choosing my pocket gun, but that caused some conflict since my two most familiar firearms are the Glock 17 and the 1911. Further limiting my choices to a bare minimum caliber of 9mm Parabellum, I was left with two guns: the Sig Sauer P938 and the Glock 43.

Before I go into comparing the various features and attributes of both handguns, I have to admit that I was given a custom P938 from Sig Sauer last year, so I already owned one prior to the release of the G43. I could also be called a Sig fanatic. That said, I hadn’t made the decision to carry it until recently, and I think it makes an excellent alternative to the G43, though with a vastly different approach to developing a full-powered concealed carry pistol.

Both pistols are chambered in standard 9mm Parabellum, are semi-automatic, and feed from detachable magazines. After that, however, the similarities basically end. To better understand and compare these handguns, let’s fully define both.

The P938 is a locked breech, magazine-fed semi-automatic pistol that ostensibly resembles a shrunk-down M1911. It’s a hammer-fired, single-action only pistol that uses a thumb safety like a 1911, though it lacks a grip safety. The frame is built from aluminum, and the slide is steel.

The Glock G43 is also a locked-breech semi-automatic pistol, but it is striker-fired, and the frame is built from steel-reinforced polymer. The slide is built from steel and finished using the same ultra-tough tenifer process as its full-sized brethren.

Despite my love of Sigs, I’m going to break down the two pistols and compare them across four different attributes to arrive at an objective conclusion. Things like price and cost of ownership are going to be ignored for the sake of a purely performance-based review.  I’m of the mindset that, when choosing a concealed carry pistol, shooters who value their lives and the loved ones should prioritize performance over price. That said, the four areas of comparison include accuracy, reliability, ergonomics, and concealability.

Let’s begin with accuracy.  When using short-barreled firearms, velocity, and therefore power, are lost in pursuit of compactness. So, shooters looking to maximize their compact pistol’s effectiveness need to especially focus on shot placement. Accuracy is paramount when doing so. However, according to FBI statistics, most self defense shootings take place within 14-yards. Therefore, practical accuracy is good enough provided that either pistol can achieve “minute of open hand” at that distance. 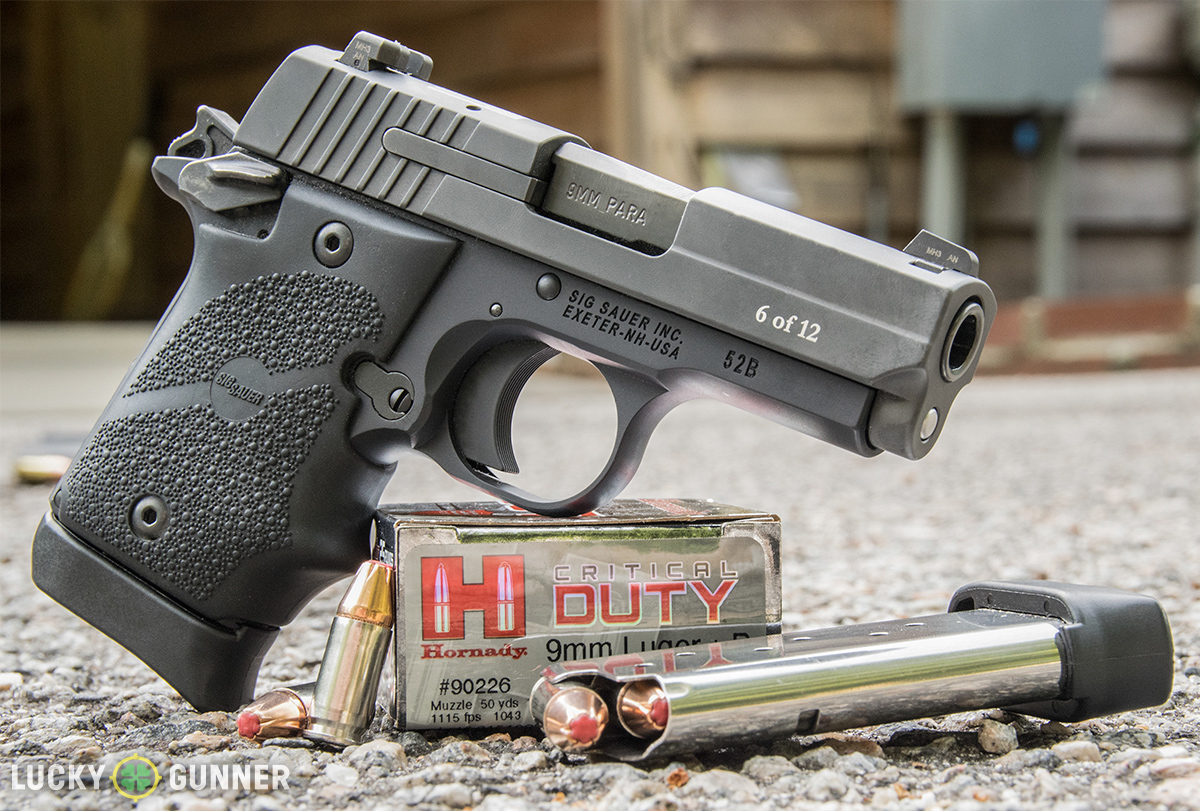 In testing, both pistols produced remarkable groupings for their size, though one’s design did more to assist shooters in achieving this. The G43 has a good trigger and usable sights. However, the Sig’s smooth, short single-action trigger coupled with its brilliant tritium night sights definitely help produce more accurate shooting. Both handguns could benefit from having their rear sights blacked out to encourage shooters to focus on the front sight, but the SIG’s superior trigger and iron sights give it an edge in this department.

While accuracy is absolutely important in concealed carry pistols, reliability is arguably more so; if a gun doesn’t run, accuracy is irrelevant, right? On paper this is no contest. Glocks are the gold standard for dependability, while 1911s have a history of being ammunition sensitive. The truth is more complex than that, but neither of these compact pistols are their big brothers. 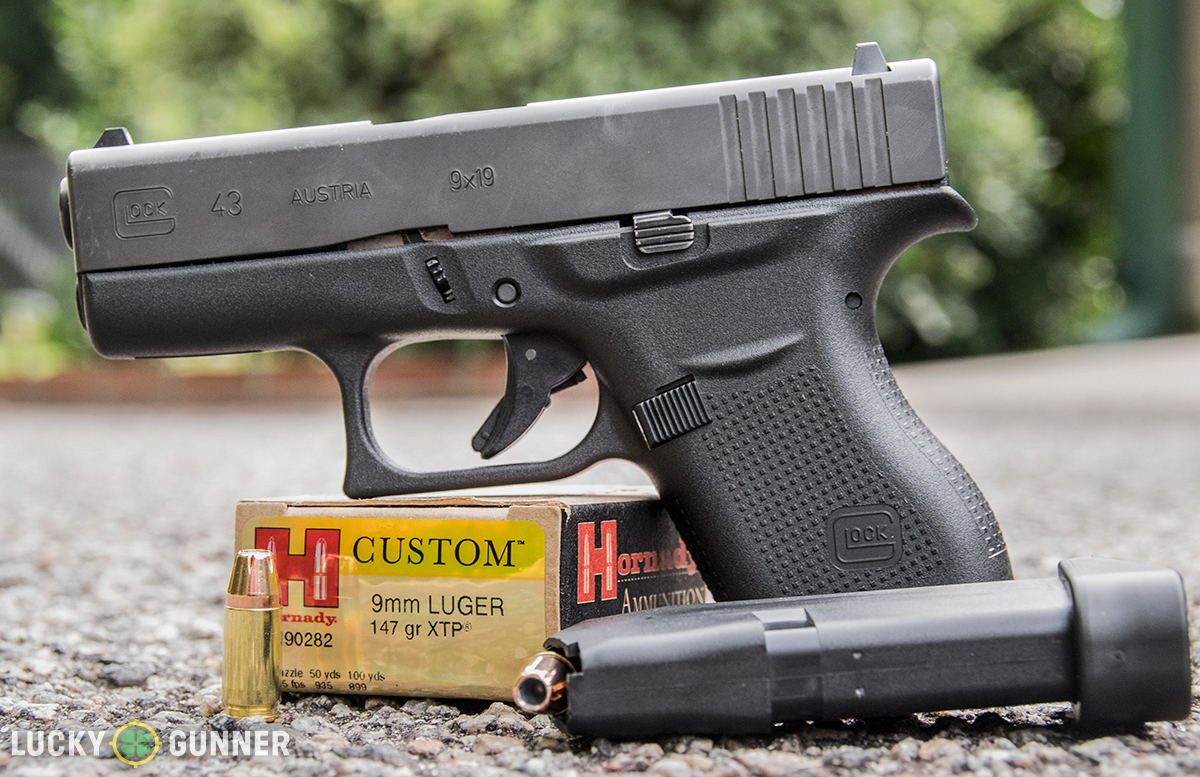 The engineering hurdles involved in miniaturizing a device that contains thousands of pounds of pressure mere inches from a soft, relatively fragile human being are momentous and frustratingly numerous. Thankfully, both companies have some of the finest engineers on the planet working for them.

Still, one design does come out slightly ahead for purely human reasons rather than mechanical. Having carried both for months, the Sig P938 does have one design quirk shooters should be familiar with.

Right-handed shooters properly keeping their index finger off the trigger while racking the slide can accidentally lock the action by depressing the slide stop lever pin. This is easy to fix by simply pushing the pin back from the left side, but shooters in the midst of an adrenaline-fueled firefight may fumble the reload. This issue can be resolved with proper training, imprinting muscle memory to both keep their trigger finger away from the pin and to clear the malfunction. While not a deal-breaker, the Glock G43 didn’t suffer from anything like this.

The first thing a shooter notices when they pick up a new gun is how well it fits them. Less-experienced shooters often have a difficult time with this since they have no basis for comparison. That said, ergonomics are a crucial part of shooting, one where bad habits and good fundamentals are made or lost.

Ergonomics are also a very difficult part of any firearm to review, since it’s very subjective. Ultimately, shooters should try and hold each gun before making a decision, but that’s not always a possibility. A good rule to follow when shooters are trying to decide between two guns is that too small is generally better than too big, except with Derringers and other hide-away guns. While this absolutely applies to long arms, full-sized, and even compact firearms, subcompact and micro guns defy this rule.

Since most concealed carry pistols are small enough that anyone can comfortably hold them, if one is too small, it probably doesn’t offer enough purchase for a shooter to control its recoil or properly grasp it. Keeping this in mind, the P938 and G43 are basically equal, though the Sig offers a wider selection since its grips are interchangeable. I’d argue that when wearing Hogue wraparound grips like the model shown, the P938 is much easier to shoot and control than the G43. The downside of these is that they increase the grip diameter and consequently decrease its concealability.

Really, all of this is relative since both handguns do a fantastic job of soaking up the 9mm round’s recoil. Unlike traditional concealed carry pistols, which are truly punishing to practice with, both of these pistols are actually enjoyable to shoot. While the Sig may have a slight advantage with rubber grips, neither pistol is painful to shoot even after several boxes of ammunition. So, for all intents and purposes, it’s a draw on ergonomics.

Lastly, the best shooting, most reliable pistol ever made is useless as a concealed carry pistol if it’s the size of a Desert Eagle. What’s great is that both pistols are small enough to pocket carry, so this part of the comparison is mostly academic. 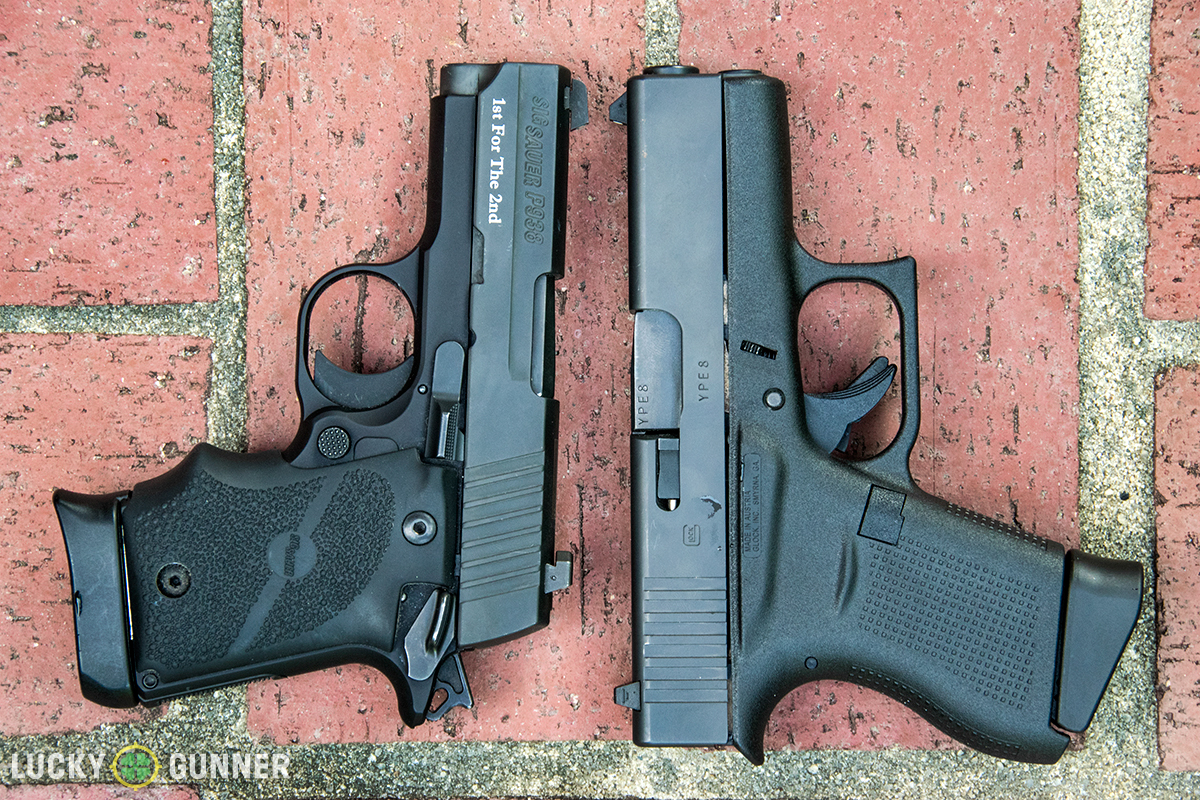 The G43 is very slim and short. Further aiding its concealability is the inclusion a a flush-fitting magazine alongside a more ergonomic mag equipped with a finger extension. The Sig also ships with two magazines in this same configuration and equally benefits from them. Additionally, both pistols feature dehorned edges that help prevent snagging on clothing when drawn from concealment. It’s important to note that neither pistol will properly conceal in the pocket of skinny jeans or truly form-fitting apparel. Still, shooters don’t have to entirely dress themselves around the gun.

So, which should shooters buy if they’re looking for a pocket pistol for concealed carry? It depends on personal preference and also personal style. When I want to carry while wearing semi-form-fitting jeans, I’ll go for the G43 since it’s slightly less bulky. If I’m at a formal event with dress pants, the P938 discreetly slips into my pocket and offers superb ergonomics and amazing accuracy.

This may seem like a cop-out answer, but since both firearms are a mature technology and both manufacturers have decades of experience making quality products, neither is going to release a lemon. That isn’t to say this comparison is akin to apples and oranges, but more like green apples vs red ones. Some folks prefer one over the other, while some switch between the two depending on the day.

For me, the decision was practical and economic. I already owned the P938, a holster and three magazines, and I am able to hit human-sized steel targets out to 50 yards with it. It required no additional investment, and I am already very confident in my abilities with it. However, after firing hundreds of rounds through both, I can say without a doubt, either one is a solid choice. Just be sure to train regularly and realistically. No gun can make up for lack of training.

Since I started carrying a handgun on a regular basis, I've tried dozens of different carry guns of all types;...