Your Gun Is Going to Break

As I was running some 9mm self-defense ammo through the chronograph the other day, I noticed something off about my Smith & Wesson M&P Compact. The rear sight was just a little bit… not there.

This occurred sometime after already having fired a few hundred rounds during that same range session. The sights were just fine at the start, but at one point I started noticing a slight shift in the point of impact on the target. After a few more rounds, the rear sight sheared in two. The bottom half stayed securely tucked in the dovetail on the slide while the top half freed itself from the pistol altogether and found a new home nestled in the grass next to my feet. 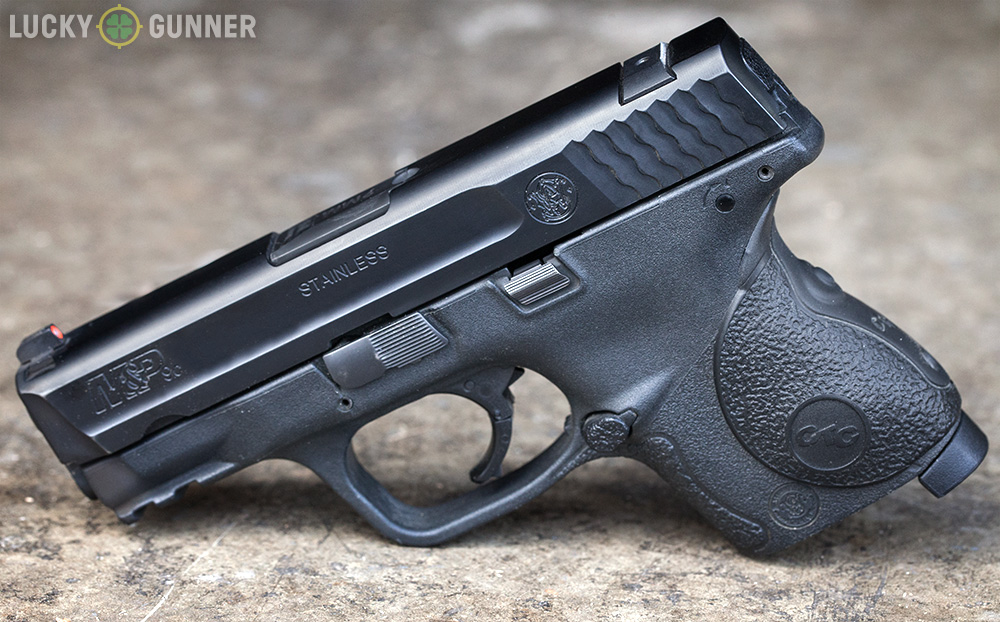 But that can’t be possible. Iron sights are supposed to be the one part of the gun that’s indestructible, failure-proof, and forever reliable. Right? Well, not this time. Guns are machines and machines break. If you use any gun long enough, eventually something is going to go wrong. And every now and then, the problem might be with a part you least expect.

No Substitute for Redundancy

Losing the sights on my carry gun was a bit disconcerting, but I did get a laugh out of it. In multiple articles and videos here on the Lounge, I’ve promoted the use of laser sights for self-defense pistols. Every time I mention it, there’s a contingent of nay-sayers who insist that they don’t want any fancy electronic doo-dads on their gun and they’ll stick to the tried and true iron sights, thank you very much. So I did find it a bit serendipitous that, even without functioning iron sights, I was able to finish my chrono testing that day thanks to the Crimson Trace Laser Grips I have on my M&P. 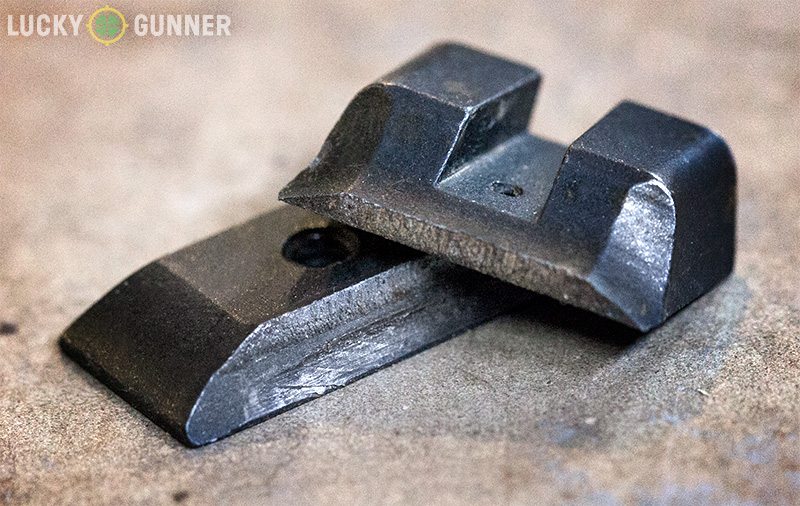 Do laser sights and optics fail? Of course they do. Iron sights do too. Even if they don’t fly into pieces as dramatically as mine did, sights can fail in other ways. When lighting conditions make the sights too difficult to see, they have essentially failed. If they get accidentally bumped and go out of alignment, that’s another potential failure. Even the most reliable parts and the most reliable guns fail eventually. You can do things to reduce the probability of a failure, but you can’t eliminate it entirely. 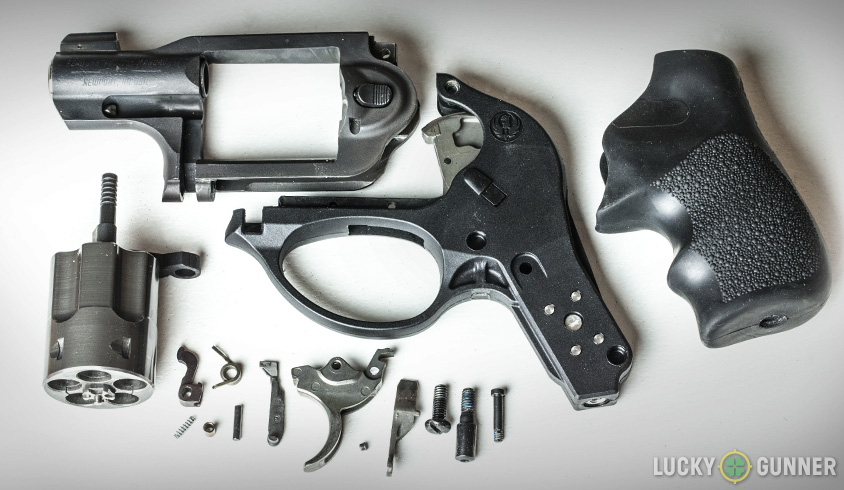 That’s where redundancy comes in. When even the unbreakable stuff breaks, having a backup can save the day. You’ve probably heard the cliché “two is one and one is none.” I’m reluctant to repeat that one because some people often use the phrase to belittle anyone that they perceive as being less prepared than themselves. Everyone has different standards for preparedness based on their own perceived risk profile. But I think everyone should consider where redundancy in their self-defense gear might make sense, whether that means a second sighting system on their gun, carrying an extra magazine, or simply a spare flashlight battery.

So Why Did It Break?

As an aside — since I’d be asking the same thing if I were reading this — I have an idea of why the M&P sight may have broken. The sights were an aftermarket set that I installed myself several years ago using a sight pusher tool. If you’ve never used one, they’re pretty nifty devices. You just remove the slide from your pistol and clamp it into the tool with the top of one of the sights in line with the pusher block. Then you turn the handle on the shaft and the pusher block eases the sight in or out of the dovetail. 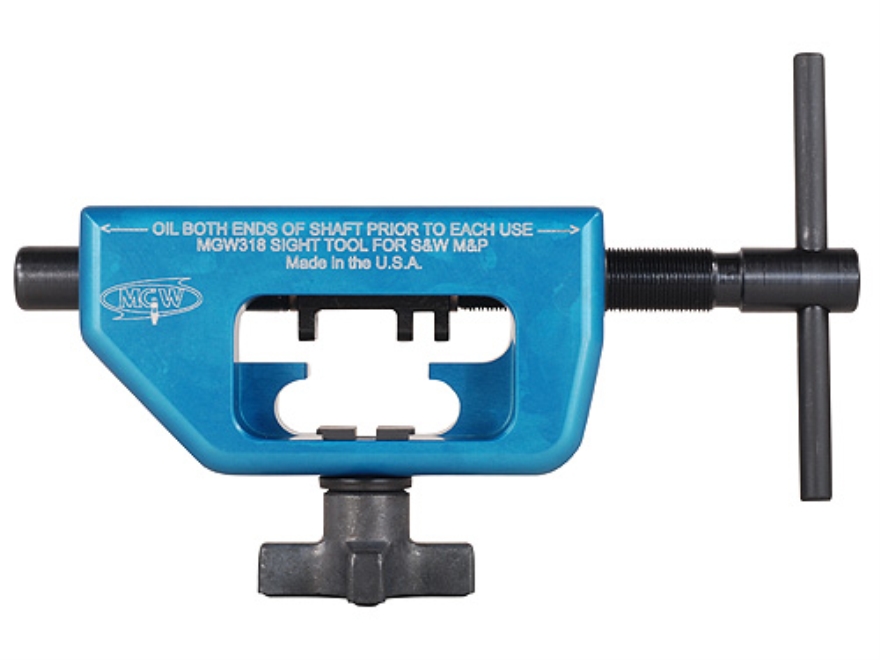 Normally, this doesn’t cause any problems… unless you get a tight-fitting sight and a stubborn excuse for a kitchen table gunsmith like yours truly. When installing a sight into a dovetail, if it doesn’t go in pretty easily you’re supposed to carefully file the bottom of the sight a little bit at a time until it fits. But if you’re like me, you just apply some extra elbow grease to the sight tool until it forces the sight where needs to be.

Because of the shape of the rear sight on the M&P, the top of the sight — the part that takes all the force of the sight pusher — is offset from the bottom portion that actually slides into the dovetail. So when brute-forcing it in with a sight pusher tool, a considerable amount of sideways force is being transferred through the thin joint that connects the top and bottom of the sight. Everything looked normal at the time, but I suspect that this metal joint was significantly weakened during my ham-handed installation process. Five years and many thousands of rounds later, the weakened sight finally gave up and quit holding on.

So lesson two: yes, something on your gun will break on its own eventually, but it will break a lot sooner if you help it along.

Revolvers: Not Just for Old Guys

Hide your Glocks! Hide your Sigs! It's Wheel Gun Wednesday! Every Wednesday, I’ll be exploring a topic related to revolvers as...