As a former military member and current civilian shooter I have always found it interesting how military shooting trends have influenced the world of civilian shooting.

For example, if you own an AR-15 today then there’s a good chance you either own or have at least considered buying a vertical fore grip. Forward grips may be the most popular tactical rifle accessory out there today, but few truly understand why they came about in the first place and what they were actually designed to do on modern rifles.

Today, we’re going to take a look at the reasons why vertical fore grips became popular, and more importantly, how misunderstanding their purpose may be negatively influencing your shooting form. 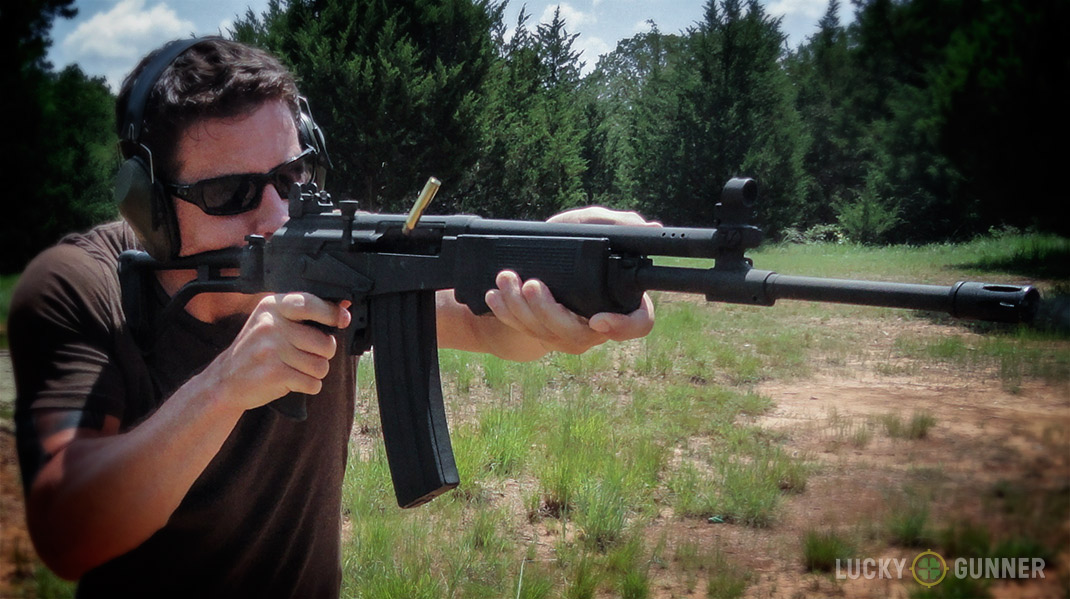 In order to help us understand why vertical fore grips are useful, let’s take a look at why they were first introduced.

Forward pistol grips saw their first widespread use on submachine guns during the 1930’s and 1940’s, and the famous Thompson submachine gun sported one as early as 1918. Several factors prompted weapon designers to utilize a vertically-oriented forward hand grip (often making clever use of the weapon’s magazine in the process).

A vertical fore grip allowed the submachine gun’s muzzle to be more effectively pulled downward during automatic fire and it also kept the shooter’s hand away from the hot barrel. For decades after WWII vertical fore grips remained a feature almost entirely unique to submachine guns, but they would eventually become synonymous with tactical rifles, and the AR-15 platform in particular.

The current popularity of vertical fore grips on rifles began in the mid 1990’s when U.S. special operations personnel began using the SOPMOD kit. The SOPMOD kit was a collection of various M4A1 rifle accessories including lights, lasers, and optics for both daytime and nighttime use.

One of the items issued in this kit was a Knight’s Armament vertical forward grip, and it was included in order to deal with the problem of the forward rails becoming too cluttered to hold correctly when the other accessories were mounted. It also retained the benefits of recoil control and heat mitigation that made it a popular feature on submachine guns.

Despite this rather unique role, AR-15 vertical fore grips soon became a staple accessory for anyone with a rail to mount one on which has led to rampant misuse and poor shooting form. 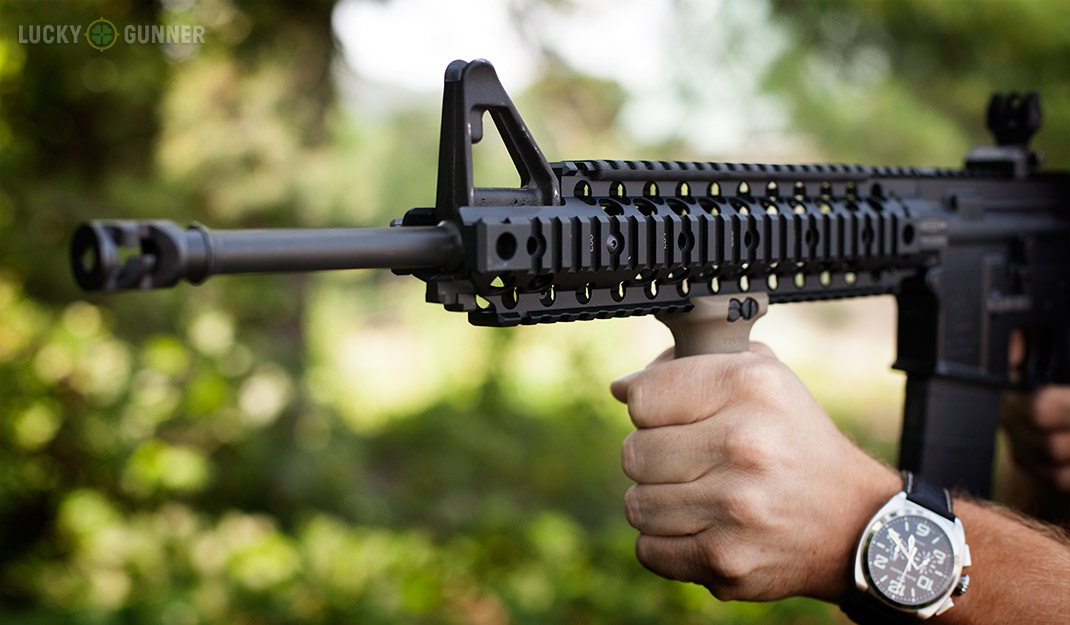 The main problem with people using vertical fore grips is that they’re using them the way they were designed to be used, but on rifles they were not designed for. Gripping the forward pistol grip should only be done as a last resort when there is no other place to put your support hand, such as when your forward rail space is taken up by essential equipment or when there is insufficient fore end space to begin with.  This is because we give up a lot of muzzle control when we shift our hands farther from the barrel, mostly due to a thing called proprioception.

Proprioception is our ability to intuitively know where our limbs are in space and is the reason you can do things like clap your hands in the dark. The problem is that this awesome ability only goes as far as our body parts do, and the farther we get from our hands the more guesswork our brain has to do to put whatever we’re holding in the right spot. Even people who swear by gripping their forward pistol grip or magazine-well understand this concept because they will always grip as close to the barrel as they can. When we grip the rifle with our support hand we want to have the most control over the gun as possible, which leads me to…

How to Use an AR-15 Foregrip Correctly

In order to obtain maximum control over the muzzle of our rifle, we want to let our intuitive functions such as proprioception do as much work for us as possible, and for most people this means gripping farther out and higher up on the fore end. By gripping farther out on the fore end we put our support arm more in line with the barrel, which will help us point faster, more intuitively, and with greater precision.

By gripping higher up on the fore end we put the line of the bore closer to the center of our hand for better spatial awareness and we also enable ourselves to exert a downward pressure on the front of the gun in order to counteract muzzle climb.

We also want to put all of our body-mass to work for us when we shoot. By slightly bending the knees and leaning forward at the waist we provide a more aggressive and stable backing for the rifle’s stock.

The torso’s center of mass should be directly above the balls of the feet, much like a fighting stance. It’s also important that you do not lock your support arm, as this will prevent your elbow joint from being able to absorb recoil impulse or small body tremors. This shooting technique is relatively new, but has dominated in competitive matches such as 3-gun competitions where shooters must be both fast and accurate. 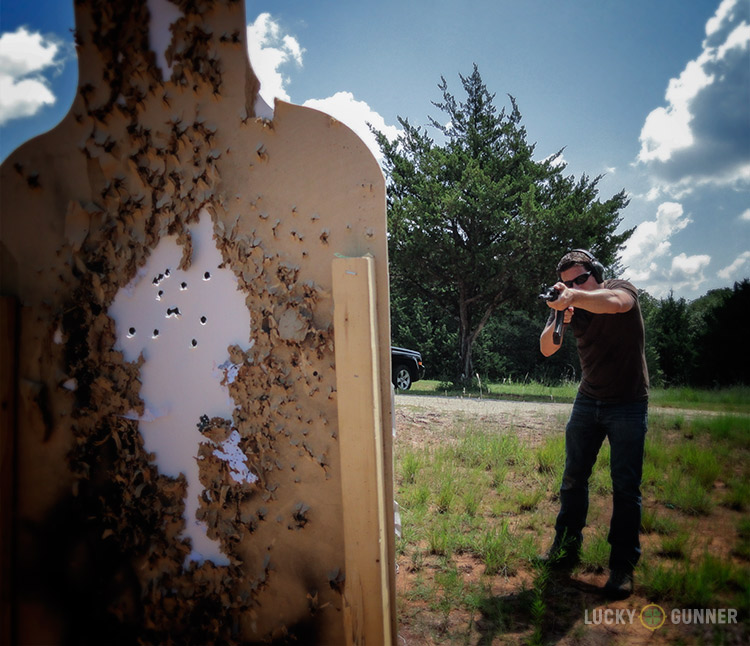 A popular derivative of this technique is known as the C-clamp method. This technique involves wrapping the support hand thumb over the top of the fore end in order to pull the rifle into the shoulder and to better control muzzle climb. I do not prefer this method because it does not allow for natural pointing and will obstruct iron sights on many rifles such as this AK clone. 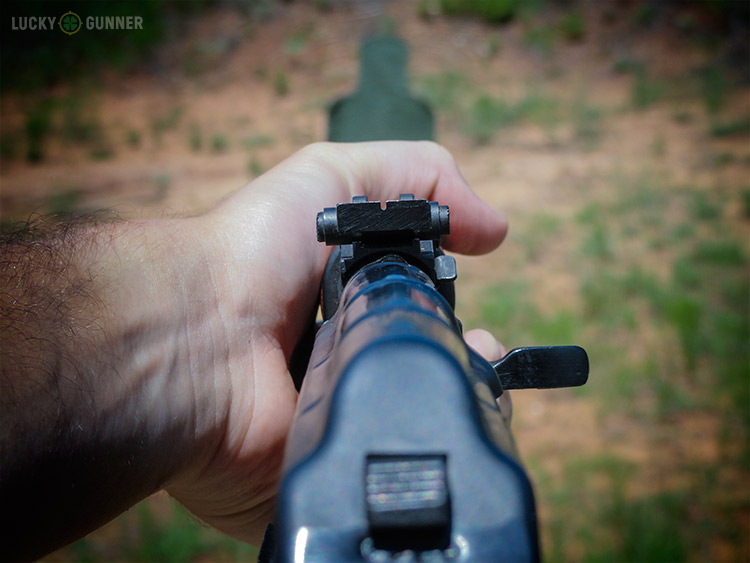 All is Not Lost

Even though they might not serve their originally intended purpose on most rifles, a vertical fore grip can still be an excellent tool for almost any shooter. Vertical fore grips can help a lot with practical shooting technique by providing a stable spot on the fore end to index our support hand grip off of, as well as to allow the rifle to be firmly seated in the shoulder by applying rearward pressure.

There are also several options in the way of angled fore grips like Magpul’s AFG which help users get a proper support hand grip without the wrist strain that some shooters experience when gripping high on the fore end. For a minimalistic support hand aid, you can try something like LaRue Tactical’s HandStops which give your support hand a low profile anchor point on the fore end.

No matter what grip you might use and how you might use it, remember that every shooter is different and that what works for one may not work for another. This guide should not be taken as the only way to properly shoot a semiautomatic rifle, but for many without training it can be a good place to start improving.

What’s most important is practicing and applying the fundamentals of marksmanship at all times and selecting the gear that allows you to do that the best. Be sure to lets us know what foregrip you like best below in the comments!