Welcome back to our Shooting 101 series! So far we’ve covered the absolute basics of how to use revolvers and semi-automatic pistols and now we’re moving on to the most popular rifle in America: the AR-15. Today we’re going to look at how to load, unload, and fire an AR-style rifle.

A ton of people have purchased ARs in the last 10 years or so, and a lot of these people are either first-time gun owners or brand new to the AR platform. If you fall into one of those categories, this post is for you. I can’t teach you how to be a great marksman in just a few minutes, and I don’t want anyone to think that a video or an article can take the place of real, in-person training from a qualified instructor. However, this should get you going in the right direction so you at least know how the gun works and how to handle it safely.

You can watch the rest of this tutorial in the video below, or scroll on down to read the transcript.

If you’re new to shooting, we really have to start out with a couple of basic guidelines for safety. And safe is a relative term. Anything we do with firearms is inherently dangerous. Every time you pick up a gun, you are making life and death decisions — that’s something you can’t ever forget. Fortunately, we can mitigate a lot of that risk by following the four basic rules of safe gun handling. There are different ways to phrase these rules, but here’s my summary:

There’s a lot more to using a gun safely than just the four rules, but if you follow them, you greatly reduce your chance of unintentionally hurting yourself or someone else.

There are multiple ways to do just about everything I’m about to show you. These aren’t necessarily the correct or only methods for handling and operating an AR-15, and the way you use the gun is going to change depending on the context, whether that’s long-range precision shooting, practical competition, or self-defense. Having said that, whenever you handle an AR-15, or any gun, the absolute first thing you need to do is clear it. That means you’re going to check and see if it’s loaded, and if it is, you will unload it. 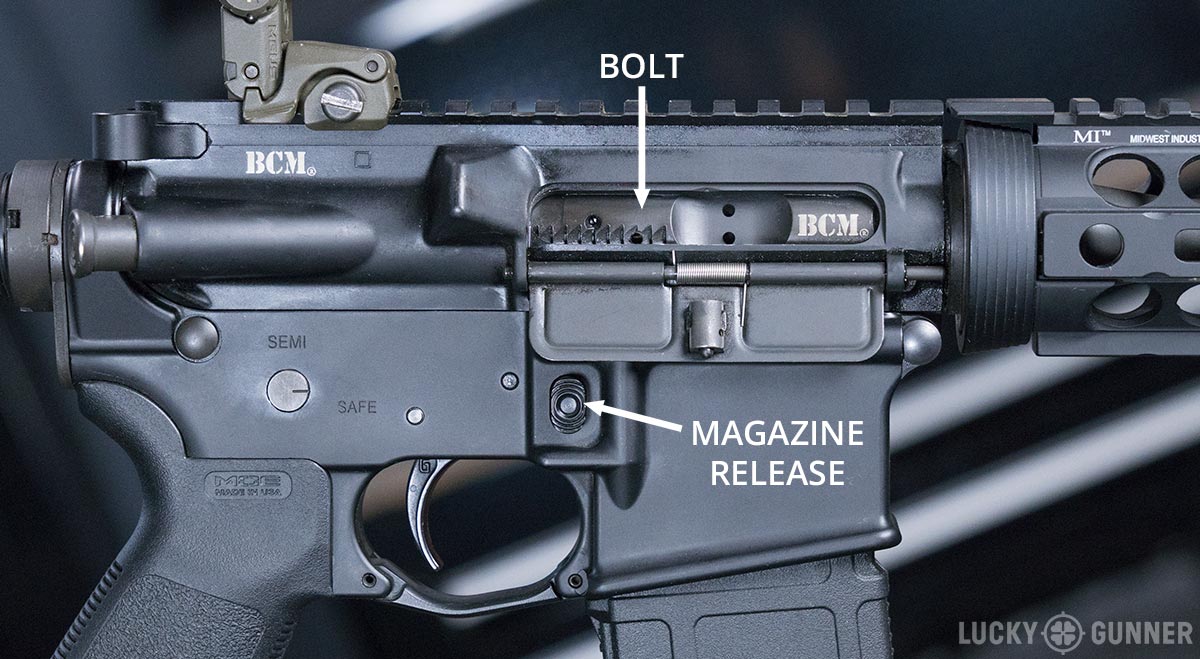 Set the magazine aside, and now you need to open the bolt so you can see if there’s a round in the chamber. The bolt is this thing here that moves back and forth when the gun is fired. If you don’t see it, that might be because the ejection port cover is closed, but that will open automatically when you open the bolt.

To do that, sharply pull the charging handle to the rear as far as it will go. If there’s a round in the chamber, it should come out when you do this. But you still need to get a look in the chamber to make sure there’s nothing in there, so you need to lock the bolt open.

Another way to lock the bolt open is to insert an empty magazine, and when you pull back the charging handle, the empty mag will activate the bolt catch and it will lock open automatically.

With the bolt locked open, get a good look inside the chamber, which is really just the other end of the barrel. We want to see an empty chamber like the photo below on the left, but if there’s a round still in there for some reason, it will look like the photo on the right.

Now that you have cleared the gun, you can do whatever else you need to do with it like clean it, or put it away. In this case, we’re going to load it, so leave the bolt locked open and put the gun down with the barrel pointed in a safe direction. Keep the ejection port facing up (that’s the opening on the side you looked through to inspect the chamber), so everyone around you can see that the rifle is unloaded. 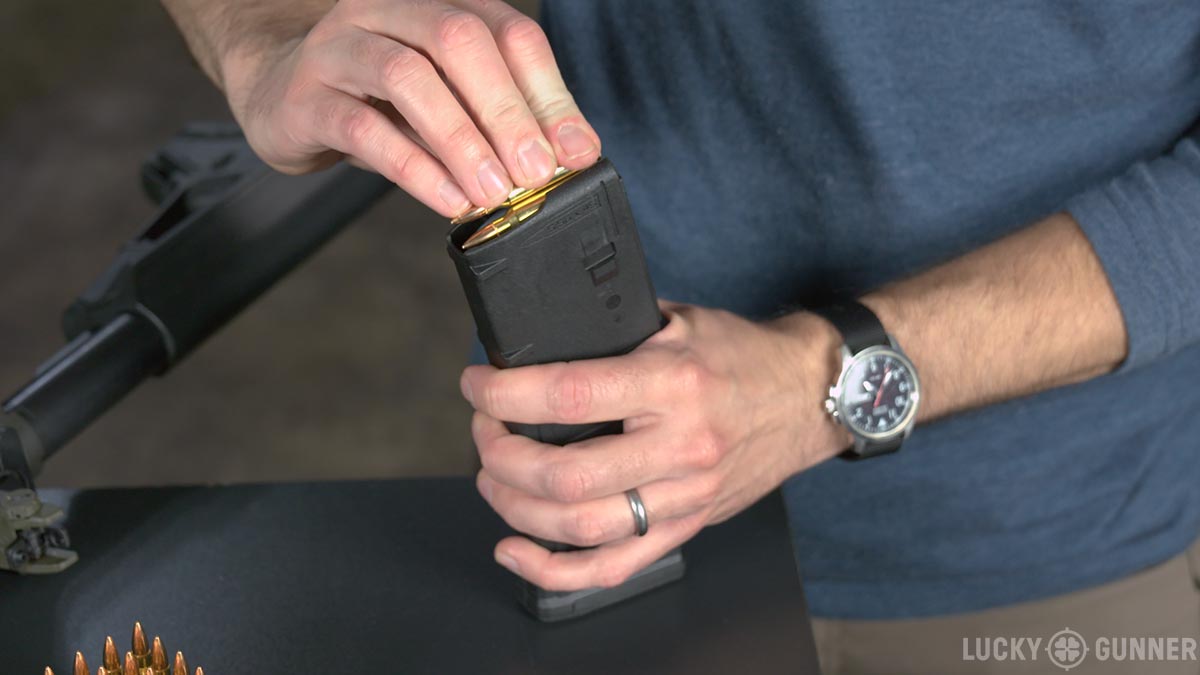 I suggest you not fill the magazines to full capacity. For example, this is a 30-round mag, but I don’t usually load more than 28 rounds. I’ll talk about why in just a minute.

Once you’ve loaded however many rounds you want to shoot, pick up the rifle with your firing hand on the grip. Take a quick look at the safety selector and make sure it’s still on safe. Pick up the magazine and insert it into the mag well until it clicks. Give it a little tug to make sure it’s firmly seated in place. If you skip this step, your mag might fall out while you’re shooting and you’ll feel like an idiot and everyone will laugh at you and that’s no good. Once you’ve ensured the mag is fully seated, press the top portion of the bolt catch to close the bolt and chamber a round. Right-handed shooters can simply reach up and press the bolt catch with the left thumb after inserting the magazine. Left-handed shooters can hit the bolt catch with their trigger finger.

When the bolt closes, it picks up a round from the magazine and loads it into the chamber. The rifle cannot fire unless there is a round in the chamber.

Okay, so my mag is in there, but the gun is not ready to fire yet. There’s no round in the chamber. So just pull the charging handle to the rear and release it. As much as possible, you should try to keep your firing hand on the grip and do these manipulations with your support hand. If you’re running the rifle left handed, rotate it 90 degrees clockwise and reach over with your right hand to run the charging handle.

At this point, the gun is loaded and it will fire if I disengage the safety and press the trigger. But we’re not quite ready for that, so keep the safety on and your finger off the trigger for now.

Let’s talk about firing the rifle. The best stance and grip to use is dependant on the type of shooting you’re doing. I’m going to give you a quick overview of one technique that’s geared toward using the rifle in a defensive context. There’s really not much to a good shooting stance. Just get into an athletic posture with your feet shoulder-width apart, your knees slightly bent and your weight forward.

Put your firing hand as high up on the pistol grip as you can get it. Keep your index finger straight and up here well away from the trigger. If you’re right-handed, put your thumb beneath the safety. Keep your elbow pointed at the ground and not sticking out horizontally. Mount the stock in here, off of your actual shoulder and more on the edge of your pectoral muscle. Most ARs have an adjustable length stock. It’s probably going to work best for you if it’s fully extended or somewhere close to it. If you’re using a magnified scope on your rifle, you might have to bring in the stock a little closer to see through the scope properly. Otherwise, most people seem to have better control of the gun if they extend it on out.

Now, grab the handguard with your support hand. I like to get my arm out pretty far (but not quite to full extension) so I have good control over where I’m pointing the gun. There are different ways to hold it, though. Again, don’t worry too much about that at this point.

With the stock still on your shoulder, pivot the gun down so it’s pointed at the ground just in front of the target. This is the low ready position, and it’s the default position you will use until you’re actually ready to shoot the rifle. When it’s time to shoot, bring the gun up to eye level and get your cheek planted firmly against the stock. As much as possible, move the gun to your face, don’t move your face to the gun. You don’t want to lean your head over to one side.

Now, you need to line up the sights and here is where I have to take a quick detour to talk about sight alignment, and I’ll cover iron sights first. Iron sights aren’t actually made of iron, that’s just the term for any kind of traditional sighting system where you have a front and a rear sight you have to line up. Most ARs with iron sights have the aperture style, also called peep sights. The rear sight has a hole you look through. There might be two different size holes. The big one lets you line up the sights quicker. The little one gives you better precision. A lot of them are flip-up style sights. So make sure your sights are up. I’ve got a fixed front sight on this AR, so I don’t have to worry about that one.

Look through the hole in the rear sight, at the front sight post. You will probably have to close one eye to do this. Line everything up so the top of the front sight post is right in the center of the target. Unless the target is really close, you generally want your vision focused on the front sight. The sight will wobble around a little bit and that’s okay. You won’t be able to hold it perfectly still when you’re shooting from a standing position. 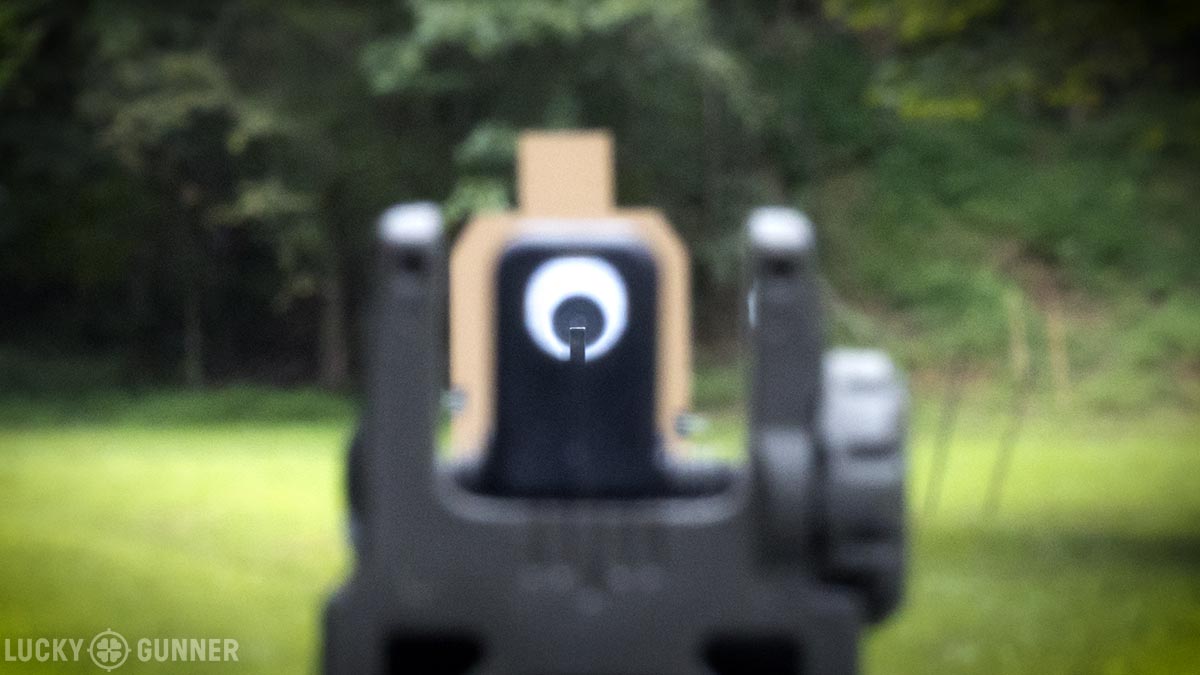 If you have a red dot sight, things are a little easier. Just line up the dot with the center of the target, and that’s all there is to it. 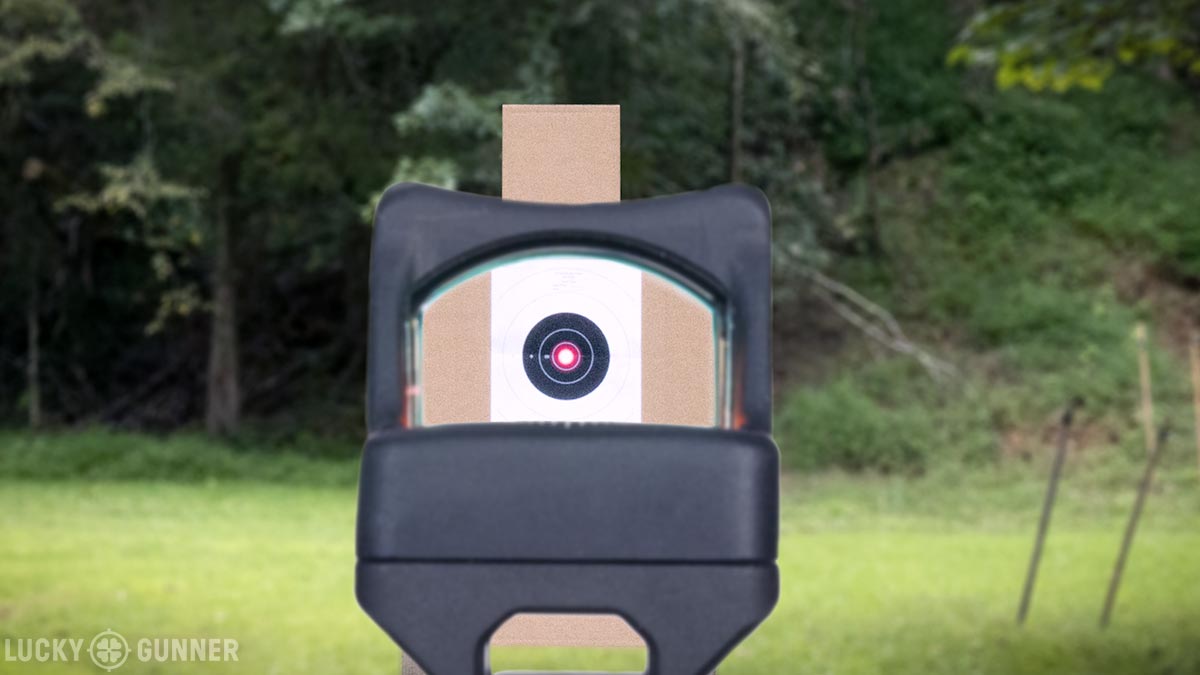 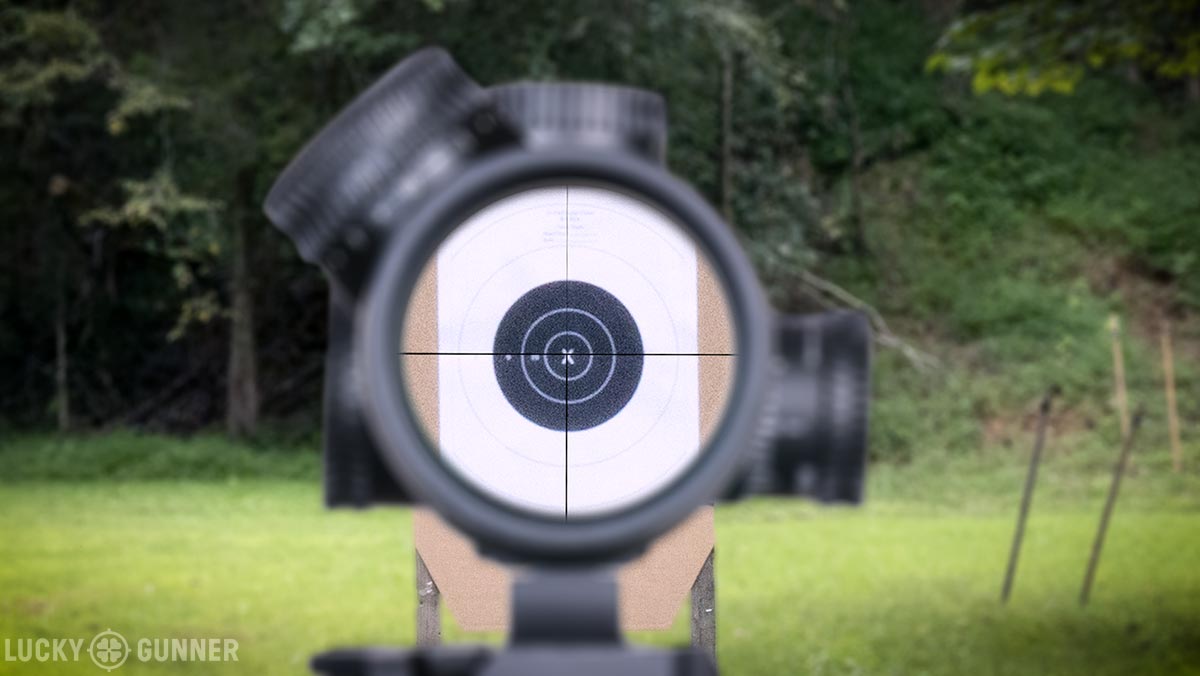 Whether you are using iron sights or a red dot, or a scope, you might have to make some adjustments to that sighting system so that the spot you’re aiming at is the same as the spot the bullets are going. This process is called sighting-in or zeroing the rifle and that’s a topic for another day. Just be aware that if you bought your gun new or you just installed the optic yourself, it will probably need to be sighted-in before you will be able to hit anything.

Okay, so back to shooting the rifle. When the gun is pointed at the target, you can disengage the safety. Use your thumb if you’re right-handed, or if you’re left handed, use the knuckle of your trigger finger. And now finally, you can move your finger to the trigger. Press the trigger to the rear with steady even pressure and… bang. Congratulations, you’ve just put a hole in something.

In the blink of an eye, after the gun fires, the bolt will move to the rear, a spent shell casing will fly out of the ejection port, and a new round will be loaded into the chamber. Press the trigger again to fire another round, and you can keep doing that until you run out of ammo or you decide to stop shooting. In either case, any time you stop shooting, take your finger off the trigger, engage the safety, and go back to low ready.

If the gun is empty, the bolt will lock open on the last shot. Remove the empty magazine and either insert a new mag, or table the rifle with the bolt open and the muzzle pointed in a safe direction.

That was a lot to cover. If you’d like to review it all with a live fire demo, I’ve provided a short excerpt from the video above covering all of the procedures for clearing the rifle, loading it, and firing it.

For more shooting advice, reviews, and how-to guides, be sure to check out our archives, and when you’re ready to take that AR out to the range, get your ammo with lightning fast shipping from us at Lucky Gunner.