The Smith & Wesson M&P 380 Shield EZ is not a pocket pistol and it’s not trying to be one. It’s more in line with the size of the current crop of compact single stack 9mm pistols and even a bit larger than most of those. However, I’m including this review with our Pocket Pistol Series because .380 ACP is generally thought of as a pocket pistol caliber. But that doesn’t have to be the case. While skeptics will likely see this gun and immediately consider the 380 Shield to be “too big for a .380,” for a great number of shooters, it’s just right. And that very well may include a wider variety of shooters than the ones this gun is primarily being marketed to. Details in the video below, or scroll down to read the full transcript.

This is the Smith & Wesson M&P 380 Shield EZ. As the marketing materials declare, it’s a gun that was created to be easy to shoot, easy to rack, with easy to load magazines. Since its release in early 2018, the 380 Shield has been praised as an excellent self-defense and concealed carry pistol for new shooters, small-statured females, and anyone with below average grip strength.

I happen to agree with all of those points, but even if you don’t belong to one of those aforementioned categories of shooters, I think it would be a mistake to dismiss the 380 Shield as a gun that’s just for ladies and old men. But before I get into that, let’s take a closer look at what makes this gun so user-friendly.

The 380 Shield’s EZ to Use Features

First, the slide really is super easy to rack. It takes almost no effort at all. If you’ve never had trouble racking the slide on a pistol, I’m sure you’ve been out shooting before with someone who has. For a lot of people, this one issue can make a trip to the range seriously miserable, but it’s pretty much a non-issue with the 380 Shield.

On the top of the slide, there’s a loaded-chamber indicator to give you a visual and tactile reminder of when the gun is loaded.

The single-stack 8-round magazines have a convenient feature that you typically only find on .22-caliber pistols. There is a thumb stud on either side of the magazine body so you can pull down the follower as you load the magazine. Again, it’s a small thing for most of us who shoot pistols all the time, but for someone with hand strength or dexterity issues, loading mags can be a real headache. This feature is another indication that Smith & Wesson was genuinely paying attention to a severely under-served segment of the handgun market when they designed this gun.

How Does It Stack Up To Other S&W Pistols? 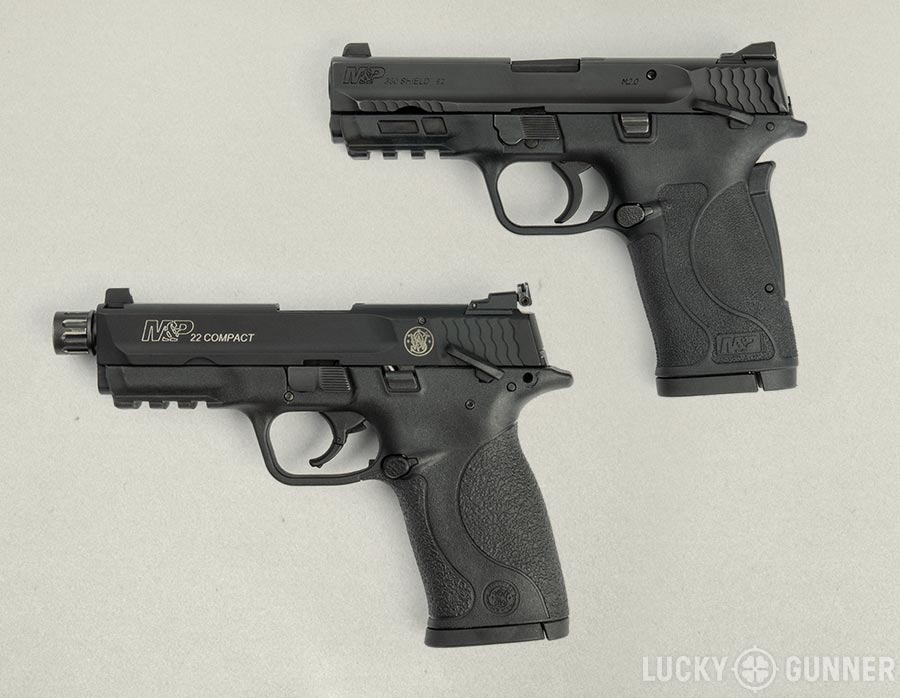 The 380 Shield has a lot in common with the M&P 22 Compact. The internals are different, but they share almost exactly the same outer dimensions and controls. One feature I was glad to see that they carried over from the 22 Compact is the manual thumb safety. This is actually an optional feature on the 380 Shield EZ — you can get it without the manual safety.

About That Manual Safety

Generally speaking, I’m kind of agnostic on manual safeties on handguns. There are plenty of valid arguments for and against. But if you’re going to have a manual safety lever on a pistol, I think it should be designed like this one. It gives you a very positive click when you turn it on or off. It’s ambidextrous — the lever is the same on both sides of the gun. It sits in just the right spot so that as you get a grip on the pistol, the thumb of the firing hand can rest right on top of the safety lever so you can easily deactivate it, and the thumb can just stay there while you’re firing. From what I’ve seen, that seems to work well on this gun whether you’ve got big hands or small hands. As far as manual safeties go, it is pretty ideal.

Even if you get the version of this pistol without the manual safety, it’s still going to have the grip safety. If this lever on the backstrap is not depressed, the gun cannot fire. I know that not everyone was excited to see a grip safety when the 380 Shield was first announced, but it’s a feature that has some merit. In place of a grip safety, most of the other M&P pistols have a two-piece trigger. This is what makes the gun drop safe. Without it, if the gun were to fall and hit the ground on the back of the slide, the inertia could essentially pull the trigger and make the gun fire.

The problem is that if your hands aren’t the right size or shape, your trigger finger may not always be able to reach the part of the trigger that disables that safety. The 380 Shield eliminates that problem by having a single-piece trigger and the grip safety allows it to remain drop safe. 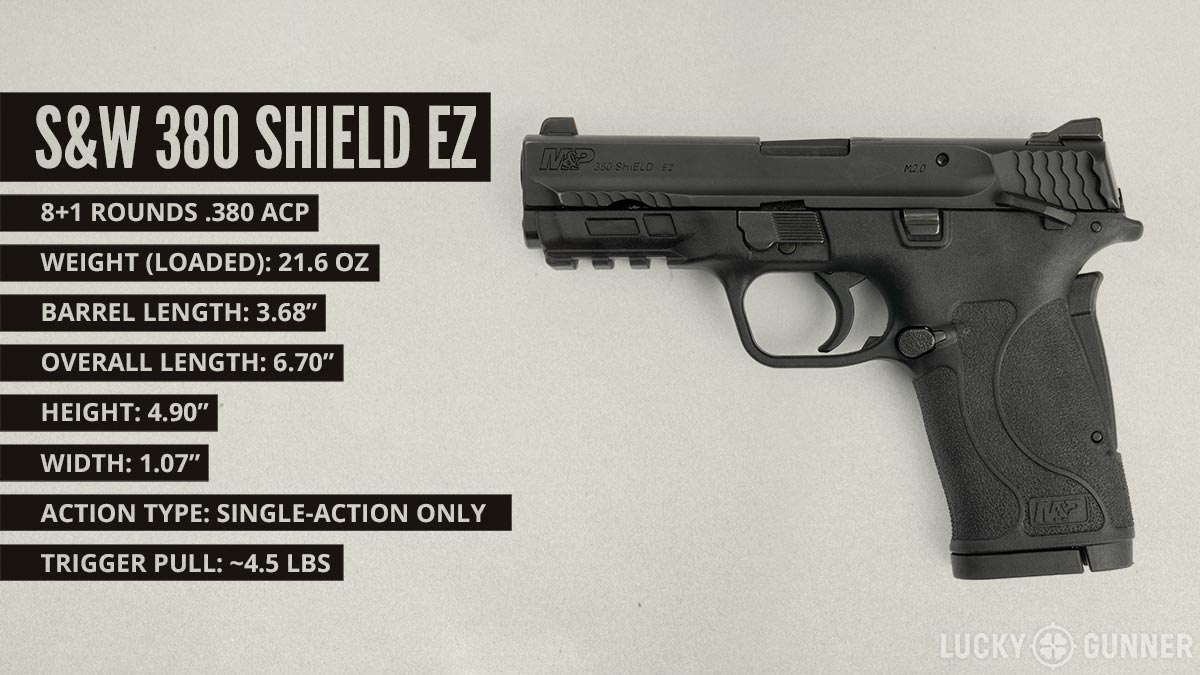 I’m sure someone out there is going to have trouble with this, but if you grip the gun with anything even approaching correct technique, the grip safety should disengage without issue. It really only has to be pressed down about halfway in order for the gun to fire. I tried shooting the 380 Shield with a very loose grip, I tried gripping it really low on the frame and I had a really hard time making it not function unless I put almost no pressure on the backstrap.

The grip safety also offers an extra layer of risk mitigation when you’re holstering the gun. If you thumb the back of the slide the way you would with a hammer-fired pistol, it will force you to release the grip safety. So as the gun goes into the holster, in addition to keeping your finger away from the trigger, you’ve also got the grip safety as another fail-safe to make sure you don’t end up with an extra hole in your leg.

The disassembly of the 380 Shield is another user-friendly feature. You just lock open the slide, remove the magazine, rotate the takedown lever 90 degrees, and then pull the slide off. And now that we’re inside the gun, you can see another carry-over from the .22 Compact: unlike most of the other M&P pistols, the 380 Shield is actually hammer fired, not striker-fired. This is a true single-action only design. There’s the hammer there, it comes forward when you pull the trigger and it hits the firing pin in the slide right there.

The trigger is very light in this gun. In this particular sample it’s four and a half pounds with a relatively short length of travel of about a quarter inch. That, of course, is a two-sided coin. It makes the gun easy to shoot but it also makes the gun easy to shoot when you don’t necessarily intend to. I would rather this gun have a 5 or 6-pound trigger with a longer length of travel more like a double action pistol. That longer travel seems to help mitigate errors in trigger finger discipline at least as much as trigger weight. But doing that would probably also increase the trigger reach, which could be a real problem for a lot of the intended users of this gun.

So I understand why it has a short and light trigger, but I can also see that being a potential problem for a gun that’s being marketed specifically to inexperienced shooters. Say what you will about how hard it is to shoot a J-frame snub nose, but it’s also really hard to have an unintentional discharge with a 12-pound double action trigger unless you really work at it.

In any case, the trigger is not the main reason the 380 Shield is ridiculously easy to shoot. That is more the result of the very low recoil. It has as little felt recoil as any center-fire pistol I can think of short of a three pound all-steel competition gun. Part of that is because of its size.

We think of .380 ACP chambered pistols today as being tiny little pocket pistols and the 380 Shield is much larger than those. It’s the same height as the 9mm Shield with the extended 8-round magazine and the slide and barrel are just under half an inch longer. It is closer in size to some of the older metal-framed .380s like the CZ-83, the Beretta Cheetah, and the Bersa Thunder. It is lighter than any of those, or really most other guns in its size category — it’s just 21.6 ounces loaded, which is the same as a Glock 43.

Those classic metal-framed pistols I mentioned are all soft-shooting guns, but not as much as you might think because they are all straight blowback designs while the 380 Shield is a recoil-operated pistol. If you don’t have any idea what that means, the technical details are not really that important. But generally speaking, if you’ve got two pistols of the same caliber and relatively the same size, the recoil operated gun is going to have noticeably less felt recoil than the blowback gun.

And that brings me back to why I think the 380 Shield should not be relegated only to people who have trouble manipulating other handguns. A low-recoil pistol is something that anyone can benefit from. For the novice, removing the distraction of recoil and makes it easier to focus on learning the fundamentals of marksmanship.

For the intermediate shooter, effective recoil management — where the sights just unconsciously pop back to the same spot following every shot — that is one of the most difficult skills to master. If you don’t get some good training and practice fairly regularly, you probably won’t ever get really good at it, especially with small service-caliber handguns. The 380 Shield makes recoil management almost trivial. So if you can’t get in as much range time as you’d really like, you can spend that time focusing on fine-tuning things like trigger control or your drawstroke. 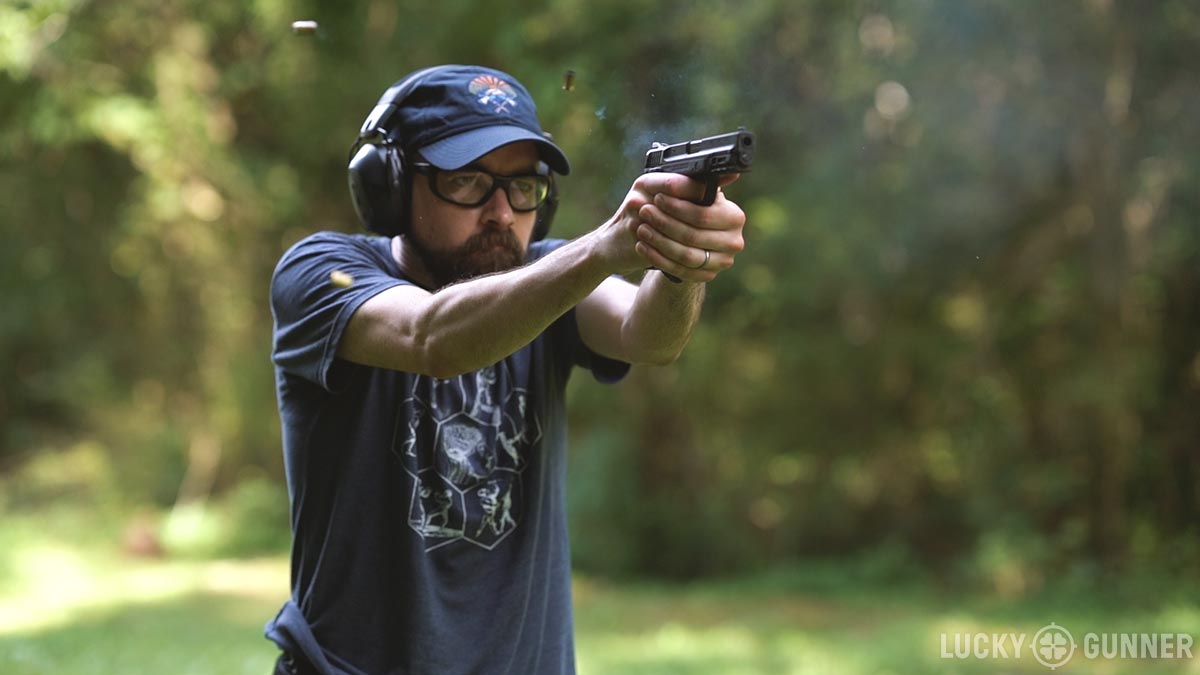 And if you’re already a pretty good shooter, a gun like the 380 Shield will let you shoot even better. I can run this thing with ridiculously fast splits — usually around .17 without much effort. Even if I didn’t plan to carry one, I would probably consider buying a 380 Shield just because it’s so fun to shoot. It also it makes a great loaner pistol when I take other people to the range.

We have actually been planning this review for a long time now — we picked this gun up shortly after they came out last year. Since then, I’ve let a lot of people try it out, including a dozen or so new shooters. Yes, it’s a gun that everyone likes to shoot, but more than that, it’s a huge confidence booster, especially for people who previously thought the only pistol they could manage was a .22.

So I hate to sound like a complete fan boy, but I really can’t think of many bad things to say about the 380 Shield EZ. It’s probably the best idea Smith & Wesson has had in the last decade. MSRP is $399 and right now you can usually pick them up for between $300 and $350.

If you decide to get one, be sure to feed it with quality .380 ACP ammunition. I’ve had good results with 95-grain Speer Lawman TMJ in this gun. Of course, we’ve got that and all the other major brands of .380 that you can order from us with lightning fast shipping from LuckyGunner.com.