Optimizing the Beretta 92 for Self-Defense

For this next installment of our mini-series on the Beretta 92, I wanted to address some of the practical issues related to using this pistol for self-defense. I know several shooters who own a Beretta 92FS, but only because it had some novelty appeal when they were fairly new gun owners. As their involvement in the shooting world grew deeper, they became more interested in the latest polymer pistols or custom 1911s, leaving the Beretta in the back of the safe. But the Beretta 92 still has a lot going for it, especially if you’re willing to look beyond what’s offered with the vanilla box-stock 92FS.

Optimizing the Beretta 92 for Self-Defense

I have a theory about the popularity of the Beretta 92 series of pistols. It’s super-popular with novice handgun owners because of its connection to the military and prominence in Hollywood. But it’s not as popular with shooters who have a little more experience and that’s because it’s an old design, but not as pretty as the 1911. It’s a double action, it’s big and heavy, and just not cool anymore. But if you keep moving along that axis of experience and skill, eventually you will start running into some of the most respected shooters and instructors in the industry and a lot of those guys are big fans of the 92. Guys like Ken Hackathorn, Ernest Langdon, Dave Harrington, Mike Pannone, Bill Wilson, and Massad Ayoob. Now, these guys are not necessarily carrying Beretta 92s all the time, but they are quick to point out the merits of the design and the fact that it’s still a viable platform today.

So let’s look at a few of the things Beretta 92 has going for it and what we can do to get the most out of it as a serious self-defense tool.

One of the things that really sets this gun apart is the fact that it is one of the most reliable semi-automatic handguns on the market. This is something that gets overlooked a lot of times, partly because Beretta hasn’t done quite as good a job at exploiting the gun’s reliability for marketing purposes as some other companies have. But it’s not uncommon at all to run into somebody who’s got a Beretta 92 that’s gone thousands of rounds without a single malfunction of any kind. 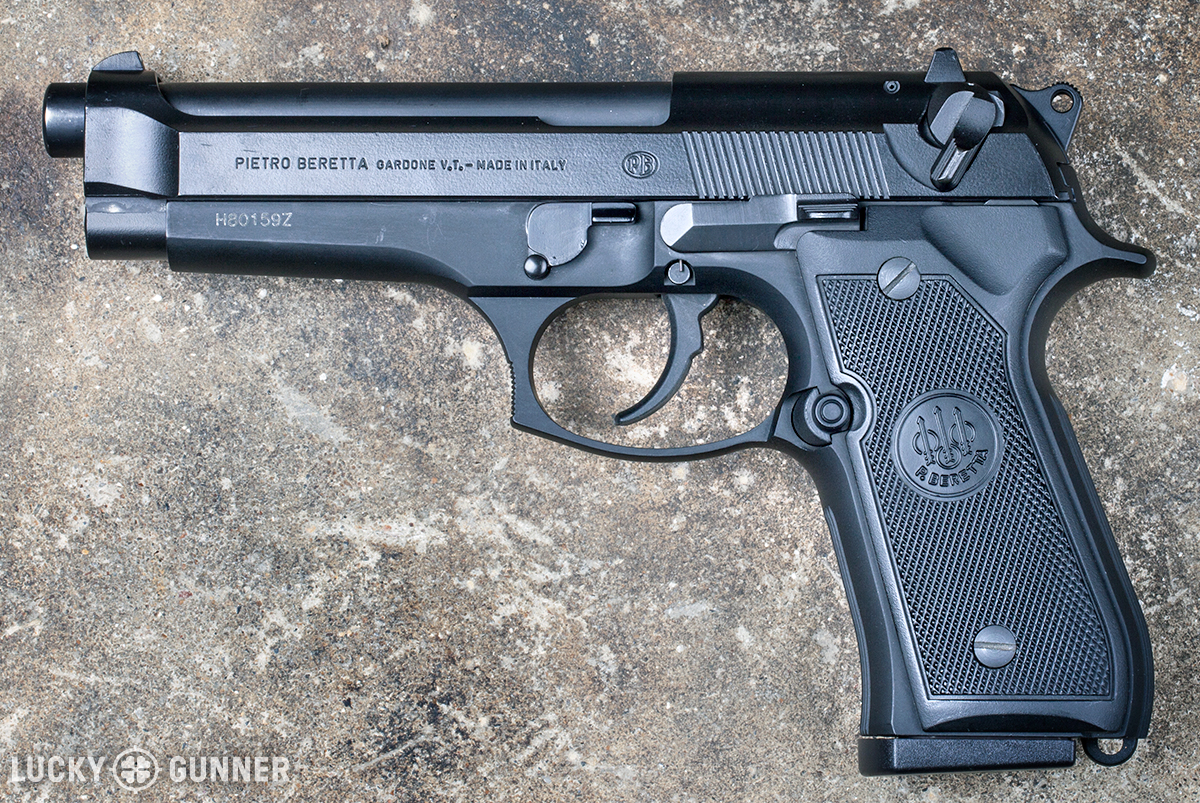 This has a lot to do with the Beretta’s distinctive open-top slide design. The most common type of stoppage with a semi-auto is a failure to eject — the classic stovepipe. But with the Beretta, when that empty case comes out of the chamber, it really doesn’t have anywhere else to go except out of the way so it’s very uncommon for a case to get stuck where it’s not supposed to be.

When you do hear about problems with the 92, it’s usually because of either poor quality magazines or poor maintenance. This is especially the case with a lot of the military’s M9s that have been chronically abused for the last three decades. But if you take care of these things — if you lube them and use good magazines and replace the springs every few thousand rounds, they should run for a very long time.

The Beretta is also incredibly accurate compared to just about any other non-custom fighting pistol. It soaks up recoil and it’s exceptionally soft-shooting, even compared to other full size 9mms. With a $6 Beretta reduced-power hammer spring, the trigger pull can be smooth and easy to manage without compromising safety or primer ignition.

Now, these are all good things, but they’re not all strictly necessary for a self-defense pistol. If we look at what we actually need in a gun like this, it’s a fairly short list. Reliability is the absolute top priority. The Beretta’s got that. We also need an effective caliber with enough ammo capacity to take care of the kind of threats that we might face. Depending on the mags you’re using, you get 15-20 rounds of 9mm with the Beretta, so we can check that box too. And the gun needs to fit the shooter so they can reach all the controls and the trigger and get a solid firing grip in order to adequately manage recoil.

And that last point, the fit, that is where the Beretta 92 falls short for a lot of people. The standard 92FS like this one does not have great ergonomics. In particular, the slide-mounted safety is not very user-friendly. It’s awkward to use, even if you’re lucky enough to have fingers that can reach it without breaking your grip. Some people like the safety on this gun, and that’s fine, but I think for most people, it ends up being a liability because it’s not very intuitive to disengage.

You can carry this gun with the safety in the fire position and it’s still completely safe because of the long double action trigger pull. But if you do this, you still need to practice sweeping off that safety — you have to make that motion with your finger every time you bring the gun up to target, just in case the safety becomes engaged without you realizing it.

Because of how awkward it is to use the safety and the fact that most people just aren’t going to practice with it as much as they should, I think the Beretta 92G is a better option in most cases. With the G models, this lever acts as a decocker only. It cannot be left in the “safe” position, so you remove that liability completely. The G models aren’t always easy to find so if you get impatient, Wilson Combat will convert your FS model to a G for $150.

The other issue some people have with the fit on this gun is the large grip. This can make the trigger reach too long for a lot of people so they either end up with a bad grip like that, or they just can’t properly manipulate the trigger for that first double action shot. You can get a little help here by trying some slimmer grip panels, or by installing the short reach trigger. Those things can both make a huge difference. There’s also a version of the 92 called the Vertec which has a reduced grip with a straight backstrap — it’s not for everybody, but it can help with trigger reach issues in some cases.

If you can get a Beretta 92 set up so that it fits you, it’s really tough to beat for a full-size self-defense pistol, and it doesn’t have to be an expensive custom job, either. I’ve got a nice Beretta like that — I enjoy shooting it, it’s a great gun. But really, if you just gave me a plain 92G, I would stick a reduced-power hammer spring in it, I would put some bright orange paint on the front sight, and really, I would feel pretty well-equipped for anything I might need to do with that pistol. Of course, Beretta has made a ton of variants of the 92 over the years that add some of those nice-to-have features like a light rail, a removable front sight, and more aggressive grip texture. And if you want to actually carry the 92, there are several compact models that I think are severely underrated. Yesterday on the blog we posted a graphic that charts these different 92 models as a reference to help you figure out what features are on each model.

There’s a link to that in the video description, so be sure to check that out if you haven’t already. And then, if you want to support our video channel, buy some ammo from LuckyGunner.com.

Evolution of the Beretta 92

During the course of our series on double action semi-autos, I mentioned a couple of times that I'm a fan...