How to Reload a Defensive Shotgun

Even though our series on defensive shotguns more or less wrapped up earlier this year, we left a lot of ground uncovered. If the comments on our previous articles and videos are any indication, you guys still have a lot of questions about shotgun-related gear, techniques, and strategies for deploying the shotgun as a home defense tool. So, much like our defensive revolver series, we’ll keep bringing you periodic shotgun content in between our coverage of other topics.

Today, we’ve got a video on reloading a shotgun in a home defense context. Low ammo capacity is often cited as one of the weaknesses of the shotgun, so if you’re going to use one, you’d better know how to keep the beast fed. As with most technique-oriented topics, this stuff is much easier to communicate via video than in writing. However, since I know not all of you are the video watching type, I’ve deviated from my normal format of simply pasting the video transcript below, and instead I’ve attempted to paraphrase the content of the video into a more text-friendly form along with some screen captures to help illustrate the techniques. I still think the video is much easier to follow, but I know how it is when you’re sitting in the waiting room at the doctor’s office and you don’t want to frighten the other sick people with shotgun noises coming out of your phone. So just for you, enjoy the pseudo-transcript below.

Even though most defensive shotguns have a relatively low ammo capacity, it’s almost unheard of for an armed citizen to empty a shotgun before stopping a home invasion. That said, it’s always possible that we might need more ammo than what’s already in the shotgun in order to protect our home and our family. When we’re practicing at the range we’re going to need to load and reload the shotgun anyway, so we might as well practice a reloading technique that would be viable under fighting conditions.

There are literally dozens of different techniques for reloading a shotgun, but in a home defense context, we’re probably not going to be able to rely on any kind of belt pouches or a chest rig like we might use in competition. We’re going to be limited to the ammo that’s on the gun, and typically, that means a stock-mounted shell carrier, or a receiver-mounted sidesaddle. The sidesaddles are more popular, and that’s what I use, so today I’m going to demonstrate two different reloading techniques with the sidesaddle. I’ll be using a Remington 870, but these reloads should work with any modern pump action shotgun and they can easily be adapted for most semi-autos as well.

These aren’t necessarily the fastest reloading techniques, but they are pretty reliable and they require as little conscious thought and manual dexterity as possible. Shotgun ammo is big and clumsy to deal with, and there are a lot of ways to mess up these reloads, so I like to use simple techniques whenever possible.

When we’re training with shotguns, we don’t want to wait until the gun is empty to think about managing ammo. When we’re not shooting, we should be proactively reloading. If we fire two rounds at a target, we reload two rounds. If we fire three, we load three. So both of these techniques include topping off the gun and loading an empty gun.

For this first technique, I’m starting with the primers, or brass part of the shells, oriented at the bottom of the sidesaddle. From the firing position, I bring the stock off my shoulder and down next to my hip. You can reload with the gun still mounted to your shoulder, but you’re supporting everything with your wrist and it gets tiring really quickly. You also don’t have a lot of leverage on the gun if someone were to grab the barrel and try to take it from you. With the stock lowered, similar to a “high ready” position, I shorten the profile of the gun and I’ve got more leverage to hang on to it.

To load the mag tube, I use my thumb to push a shell downward out of the loop and into my hand. From there, I bring it up to the loading port with the shell oriented parallel to the receiver. If there’s a shell lifter or shell carrier blocking the opening to the magazine tube, I just use the front of the shell to lift that out of the way and push the shell into the tube. I push with the tip of my thumb on the base of the shell. I want to make sure the shell goes into the tube past the shell stops so the tube spring doesn’t try to spit the round back out, so I want my thumb to go partially into the mag tube.

As long as I am pushing with the tip of my thumb and keeping my thumb straight rather than using the pad of my thumb, the shell lifter should not catch on my thumb when I remove it from the tube. Users of the Mossberg 500 series of shotguns don’t have to worry about this issue because the lifter stays clear of the loading port when the action is closed. 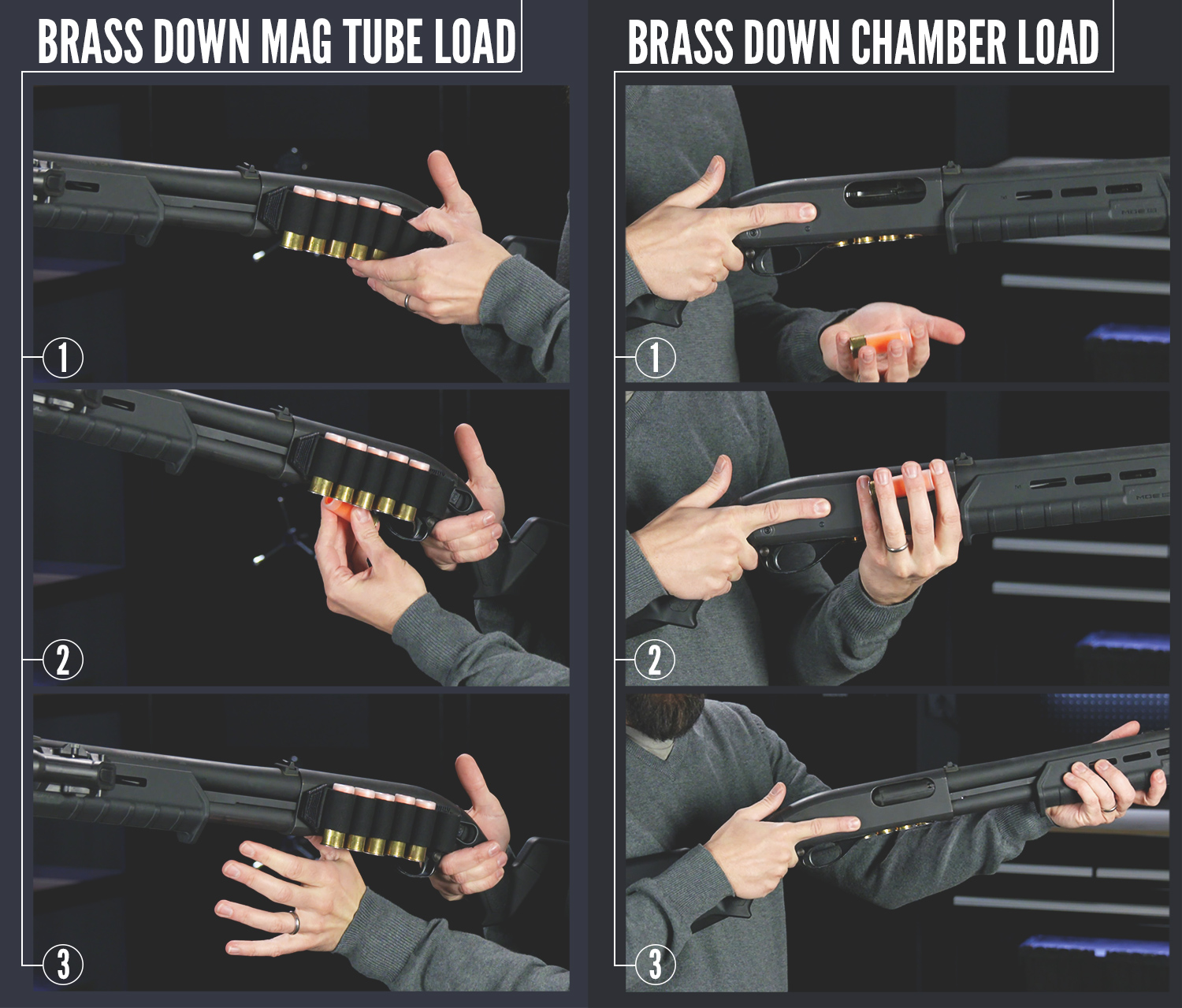 If I’ve fired the gun until it’s empty, I have to load the chamber before I load the mag tube. With a pump action, I might not know I’m empty until I get a “click” instead of a “bang.” So when that happens, I open the action, and then grab a shell from the sidesaddle just like I did before. Rather than inserting the shell into the mag tube, I’ll bring it all the way under the receiver and drop it directly into the ejection port from the right side. I don’t even have to look at the ejection port to do this. I just place the shell against the bottom of the receiver and slide it up until it drops into the ejection port. From there, I can easily close the action and resume a firing position, or begin loading the magazine tube if there’s no immediate threat.

The other reloading technique is one I learned from Darryl Bolke in his HiTS shotgun class in November.

I’m going to start with the shells oriented “brass up” this time. The reason you might want the brass to be up is to prevent the shells from falling out of the loops. With the brass down, when you fire the gun, the vibration can shake the shells loose until they fall out completely. This is especially an issue with the hard plastic sidesaddles. I haven’t had that problem with the elastic loops, but it can happen with those too because eventually the elastic will wear out. Storing the shells brass up keeps them from falling out.

To reload from here, if I do the intuitive thing and pluck the shell out with my thumb and forefinger so that I’m holding the shell like a cigar, it’s not really oriented in my hand in an ideal way to feed the mag tube. So instead, I will blade my hand and point my fingers back toward my face so when my hand is next to the sidesaddle, my thumb is pointing at the ground. Now I can push the shell up through the loop with my thumb and grab it with my fingers. Then I move the shell to the loading point and begin loading the magazine just like I did with the other technique. 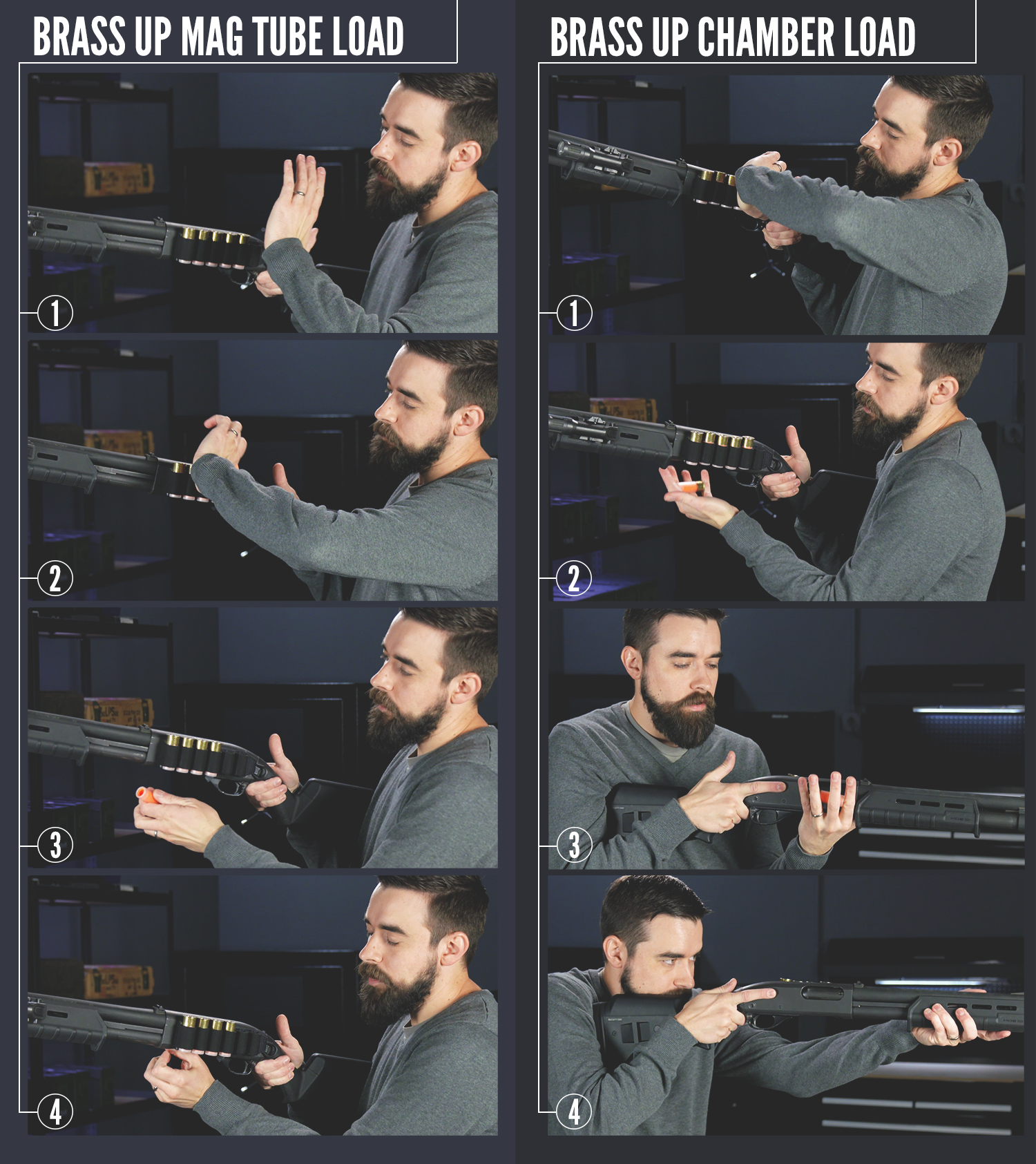 To load the chamber, I repeat the reverse-hand motion I used to remove a shell from the sidesaddle. Rather than loading the magazine tube, I’ll bring the shell under the receiver to load it through the ejection port, again, just like I did with the brass down chamber load.

With the shells in the brass up position it’s actually quicker to load the chamber by bringing the shell over the top of the receiver and into the ejection port. If you rotate the gun to the left, gravity works in your favor and you can almost drop the shell into the gun. However, using this technique requires you to grab the shell in a different way than when you’re loading the tube — the overhand grab doesn’t work here. Like I said before, I prefer to have as little thinking involved as possible, so I like to bring the shell under the receiver every time — even if it costs me a couple of tenths of a second — because I can always grab the shell the same way regardless of where it’s going to go.

Some people like to mix up their shell configuration in the sidesaddle and have the brass down for loading the tube, and flip a couple of shells brass up for quickly loading the chamber. Again, this can be really quick, and I’ve seen some people use this technique very successfully in training classes. But like Darryl pointed out in his class, when his attention is focused on a potential threat, he doesn’t want to have to think about which way the shells are turned, and I’m inclined to agree with him on that.

If I have reached the point where I have to emergency reload my shotgun in my home, something has gone horribly wrong, and I want the most idiot-proof technique possible, and I think these two fit that description pretty well. Having said that, there are a lot of variations on the shotgun reload that can work just as well if you practice enough to make them second nature.

Okay you guys, that’s it for the Lounge for 2016. We’ll be back with more cool stuff in a few weeks. Merry Christmas, Happy New Year, and all that stuff!

A few weeks ago, I described the basics of the OODA Loop -- Observe, Orient, Decide, Act -- and how it...