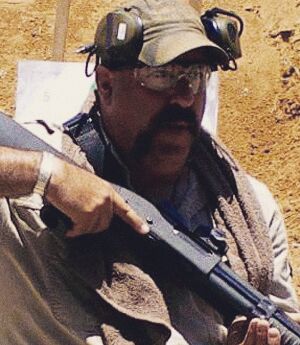 Darryl Bolke retired from a Southern California police department as a Sr. Corporal after 19.5 years as a full time officer due to injuries sustained during a violent on-duty confrontation.   He was a Firearms Instructor and Armorer for the Special Weapons and Tactics Team for 17 years, and the primary instructor for all firearms systems used by his agency. He also provided mandatory firearms training for the fire department Bomb Squad and Arson investigators.  He assisted on the investigation of over 75 officer involved shootings assisting the administrative investigation team with the firearms portion of these investigations. He provided expert testimony in regards to firearms usage and police tactics in numerous court cases.  Bolke also developed and implemented a nationally recognized edged weapons policy and training program for law enforcement.

His past assignments have included 3.5 years in a full time bicycle unit and 4 years as a Tactical Flight Officer in the Air Support Unit, as well as 10 years as a Field Training Officer and a year assignment primarily working vice.  A majority of his career was working at night in a patrol environment.  He also spent several years as a licensed Private Investigator specializing in high level corporate cases and worked high level executive/VIP protection and high threat protection details in the private sector.  He has been on staff with several organizations providing firearms and edged weapons instruction.

Darryl Bolke is also the Unconventional Weapons editor for Surefire’s Combat Tactics magazine and has had numerous published magazine articles in both the U.S. and Japan on firearms, edged weapons, and related equipment.  He has also authored numerous California P.O.S.T. certified classes.

The legendary 1911 pistol is one of those things that creates urban myth, conjecture, and misconceptions among the firearms community. … Continued

In the last installment of my shotgun commentary discussing myths of the 12 gauge shotgun, number one on the list of … Continued

Editor’s Note: We may have taken a break from our series on defensive shotguns, but it’s far from being over. … Continued