Pulled from deep in the Lucky Gunner archives, we’ve found this 40-year-old episode of a series of TV shorts we once sponsored called Shooting Outdoors. We thought you guys might get a kick out of seeing this old review of the Walther PP.

Okay, so let’s get something out of the way: the pistol reviewed here is actually a Walther PP and not a Walther PPK. It’s an easy mistake to make since the two are very close in appearance. Close enough that in the first James Bond film, Dr. No, Bond is issued a Walther PP, but it’s referred to as a PPK. Apparently the makers of Shooting Outdoors made the same mistake, despite there being a “PP” very clearly stamped on the Walther’s slide. You might also be wondering how a five year old company sponsored a show from 40 years ago, but it’s rude to ask so many questions.

Walther PP vs. PPK vs. PPK/S

There are several variants of the Walther PP pistols, and keeping up with them can get confusing real fast. There are plenty of Walther enthusiasts who can decode the details for you, but the basic story is that the PP has a longer slide and barrel, and a metal backstrap. The PPK is shorter than the PP by 0.6″ and has no metal backstrap, so the grips wrap around the rear. The PPK also has a shorter grip, and the magazines hold one less round. The PPK/S is a combination of the two. It has the shorter barrel and slide of the PPK, but the longer grip of the PP. The original chambering was .32 ACP (or 7.62mm in Europe) but all three variants have also been offered in .380 ACP, .25 ACP and .22 LR.

Aside from the silliness in the above video, I do have a few actual comments based on my experience with the Walther PP. 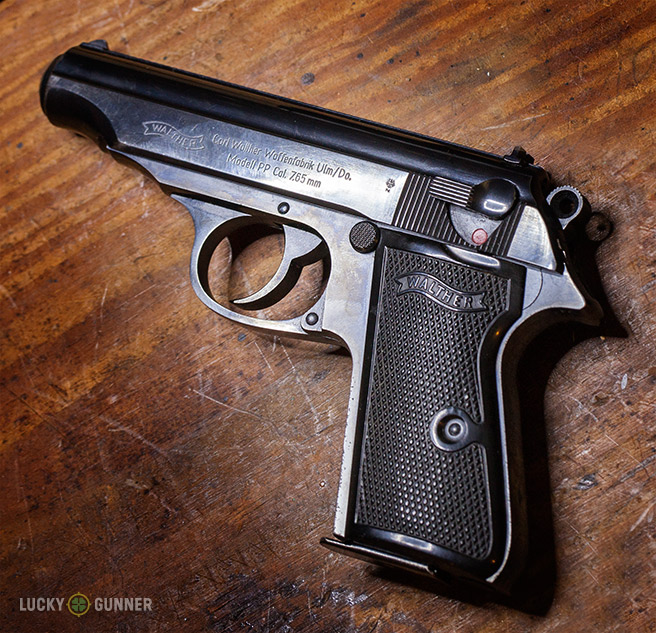 The one I borrowed for the review is chambered in .32 ACP and was made in 1964. Like all of the Walther pistols in this series, it’s a double action/single action with a slide mounted de-cocker/safety. The double action pull is excessively stiff. My trigger pull gauge maxes out at 12 lbs, and at that point, the Walther’s trigger hadn’t even started to move yet. That said, the double action stroke is relatively smooth and consistent, and I actually found it easier to shoot than some of the lighter DA triggers I’ve used in the past. That probably has a lot to do with the relatively short trigger reach, which allows you to get a good amount of leverage on that heavy trigger.

The single action pull came in at around 5lbs, with a little bit of takeup and a clean break. The tiny sights are a joke, but that was pretty much standard practice for semi-autos of the era. If this gun was my only option for self-defense, I’d put a little neon orange paint on the front sight to give me some hope of finding a sight picture under stress.

Usually, I really hate slide-mounted safeties. Actually, I think any kind of safety lever on a double action pistol is an obnoxious redundancy, but slide mounted safeties are the worst. However, the PP is small enough that the safety/decocker was easy to reach with my firing hand thumb, so I didn’t mind it that much. It would still bother me to have to carry a gun with this “feature”, but the convenient placement of the lever does mitigate that problem in my opinion.

I’ve read a lot of complaints about the recoil of the PP and PPK pistols chambered in .380 ACP. The PP was originally designed for the .32 ACP cartridge and apparently the transition to .380 took away a lot of the gun’s user-friendliness. My loaner pistol in .32 ACP hardly recoiled more than a .22 LR and was really fun to shoot. If .32 ACP ammo was easier on the wallet, I would love to own one of these for a plinker.

Another complaint of the .380 version is the issue of slide bite. If you have medium-sized or larger hands and you place your firing hand high up on the grip the way you’re “supposed” to, the meat behind your thumb will come precariously close to the slide when it comes back. I wasn’t “bit” by the slide on the PP, but I can see how it could happen with the .380 as it is probably apt to shift around more in the hand under recoil. Some later versions of the PPK have an extended beaver tail to prevent this.

I won’t go into detail about reliability since I only fired a couple of boxes of ammo through the Walther, but for what it’s worth, I didn’t have any feeding issues or malfunctions with the gun, and its owner says he’s had very few problems in the past. I have heard a lot of complaints about the reliability of the Walthers, but it’s possible malfunctions are more common with the .380 version, or possibly ammo related. The ammo I used was PMC .32 ACP FMJ and JHP. The only issue I did have was that the slide didn’t always go completely into battery when racking in the first round. I eventually figured out how to adjust my loading technique to avoid the problem, so it may have been simple user error.

As a defensive concealed carry piece, the PP type pistols are outdated, and there are numerous contemporary designs that are superior in almost every way (Except maybe appearance. They may be the best looking semi-autos ever). Unless you already happen to own one, there’s not even a case to be made for the PP or PPK as a serious self-defense gun from a perspective of price since used ones tend to be relatively pricey. But they do have a certain charm and they’re fun to shoot. Based on my experience with this PP, I’ll soon be checking out reviews of the current production .22 LR Walther PPK.