You’ve been asking for it for years, so we finally reviewed the classic Makarov pistol. Is it just a Russian copy of the Walther PP, or did it play a more unique role in firearms history? We’re also taking a look at the ballistics of the 9×18 Makarov cartridge and how the Makarov stacks up as a carry gun option today.

Get all the details in the video below, or scroll down to read the full transcript.

If I asked you to name a military firearm that came out of Soviet Russia shortly after the Second World War, that was designed to be simple to manufacture and has developed a reputation for being rugged and reliable despite having really bad iron sights, the first gun to come to mind would probably be an AK. But all of those same attributes also apply to the Pistolet Makarova or, as we call it here in the US, the Makarov PM, or usually just “The Makarov.”

Hey everybody, I’m Chris Baker from LuckyGunner.com. When I did a review of the Walther PPK a few months ago, it was intended to be a standalone video. But, based on numerous viewer requests, I followed that up with a review of the Bersa Thunder and then the Beretta Cheetah, and now it looks like we’re four videos into a series on classic small caliber DA/SA blowback pistols. And you really can’t talk about that category of pistols without giving some attention to the Makarov.

History of the Makarov Pistol

The Soviet Union launched full-scale production of the Makarov around 1953 to replace all their existing military sidearms. They also developed a new cartridge to go with it: the 9x18mm, also known as 9mm Makarov. The Makarov served through the Cold War and after. Russia officially replaced it in the early 2000s with a 9x19mm pistol, but use of the Makarov continues in their military and police today. 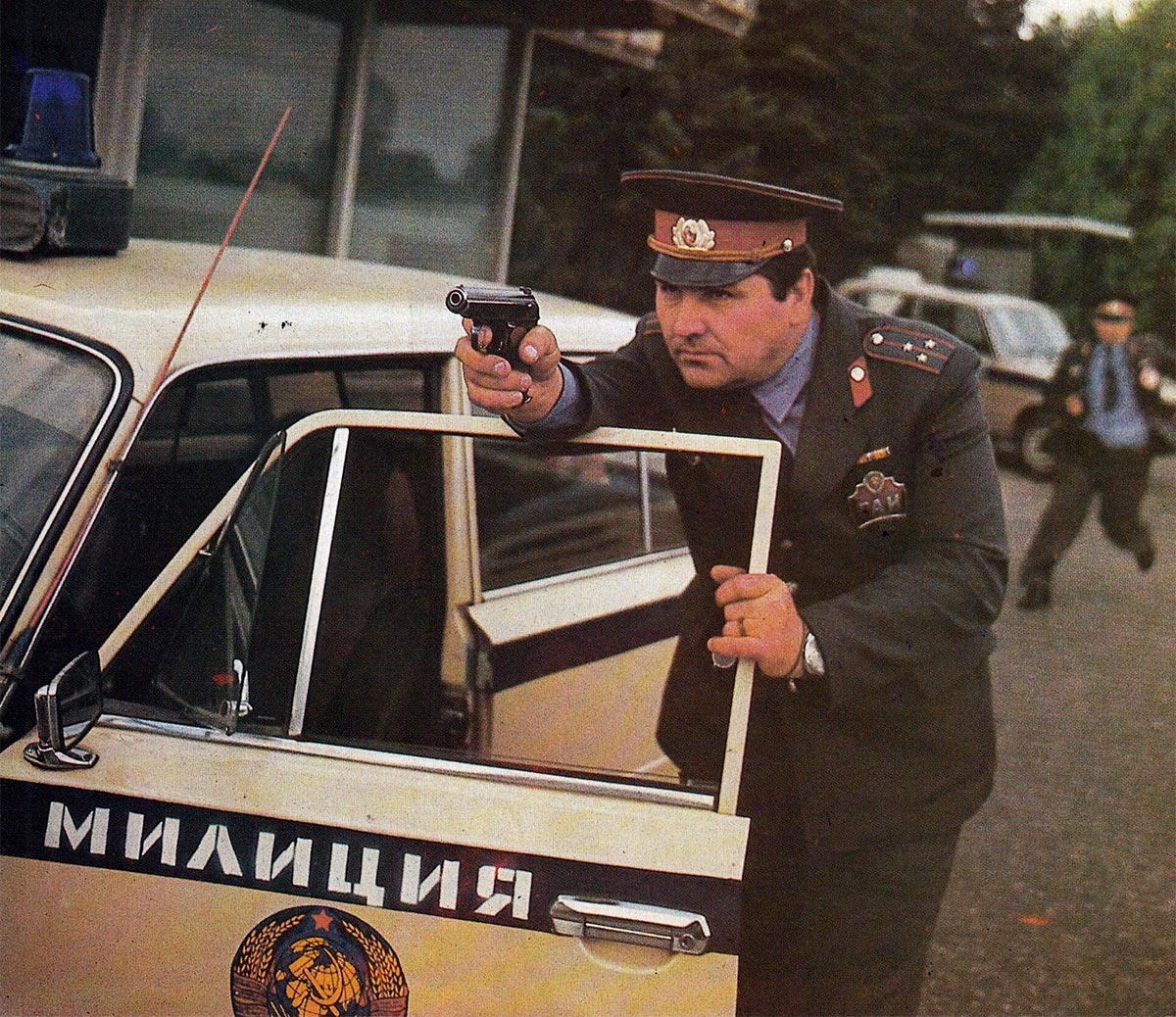 Several other Warsaw Pact countries also adopted the Makarov. But a few of them designed their own pistols chambered for 9×18 like the Polish P-64 and the Czechoslovakian CZ 82. Occasionally, those pistols are mistakenly referred to as Makarovs. In reality, that name only applies to the original Makarov pistol design.

But that’s not to say all Makarovs were made in Russia. Bulgaria, East Germany, and China also produced the Makarov for their own military and police, as well as commercial copies for export. Since the fall of the Iron Curtain, plenty of Makarovs from all four countries have been imported for sale on the US civilian market. For the most part, there are only minor differences in the pistols based on country of origin. The East German Makarovs are generally considered the best in terms of fit and finish. This is a Bulgarian Makarov, which is probably the most common here in the States. 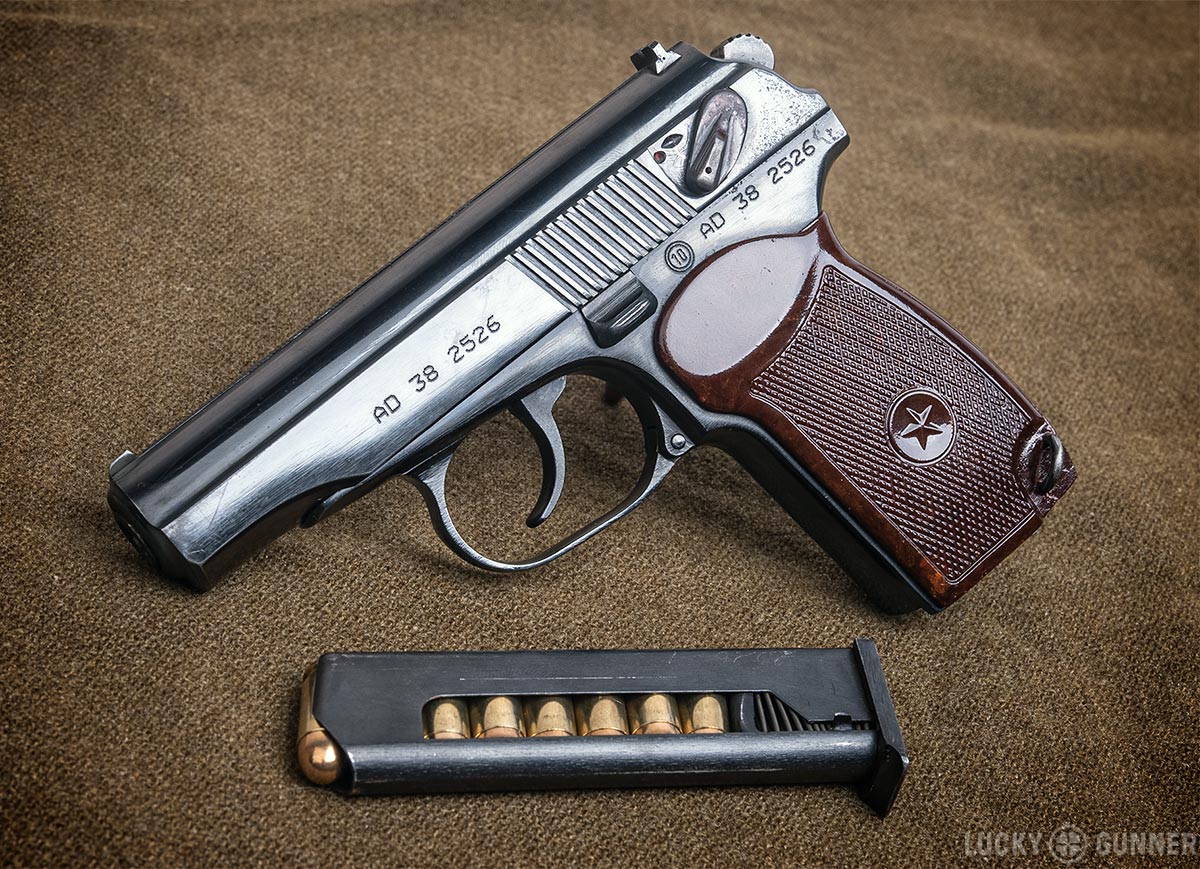 Some commercial Makarovs are chambered for .380 ACP, and there are even some double-stack variants that take 12-round magazines. But the standard, original, military Makarov has an 8-round single stack mag. The construction is all steel with a blued finish, except for the grips. Those are steel-reinforced bakelite. Of course, there are dozens of other grip panels available for the Makarov, but the most common are these checkered one-piece reddish-brown grips with a star on either side and a built-in lanyard loop.

The Makarov design borrows heavily from the Walther PP series, but with some major differences. It’s a much simpler design. There are only 27 parts total in this gun versus 42 for the Walther. The Makarov is generally more reliable and more robust. I think the ergonomics are also much better, but that’s kind of subjective. 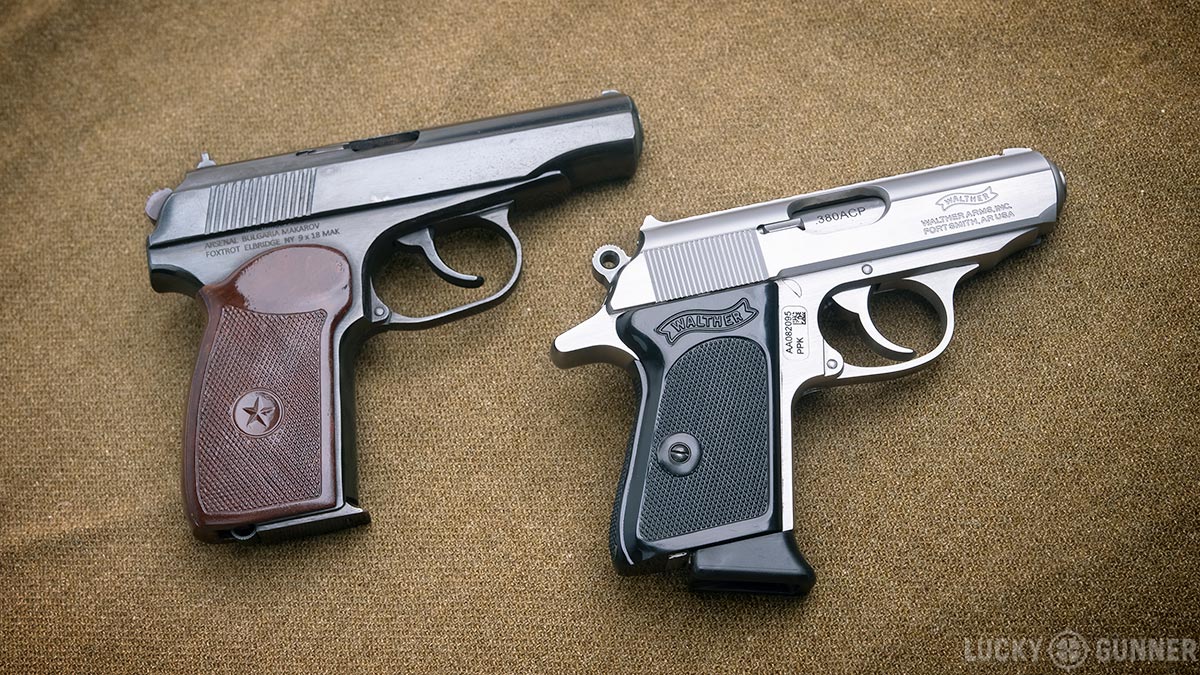 Pushing down for fire is more typical with a frame-mounted safety like the 1911. I think this way is a bit more intuitive. But I’m so used to slide-mounted safeties being the other way that this one tends to throw me off. But if I were to actually carry this gun, I’d probably leave the safety off anyway. When the gun is on safe, you really can’t do anything else with it. The trigger, hammer, and slide will not move at all.

One more departure from the Walther PP is the heel mounted mag release. We can’t have you comrades losing mags on the ground like some capitalist savage. The heel release is there to remind you to carefully remove that mag and save it for the next time you need to re-educate some ornery dissidents.

Let’s take a closer look at the 9×18 Makarov cartridge. I have run across several videos and articles saying that, in terms of power and effectiveness, 9mm Makarov is in between .380 ACP and 9x19mm Luger. That’s technically true, but a bit misleading. It’s not halfway between those two. The ballistic performance of 9×18 is much closer to .380 than it is to 9×19.

95-grain bullets are the most common for factory Makarov ammo. Based on our chronograph measurements, those will give you a velocity around 950 to 1100 feet per second. Factory .380 ACP comes in a wider variety of bullet weights, but we’ll stick with 95 grain bullets to make it an easy comparison. Out of a Glock 42, we get a velocity range between 850 and 950 feet per second with 95-grain loads. So that’s a 10-15% increase in velocity for 9×18 versus .380 ACP. 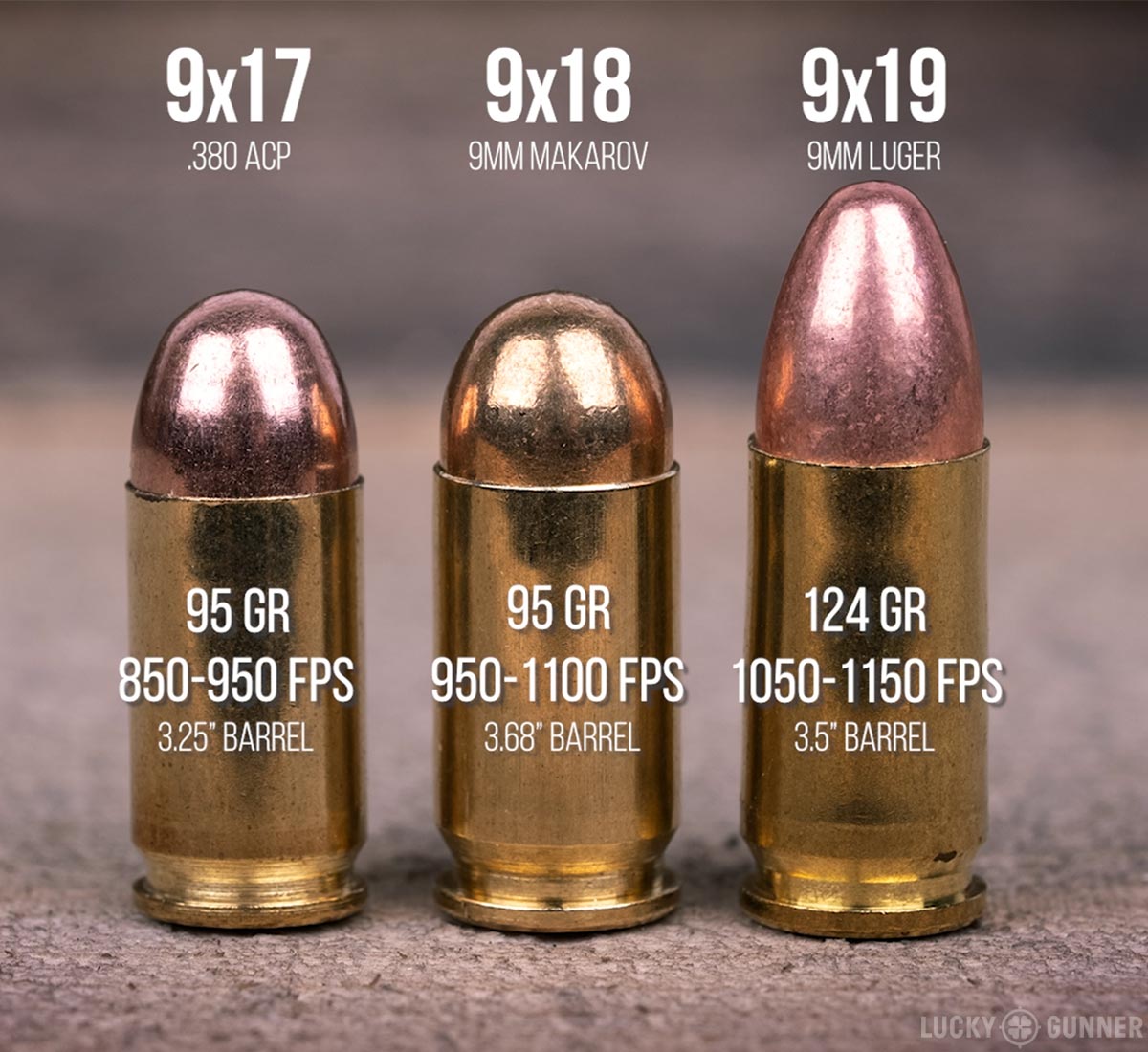 We don’t really have many 95-grain loads for 9×19, so we’ll use the most common bullet weight for self-defense ammo for that cartridge, which is 124-grain. Out of a compact pistol with a 3.5-inch barrel, we typically get velocities in the range of 1050 to 1150 feet per second. And that’s for standard pressure loads, not +P. So that’s a roughly 10% increase in velocity over 9×18 with a 30% increase in bullet weight. 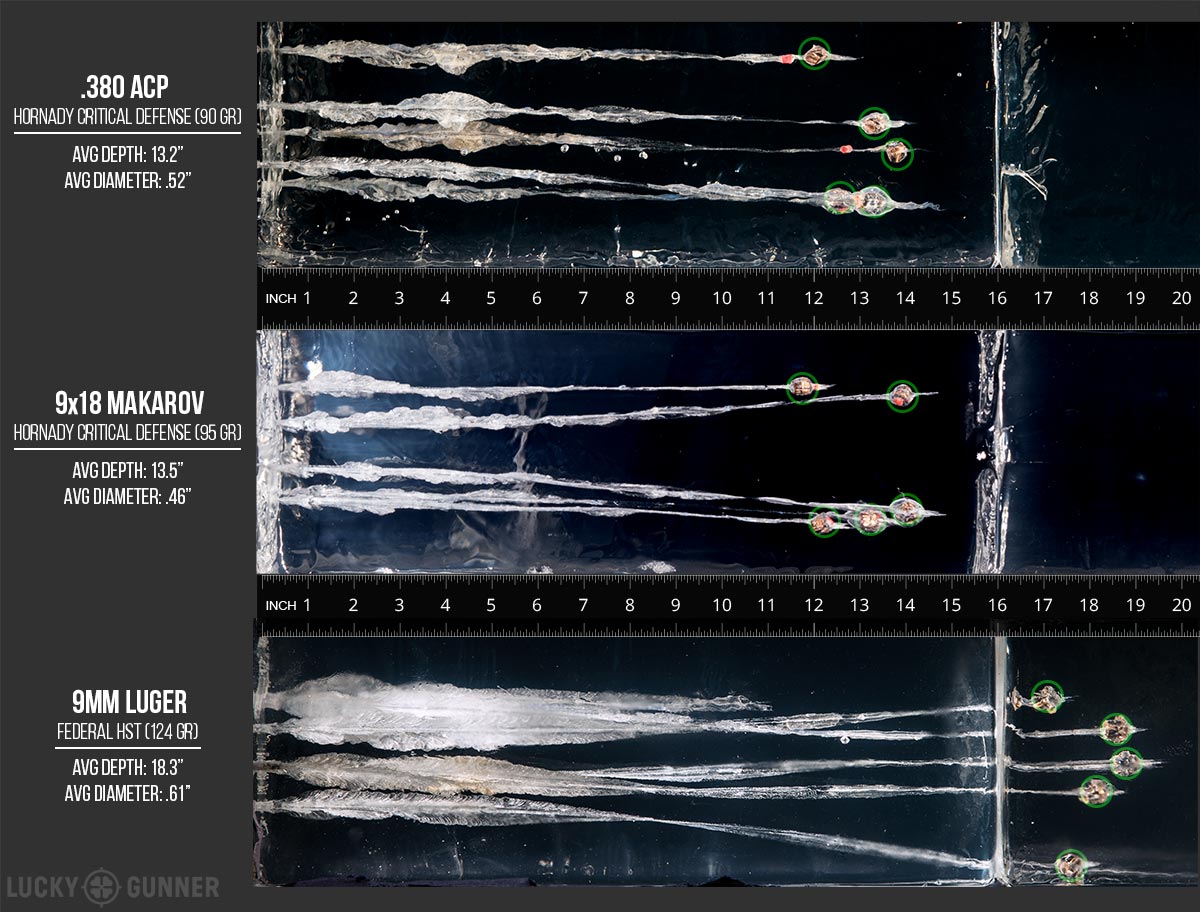 That’s not to say 9×18 Makarov is a bad cartridge. But we should probably think of it more like a .380 +P rather than an intermediate step between .380 and 9×19. With full metal jacket loads, 9×18 might have slightly better barrier penetration than .380, but practically, there is very little difference between the two rounds.

Is the Makarov a Good Choice for Concealed Carry?

I know some of you are huge fans of the Makarov. You even carry one for personal protection on a regular basis. You guys keep doing your thing. But I’m about to say some stuff that might hurt your feelings, assuming the ballistic discussion didn’t do that already. So take a break for about two minutes and then it’ll be safe to come back.

Okay, so for those of you remaining, you might be thinking the Makarov seems like a pretty cool piece of firearms history and that it would be fun to own one. And you’d be right. But if you’re thinking it might be a good idea to buy a Makarov primarily to serve as a self-defense pistol, I would encourage you to reconsider. I shouldn’t even have to say this, but I have run into a surprising number of people who insist the Makarov is an ideal carry pistol, even in the year 2021. 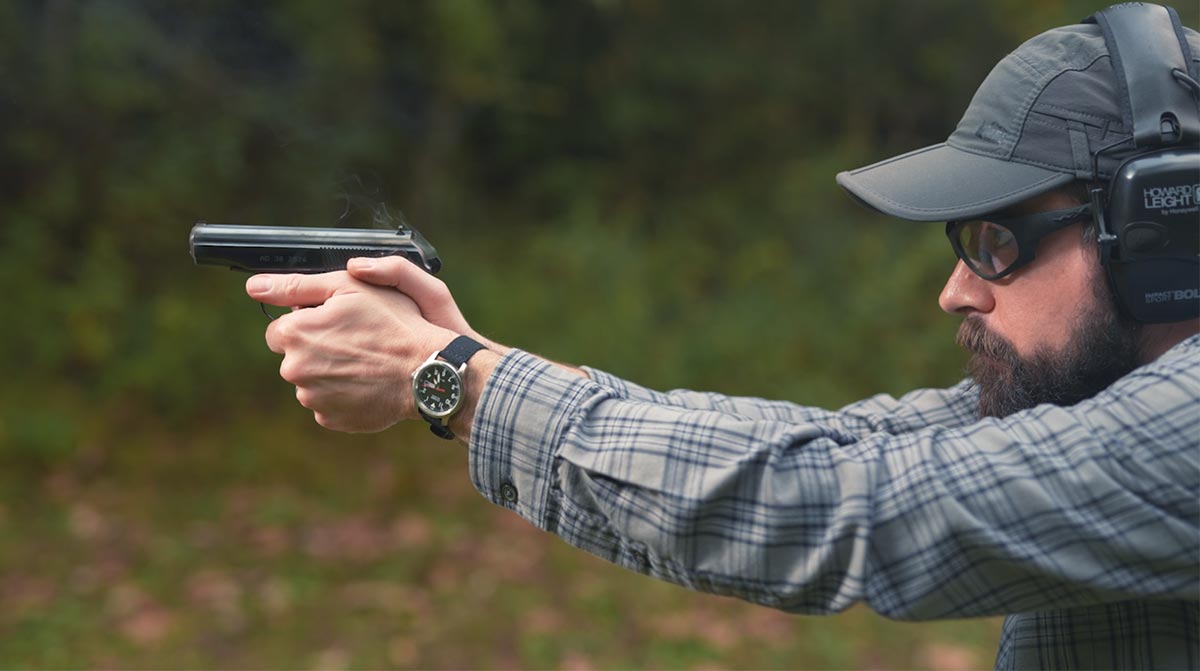 If you saw my video on the Walther PPK, you know I am not a fan of that gun at all. I do think the Makarov is a major improvement in a lot of ways. But it also suffers from some of the same drawbacks. It’s heavy. It has a lot of recoil for a small cartridge. And the biggest shortcoming is the sights. That’s the one thing that’s actually worse than the PPK. They’re very tiny, and obviously not designed with emergency use in mind, which is pretty typical of that era. Some of the commercial variants have fully adjustable target sights. But really, they’re not so great either, compared to a decent set of modern high-visibility sights.

By the standards of the mid 20th Century, the Makarov was an excellent pistol. Even by today’s standards, it’s not a bad gun. They really are generally extremely reliable and I put a high priority on that for a self-defense gun. It’s just that, for the cost, you can do a whole lot better.

Carrying a Makarov made more sense 20 years ago when you could get the gun and case of surplus ammo for under 200 bucks. Even if you adjusted the price for inflation, that would still be an amazing deal. In the early 2000s, it was an even better deal because back then, we didn’t have nearly as many options for slim concealable pistols as we do now. 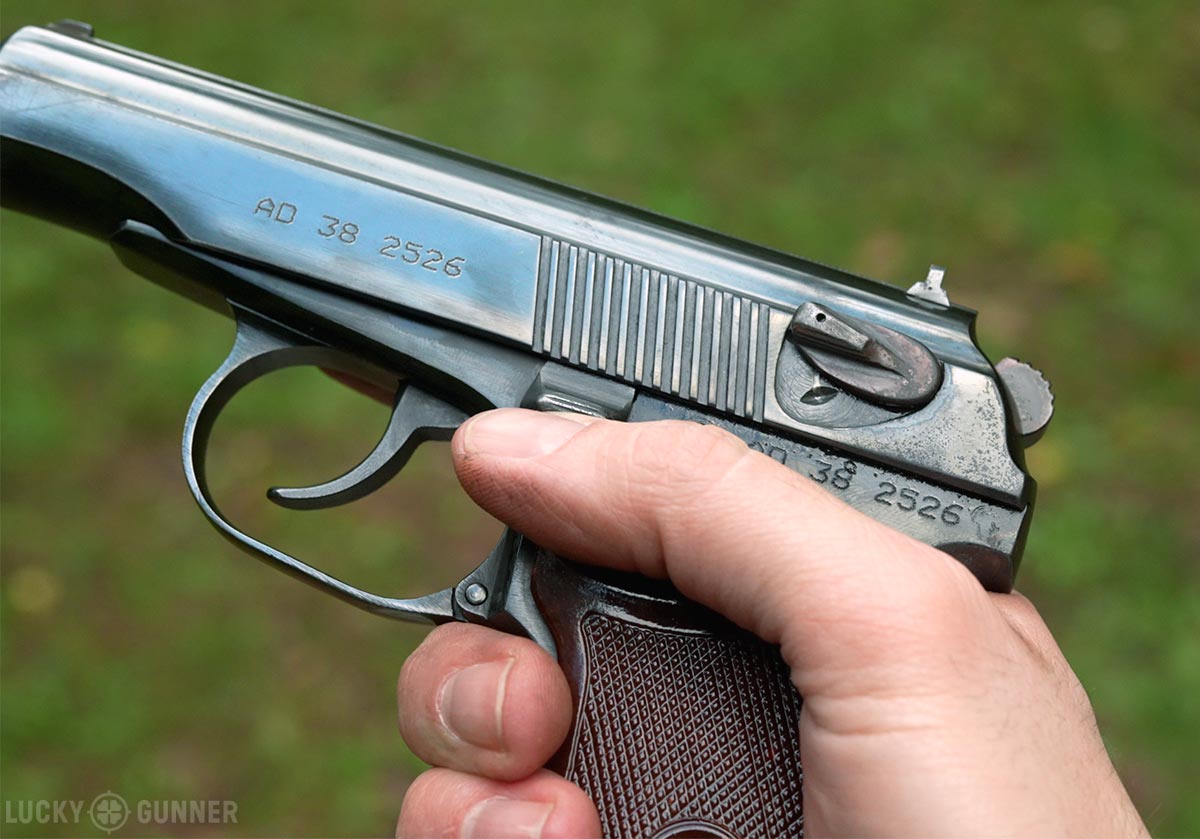 But today, Makarovs start at about $500. The surplus ammo is long gone and factory new 9×18 ammo is not any cheaper than 9×19. In the $500 range, there are at least a dozen reliable new pistols chambered for 9mm or .380 that are around the same size as the Makarov, but much easier to shoot, and also lighter and easier to carry. You could do a lot worse than the Makarov. But if you can afford one, you can also afford a much better option.

Okay, Makarov fans, it’s safe for you to come back now…

That’s all I’ve got for today. I hope you guys learned something. If you want to support our channel, be sure to subscribe to the Lounge newsletter, and buy some ammo with lightning fast shipping from us at LuckyGunner.com.