Earlier this week, we posted the results of our ballistic gelatin testing for 38 different self-defense loads in .38 Special and .357 Magnum. Each load was tested with both a 2 and 4-inch barrel fired into Clear Ballistics brand gelatin blocks with a 4-layer heavy fabric barrier to simulate clothing. You can see the full results in our fancy high-tech interactive charts at Lucky Gunner Labs. If you haven’t already, I highly recommend taking a look at those results before moving on to the rest of this article. This is just the post-game commentary, and it might not make much sense unless you’ve seen the main event.

For the loads I mention below, I have provided links to their individual product pages where you can see the test results for that particular load. To compare those results to all the other loads tested, you’ll want to check out that Labs post.

If I had to summarize all the results in one sentence, I’d say we saw a handful of .357 loads that performed about the same as a good 9mm along with a few .38s that were almost as good, minus a couple of inches of penetration. A slightly less succinct version of my commentary can be found in the video below, or keep reading for the unabridged edition.

In case you missed our previous ballistic gel tests, basically, we are looking for bullets that consistently penetrate between 12 and 18 inches, based on the guideline established by FBI research. Most good hollow points will also expand in the gelatin to at least 150% of their original diameter — about .54” for both .38 Special and .357 Magnum. Of course, no matter what ammo we’re looking at, good shot placement is key and there is no magic bullet that will make up for deficiencies in skill and mental preparation for dealing with violence. So with that in mind, let’s take a look at some of the highlights from our test results.

.38 Special is often considered a bit underpowered, so it’s no surprise that most of the loads that we tested were unable to meet those guidelines for penetration and expansion. We fired five rounds of every load through each of the two test guns. If you throw out all the loads that had any failures to sufficiently expand or penetrate, you’re left with just two .38 Special loads that met the standards with both of the test guns: the Winchester 130 gr +P Ranger Bonded and the Remington 125 gr +P Golden Saber.

Unfortunately, the Winchester Ranger load is typically marketed and sold only to law enforcement and it can be difficult to come by on the commercial market (we have rarely been able to stock it). But keep in mind, those penetration and expansion standards are pretty loose guidelines, so some of the loads that came close are probably still good choices. It just so happens the Winchester 130 gr +P PDX1 Defender and the standard pressure Winchester 130 gr Train and Defend both use the same bonded hollow point bullet as the Ranger, only with slightly less velocity. Those loads didn’t do quite as well as the Ranger through the 2-inch barrel, but I think they are both still worth considering.

I personally had high expectations for the Speer 135 gr +P Gold Dot Short Barrel load, but was sorely disappointed by the test results. With the 2-inch barrel, the Gold Dots barely expanded at all, and even the extra velocity of the 4-inch barrel was not enough to prevent expansion failures. Fortunately, as we’ll see below, the same bullet did much better when pushed to magnum velocities.

We tested three different versions of the so-called “FBI load” — the 158 grain +P Lead Semi-Wadcutter Hollow Point (LSWCHP) that used to be a favorite of law enforcement back in the revolver days. Winchester, Federal, and Remington still each produce their own FBI load with slight differences in velocity and the hardness of the lead. In our tests, the Remington version fired through a 4-inch barrel had pretty good results, but only one of the five rounds expanded when fired through the 2-inch barrel. The Winchester FBI load had very similar performance, but with slightly less expansion in the 4-inch barrel than the Remington load. Federal’s version of the FBI load completely failed to expand with all ten rounds fired.

“In general, barrel length did not have a major impact on performance for the .38s that we tested. The loads that failed to penetrate or expand typically failed with both test guns.”

In general, barrel length did not have a major impact on performance for the .38s that we tested. The loads that failed to penetrate or expand typically failed with both test guns. The Remington and Winchester 158 gr +P LSWCHP loads were the only .38 Specials that did well with the 4-inch barrel but not with the 2-inch barrel.

The popularity of lightweight snub nose revolvers has many shooters in search of a .38 Special load with reduced recoil. The Hornady 90 gr Critical Defense Lite was probably the mildest hollow point we tested, but I was not impressed with its shallow penetration averaging around 11”. Expansion was consistent but limited with an average of .44”. Federal’s 110 gr Hydra Shok Low Recoil load had slightly better penetration, but even less expansion than the Hornady Lite. The standard pressure version of Hornady’s 110 gr Critical Defense is not advertised as a low recoil load, but could easily pass for one. Its performance was similar to the Hornady Lite, except with sufficient expansion at just over 14” with both barrels. The Winchester Train and Defend mentioned above was also a light recoiling load with good performance.

My personal favorite reduced recoil load is one that’s easy to overlook: the Winchester 148 gr Super-X lead wadcutter. This load easily had the least amount of felt recoil out of all the guns we tested, yet it penetrated to about 16” out of both test barrels. None of the bullets expanded, but they are not designed to. As I explained in my wadcutter article last year, the sharp shoulder of the wadcutter bullet crushes soft tissue, creating more of a hemorrhaging effect than a simple round nose bullet or a hollow point that fails to expand.

This benefit is not apparent when looking at the gel test results, but for many years, ballistics researchers have noted that the real-world effectiveness of the humble wadcutter is far greater than its minimal recoil would suggest. The Winchester wadcutter, along with the lead wadcutter loads from both Federal and Remington, make excellent loads both for practice and self-defense for the ultra-lightweight revolvers or for inexperienced shooters or anyone who struggles with the recoil of their revolver for any other reason. That said, for steel frame revolvers and more experienced shooters, an expanding hollow point is probably the way to go.

Moving on to the .357 Magnums, only 4 out of the 20 that we tested had any failures to expand and there were just a couple of instances of under-penetration. But over-penetration was fairly common. Barrel length did make more of a difference here than with the .38s. Depending on where you draw the line for acceptable penetration, there were 4 loads that did well with the 4-inch barrel but not with the 2-inch snub nose: the Speer 125 gr Gold Dot, Hornady 125 gr XTP, Buffalo Bore’s short barrel loading of the Barnes 125 gr XPB bullet, and the venerable Federal 130 gr Hydra-Shok.

On the flip side, another 4 loads showed ideal results with the 2-inch barrel but over-penetrated with the 4-inch barrel: the standard loading of Buffalo Bore’s Barnes 125 gr XPB, the Remington 158 gr SJHP, the Barnes 140 gr XPB VOR-TX, and Federal’s Vital-Shok using the same 140 gr Barnes XPB bullet.

It has frequently been said that magnum loads fired through a snubby revolver are unlikely to be any more capable than a .38 +P, but looking at our test results, that does not seem to be the case. Instead, we see that each of these bullets appears to have a specific velocity window in which it will reliably expand. If the particular revolver being used pushes the bullet either too slow or too quick to hit that window, a fabric barrier may be all it takes to prevent the bullet from expanding. Some of these loads might deliver adequate performance if they are matched with the right revolver, but an ideal defensive load will have a large enough “window” that it is likely to expand with the barrel length and velocity of any common 2 to 4-inch barreled revolver.

When we narrow our gel test results down to magnum loads that stayed within the 12”-18” range and had consistent expansion out of both barrels, we get four solid performers: Barnes 125 gr Tac-XPD, Corbon 110 gr JHP, Speer 135 gr Gold Dot Short Barrel, and the Winchester 125 gr PDX1 Defender. These loads all averaged between 12 and 16 inches of penetration with expansion of no less than .55”. The Barnes load was the standout for expansion with a .75” average from the 2-inch barrel and .69” from the 4-inch. If we allow for just a couple of inches of over-penetration, we can add the Remington 125 gr Golden Saber to the list. The Hornady 125 gr Critical Defense load wasn’t bad either, though it only expanded to .52” with the 2-inch barrel.

Gel test results can be useful, but they don’t tell you anything about the effects of recoil. Unfortunately, there is just no practical way to quantify that and put it on our chart. Even so, there is a world of difference between shooting a standard pressure .38 and a high-velocity magnum load and not just in terms of discomfort. Generally speaking, .357 Magnum delivers more recoil than the average gun owner can manage without significantly impairing their ability to shoot quickly and accurately.

“Generally speaking, .357 Magnum delivers more recoil than the average gun owner can manage without significantly impairing their ability to shoot quickly and accurately.”

Now, if you are not like the average gun owner and you actually practice on a somewhat regular basis, you can probably get decent results shooting some of the less severe magnums out of a steel frame revolver. Out of the six magnum loads that did exceptionally well in our tests, three of them had relatively low recoil compared to the others: The Winchester PDX1, the Remington Golden Saber, and the Speer 135 gr Gold Dot short barrel load. I would probably use one of those three if I wanted a good self-defense magnum load. Looking at the gel test results, there is not a significant difference between these and the loads with heavier recoil. 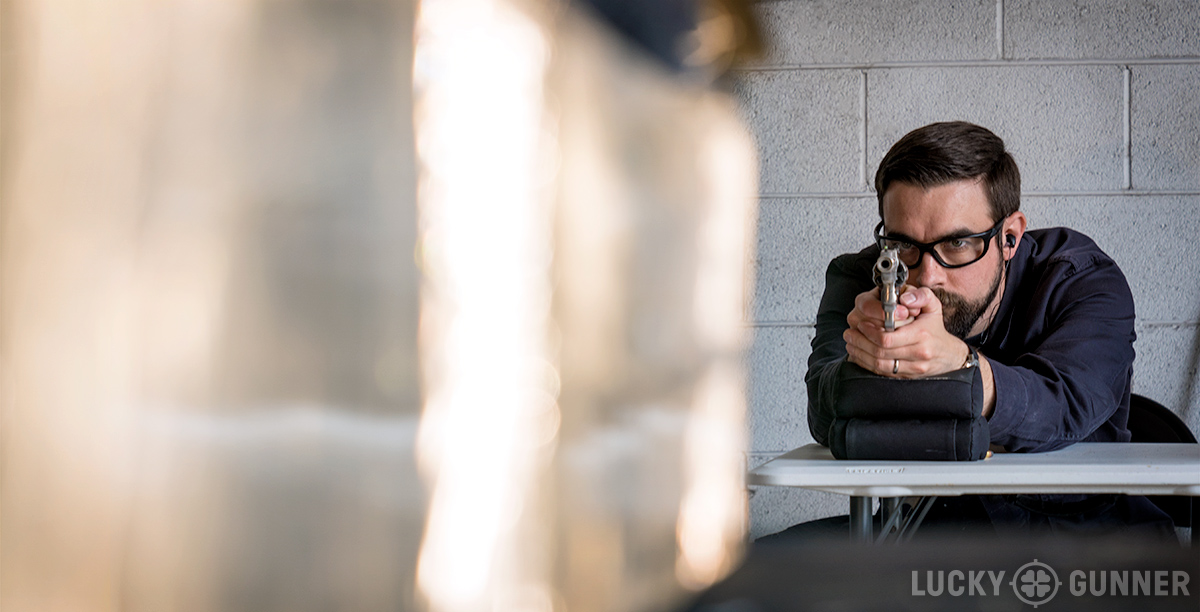 But also keep in mind that the performance of these magnum loads is also pretty much identical to some of our 9mm loads from the short barrel semi-auto gel tests. For both calibers, the best performing loads showed around 14″-18″ of penetration with an expanded bullet average somewhere between .55” and .75”. There are plenty of reasons you might want to use a revolver instead of a semi-auto for self-defense, but if you’ve primarily been drawn in by the allure of the awesome power of the .357 magnum, you might consider that you could probably get the same ballistic performance out of a 9mm but with a lot less recoil, noise, and muzzle blast. And for that matter, you really aren’t losing a whole lot if you go to one of the better .38s that we tested, and I think that’s going to strike the ideal balance between recoil and effectiveness for most people, particularly in short barrel carry revolver.

I’ll be diving into this issue of recoil a little deeper in my next article. For now, go take a look at the full test results and if you find this kind of thing helpful, please consider supporting these projects by getting your ammo from Lucky Gunner.

Snub Nose Sights: Do They Matter?

In my last article, I addressed the myth that it's impossible to use your sights under the stress of a violent...