Shooting one handed is one of those skills that most shooters, myself included, don’t really work on as much as we should. We know from looking at what’s happened in past gunfights that getting a solid two-handed grip on the gun gives us a much better chance of success, but sometimes that’s not possible. One hand might be occupied holding a flashlight or the hand of a child, or we might get injured on one side, but we still need to shoot. Practicing one handed is not always fun because it’s a lot harder than how we normally shoot, but it’s an important skill to learn.

I’ve demonstrated a couple of techniques for one-handed shooting in the video below, or you can keep reading for the boring old text version.

There are a ton of different techniques for shooting one-handed and I’m not going to say there’s just one correct way to do it, but I’m going to give you a few tips that have worked pretty well for me. For the video, I demonstrated a few techniques with the Walther PPS M2 that I’ve been evaluating. It’s a small 9mm so it exaggerates the effects of recoil. And that’s really the big challenge with shooting one-handed — recoil management. With a gun this small, if I’m not really proactive about getting it under control, it’s going to move around a lot. So let’s look at some ways to mitigate the effects of that recoil.

First, I’m going to move my feet. I want my strong foot to be forward so I can get more of my body weight behind the gun. I really want to lean into it. A tip I got from Tom Givens is to always remember to bend the knee on the leg in front. That will allow me to really get my weight forward. Simply by shifting my weight, the gun moves significantly less when it recoils.

In an actual shooting, we might not get to choose how we’re standing. We might not even be standing at all. So let’s look at some other parts of this. Assuming the threat is more than arm’s reach away, I want my arm straight and fully extended. But I don’t want to lock my elbow. It needs to have a little bit of flex. If I lock my elbow, the gun sort of vibrates and the sights appear to wobble around in between shots. That makes it tough to get good hits. If I just flex the elbow a little bit, it acts a shock absorber and I can recover from recoil much quicker. 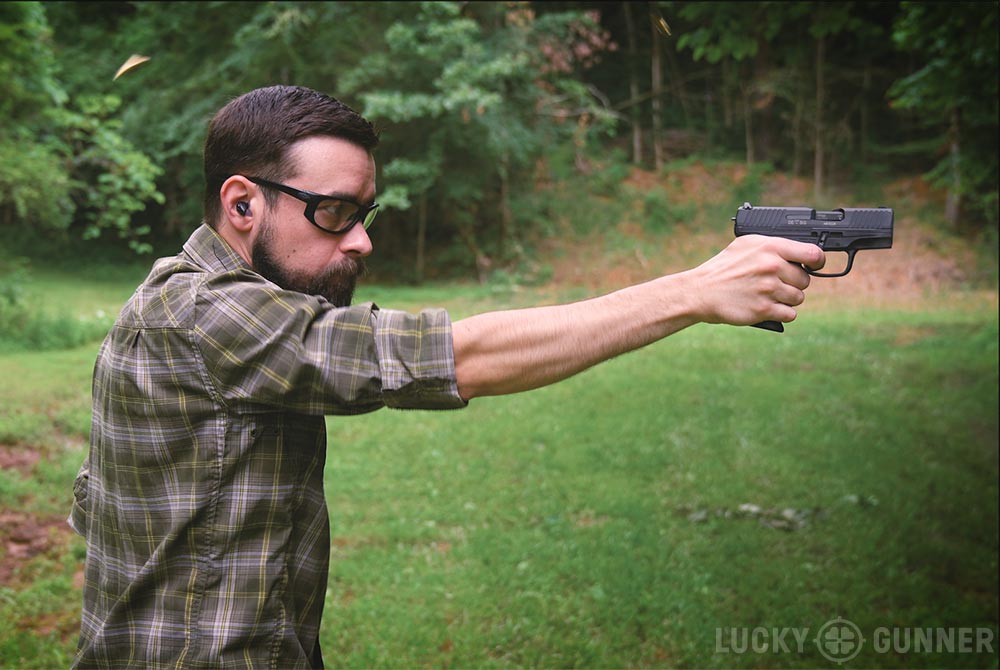 So I don’t want to lock my elbow, but I do want to lock my wrist. I want my wrist straight and I want a real death grip on the gun. Most people don’t grip the gun tight enough, so it’s often helpful to suggest that you grip the gun as hard as you absolutely can. However, if you grip the gun too tight, you might have trouble moving your trigger finger, or you may experience “trigger freeze” where you fail to allow the trigger to completely reset between shots. A helpful workaround is to think about using your ring finger and your little finger to squeeze the grip into your palm. Relying a little less on the middle finger will help keep that trigger finger flexible while still having a firm grip.

Having a solid grip will help with recoil control, and it will also help avoid a malfunction. Most of the time people experience a pistol malfunctions in a fight, it’s because they have a poor one-handed grip, and this is especially a problem with small pistols. Maybe they’ve gripped the gun way too low, or they’re bending their wrist at some awkward angle. The frame has to be on a solid platform in order for the slide to completely cycle. Keep the wrist straight, the fingers tight, and the slide in a straight line with the forearm. Make sure the web of your thumb is as high up on the backstrap as it can go. That will go a long way toward making the gun function properly.

A really common one-handed technique is to rotate or “cant” the gun slightly. That can feel like a more natural position for the arm to be in and a lot of people feel like it gives them more control over the gun. I think that’s fine if that’s what works for you. I tend to cant the gun a small amount, but if I go too far and the gun is recoiling up and to the left, I have a harder time tracking the sights. I’m used to seeing the sights go up and down, so I try to keep the pistol as vertical as possible.

What should you do with your other hand when you’re shooting one-handed? A lot of people like to make a fist and hold it up to their chest. That can feel a little more stable. I usually just keep my hand down at my side. That’s probably where it’s going to be if it’s injured or if I’m holding a child’s hand, or trying to keep somebody from walking in front of me. I think it’s fine to practice it either way, you just want to make sure your hand isn’t floating out in front of you where it can get in front of the muzzle.

When you’re practicing one-handed, keep in mind you’re not going to be as fast or as accurate as you are with both hands. So slow down and move the target a little closer until you get the hang of the technique. You might start with an 8-inch circle at 3 yards and see if you can get a one shot per second pace going with 100% accuracy. When you can do that, pick up the pace or move the target back a few feet. Shooting one-handed is always going to be a little slower, but with some practice, it can still be very effective.