There are some very good reasons why sub-compact single-stack 9mm pistols are the most popular self-defense handguns on the market today. They are easy to conceal and comfortable to carry all day, but you still get the effectiveness of a full power service cartridge. The downside is that most of these pistols deliver recoil that’s right on the edge of what most shooters can reasonably control. That affects speed and accuracy and can even make practicing with these guns feel like a chore sometimes. The Walther PPS M2 is as close as you’ll find to an exception to that rule. It shoots like a small, lightweight 9mm, but it’s far easier to handle than most, while still being practical for everyday carry. My full review is in the video below, or you can scroll down for the blogified version.

There are three pistols that I typically recommend as being the best of the ultra-compact 9mm’s: the Smith & Wesson M&P Shield, the Glock 43, and the Walther PPS. Out of those three, the PPS delivers the least amount of recoil and is by far the easiest to shoot, but it’s got a couple of quirks that make it less than ideal for a lot of people. Last year, Walther addressed those issues with the updated PPS M2.

The most substantial change was the mag release. For the M2, Walther switched from a paddle style mag release on the trigger guard to a more traditional mag release button on the frame like what most of us are used to. 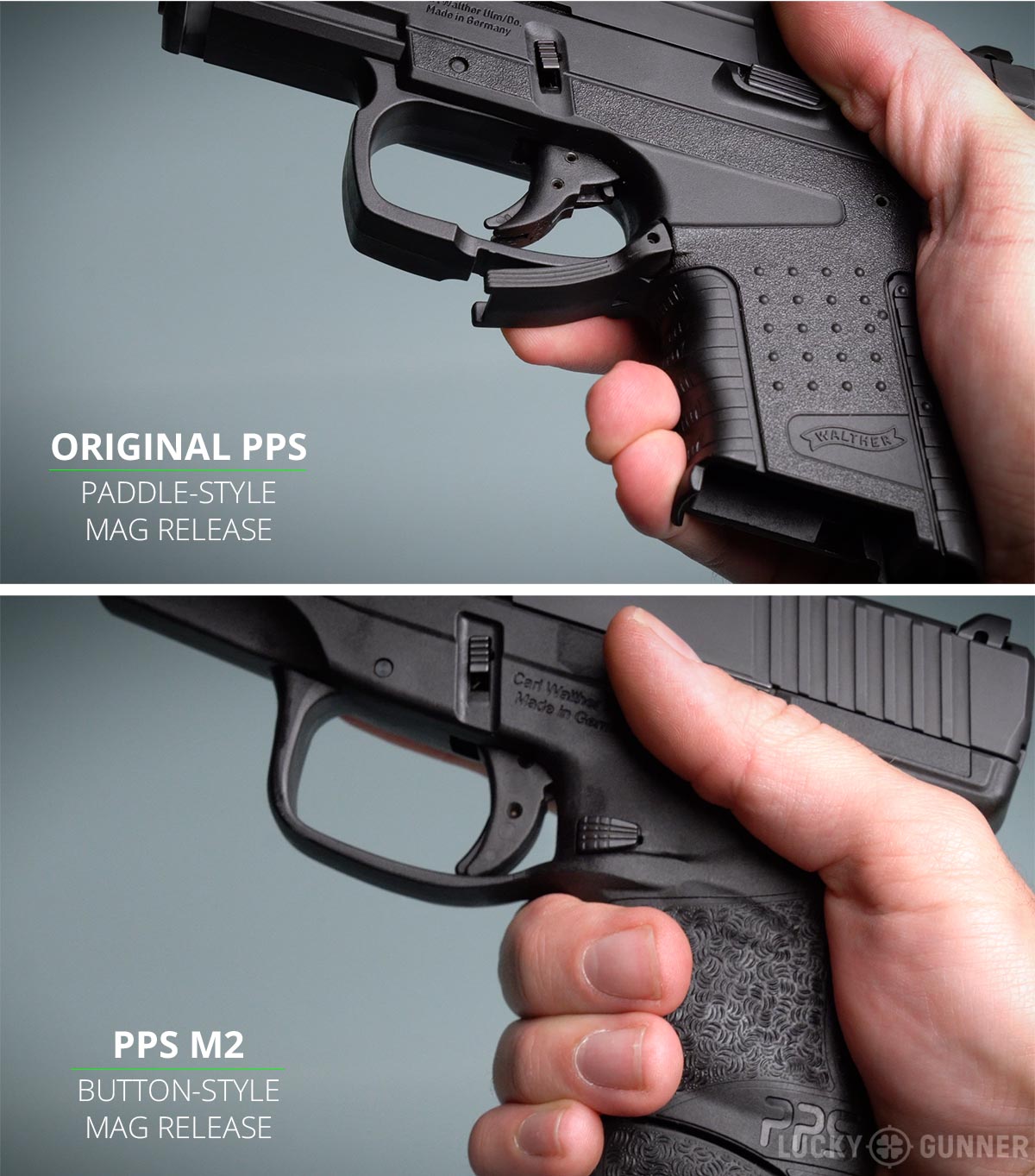 Walther also discarded the removable backstraps that would disable the gun when removed and replaced them with a completely re-contoured grip that feels less blocky and, I think, is more ergonomically sound. The frame could use more aggressive texture to help maintain a secure grip, but that could be said of almost any of these small pistols. Fortunately, it’s easy enough to remedy this with some grip tape like the offerings from Talon grips. The front strap still has finger grooves, which I’m not a big fan of, but they are fairly subtle and shouldn’t get in the way for most people.

I was glad to see that my favorite feature from the original PPS remained on the M2 and that’s the striker indicator. When the trigger is pulled, a small rod-like piece protrudes from the backplate on the slide. This is so you can put your thumb on the back of the slide when you re-holster and if something were to catch your trigger like a drawstring or a piece of your shirt, the striker indicator will poke you in the thumb to let you know something is wrong before you get an unexpected bang. A large percentage of unintentional discharges occur when re-holstering the gun, and this feature goes a long way toward preventing that possibility if you take advantage of it. 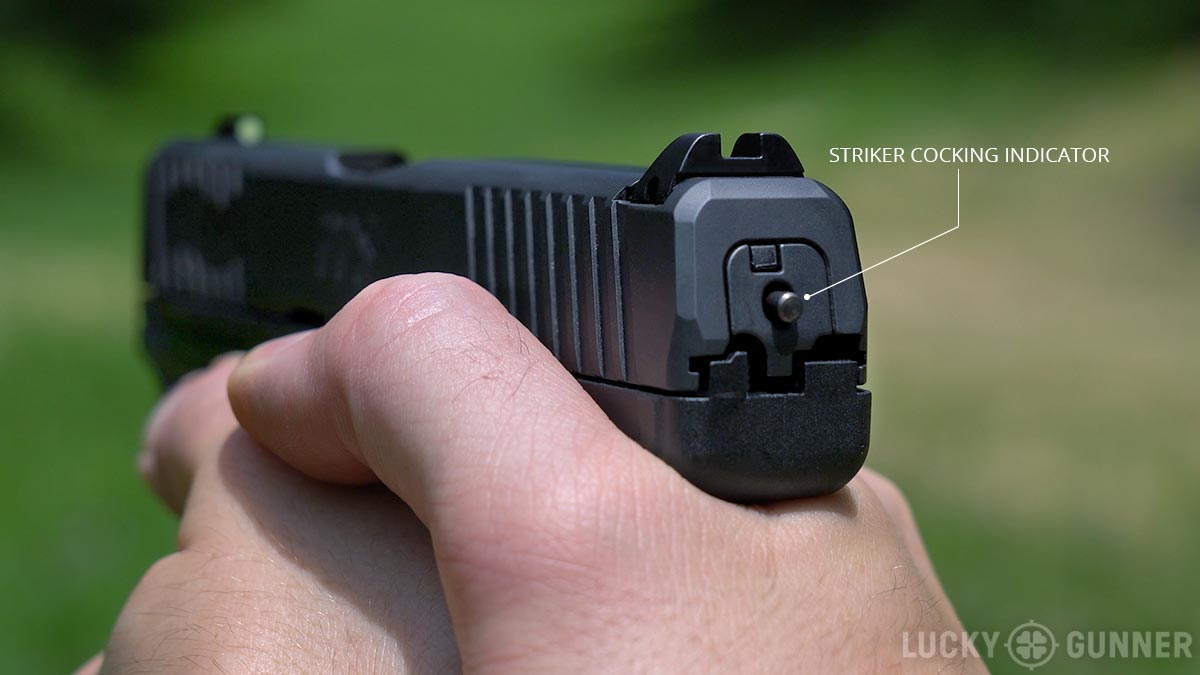 Another feature that sets apart the PPS M2 from its competitors is the magazines. Walther makes 6-round flush fit mags as well as 7 and 8-round extended magazines. As far as I know, Walther is one of the only companies offering a single stack 9mm with factory magazines in three different sizes and capacities. The only real downside here is that the M2 is not compatible with magazines from the original PPS. The standard PPS M2 ships with one 6-round and one 7-round magazine. The PPS M2 LE Edition, which is the version Walther loaned us to review, includes those two magazines in addition to an 8-round mag. 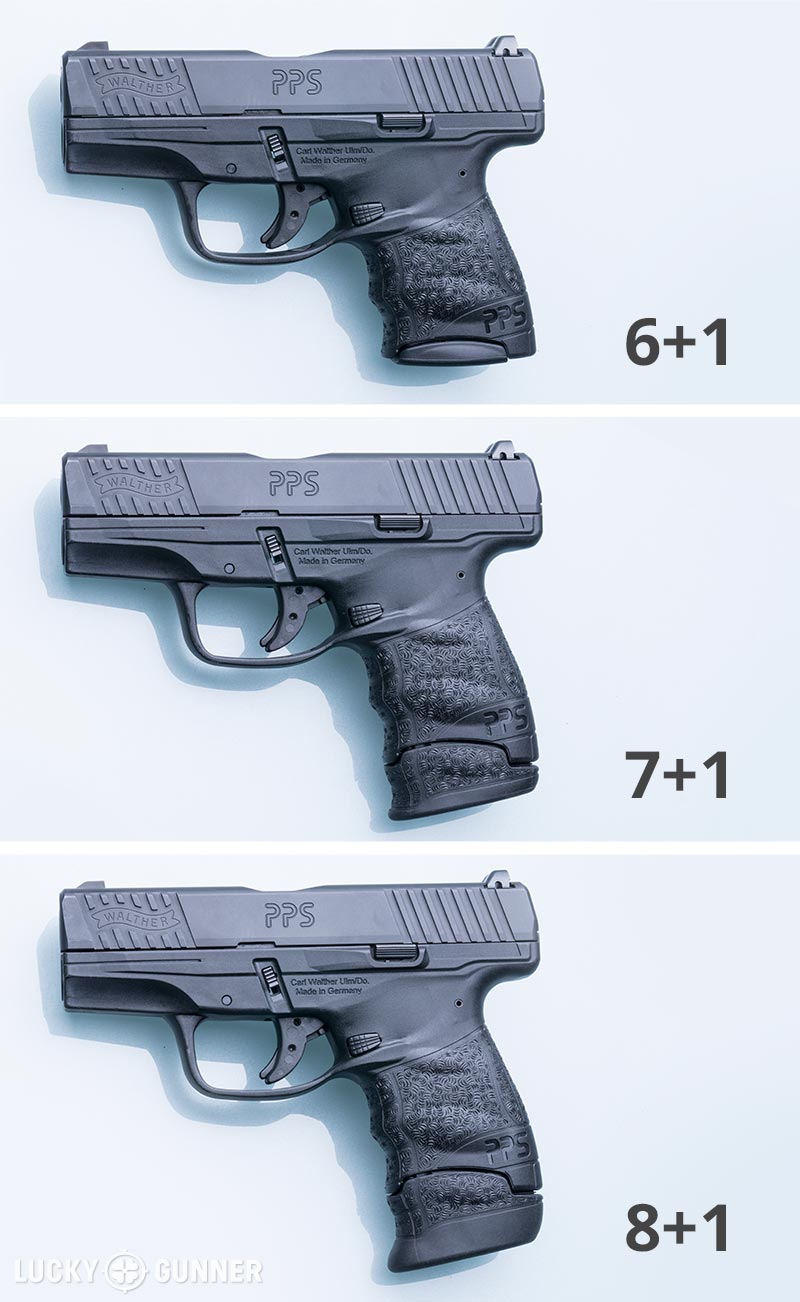 Like most modern pistols, the PPS M2 is equipped with three-dot sights with a rear sight that is drift-adjustable for windage (although I have blacked out the rear dots with a sharpie for my evaluation). The white dots on the LE edition are “phosphorescent”, which is really just a fancy term for “glow-in-the-dark.” They will glow for a short time after being exposed to light, but they do not provide constant low-light illumination like true tritium night sights. Either of the factory sight options is completely usable, but there are plenty of aftermarket sight options if you prefer a different setup.

I’ve got just over 1300 rounds through this PPS M2 with no malfunctions. I cleaned and lubed it when I first took it out of the box, and haven’t done any maintenance since. It does have some weak ejection patterns with lower pressure FMJ range ammo and sometimes the spent casings end up hitting me in the top of the head rather than flying off to the right. It’s a minor annoyance but the gun has functioned fine otherwise.

I mentioned that the PPS is easier to shoot than other 9mms of this size, and I would attribute that to less felt recoil and a grip with more surface area. This gun is just the slightest bit larger than most of its competitors. It’s probably bigger than what you would consider a pocket pistol. But that extra size makes it easier to hang onto and there is just less movement when the gun goes off.

I also think the trigger is better than most, especially after the first couple hundred rounds. It breaks around 6.5 pounds and has a more consistent feel than other striker-fired triggers. It’s not amazing or anything, but for small pistols like this, the bar is set pretty low for a decent trigger. The bottom line is that it’s easier to get a good clean trigger press without disturbing the sights on the PPS M2 than it is with other pistols in this category.

So how much of a difference are we talking about? You might get some idea from looking at our ongoing handgun scoreboard. When I ran the Walther PPS M2 through the official Lucky Gunner Handgun Performance Test (check out this post for details and course of fire), I managed to get a final score of 40.48 which is almost exactly halfway between the current top and bottom scores on the list (the number one spot is currently occupied by the Wilson/Beretta 92G Compact Carry at 34.84 and the lowest score of 45.60 belongs to the Glock 43). I haven’t run many other small sub-compact handguns through the test yet, but the Walther is looking pretty good so far. It was clearly a better performer for me than the Glock 43, even though I didn’t quite manage to top any of the full size or compact handgun scores.

The 25 yard bench rest accuracy test results were decent, but not outstanding. The best 5-shot group size averages were around 4 inches with the Black Hills and HST 124 grain +P. That’s on par with what we’ve come to expect from most sub-compact pistols. Oddly enough, the American Eagle FMJ was the third most accurate load, followed by the 124 grain Gold Dot, and then the other two HST loads we tried were just not grouping that well.

This is a good opportunity to reiterate the importance of testing your carry load with your carry gun to make sure they play nice together. The PPS M2 didn’t have stellar accuracy from the bench with all of the loads we tested, but the practical accuracy is plenty adequate. As my experience with the handgun performance test demonstrated, the Walther is definitely easier to shoot accurately unsupported than most small handguns.

I think it’s tough to find any major faults with this pistol except that the gun is not very left-hand friendly. The slide release is only on the left side and the mag release is not reversible. I don’t think this should be a dealbreaker for left-handed shooters who may otherwise like the PPS M2 since there are techniques that will allow lefties to run a right-handed gun just fine. But I say that as a right-handed person who doesn’t have to deal with that inconvenience, so take that with a grain of salt.

There is one minor concern a few PPS M2 owners have mentioned to me involving a small dent that appears on the barrel after running a few hundred rounds through the gun. It seems that on some PPS M2 pistols, the trigger bar contacts the rear of the barrel just below and to the right of the chamber at some point in the firing cycle. Eventually, this causes a shallow indentation to form in the barrel. The sample pistol that Walther loaned us for this review is among those that have been affected, which you can see in the photo below highlighted by the green box. 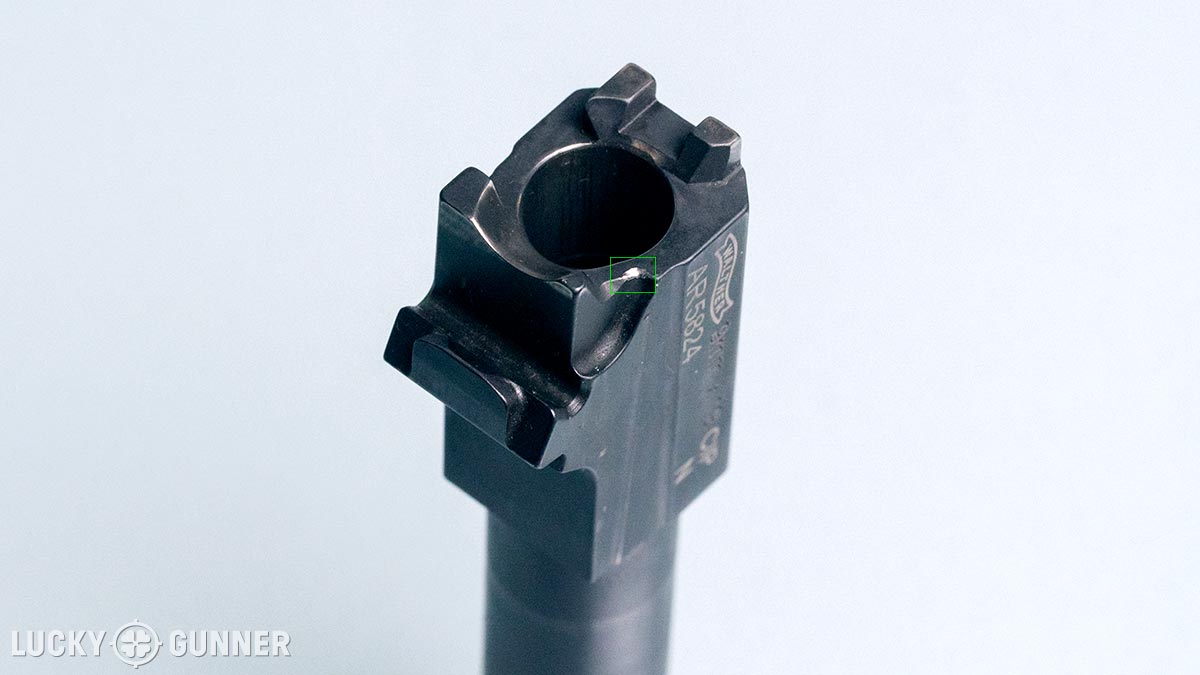 While far from ideal, I don’t have any evidence that this is anything more than just a cosmetic blemish. The review gun has not shown any change in accuracy or reliability from the first rounds fired to the last. I reached out to our contact at Walther to get their official word on the issue. They said that the indentation is just normal wear and tear, and they have not seen it lead to any functionality or performance issues with customer’s guns. If any issues do arise with a PPS M2, Walther says that it will be covered under the lifetime warranty included with all of their pistols. I typically maintain a healthy amount of skepticism when gun companies respond to these kinds of issues, but in this case, I think Walther’s claim of “normal wear and tear” is legitimate. The small mark on the barrel would not prevent me from carrying this pistol.

If you’re looking for a slim, concealable 9mm as a primary carry gun that you will still want to shoot at the range, the Walther PPS M2 is one of the best options on the market. And with the $100 rebate Walther is running until 9/15/2017, it’s also one of the most affordable.

The Walther PPK Is Not Very Good