It’s time for another action-packed installment of Start Shooting Better!  This time, John and I walk through the FBI Qualification test that all FBI agents are required to pass in order to carry a firearm on duty. While it’s not necessarily an ideal tool for skill development, there are a lot of benefits for the average armed citizen in being able to demonstrate that they can pass a federally recognized shooting standard. Watch the video below for details (or scroll down for the transcript) and give it a try the next time you’re at the range.

CHRIS: Hey guys, I am Chris from Lucky Gunner and welcome back to another episode of our Start Shooting Better series. In this series, we’re showing you different drills and tests that you can do at the range to help improve your overall shooting ability. I’m here again with John Johnston from Citizen’s Defense Research and the host of Ballistic Radio. Today we are looking at the current FBI qualification. So John, why don’t you give me a general outline of what that looks like.

JOHN: So it’s a 60 round qualification that pretty much has all the skills that the FBI has decided is important for their agents to be able to exhibit in the shootings that they run into. So we’ve got everything from draw to shot, weak hand only transfers, reloads, and shooting behind cover — stuff like that from distances of 3 yards to 25 yards. 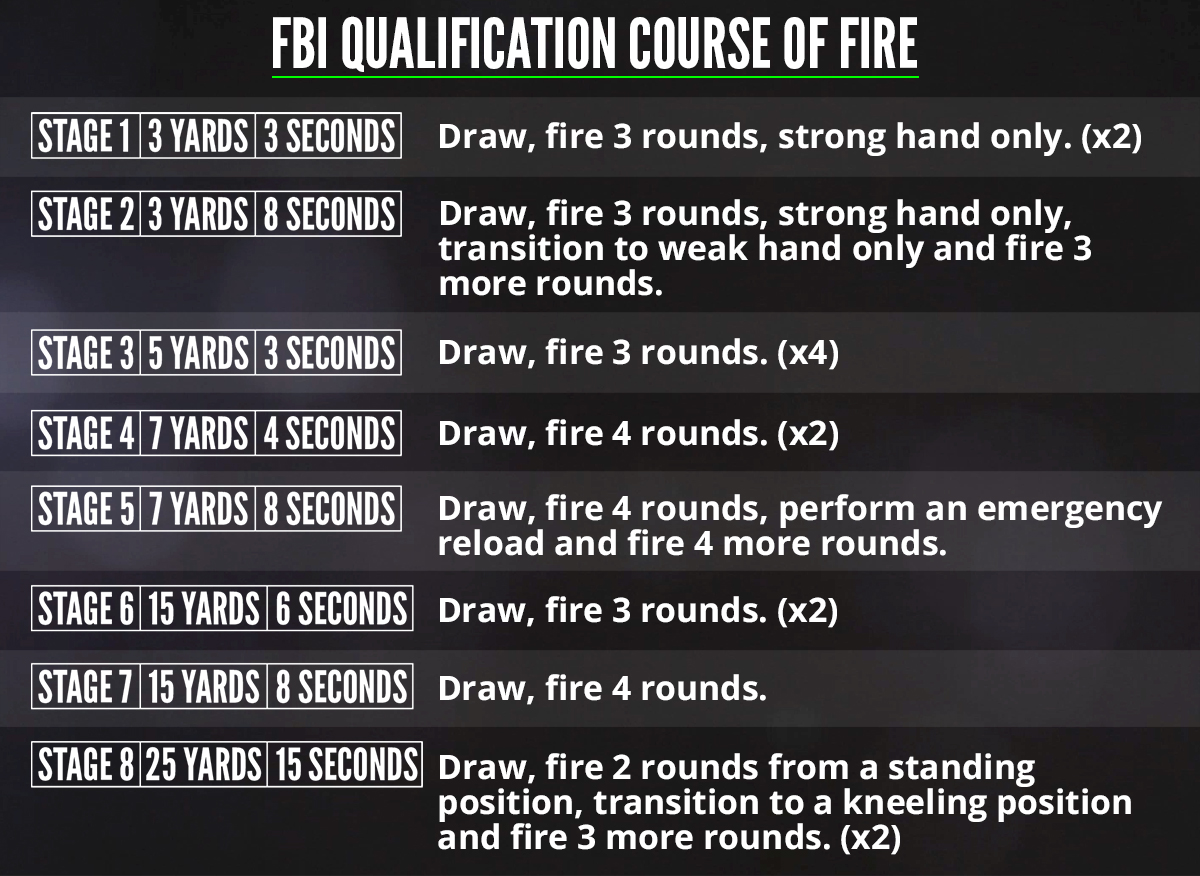 CHRIS (VOICE OVER): The FBI Qualification consists of 60 rounds fired over 8 stages. The starting point for all stages requires the gun to be in a concealed holster. You can use any target with the FBI QIT reduced silhouette. For our demo runs today, we’re using the IALEFI-QP target, so our scoring zone will be this whole upper portion of the silhouette. Shooters need to get at least 80% of their hits somewhere on the silhouette in order to pass. Each stage has a time limit and any shots fired over that time limit count as misses.

Stage 1: From 3 yards in 3 seconds, draw and fire three rounds with the strong hand only. Do this stage 2 times.

Stage 2: From 3 yards in 8 seconds, draw, fire 3 rounds with the strong hand only, then transition the gun to the support hand and fire 3 more rounds.

Stage 4: From 7 yards in 4 seconds, draw and fire 4 rounds. Do this stage twice.

Stage 8: Starting a few feet behind the 25 yard line, in 15 seconds, take one step forward, draw and fire 2 rounds from a standing position, then transition to a kneeling position and fire 3 more rounds. Do this stage twice.

The official version of the FBI test calls for the shooter to fire from behind cover this stage, but that’s difficult to set up at a lot of ranges, and it really shouldn’t have a huge impact on your score if you go without it. 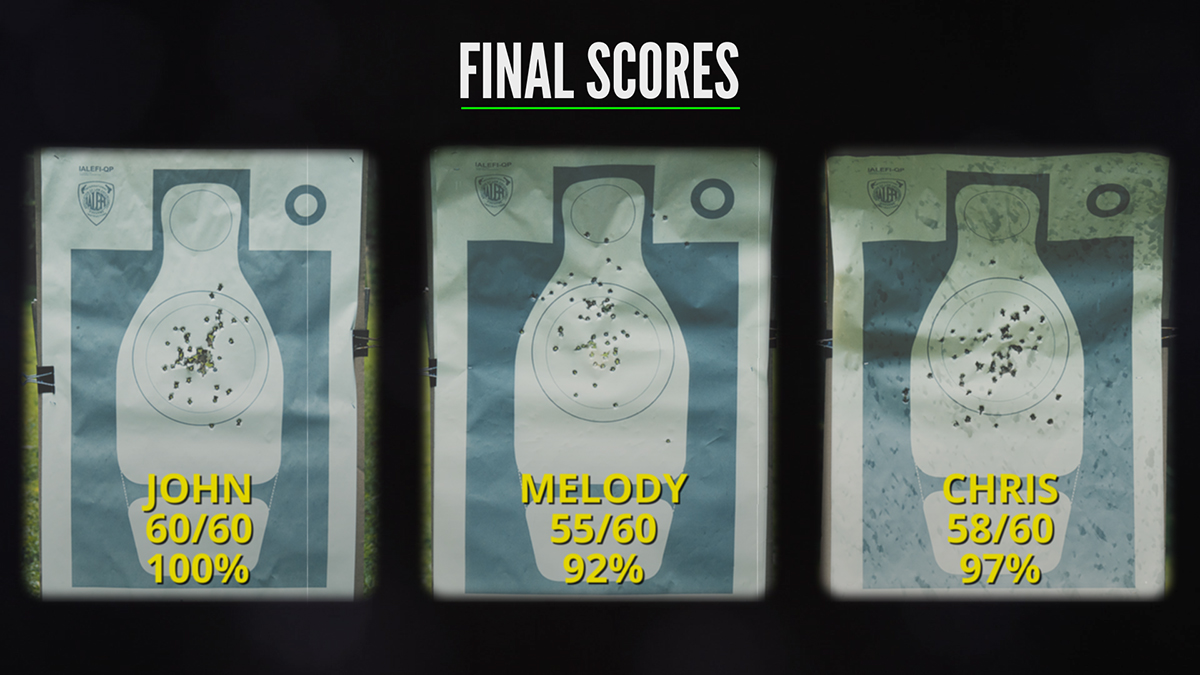 CHRIS (TO JOHN): So what do you think are some advantages to running a test like this?

JOHN: It’s really nice for the armed citizen just because it is a nationally recognized standard that, if you can meet it and you are ever called into court for whatever reason, you can say, “I’m able to meet the standard the FBI sets for their agents.”

CHRIS: Do you think there’s any benefit to running this test and having someone observe you who can verify that you’re able to do it?

JOHN: Yeah, so that’s the other thing — if you go out in your backyard and shoot this and you don’t have anyone to watch it, having on video wouldn’t be a bad idea. Having someone to run the timer and put their name on it, too — better yet, go and take it when you’re at a class or something like that. I know Tom Givens runs this from time to time depending on what the class is, Melody and I at Citizens Defense Research run it. There’s a bunch of quality instructors that will run you through this test and keep track of it. That’s something that we do — we take a picture of the student standing next to their target and keep it on file just for that reason.

CHRIS: So how would you compare something like this to the average state level concealed carry qualification?

JOHN: It is much more difficult… which is actually sort of scary because it’s, honestly, an easy qual to pass.

CHRIS: So that leads to my next question, because I know you’ve got some criticisms of this test. Where do you think it falls short?

JOHN: The time standards are really generous, I think. If you, even a little bit, know what you’re doing, you’ve got plenty of time to conduct that. And also, and we’ve got one of the targets right here, the scoring zone you’re shooting at is relatively large and generous and I’d like to see a smaller scoring zone. 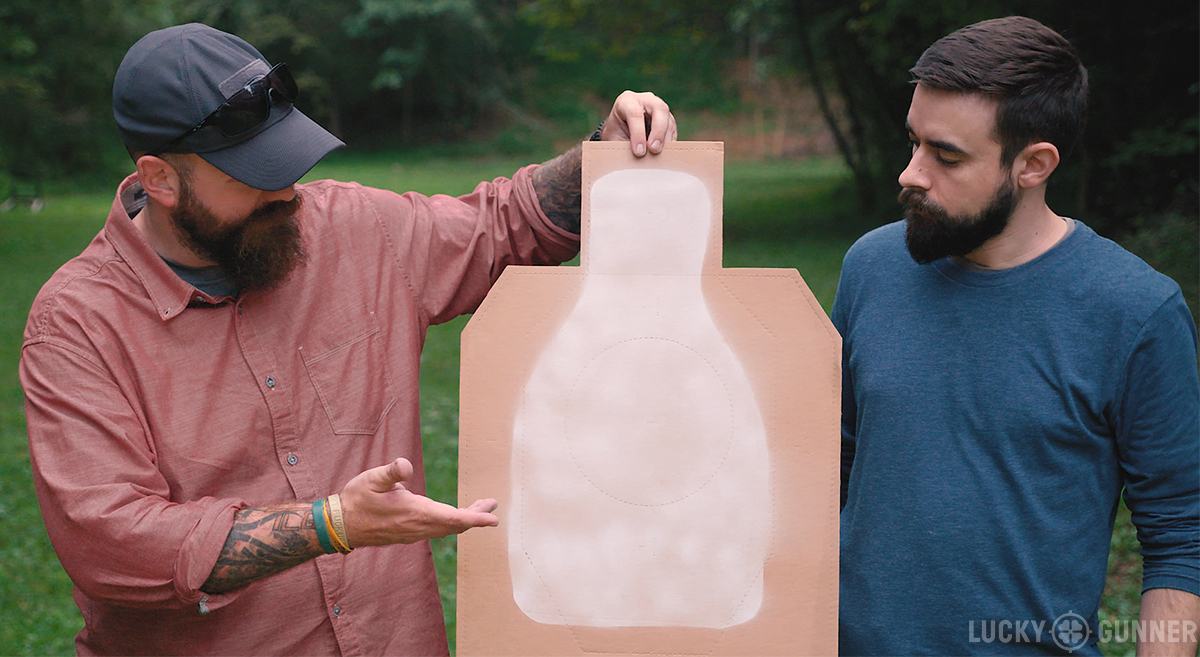 CHRIS: So this is a cardboard IDPA target and we’ve painted over it with the Q target silhouette that you’d be shooting at for the FBI qual.

JOHN: Right, and as you can see, it’s very generous. It’s essentially the -1 and the -0 area on one of those targets.

CHRIS: And normally we want to keep our shots tighter, like an 8-inch circle at the very…

JOHN: At the very most. What I would actually like to see people be able to do is if you imagine a 4-inch wide by 6-inch tall rectangle and put it somewhere in [the upper chest area] on somebody — I’d like people to be able to hit that from pretty much 3 yards to 25 yards in reasonable times. That would be the goal. I can’t always do it, but that’s what I’m trying to do.

CHRIS: Okay, so 80 out of 100 score — so how many shots does that mean you can actually drop while you’re shooting the test and still pass?

JOHN: Twelve. It’s a 60 round qualification and you can drop 12 of those and still shoot an 80% which is the standard that agents are required to hit. If you want to shoot an instructor score, you have to shoot 90% or above. Now I will say this — if you’re running it with something like a 5-shot J-frame or a Glock 42, it’s starting to get a little more difficult, but still passable. Really, the only thing that would be problematic for people at that point is the strong hand only/weak hand only stage just because of the round requirement, if you were running a J-frame, and then the reload stage. 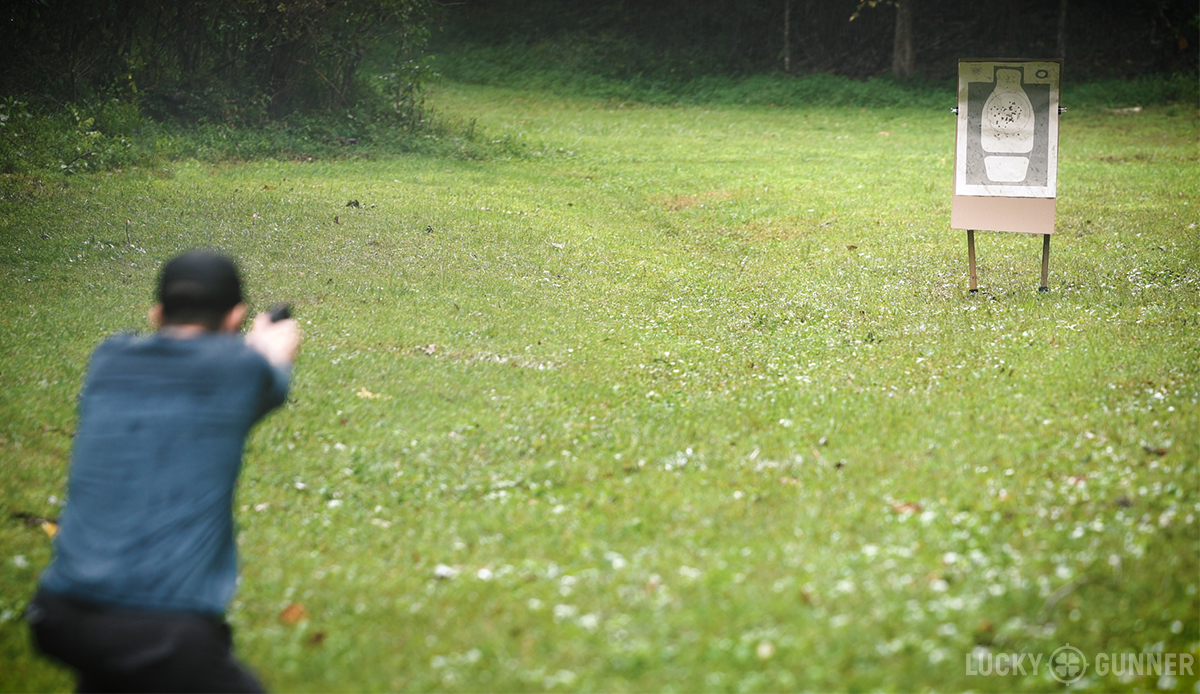 CHRIS: Right, because it’s designed around shooting a service-size, or maybe a compact firearm.

JOHN: Yeah, it’s designed around shooting a Glock 22 or a Glock 23 and now they’re moving to 17s and 19s, but either way, that size firearm.

CHRIS: If somebody tries out this drill and they just flat out can’t come anywhere close to the qual, what would be your suggestion for their next step?

The Hidden Advantage of Shooting Revolvers

You can call them obsolete if you like, but mastering the double action revolver imparts more benefits than many shooters...