That Time the Derringer Made a Comeback

The Derringer-style guns being made today are mostly patterned after the old single action Remington Model 95 that was in production from the 1860s until the mid 1930s. Because they are single action, and not particularly small next to a polymer pocket semi-auto, these guns are typically overlooked by the more serious self-defense oriented shooters and instructors. But there was a time just a few decades ago when a Derringer being produced by High Standard Firearms caught the attention of some of the industry’s most influential handgunners. Details in the video below, or keep scrolling to read the full transcript.

I can’t do a series all about pocket pistols without some discussion of Derringers.

The Derringer I want to talk about today is this double barrel High Standard made sometime in the 1970s or 80s. At first glance, it doesn’t look like anything special, but it’s actually a fairly unique design that represents an important step in the evolution of pocket pistols.

The concept of the Derringer originated in the 1850s with the muzzleloading single shot Philadelphia Deringer. Today we usually use the term to refer to any non-repeating pocket pistols. So with a Derringer, you only get as many shots as you have barrels before you need to reload. Most have one or two barrels, but some have three or even more.

Various types of Derringers were popular for concealed carry through the early 1900s, especially the ubiquitous Remington Model 95. But they were gradually replaced with pocket semi-autos and snub nose revolvers. These other pistols were not any smaller than the derringers, but they did hold a lot more ammo. They also didn’t necessarily require the user to thumb cock a hammer before firing.

In a fight at contact distance, if you somehow manage to access the gun in your pocket, the last thing you need is to have to then fumble with the hammer before you can shoot the guy who’s right up in your business. So the single action Derringer was essentially obsolete by the 1920s.

In 1962, High Standard Firearms made an attempt to bring back the Derringer with a new innovation. The Model D-100 was a hammerless double action .22 caliber Derringer. This one is the slightly revised D-101. It’s marked .22 cal which means it can fire .22 LR, .22 Long, or .22 Short. There was also a model DM-101 chambered for .22 Magnum. It fires one round at a time. There’s a mechanism in here that alternates the firing pin between the top and bottom barrels. 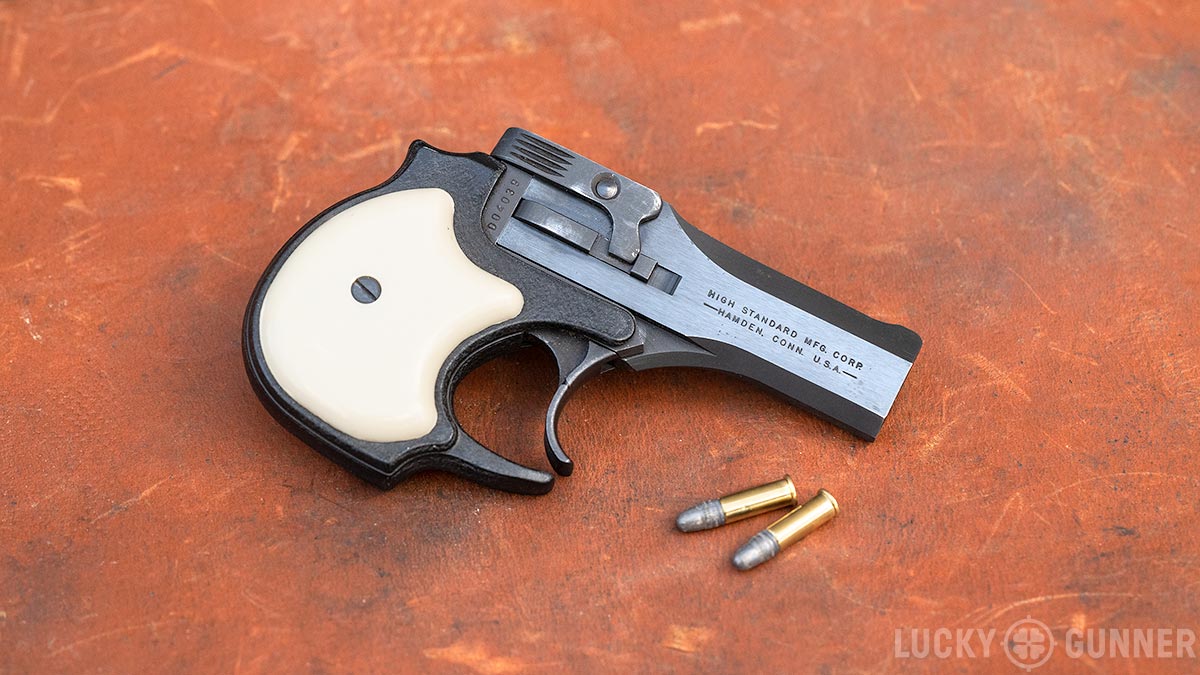 The trigger pull on this thing is a real beast. It’s got to be close to twenty pounds. But because of the way the grip is designed, I can get a lot of leverage because my finger ends up meeting the trigger almost at the second joint and that makes it a lot easier to pull. Since there’s almost no room under this half-trigger guard for your other fingers, some people will probably find it easier to pull the trigger with their middle finger and just rest the index finger along the side of the barrel. There’s no slide or cylinder to interfere with, so there shouldn’t be any problem firing it this way as long as your finger is clear of the muzzle.

To load one of these, you just lift up the stirrup here and the barrels tip down. If you keep lifting the stirrup, the extractor pops out to remove the spent cases. You just insert the rounds into the chambers and then close it up. If you’re using .22 Shorts, the manual suggests pushing the extractor back in first so the rounds don’t get caught underneath it. 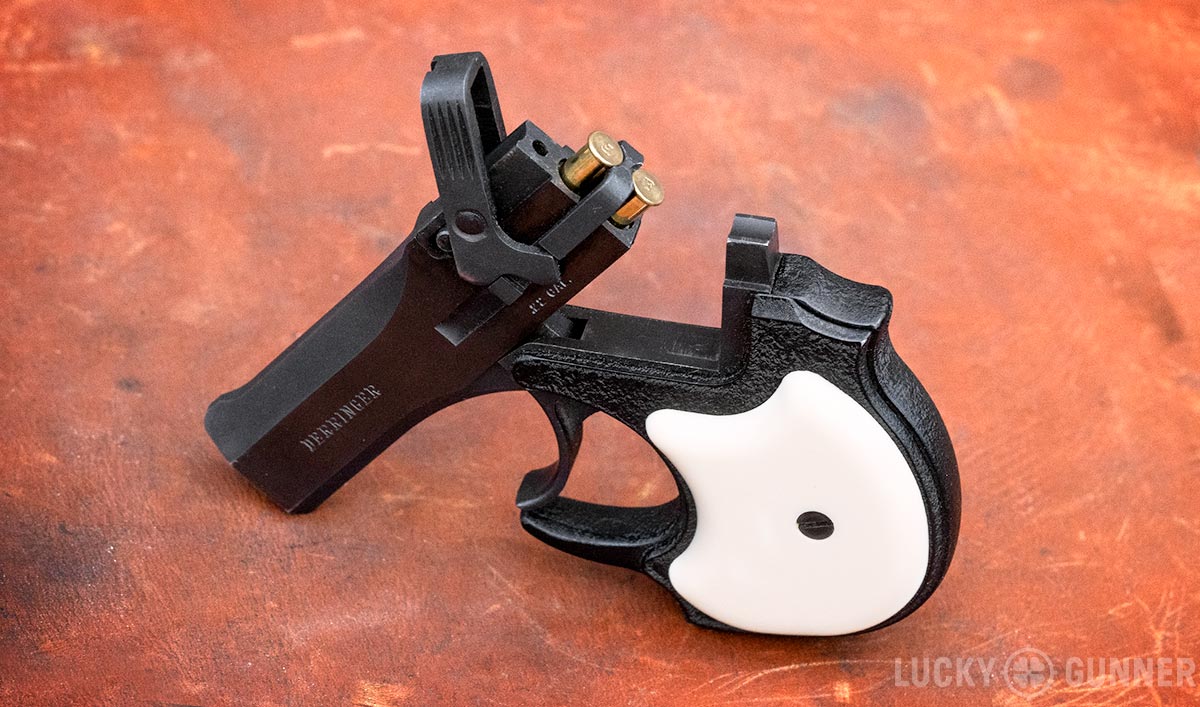 The High Standard Derringer is substantially smaller than a snub nose revolver but not a whole lot lighter than an aluminum-frame from that era like the Smith & Wesson Airweight or the Colt Cobra. It’s 11.2 ounces loaded which sounds light, but it’s all steel and it’s very dense. It feels like it would make a pretty good hammer in a pinch.

It’s roughly the same size and weight as a .25 Auto from that time period like this Beretta 950. It’s actually a bit longer than the Beretta. With the grip panels it’s not any slimmer. You can remove the grip panels and carry it without them — they don’t serve any functional purpose. There still wouldn’t be much of a size advantage over a pocket semi-auto. 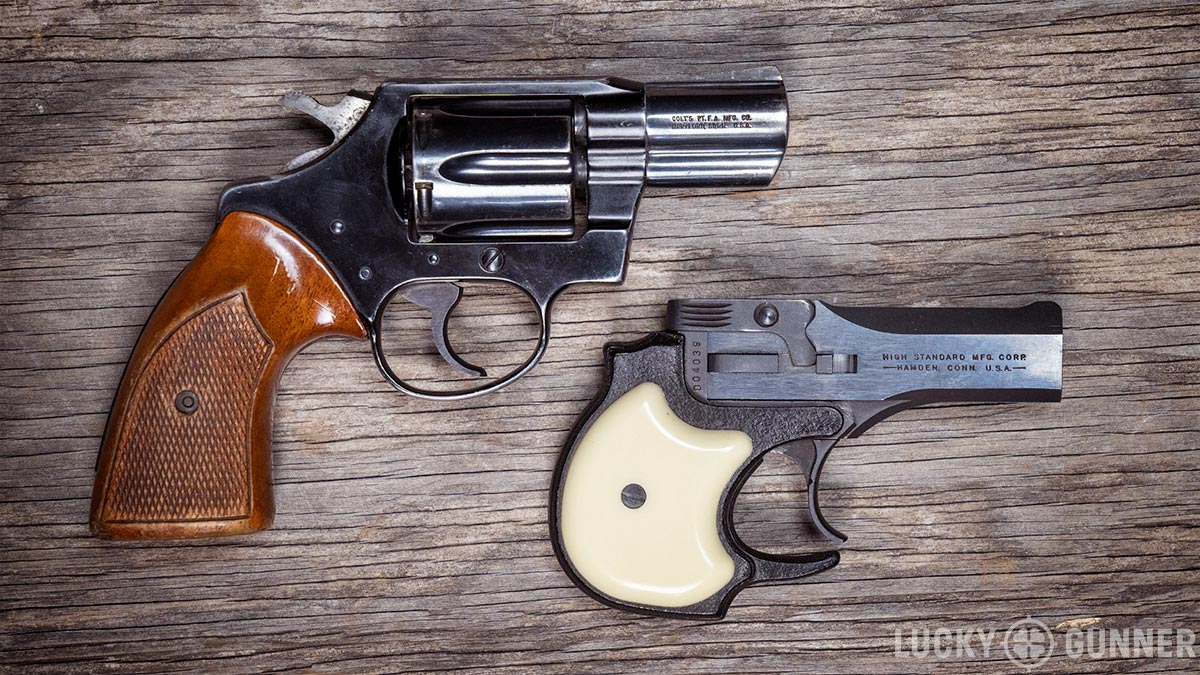 But it does have some other benefits. A lot of those old pocket pistols weren’t very reliable and they actually weren’t necessarily safe to carry with a round chambered or with the hammer cocked. The Derringer might only have two shots, but you can be pretty certain it’s going to fire those two shots when you pull the trigger and not before, even if you drop it. The High Standard had a perceived ballistic advantage, especially the .22 Magnum version, but also with .22 LR. According to some of the prevailing wisdom from that period, .22 LR was considered to be a better self-defense cartridge than .25 ACP or .32 ACP.

The High Standard Derringer was discontinued in 1984 when the company closed down. The rights to the Derringer were acquired by Bellmore Johnson Tool who started making a .38 Special version but that didn’t last very long. The American Derringer Company picked up the design shortly after and they made double action Derringers in a few calibers, but none of them appear to be in current production. 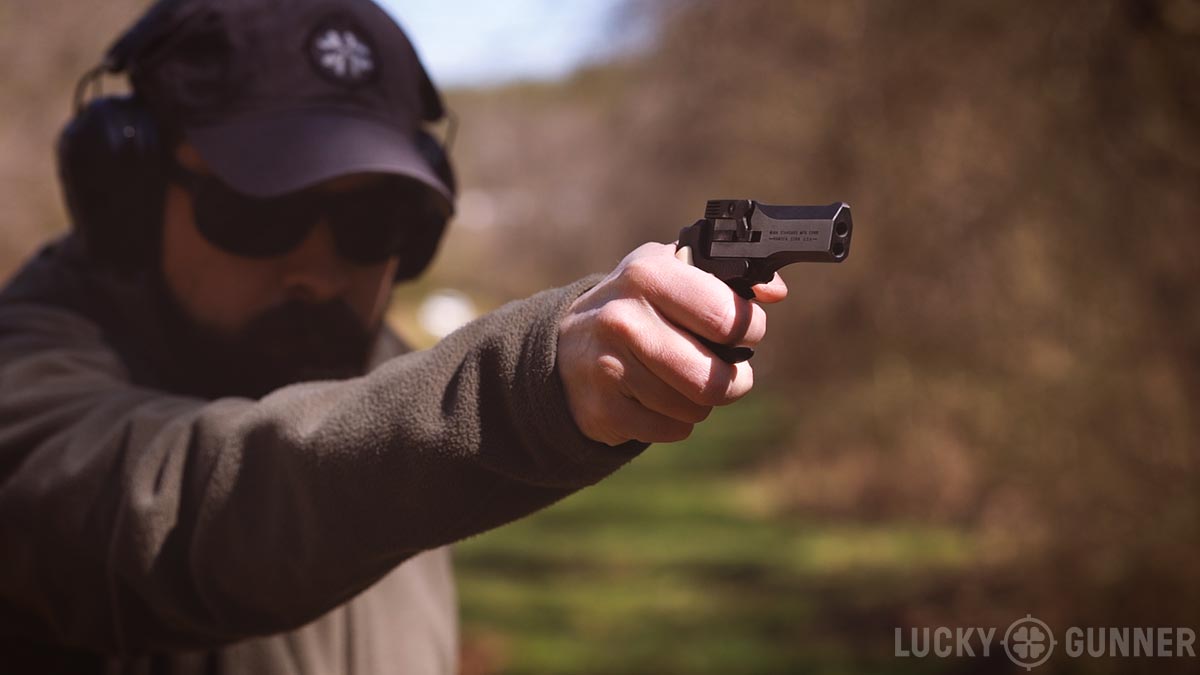 With the dozens of polymer pocket .380s we have on the market today, not many people are interested in a two-shot .22 that’s basically the same size. But when it was in production, the High Standard Derringer was actually very well regarded as a backup gun by those who were considered the self-defense experts of that time.

Our friend and firearms instructor Darryl Bolke was recently telling me that when he was just getting started as a young police officer in the 80s, a lot of the older and more experienced guys he looked up to were carrying High Standard Derringers for backup in a front pants pocket. He told me about one incident where an officer managed to survive a fight with a suspect in an elevator thanks to a High Standard .22 Magnum. That’s about as close quarters as it gets, and I’m sure he was glad he didn’t have to thumb cock that hammer first.

Why A .22 LR Pocket Gun Should Not Be Underestimated