Last week I wrote about my criteria for selecting and outfitting my firearms. Today I am going to address the actual handguns that I have chosen and explain how they met those criteria for me. The primary use criteria for my handguns is defensive: like most people in the firearm community, I want handguns that serve well in both home defense and daily concealed carry roles. Secondarily, I shoot some casual competition, and finally, every so often, I have the opportunity to wear a sidearm for defensive use against predatory animals.

The first gun that I chose epitomizes compromise, which is very near the heart of this whole exercise in frugality. We sometimes think of compromise as a bad thing, but compromise can also mean versatility. In this instance, it certainly does. This gun does a few things almost perfectly, and a lot of other things well enough. This gun is, for me at least, “The One”. The One gun I would have if I could only have one, and it is the one that the rest of my handguns are and will be based around. It is the Smith and Wesson Distinguished Combat Magnum, more commonly known as the Model 686. 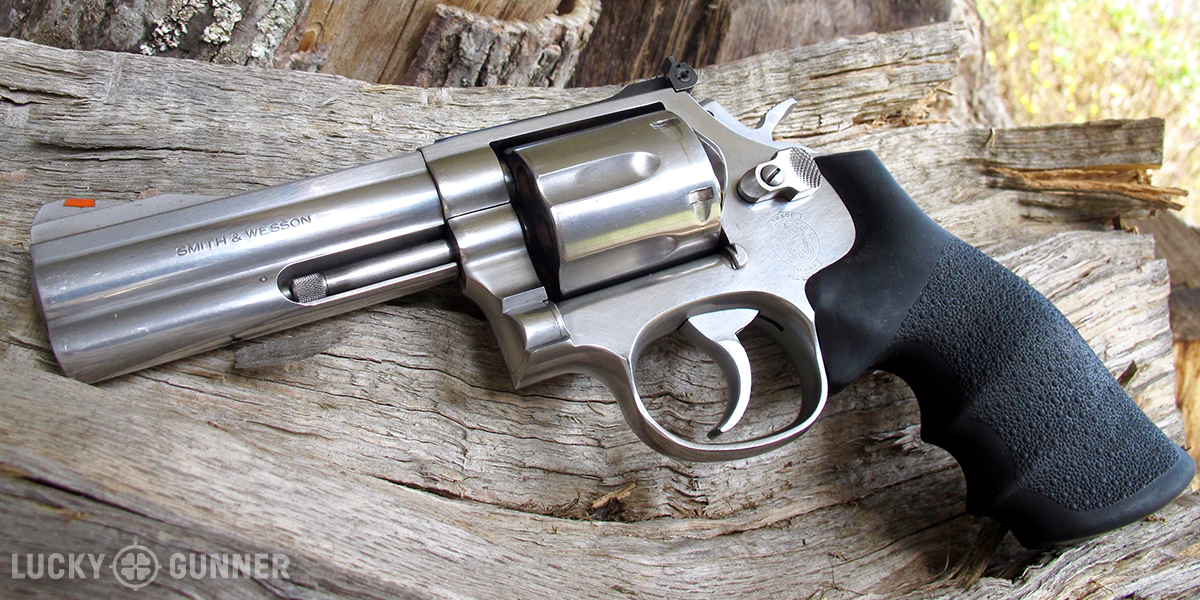 In fairness, I bought this six-gun roughly a decade before this experiment began, and it is the one that will always be in my care. Mine is a 686-3 that I rescued from the bottom shelf of the gun store display case where it was hidden by rows and rows of brand new polymer semi-automatics. I walked away with her for around $350, a song even then. Judging on overall condition, the 4” barrel had seen only a few rounds sent through it, but I quickly fixed that. Though my interest in revolvers has waxed and waned through the years, this gun has always been one of the workhorses in my collection, and I’m on track to put about 5,000 .357 Magnum rounds through it this year alone.

Manufactured in the early-1990s, this model has one conspicuous advantage, and two major disadvantages relative to more modern versions of the same model. The first disadvantage to this gun is its six-shot capacity. While fun for nostalgia’s sake, realistically I would greatly prefer the 16.66% increase in capacity a seven-shooter would convey. The other problem with my 686 is that it’s a square butt which limits my selection of grips. Fortunately, I can live with the look and feel of the Hogue finger grooves. Making these disadvantages totally worth it is the gun’s “pre-lock” status. I am not a fan of the mechanical “benefits” or potential problems with S&W’s internal lock or it’s unsightly, canker-like presence on the otherwise clean side of the elegant L-Frame.

I mentioned compromise earlier and much of the compromise and versatility inherent in the 686 stems from its medium-large L-Frame. The classy, balanced lines of this frame are what drew me to this gun in the first place; they are very pleasing to my eye. More importantly than looks, Smith and Wesson designed this mid-sized frame to be comfortable for all day carry but still strong enough to handle a large ration of full-on .357 Magnum ammunition. Ideal for neither, but good enough for both – compromise. The heft of the gun makes it an accurate and easy shooter with all but the hottest loads, and even with heavy-duty ordnance, it isn’t punishing. 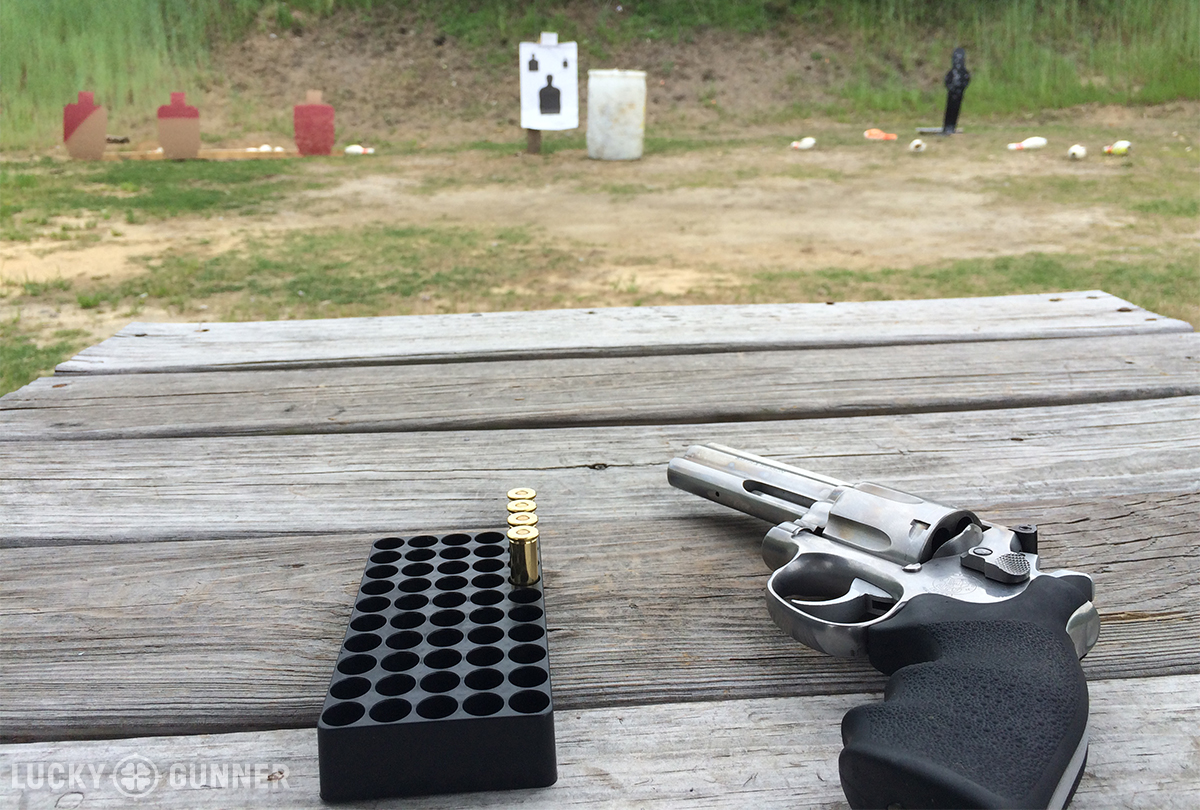 As I said, versatility is the name of the game. Loaded with premium 125-grain hollow point magnums (I like Speer Gold Dots), the S&W 686 is an excellent home defense handgun. Loaded down with .38 Specials, it is a near ideal casual plinker, a fantastic option for introducing new shooters to handguns, and an amply capable small game pot-shooter. Everything else requires a little compromise, however. I’ve worn it in cougar and bear country, loaded up with 180- or 200-grain hard cast lead flat-noses, but a .44 Magnum would certainly be a better option. Concealed carry is a fairly fraught proposition, but I have done it to satisfy my own curiosity. Whitetail deer or hog hunting? It’s possible, though again, a .44 Magnum would usually be a better choice. Considering I don’t hunt and am only rarely on foot in predator country, I feel okay with my choices if they mean owning one or two fewer guns.

Since I carry a gun daily from sunup to sundown, some specialization in this department is required. The bulk and heft of the big 686 are not something I am willing to compromise on that often. When choosing my carry piece, I wanted one of the same caliber and same manual-of-arms as my primary handgun, so I opted for a smaller wheel gun. Which one? This will probably come as no surprise to fans of Wheel Gun Wednesdays, but I carry a Smith and Wesson 640 Pro Series. 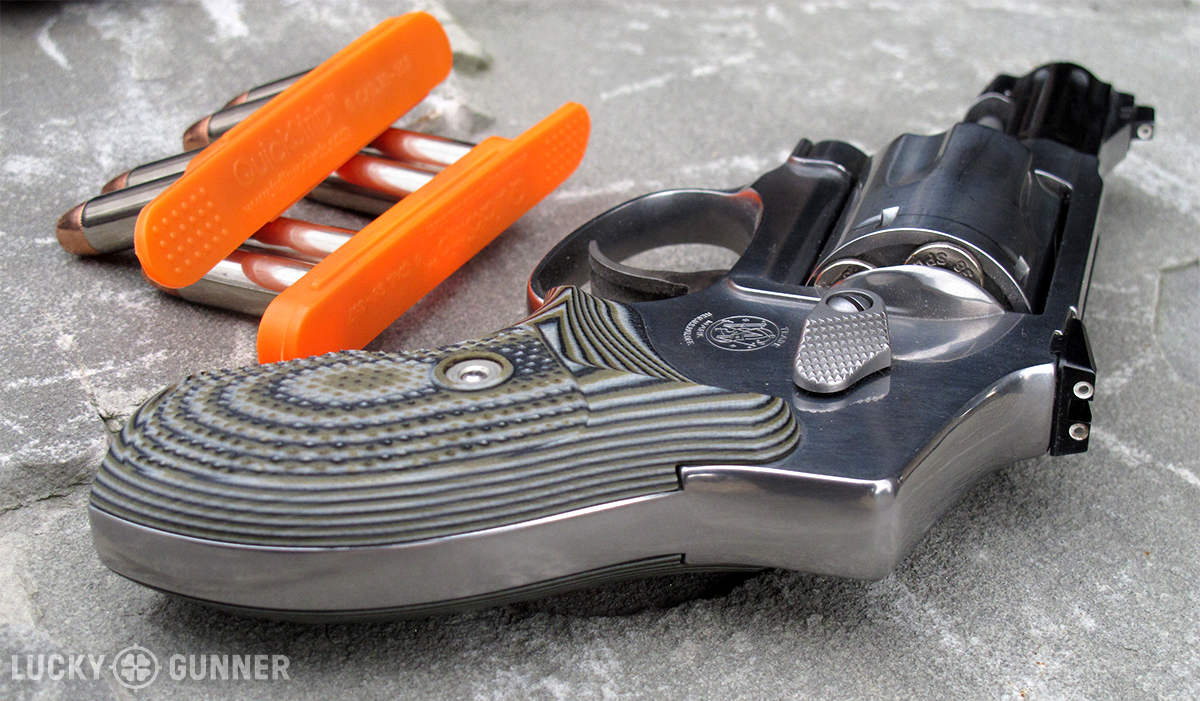 The benefits of this J-Frame .357 Magnum have been written about here before, but I’ll quickly recap some of my favorite features. First and perhaps most important to a fighting handgun, it has very good night sights. Though the three-dot arrangement is not my favorite (I greatly prefer two stacked dots) this is an almost-inestimable upgrade from the sights on most comparably-sized, factory-stock revolvers. This alone was a huge factor in my decision of which revolver to purchase. The other thing about this gun that I absolutely love is the absence of the internal safety and an exposed hammer. The modifications I have made to the 640 are pretty standard: I added a set of VZ grips and an Apex J-Frame Duty/Carry Spring Kit.

There are some other things about the 640 Pro that are interesting but neutral from a practicality standpoint. The cylinder is cut for moon clips, but I don’t use them. They generally aren’t robust enough for daily carry of extra ammunition, and I don’t keep one in the gun. Though it may aid in extraction of empties, it also ties up any unfired rounds in the event I should have to make a tactical reload. I also find the fluted barrel aesthetically pleasing but this seems to be its only purpose.

That is a very short list for a guy that writes about guns. The upside is that I shoot each of my handguns weekly, if not several times per week. I am intimately familiar and incredibly comfortable in my abilities with both. There is little downside currently, though like everyone, I am always on the lookout for the next best thing. Recent events like the unfortunate ones in Paris, San Bernardino, and others have made me wish for something a little larger on my hip. Chris has called 3-inch S&W K-Frames the “Glock 19 of Revolvers” and even chose one as his top pick after his search for the ideal carry revolver. I am currently considering adding a 3” Model 66 to my battery in the near future as well. I would certainly feel more capable with an extra round, a larger grip, the smoother trigger, and the additional barrel length wouldn’t hurt, either.

So why did I choose revolvers? They are reliable, but not necessarily the ultimately reliable guns of modern lore. I have experienced a handful of malfunctions – mostly light strikes – with both of my revolvers (in fairness, they do get shot a lot). They are also extremely limited in capacity. Autoloading handguns should have been the obvious choice for me. I have attended a number training courses (including the Marine Corps’ six-week Force Reconnaissance direct action package) with 1911s and Glocks and have fired a couple hundred thousand rounds through them. I have also launched on scores of combat operations with one of the two strapped to my thigh. 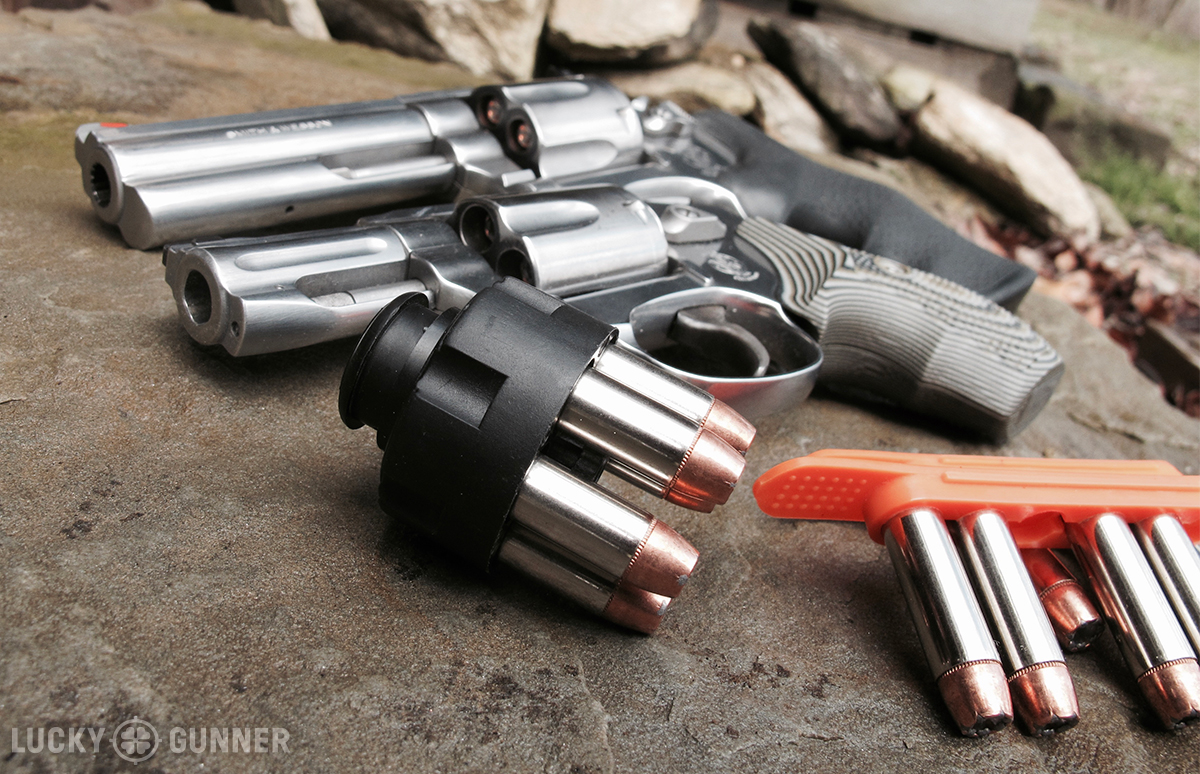 There is also an additional complication to my strategy that was not obvious when I started on this journey. I wanted to get as close as possible to a single, common caliber so I could standardize ammunition. This has proven more difficult than I anticipated. My J-Frame is a monster with full power, 125-grain .357 cartridges, so I load it with .38 Special +P. My home/hotel-room defense gun, the 686, is more than capable of soaking up the recoil these loads generate, so I have to travel with two sets of defense ammunition. By necessity I also stock two different sets of training ammunition. This would very likely not be the case with two 9mm, .40, or .45 handguns, where a single load would probably work acceptably well in both guns. So what factor in my life was so compelling that I chose revolvers, especially in light of their obvious drawbacks, the fact that I have the proverbial 10,000 hours of experience on self-loaders, and it requires me to store more – not less – ammunition?

There is certainly a romantic aspect of revolvers that I simply cannot escape. I grew up reading the writings of Elmer Keith, Skeeter Skelton, and Bill Jordan — men who relied on revolvers to an extent to which few of us today can lay claim. I also grew up in the ’80s when wood and blued or stainless steel was still worn on police duty belts and when a Model 10 and a half box of 158-grain lead semi-wadcutters was considered a pretty solid home defense plan. And if I’m being honest, I absolutely love being known at my local, Thursday-night club match as “the revolver guy.” But there is still a more practical reason I chose revolvers: I travel. 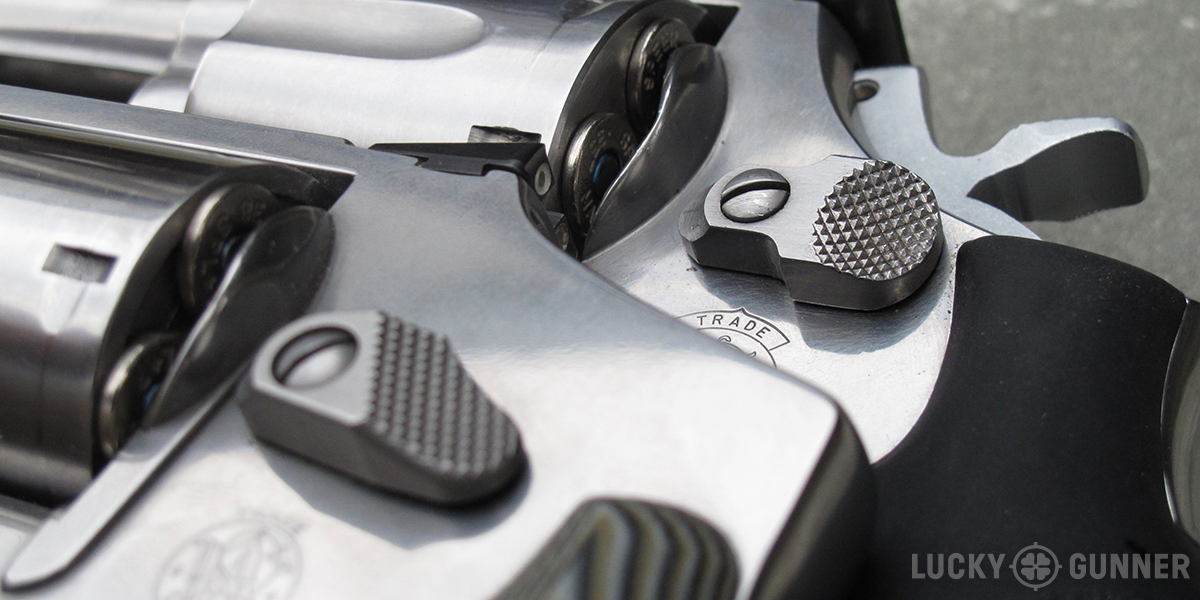 I am a nomad, and almost all of my work is on the road. Lest you doubt me, I sometimes spend 200+ nights per year in hotel rooms. Occasionally my travel involves air transport, but far more often, I manage my own schedule carefully so I can drive from job to job. From Tampa to Boston to Seattle to San Diego, I have to be prepared and able to go anywhere in the continental US. Because of this, I felt it was important to choose firearms that are as broadly legal as possible. Though I can’t carry in all states, I don’t have to worry about running afoul of the law for having a magazine that exceeds a state’s arbitrary capacity limit. I also don’t have to worry about buying and maintaining magazines, which is a nice fringe benefit.

Now let’s hear from you. Am I being foolhardy or overly reductive? Am I leaving anything out? Have you considered doing something similar, and if so, what would you do differently? Be sure to come back next week when I’ll be addressing my approach to long guns.

Throughout our series on defensive shotguns, many of the techniques and tips we've talked about have been geared toward pump-actions. That made...