The Mossberg Shockwave is Mostly Useless

In this review of the 20 gauge version of Mossberg’s shotgun that’s not really a shotgun, we take a look at why the very concept of the Shockwave makes it a lousy choice for personal protection. Details in the video, or scroll down for the full transcript.

When the Mossberg Shockwave was first introduced last year, I thought it looked like a completely useless gimmick. But now that I’ve run a few hundred shells through one, I would like to upgrade its status to mostly useless.

The Shockwave is a Mossberg 590 with a 14-inch barrel and a Raptor birdshead-style grip in place of the shoulder stock. Because of some legal nonsense I won’t bore you with, it’s not legally classified as a short-barreled shotgun by the ATF. So at the federal level, you don’t have to pay any special taxes or fill out extra paperwork to own one, but they are restricted in several states.

The Shockwave comes in 12 gauge or 20 gauge. Shortly after its release, Remington followed with their own version called the Tac-14 based on the Model 870.

This is the 20 gauge Shockwave, which is about 6 ounces lighter than the 12 gauge version. Like any 500-series Mossberg, it has the receiver-mounted safety switch. It’s got a plain bead front sight and a 5-shot magazine tube. And the forend has a fabric strap to help prevent your hand from slipping off and getting in front of the muzzle.

I think these things are pretty goofy, but the appeal is obvious. It’s got the power of a shotgun in a much smaller package that can be stashed in places where a typical long gun doesn’t fit. But the downsides might not be as obvious, especially to someone who hasn’t spent a lot of time behind a shotgun. The big advantage of using a shotgun is its ballistic effectiveness but also, like all long guns, they’re easier to fire accurately than handguns. But the removing shoulder stock negates that advantage. It is now functionally a handgun with horrible ergonomics. 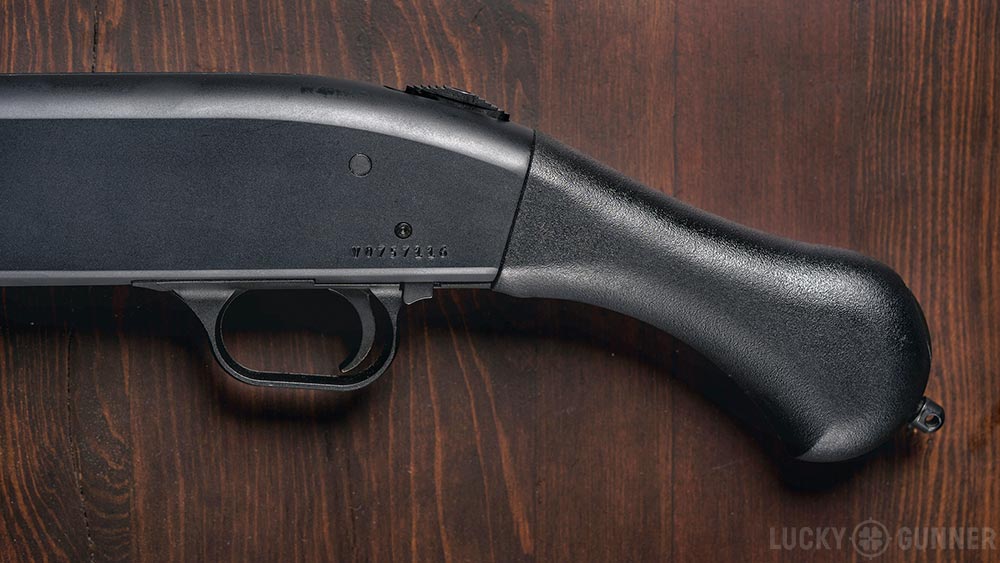 At first, I thought recoil management would be the major challenge of running a gun like this, but that actually turned out to be a pretty small issue compared to aiming the gun effectively.

Without a shoulder stock, you obviously can’t hold this like you would a conventional shotgun. In the owner’s manual, Mossberg tells you to fire it from waist-level. One of the big red safety warnings specifically says not to hold the Shockwave at eye level and try to sight down the barrel. So they give you a bead sight, but I guess that’s just for decoration.

Most of you probably already know that the old myth that you can’t miss with a shotgun is complete nonsense. To guarantee an effective, fight-stopping hit on a violent attacker, you have to aim — even at hallway distance with a shotgun. That’s really tough to do when you’re firing from the hip.

I tried this on a few different trips to the range and I found that after 10 or 15 rounds, I could find the sweet spot and more or less keep all the pellets in the center of the target at 5 yards. But if I tried just picking up the gun and shooting it cold, or if the target was set up at an angle, or if I started with my back to the target, things didn’t always go so well. 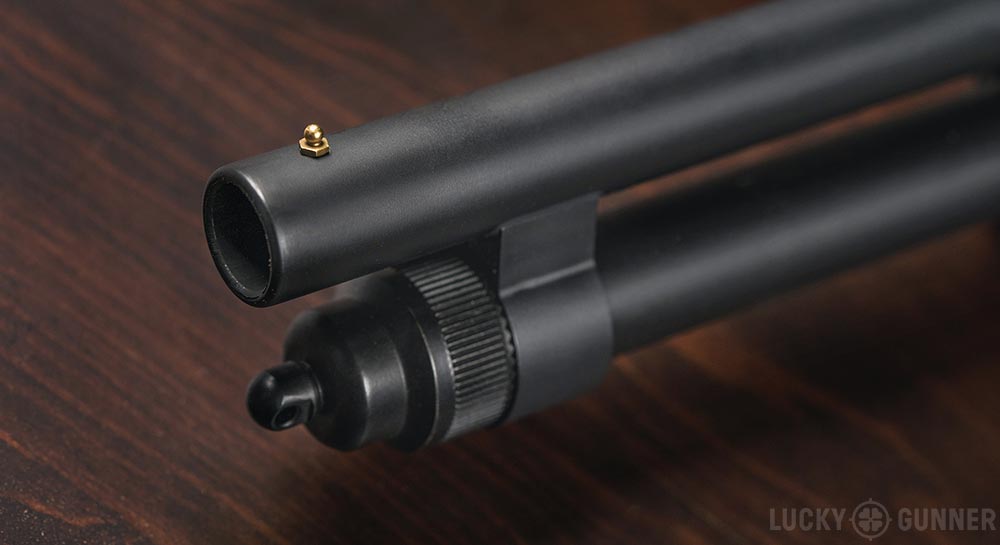 So I don’t think hip firing is a great idea if the target is beyond about two arm lengths. You just can’t be sure of where the muzzle is pointed when it’s down at hip level unless you have put a ton of time into mastering that specific skill.

Personally, I had much better success doing exactly what Mossberg says not to do and holding the gun up at eye level. Starting from a low ready position, it wasn’t any slower than shooting from the hip, but I had a much better chance of getting a good hit with my first shot.

I’m pretty sure the reason Mossberg doesn’t want you doing it this way is because if you hold the gun too close to your face, the recoil is going to make you punch yourself in the nose, so… don’t do that. I extend my support arm out almost completely and that helps keep my firing hand away from my face.

The other key to this is to use the push-pull technique popularized by the instructor Rob Haught for controlling shotgun recoil. Just before I press the trigger, I aggressively push out with my support arm and pull in toward me with my firing hand and that minimizes the movement of the gun. This might not work for everybody because without a shoulder stock, the push-pull technique is almost completely dependent on upper-body strength. Grip strength and maybe even arm length are going to play a part, too. So if you want to try this, you might consider practicing the push-pull technique with the gun at hip level or chest level before you put it in front of your face. 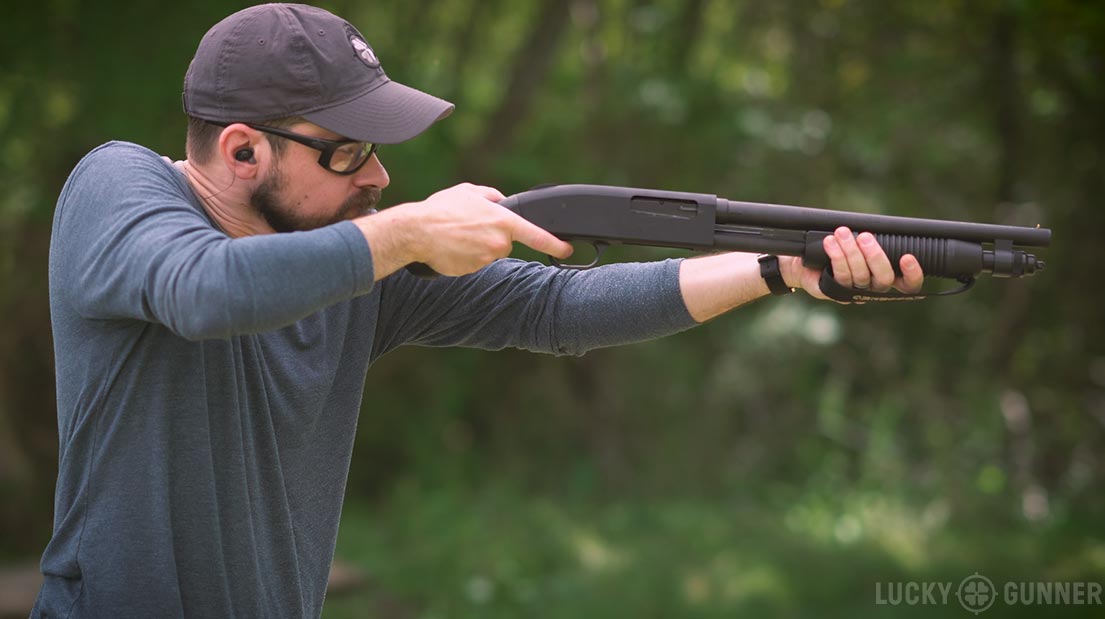 Even with the gun up at eye level, we’re still just making the best of a bad situation. There is no easy way to aim a shotgun that’s pretending to be a handgun. A bead sight works pretty well when you’ve got a shoulder stock. If your technique is halfway decent, every time you mount the shotgun, it’s going to be basically pointed at whatever you’re looking at. The bead is just there to confirm and to help make small corrections.

Without the shoulder stock, you lose the two points of contact that keep your eye in line with the muzzle. And unlike shooting a handgun, your hands are holding separate parts of the gun. So if your support hand is not in a straight line with your firing hand and your eye, you’re going to be off target. And each time you fire and run the action, you have to line everything up again.

I tried mounting a Trijicon RMR to the Shockwave to see if that would improve its shootability. My accuracy was a little more consistent, especially on follow-up shots, but I wasn’t any faster. I do think the red dot would offer a huge advantage over the bead in low light, but not so much outside in the middle of the afternoon.

I should also mention a pretty serious reliability issue I ran into. John Johnston was the first to experience this when he was with me at the range the other day. If you run the action hard enough, the safety switch will self-engage — it will move halfway into the safe position, and that’s enough to block the trigger and prevent the next round from firing. This issue is not all that uncommon with the 500 series and it’s one of the known weaknesses of the Mossberg safety. Supposedly it can be fixed by replacing the plastic factory safety with a metal aftermarket safety, but I have not confirmed this myself.

I’ve been pretty harsh on the Shockwave, but like I said at the beginning, I don’t think it’s completely useless. The one thing this is really good for is a gateway to a legal short barreled shotgun. You can pick up one of these, pay the $200 tax stamp, and then a few months later, install a real stock and you’ve got a basic, but very handy home defense shotgun for right at $600. Maybe a few bucks more if you want to fix the safety.

If the Shockwave is all I had access to for some reason, I could probably make it work for me as an adequate self-defense tool. But I’m also really comfortable with shotguns in general, and that goes a long way toward figuring out how to run the Shockwave. Even so, I can’t think of any plausible situation where I’d rather have a Shockwave or a Remington Tac-14 instead of either a full-size handgun or a proper shotgun with a shoulder stock.

Five yards. Four strings of fire. Ten rounds total. This quick and challenging shooting exercise is a great way to...