Up front, in all their glory, with factory oil oozing from their slides, are the new pistols at my local gun store. Not a scratch on them. Carefully handled, placed on little mats when a customer wants to see them, wiped down so fingerprints won’t show. Gleaming. And off to the side, in the dark corner over by the clearance holster bin lie the used and consignment pistols. Holster wear glinting where the finish has worn off. Scratched up on the frame where the previous owner forced the slide stop in with no finesse. The little tags tied to their trigger guards plead desperately, “Comes with 4 hi-cap mags and holster!” The used gun section is usually ignored by most customers, but, for me, its like one of those heart wrenching ASPCA commercials with the starving puppies. “Once trusted to keep their owners alive, these pistols now sit forlorn and alone, with little hope of rescue. Won’t you give one a loving home today?” Some of you think I’m insane for thinking that way. Some of you know exactly what I mean.

I’m a fan of the used gun section because there’s value to be had there. Extras, like spare mags and holsters thrown in as a package deal, don’t really increase the value of a used gun very much, so you get them at a huge discount compared to purchasing them separately. There’s often wiggle room to haggle on these guns, and their prices are lower simply because you aren’t the first owner, even though they usually have fairly low round counts. Let me tell you a secret– nobody but professional shooters actually shoots enough to wear out a modern pistol. At most, if you buy a high round count gun, you’ll want to swap out some springs for fresh ones. In general, the used guns are a great value, and there’s one type in particular that I think you should be paying closer attention to.

You probably looked right at them without really seeing them. There they are, the dusty, old school Smith & Wesson automatics, the ones with the slide mounted safety/decockers and exposed hammers. There’s a 5903, its anodized aluminum frame yellowed with age. There’s a 4006 with a lot of holster wear on the high spots–that one was a cop gun, I bet. Oh, there’s an old 645 from the 1980s, a 5-inch barreled .45acp beast with a funny looking oversize trigger guard. Sure, they’re cheap enough, but why should we care about them? They don’t have tactical rails, 18 round magazines, threaded barrels, or built-in optics mounts. They just aren’t cool, right? They’re outdated.

Look at it this way. Let’s say I approached Smith and Wesson and said hey, I’m looking for a pistol that’s easy to learn, safe to operate, has great recoil control, and is durable enough to last the rest of my life without breaking. No plastic frame please, I want it to be all stainless steel. Make the magazine out of stainless, too, because I hate rust. I want a big slide stop, easy to reach, that can be used to release the slide over and over again without wearing out. I want a manual safety that’s not just easy to use, but also easy to see at a glance whether its engaged or not. Can you build that for me? Smith and Wesson would reply that they have such a gun. Their stainless 1911 series starts out at $979.00 MSRP and they would be happy to sell me one. That’s right, its a thousand dollar pistol.

Can you see where I’m going with this yet? As I write this article, there are excellent condition .45acp S&W traditional double action pistols sitting on auction sites at $400-$550 with no bids and no reserve.  Third generation S&W 9mm and .40 S&W pistols frequently sell for under $400 when a surplus dealer gets in a batch of police trade-ins. Older 9mms like the 39s and 439s can be had for under $300, especially if they have a rough finish or an unpopular finish like nickel plating. There’s an unissued 5906 in mint condition getting no love for $400. That’s significantly less than a Bersa Thunder Pro. That’s significantly less than a Lionheart LH9, which is a Korean made copy of the 5906 that uses the exact same magazines. Is there no justice? 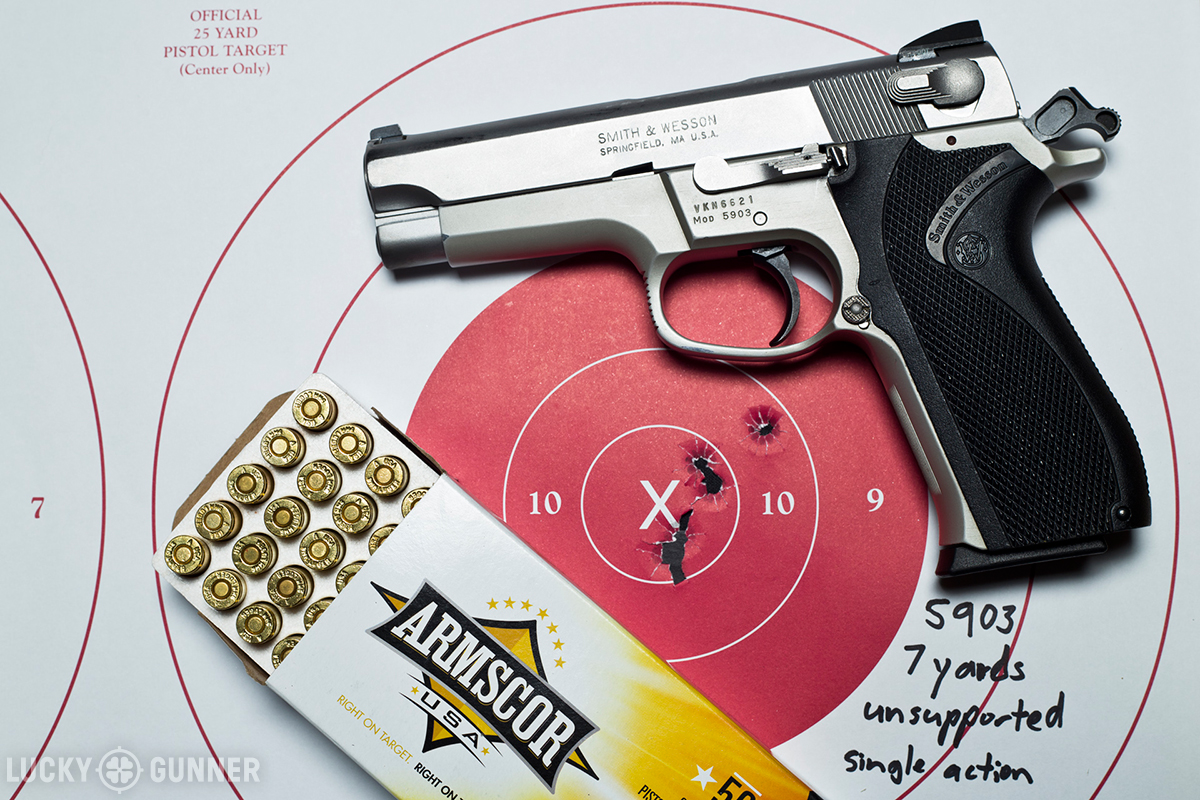 I know why these guns aren’t more popular. Their design elements fly in the face of some of today’s most popular trends in pistol design. Right now it seems everyone wants a small, polymer framed gun that’s as light and narrow as possible, not a heavy, all stainless behemoth. An empty Glock 43 weighs in around 17 ounces; an empty 5906 weighs more than twice as much at 38 ounces. Shooters want striker fired triggers to the extent that even HK and Beretta are making striker fired guns with trigger pulls that are the same every time. The traditional double action/single action design of the old S&W guns is definitely out of style.

If you want a dependable pistol on the super cheap, the double action only variants are totally unloved (there’s a 4043 on Gunbroker right now for $225 with no bids, ouch). And the slide mounted safety, once touted as a military-specification feature comparable to the Beretta 92, is now disliked in both S&W and Beretta flavors. These guns were in high fashion when Miami Vice was rocking late night TV with a white Ferrari Testarossa and synthesized music. Now, their features list looks just as out of date as a pastel shirt underneath a grey sport coat. I admit it. Finally, I’ll admit something else–these guns aren’t match grade accurate. If you’re looking to put five slow fire, bench rested rounds through the same hole and impress your friends at the shooting range, keep saving your money up for that match gun.

So yeah, these pistols aren’t for everyone. They have their knocks, their reasons for being so cheap. But in the realm of cheap guns in the same price range, there are a lot of other pistols that are cheap because they break, because they are unreliable, because there aren’t any spare parts and the company that built them is out of business. None of those accusations hold for the old Smith & Wessons. And the list of older features I detailed above contains no real deal breakers for me. I think they make an excellent nightstand gun for shooters who prefer a hand held light to a weapon-mounted light. Regarding the trigger pull, I’ve been shooting DA/SA actions for years now, and its second nature to me.

To show off just a bit, I shot a five shot group at 7 yards in double action only, decocking my 5906 between each shot. With a quick but deliberate pull, no super-slow stacking of the trigger, there you have my results. A double action trigger pull is not a “guaranteed miss” like the gun store story tellers always claim. Spend less time listening to those blowhards and more time learning how to pull a trigger properly. If you have any time to spare at all, the hammer can be cocked back manually to single action in an instant anyway, and the single action weight and trigger reset is great on these guns. If you just don’t have the grip strength to pull the double action smoothly, Wolff Gunsprings sells reduced power mainsprings that will make things much easier and still reliably ignite high quality ammunition. Finally, these guns are really safe for new shooters to learn on because of that big safety/decocker. Even as an experienced shooter, I appreciate the added safety margin while reholstering these guns.

If someone comes to me and says “I have $400 to buy my first pistol and I need to trust it with my life,” I’ll show them one of these old Smiths and tell them that thousands of cops trusted them for year after year back in the day. They are safe to operate, reliable, more accurate than most of their owners can shoot, and all that extra weight means less felt recoil, so you aren’t as likely to develop that nasty new-shooter flinch. Like old school revolvers, these are smooth guns that can last a lifetime. The best praise I can give to these old workhorses is how my shooting buddies reacted when I told them I was going to write this article. They all want to keep collecting these pistols on the cheap, so none of them wanted me to write this one and tell you what a bargain they are!

Editor’s Note: If all these old S&W model numbers are confusing, you’re not alone! Check out the handy chart in our Guide to 1st-3rd Gen S&W Semi-Autos for some help.
–CB