Why Blank Ammo Can Be Deadly

Today, we’re looking at how blank ammunition works, why it’s dangerous, and what part blanks played in three separate gun-related deaths in the entertainment industry. We even recreate the bizarre and unlikely circumstances that led to the death of Brandon Lee in 1993. What happens when you fire a blank with a squib stuck in the barrel? We tried it with ballistic gel to find out.

Watch the details in the video below, or scroll down to read the full transcript.

Hey everybody, I am Chris Baker from LuckyGunner.com where you can get all the ammo you need with lightning fast shipping.

It’s been a few weeks since a cinematographer was shot and killed on the set of the Alec Baldwin movie “Rust.” That incident has brought a lot of attention to the question of whether the entertainment industry should continue to use real firearms with blank ammo in movie and tv productions. I don’t work in that industry and I can’t answer that question. But I’ve noticed there seem to be a lot of misconceptions, both among the general public as well as among gun owners, about what blank ammunition actually is and why blanks and the guns that fire them still have the potential to be dangerous. That’s what I want to try to help clear up today.

What is Blank Ammo?

First, let’s take a look at how blank ammo works. There are several different types of blanks. They all have essentially the same components as live ammo except there is no bullet. Normally, a round of ammunition has four parts: a cartridge case with a bullet on top, a primer on the bottom, and propellant or gunpowder inside. When you pull the trigger, the firing pin strikes the primer, which has a very small amount of explosive compound in it. That ignites the gunpowder and creates hot gas that’s now under tremendous pressure. That pressurized gas forces the bullet out of the case and down the barrel of the gun. 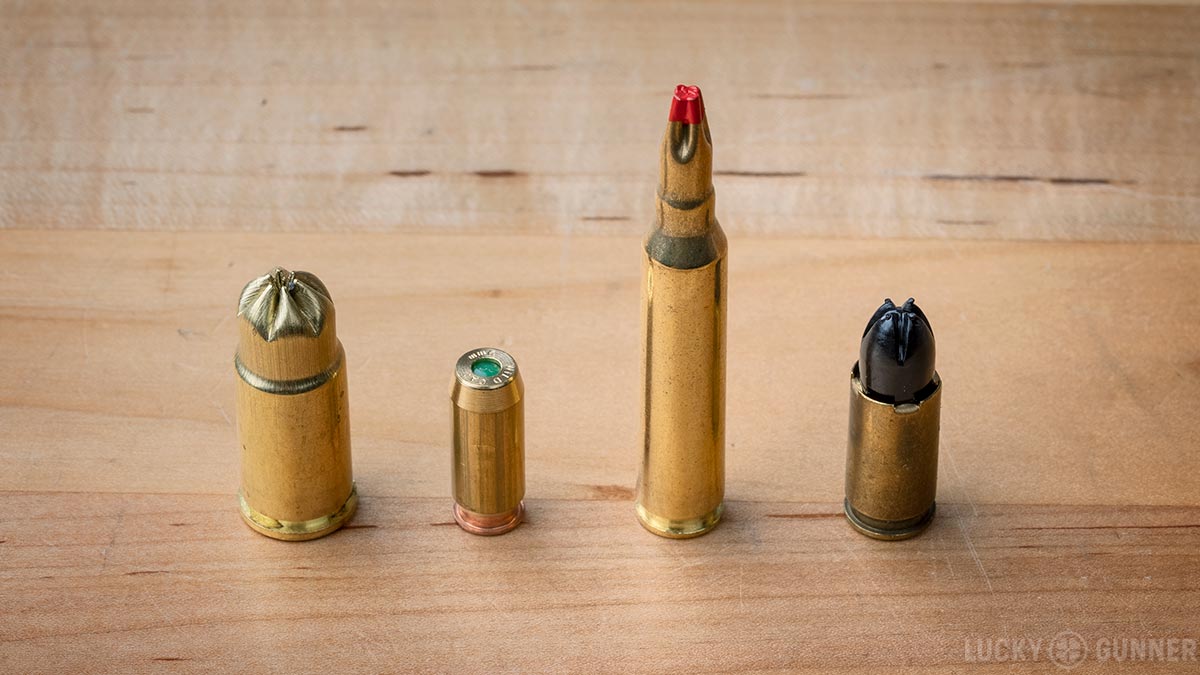 With a blank round, you still see a flash from the burning gunpowder and there’s still a noise, but there’s no projectile. Since there’s no bullet to keep the powder from spilling out of the case, blanks sometimes have a piece of plastic, wax, or other material to hold everything in place, or instead, the case may be crimped.

Obviously, using blanks is a lot safer for the entertainment industry than live ammo, but there is still some risk involved. Just like a live round, the burning powder in a blank creates a lot of hot gas that exits the barrel at high velocity. That gas might also be combined with little bits of unburned gunpowder or other filler material. If you’re too close to the muzzle when a blank is fired, that stuff could easily cause an injury.

At contact distance, the concussion from the hot gas could even be fatal. That’s what happened to the actor Jon-Erik Hexum in 1984. During some down time on the set, he was playing around with a very real .44 Magnum revolver they had for a prop. As a joke, he pressed the barrel against his head and pulled the trigger. The blast from a blank round caused a skull fracture. He died in the hospital a few days later.

So blanks don’t completely eliminate the risk of injury from what’s coming out of the barrel. That’s the most obvious danger. The bigger danger comes from the fact that a lot of blanks are fired out of real guns.

This is a replica blank-firing gun. It’s made to look like a Beretta Model 92, but it is incapable of loading or firing real ammo. It fires these special blank cartridges that only work in replica blank pistols. 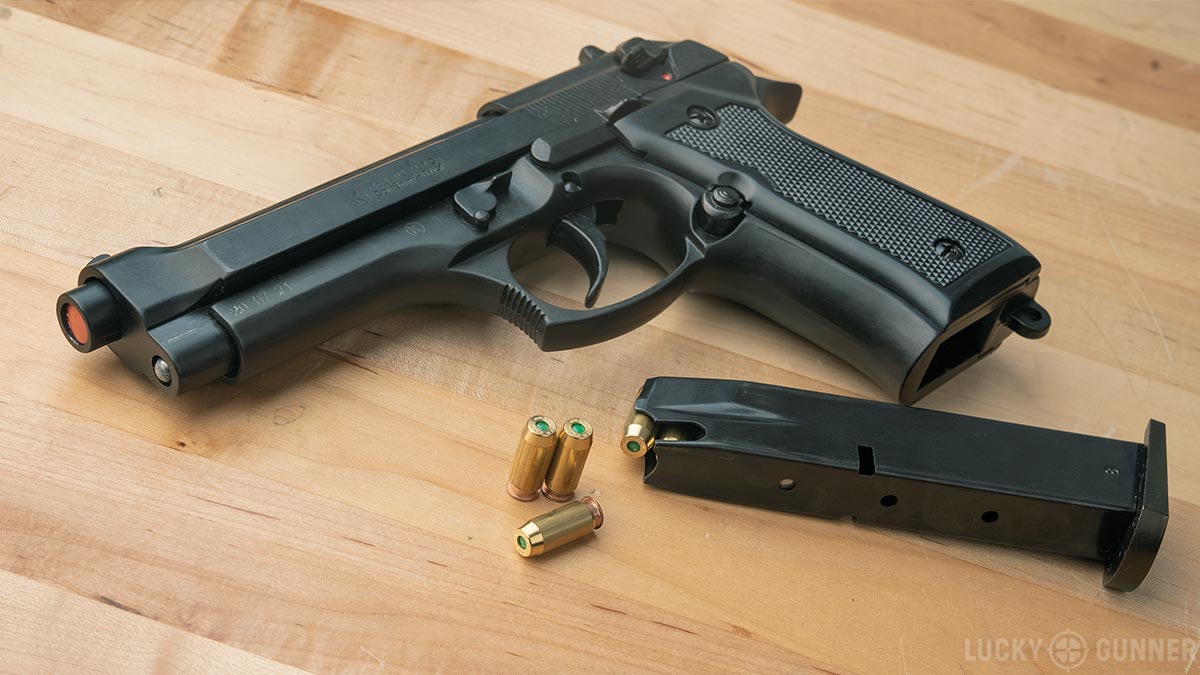 For whatever reasons, apparently it’s not feasible to use these replica pistols in every production. So instead, they often use real unmodified firearms with blank ammo. I’m not questioning that decision — I’m sure they have good reasons for that. But the presence of real firearms does open the door for fatal mistakes to be made if people get careless.

That’s why a general rule of thumb for anyone working with blanks is that blanks and live ammo should never be in the same place at the same time. As I understand it, the entertainment industry takes it a step further. Live ammo is typically never allowed on a set at any time, period.

Based on what’s been reported in the Alec Balwin case so far, there are multiple explanations as to how live ammo ended up in the gun. Baldwin had a reproduction 1873 .45 Colt revolver very similar to this one. Multiple people handled the gun and they each should have cleared it to make sure it was not loaded. Apparently, none of them did. When Baldwin was practicing with the gun between takes, he fired a live round that killed Halyna Hutchins.

Clearing a gun like this is not difficult. If I load this blank cartridge in here, the rim is easily visible just by looking at the side of the gun.

To properly clear it, you open the loading gate, pull the hammer back to half cock, and rotate the cylinder to make sure all six chambers are empty. It takes less than 10 seconds.

The Strange Case of Brandon Lee

Someday, we might eventually get the full story on why nobody noticed that a live round was in that gun. For now, I want to look at a similar incident from another movie set where we do have a good idea of what happened. In 1993, Brandon Lee was killed while filming the movie “The Crow.”

The trouble on that set also started with live ammo showing up where it wasn’t supposed to. A production assistant brought in a box of live .44 Magnum shells to use as a background prop. The propmaster found it and flipped out and put the ammo in the trunk of his car for safekeeping.

A couple of weeks later, they were shooting a scene that called for some dummy rounds. Dummy rounds are just cartridges that are completely inert. There’s no powder or primer or anything that can go “bang.” If you need to show an actor loading a gun or something like that, you would use dummy rounds. In this scene, they used a Smith & Wesson .44 Magnum revolver. I suspect the director wanted a closeup where the camera could see the tips of the bullets in the cylinder.

They didn’t have any dummy rounds available on the set of “The Crow.” So they got the special effects guys to make some dummies using the live ammo the propmaster had confiscated earlier.

The cheap and easy way to do this (which is probably what they did) would be to remove the bullets and dump out the powder and then load the primed cases in the gun and fire them off. Then you would put the bullets back in the empty cases with the spent primers.

You can distinguish a homemade dummy from a live round because spent primers have a distinctive dimple while live primers are smooth. On the set of “The Crow,” whoever made the dummy rounds did not fire off all of the primers. There was at least one dummy round that had a live primer in it. 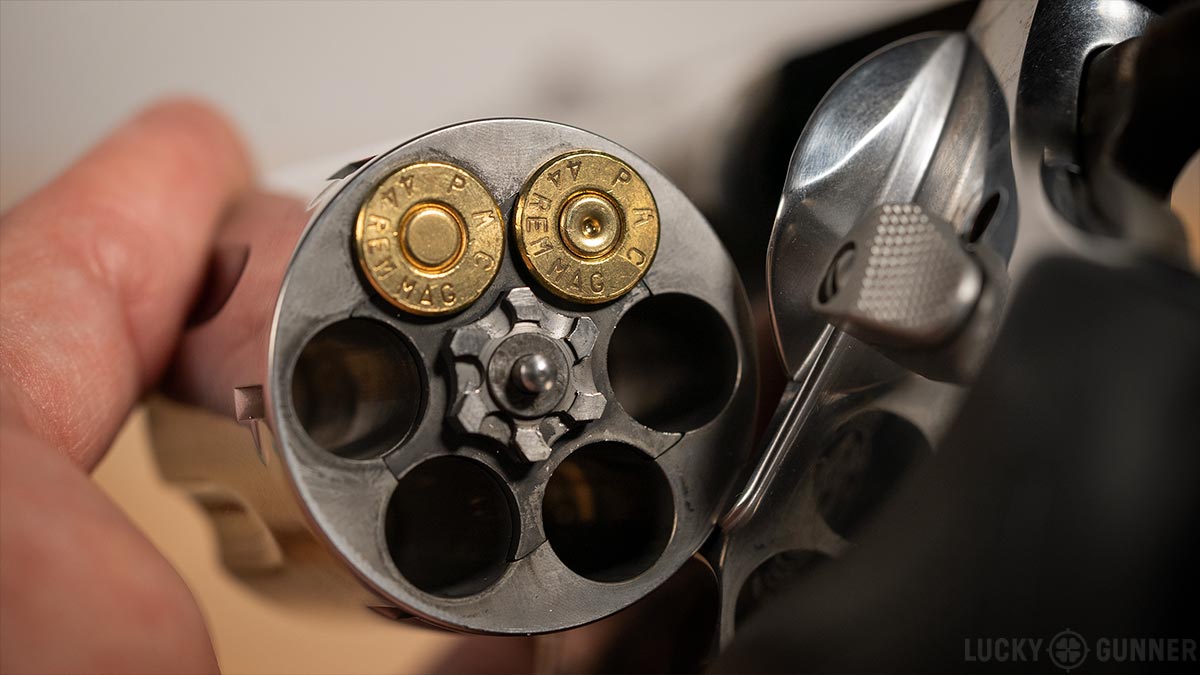 Whoever was supposed to check the gun on set did not notice the live primer. At some point when they were filming the scene with the dummy rounds, the trigger was pulled. There was a popping sound, but nobody paid much attention to it. That was the sound of a primer going off. It had just enough force to push the bullet out of the case and get stuck in the barrel. That’s called a squib and it’s really dangerous if it goes unnoticed.

After another couple of weeks, they were filming a scene where Brandon Lee was facing an armed bad guy. They used the same .44 Magnum revolver. The squib was still stuck in the barrel, but nobody thought to check the barrel for obstructions.

They loaded the gun with blanks and gave it to the actor playing the bad guy. He was supposed to point the gun off to the side, and not directly at Brandon Lee, who was about 10 or 15 feet away. But he either flinched in anticipation of the noise, or, like a lot of untrained shooters, he inadvertently steered the gun off target with his trigger finger as he was pulling the trigger. When the gun discharged, the muzzle was aimed right at Lee.

The blank forced the bullet out of the barrel and hit Brandon Lee in the abdomen. Within a few hours, he died from internal bleeding.

From what I understand, it took investigators quite a while to piece all of this together and figure out what exactly happened. Some people still believe it was a conspiracy and there was some kind of foul play involved. We decided to recreate the circumstances and test the plausibility of the squib load theory.

First, we removed the powder from a .44 Magnum cartridge and then loaded the bullet back into the primed case. Sure enough, the detonation of the primer alone pushed the bullet into the barrel where it got stuck. 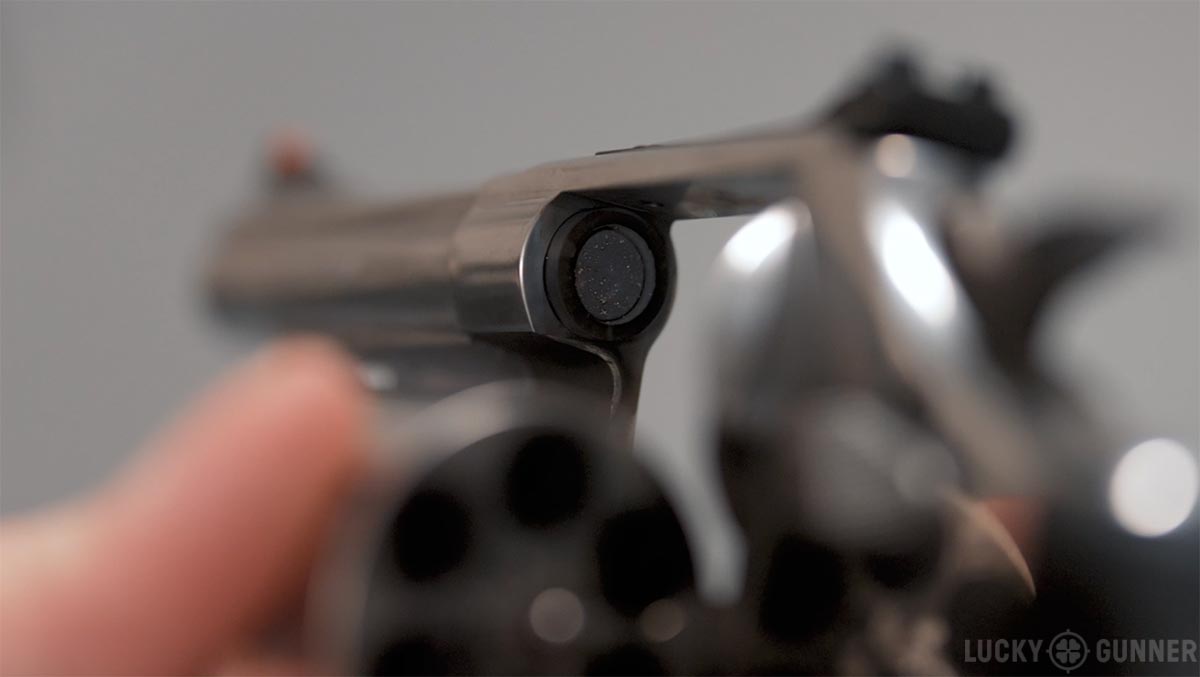 Then I loaded the gun with a .44 magnum blank cartridge and fired it at some ballistic gelatin about 10 feet away. The blank forced the squib out of the barrel at 518 feet per second. It sailed through the first block of gelatin and stopped near the end of the second block. That’s 29 inches of penetration.

For testing duty ammo, the FBI considers 12 to 18 inches to be ideal. So 29 is more than enough to be lethal. It was moving a bit less than half the velocity of a live round. But a big bullet like this doesn’t have to be moving super fast to do some real damage.

A Series of Negligent Events

The circumstances might seem unlikely, but the death of Brandon Lee was not a freak accident. It was the result of a series of careless mistakes followed by failures to correct those mistakes. The same thing happened on the set of “Rust.” The live round should not have been there to begin with, but multiple people had the opportunity to catch that mistake and they didn’t.

I’m sure we could all come up with plenty of criticisms for Hollywood in general, but it looks like the gun handling protocols they have in place usually work really well. When you consider just how many movies and TV shows feature firearms, it’s really impressive that there are so few gun-related fatalities. Dozens of people have died as a result of various accidents or negligence on movie sets. But in the last forty years, only three of those incidents involved firearms.

I don’t know what, if any, changes need to be made in Hollywood. But these incidents can serve as good reminders for all of us who own and use firearms. Sometimes it’s inconvenient and even obnoxious to strictly follow the basic rules of gun safety. But those rules work.

I hope you guys found this helpful. If you’ve got an idea for a topic you’d like me to tackle in a future video, leave a comment below. Or you can always get in touch using our contact form.

You've been asking for it for years, so we finally reviewed the classic Makarov pistol. Is it just a Russian...