We’re kicking off 2018 with a look at the Beretta Px4 Compact Carry — a gun that’s been the subject of more review-requests than almost any other since we first launched the Lounge. I mentioned this gun when it was first announced at SHOT Show 2015, and again when I reviewed the standard Beretta Px4 Compact. The guns first started shipping around the beginning of last year, but they sold out so quickly that Beretta wasn’t able to send us a sample to review. Since it is so similar to the Compact that I already reviewed, I didn’t think there would be much demand for me to review the new one, so I more or less forgot about it. Well, I was wrong. Apparently, you guys really do want a review of the Compact Carry. And you told me as much. A lot.

Fortunately for you, a few months ago, I made the decision to go “all in” with the Px4 Compact for the foreseeable future and consider it my go-to pistol for training, carry, home defense, and whatever else I need to do with a pistol (that’s not to say I won’t be reviewing other guns for the Lounge!). So, like I explained in the last post of 2017, I bought a Px4 Compact Carry to… well, carry, and the original Compact has been relegated to range-only use. After a couple of minor modifications and a thousand-ish rounds to verify function and reliability, the Px4 Compact Carry finally gets its own review. Details in the video below, or scroll on down to read the full transcript.

If you’re like me, then maybe you fall into that obscure intersection of shooters who prefer traditional double action pistols, but who also appreciate lightweight polymer carry guns with modern features. For people with such… sophisticated preferences, I think one of the best options available is the Beretta Px4 Storm Compact Carry.

When I reviewed the original PX4 Compact 9mm a year and a half ago, I was really impressed with Beretta’s factory aftermarket support for this gun. You can customize all of the controls and even change the internals with parts available directly from Beretta. The vanilla Px4 Compact is a good pistol right out of the box, but most shooters who are really serious about training and concealed carry are probably going to find a few things they would want to change. So early last year, Beretta answered that demand when they introduced the PX4 Compact Carry. 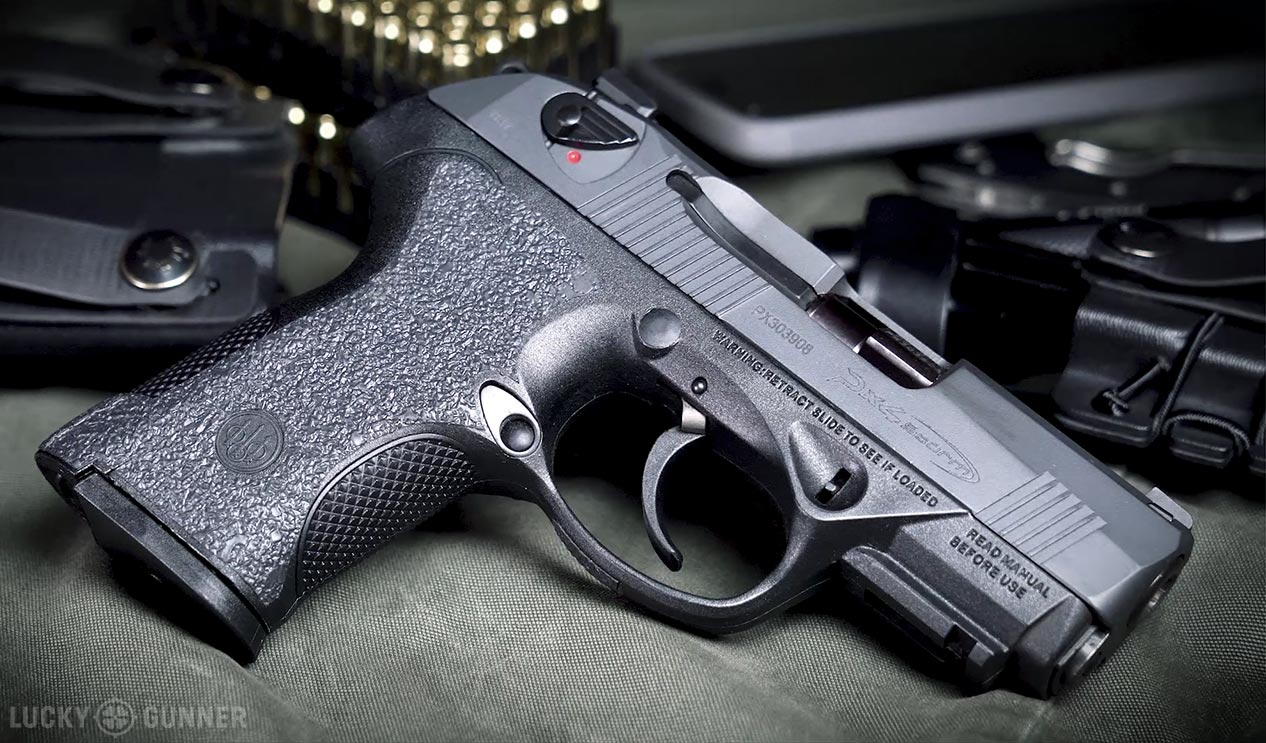 This variant is the brainchild of shooting instructor and Beretta consultant Ernest Langdon. Based on his recommendations, the Px4 Compact Carry takes advantage of some of the existing parts from Beretta’s catalog to improve the gun’s overall ergonomics and concealability. The wide ambidextrous slide-mounted safety levers have been replaced with low-profile “stealth” decock-only levers that sit nearly flush with the slide. Instead of a large ambi slide catch lever, it has a narrower left-side only lever. And in addition to the small magazine release found on the original Px4 Compact, the Compact Carry also comes with a medium and a large mag release, which can be installed for right or left-handed use. Inside the gun, you’ll find the Beretta competition trigger group installed, which reduces the weight of the single action trigger from about 5 pounds to 4 pounds.

The only non-Beretta parts on this variant are the Ameriglo sights which include a bright orange front sight with a tritium insert and plain black rear sight. In the box with the pistol, you also get a set of Talon grip decals which you can apply to improve the gun’s grip texture. To distinguish the Compact Carry from the original, the slide has a Cerakote Sniper Grey finish, and in case you had any doubts about the overall value of this package, Beretta includes a third 15-round magazine. 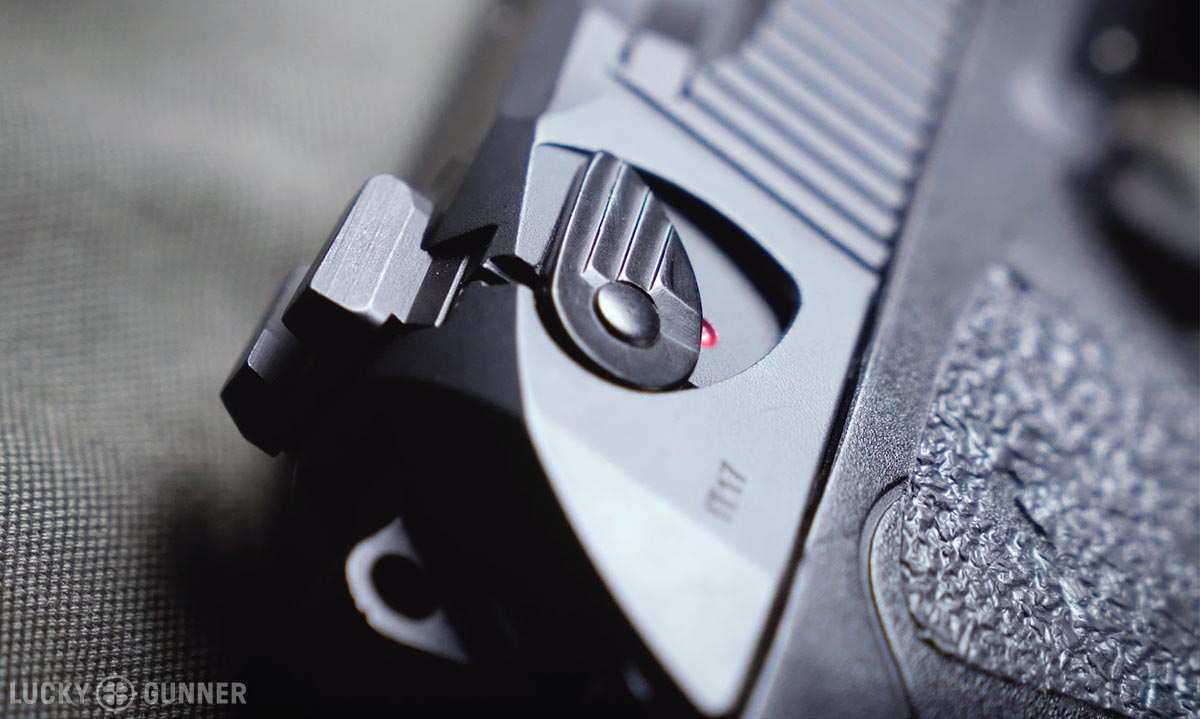 This is not just a review gun for me. This is actually the gun that I carry almost every day. I carried the Compact for several months back when I first reviewed it and then I came back to it this past summer. Now I’m using the Compact as my dedicated training gun that gets used and abused and the Compact Carry is what I actually wear on my belt every day and it only gets fired occasionally.

I’ve got two holsters I really like for this gun. One is the Wing Claw 2.5 from JM Custom Kydex and the other is The Keeper from Keeper’s Concealment. Both of them are really good, but the Keeper gives me a slightly quicker drawstroke while the JM Custom prints a little less at the belt line.

If you saw my Px4 Compact review, you might have noticed that minus the Cerakote finish, I already had my Compact set up with pretty much the same modifications the Compact Carry comes with, and I can tell you, it’s much cheaper to start with the Compact Carry than to buy all of those parts individually. 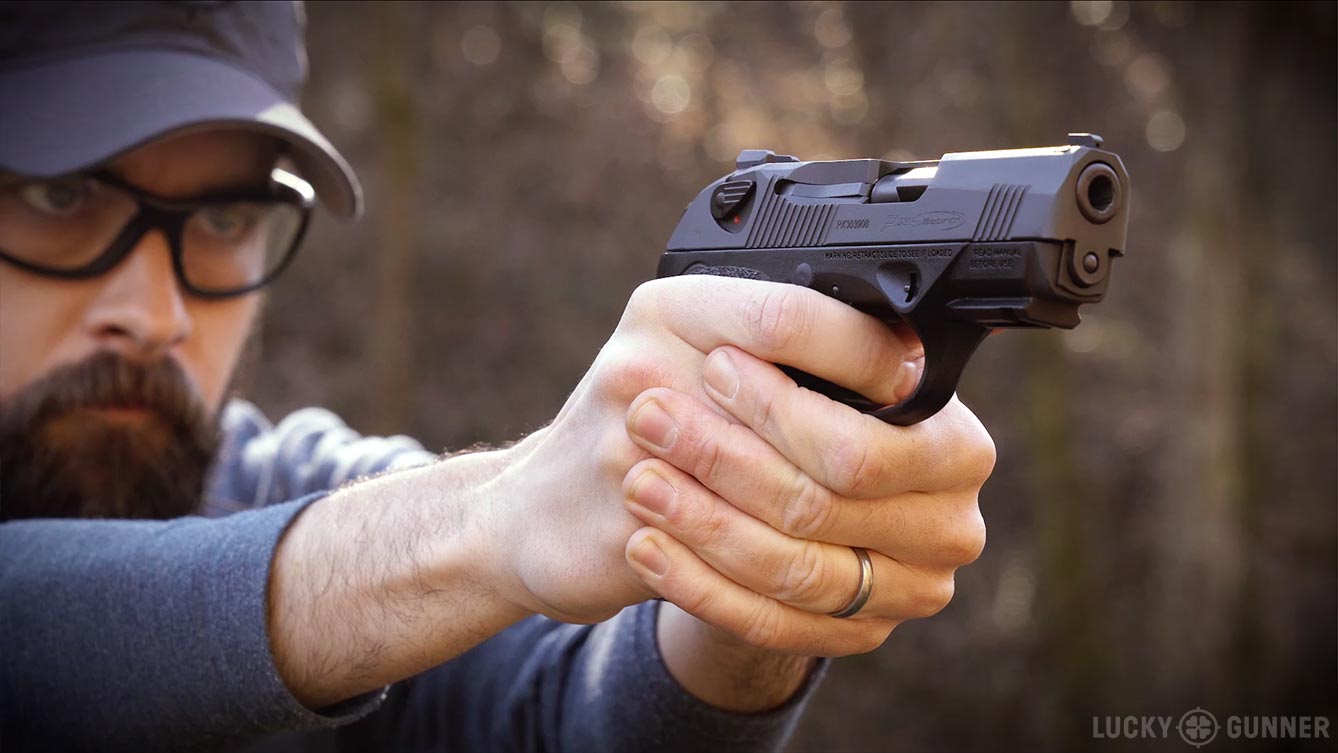 I’ve also made a few extra changes of my own to the Compact Carry which, again, mirror what I did to my Compact. The most important is the decock lever. I appreciate the idea of the low-profile levers. The original levers are big with sharp edges that are really no fun if you use an overhand grip to rack the slide. But the stealth levers are just too flat to operate with my thumb unless I shift the grip in my hand. So I left the stealth lever on the right side and on the left side, I’ve got a 92-style lever that Beretta makes for the Px4. It makes decocking easier, but it’s not sharp like the standard levers.

The competition trigger group really only impacts the trigger in single action. To lower the weight of the double action trigger from 10 pounds to about 8 pounds, I installed the Beretta D-series hammer spring. Like a lot of shooters, I have trouble reaching the small mag release button, so I’ve been taking advantage of the optional medium and large buttons. But with both of those, the sharp edge of the mag release will dig right into the web of my support hand, so I just round it off with some sandpaper and now I don’t even notice it’s there until I need it.

If there was only one other thing I could change about this gun, it would be the grip texture. It’s just way too smooth and slippery. The Talon grip decals help with that, but the rubbery texture is not the same as if the frame itself was textured. That might not seem like a big deal, but I’ll tell you where I’ve noticed a difference. 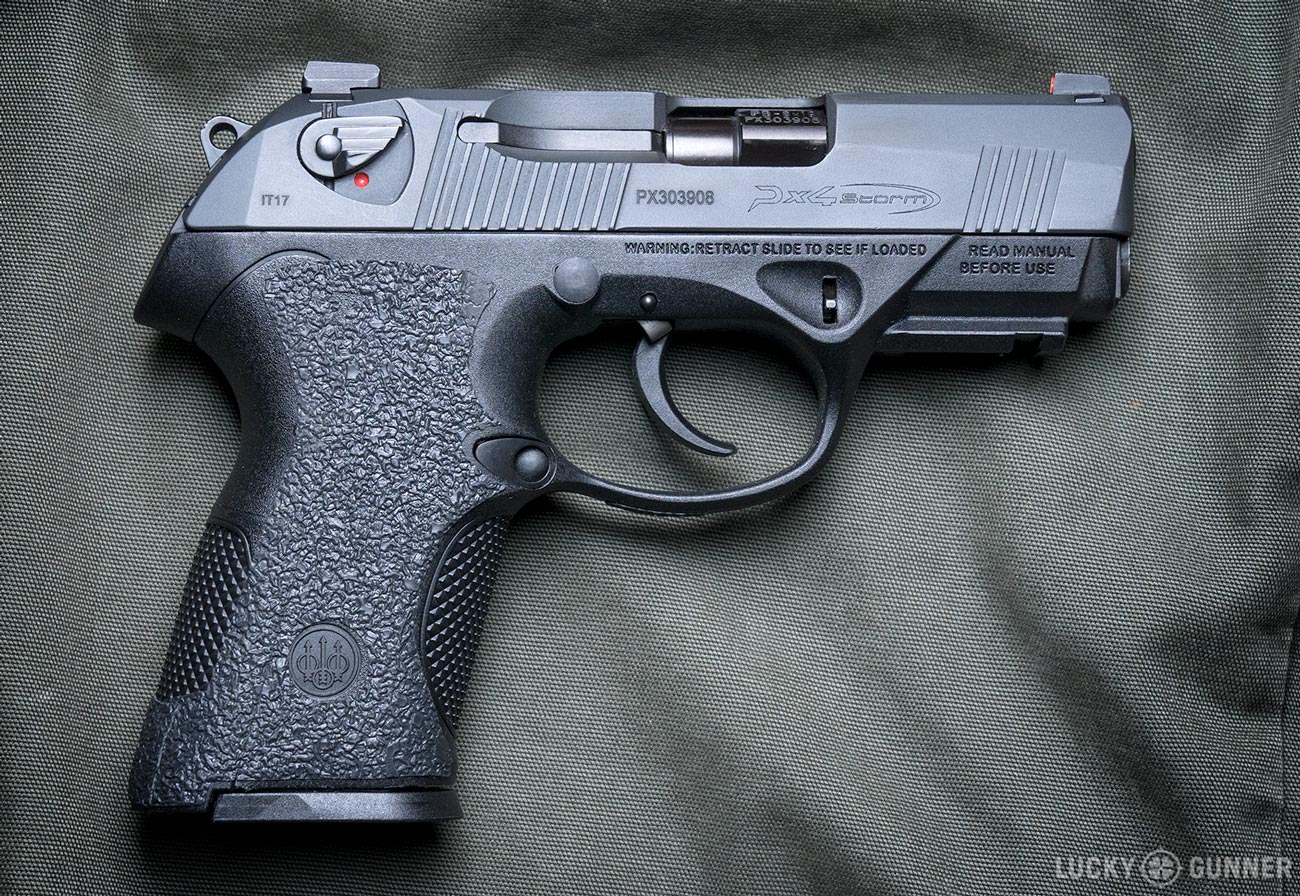 A polymer grip frame with aggressive texture doesn’t really add any resistance from friction until you apply grip pressure. But the Talon decals have kind of a sticky feel to them even when you touch them with light pressure. For me, this becomes an issue when I’m drawing the gun. For an efficient drawstroke, I want a full firing grip on the gun before it even comes out of the holster. So I want to be able to slide my fingers into place and get all the grip I’m ever going to get before I actually draw. The sticky Talon grip texture makes that kind of difficult. But once I actually start shooting, I don’t want the gun slipping around in my hand and that’s where the Talon grips are really helpful. So my compromise solution is to trim the grip tape off the front and backstrap where the gun already has some decent texture anyway and leave it on the sides. That’s worked out pretty well, but I think the gun could still really benefit from a good stipple job.

The Ameriglo sights are a huge improvement over the factory three-dot sights. I have all of my handguns setup with a plain black rear and a high visibility front sight, so this should be right up my alley. But I really wish the front sight wasn’t so wide. This pistol has a relatively short barrel which means a short sight radius. Combine that with a wide front sight and you’ve got a sight picture that’s really unforgiving of any minor misalignment. I have found that I can more reliably get good hits on small targets and targets at long distances when I have a slightly more narrow front sight. 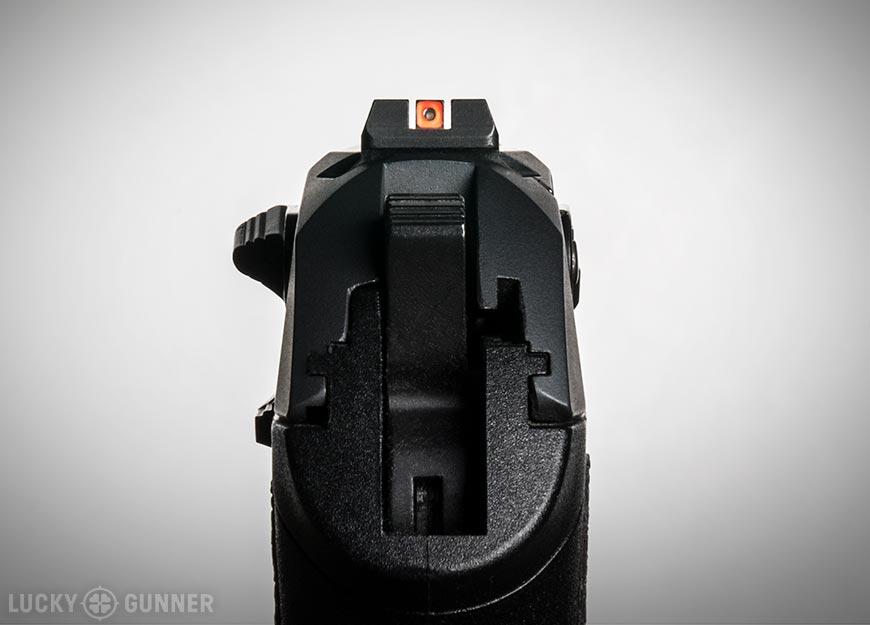 In the grand scheme of things, those are only minor complaints. The fact is that every handgun is a compromise. I have yet to find a pistol for any price that has everything I would want a carry gun to have. But this one has most of what I want and everything I need. It’s accurate and reliable. It’s got a good balance of shootability, concealability, safety, and cost. It’s a gun I can carry but also train hard with and take to high round-count shooting classes.

But even if this pistol isn’t really your thing, you have to give Beretta some credit here. The time between when the Px4 Compact Carry was first suggested and the time it hit store shelves can be measured in months, not years. That kind of responsiveness to consumer demand from a major manufacturer is almost unheard of in this industry. So hopefully, Beretta continues this trend and it’s a sign of more good things to come.

After yet another handgun parts breakage, I wanted to share some tips about how to avoid running into reliability issues...