A few weeks ago, I described the basics of the OODA Loop — Observe, Orient, Decide, Act — and how it is applicable to the lawfully armed citizen. Following that, I took a more detailed look at the Observe and Orient steps, which now brings us to Decide. Decision making under extreme stress is one of the most complicated tasks a person might have to do. In a life and death situation, time pressure is immense. Your brain is engaged in multiple tasks at once, including the other steps in the OODA Loop.

Due to this large demand on brain power, we are wired for efficiency — to quickly sift through possible courses of action, and discard those that have an unacceptably high chance of failure or are too difficult to implement. We can then select the first plan that comes to mind that is both able to be put into action and has an acceptable chance of success. This “first acceptable plan” decision making is quite different than when we have the luxury of time, the ability to think through the likely consequences, and can use “best plan” decision making. Fortunately, through training and experience, we can build up a mental library of those “best plans” in our brains to select as a “first acceptable plan” when under stress.

In stressful decision making, one of the most important assets we have for taking quick and effective action is prior planning. There are several ways to stock our brains with these plans, including training and experience both personally or vicariously through watching others accomplish the desired task. One method in particular that we can use daily is known as mental simulation.

Mental simulation is creating a scenario, deciding a goal, and then mentally running through various possible decisions. We then use our knowledge and expertise to predict the outcomes of each decision to see if they lead to the desired goal. An example is preparing to ask your boss for a raise. You’ll plan what you want to say, use your knowledge of your boss’s personality, and then think of which approach is most likely to succeed in the goal of getting the desired raise. You’ll think of likely questions your boss will ask and pre-plan answers so that you are prepared for the meeting with the best plan to get the raise you desire. If we routinely engage in mental simulation for defensive encounters, we will have the advantage of preparation, have multiple pre-set plans in our subconscious, and be able to react to threats more quickly.

Before we dive into the benefits of mental simulation, let’s look at a couple of potential downsides. If you lack experience in the arena you are simulating, your simulations may not be accurate. The majority of Americans are not used to violent conflict. They have not been in a fist fight as an adult, they’ve never been the victim of violent crime, and they have had limited first-hand exposure to violent criminals. As such, a lot of “I’ll just…” plans are developed. The “I’ll just…” plan is usually based more on fantasy and Hollywood depictions rather than true criminal behavior and actual violent encounters. “I’ll just…” plans are often one-size-fits-all with no secondary option. One example of an “I’ll just…” plan is sometimes used to justify carrying a pistol with an empty chamber. “I’ll just rack the pistol as I draw.” What if you’re injured? What if you’re actively being held down and kicked? “I’ll just…” plans often don’t survive first contact.

The most effective way to gain a baseline of knowledge for effective mental simulation is through quality training and engaging in realistic force on force training, such as the ECQC class offered by Craig “SouthNarc” Douglas.  In Craig’s own words, “…it covers criminal behavior and managing unknown contacts.  Plus… force on force, so guys find out quickly what works and what doesn’t.”

Following that, experiences can be gained vicariously by methods such as reviewing surveillance videos of real crimes and fights, which are readily available from many sources online.  Other than gaining actual experience, training and vicarious experience is the best way to help you gain that required baseline and see potential pitfalls in your plans so you do not have to rely on “I’ll just…”.

The second potential downside to mental simulation is becoming too attached to the simulation and failing to adapt when real world information tells you it’s not working. One method to combat this is to also simulate ways that your primary plan could fail, and then create secondary plans as a backup. Seeking quality training, engaging in realistic force on force training, and even reviewing surveillance videos of real crimes, which are readily available online, can help you gain that required baseline and see potential pitfalls in your plans so you do not have to rely on “I’ll just…”.

Now, let’s look at why it’s important to move as much decision-making as possible to the subconscious mind. Our conscious mind, our “working memory”, is very limited. Experts disagree on the exact number, but 5 to 7 seems to be the average number of items the working memory can retain at one time. Note that “item” is not a unit of measurement, and the amount of data you can hold within a given item varies by expertise. 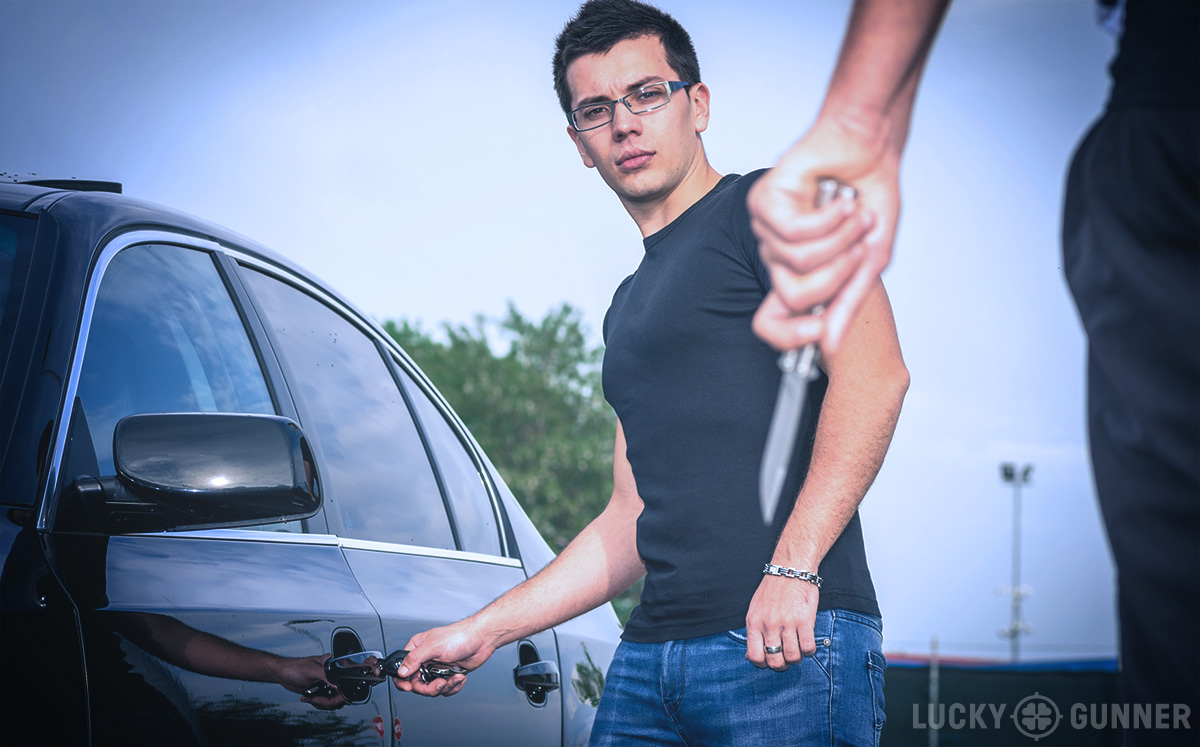 We can do the same thing with tactics and response to a criminal assault. If I have a pre-set plan to an attempted mugging while I’m pumping gas, that response is chunked into one item. I then have the rest of my working memory to contain my real time observations, to evaluate if my plan is working, and to adjust on the fly (cycling through the OODA loop). I am both faster in my response and less likely to be overwhelmed mentally.

To take advantage of this, we simply need to run through mental simulations while doing our daily activities. While you’re pumping gas and you see a car pulling into the lane next to you, play “what if”. What if…the occupant of the car comes over to me begging for gas money. What if that person keeps closing the distance with me even after I tell them I don’t carry cash and cannot help them? What if that person displays a pistol in their waistband and announces a robbery? Then, if the car actually pulls up and it’s just someone else pumping gas, you can look for your next “what if”. If the car pulls up and your mental scenario goes down, you aren’t surprised, you’ve got a plan, and you’re already a step ahead. If you do this routinely these pre-set plans become “chunks” subconsciously. You’ll build a repertoire of responses to various threats.

A “chunk” should contain the trigger for a given response and then the entirety of the response. This entirety is simply the plan we intend to follow, realizing that the real world is fluid and we may need to adapt our plan as things change around us. The efficiency and effectiveness of this approach can easily be seen in first aid training. “If someone appears to be choking, ask if they are ok or need help. If they indicate they do need help or cannot respond, perform the Heimlich Maneuver.” Note the Heimlich is a chunk for someone trained in its use, and you do not need to explain each individual step. Someone practiced at the Heimlich will not even think about each step, they will simply think “perform the Heimlich” and then do so.

So, what should a chunk for self-defense look like? Let’s revisit the gas station scenario. There are several triggers and possible decision points. Things you should consider would include:

So, let’s select a given scenario. For example, a single attacker who displays but does not draw a large knife in his belt who is near the front of my car while I’m at the rear passenger door pumping gas.
Pre-planned actions: Immediately draw my weapon to low ready. Loudly announce “Stay back! This man is trying to rob me! Call the police!” This serves to warn and startle him as well as get the attention of witnesses. It also announces what I am doing so any good Samaritan observing knows I am the victim, not the suspect. Attempt to create distance. If he flees, let him. If he approaches or reaches for the weapon, shoot him until the threat is stopped.

Now, simulate those steps and look for potential issues. One that I immediately came up with is that ordinarily when faced with an edged weapon that is not yet drawn, I’d try to create space. If I already began pumping gas, is the hose in front of me or behind me? If it’s behind me and I try to move backward without thinking, it will trip me. I can now incorporate that into my plan.

If a stranger approaches me, try to have the hose between me and the stranger both to eliminate the barrier to my movement and to make an obstacle between us he must overcome to physically attack me. How much better is it to plan that out now, in the safety of my own home with no time pressure, than to fail to plan it out and trip on a gas pump hose while someone with violent intent closes on me with a knife?

We can interrupt our opponent’s OODA loop at Decide as well, primarily by making his plans no longer feasible. Again, using the same scenario:

All of these slow the robber’s response and increase his mental load, reducing his effectiveness if he does choose to press the assault.

The final step of the OODA loop is “Act” — to put your plans into action. That’s what the majority of self-defense training out there is geared for — making you better at the actions of shooting, grappling, providing first aid, and other life-saving skills. You are likely well acquainted with the Act portion of OODA. Just remember that it’s a constant loop, and you must continuously cycle through it to Observe the outcome of your actions, Orient to the new reality, and Decide to continue, cease, or change your own actions.

As a follow up to my guide on choosing a handgun for new shooters, I made a video covering the...