What’s the best .22 LR load on the market? We have no idea. But we did shoot a few out to 200 yards to see what kind of bullet drop to expect based on muzzle velocity.

Details are in the video below, or scroll down for the full transcript.

Hey everybody, I am Chris Baker from LuckyGunner.com. Last time, we talked about the idea of a true practical rifle. For me, it’s a suppressed Savage .22 LR bolt action that I use for pest control. Today, I’ve got a quick follow-up for you with some more .22 goodness. I want to talk about practical external ballistics for the .22 LR cartridge.

What is “Practical Ballistics?”

What I mean by practical external ballistics is that I want to look at what the bullet does in flight and then apply that knowledge to how I’m going to use the rifle outside the shooting range. The main thing I really want to know is bullet drop. For the distances I’m planning to use the rifle, where do I need to aim in order to hit my target? Velocity is important because faster bullets will drop less by the time they reach the target. Velocity is also important for pest control because I want to make sure the bullet’s going to have enough energy to take out that animal quickly and cleanly. But that gets us back into the territory of terminal ballistics.

You can find numerous ballistic tables for .22 LR online. There are multiple ballistic calculator apps that’ll give you excruciatingly detailed information about what a bullet should do at a specific distance. These can all be very useful tools. Of course, ballistic tables are just a starting point. You have to actually shoot some groups out of your own gun to find out what your specific rifle and ammo combo are going to do.

But the issue I have with a lot of ballistic tables is that they’re often based on the velocity you get from something like a 20 to 24-inch barrel. A lot of the most common .22 rifles today have barrels closer to 16 to 18 inches. That means the ballistic data from a longer barrel might not even really be useful as a kind of ballpark starting point.

So, we did some of our own testing to give you one more data point to work with when you’re considering .22 ballistics.

We measured the bullet drop and muzzle velocity of six different loads out of my 16-inch Savage Mark II.

Two of the loads were subsonic with muzzle velocity a little over 1000 feet per second. Those were the CCI 40-grain Polymer Coated Clean-22 and the Eley 38-grain Subsonic Hollow Point.

And then we had one extra high velocity load that measured around 1500 feet per second – the 32-grain copper plated hollow point CCI Stinger. 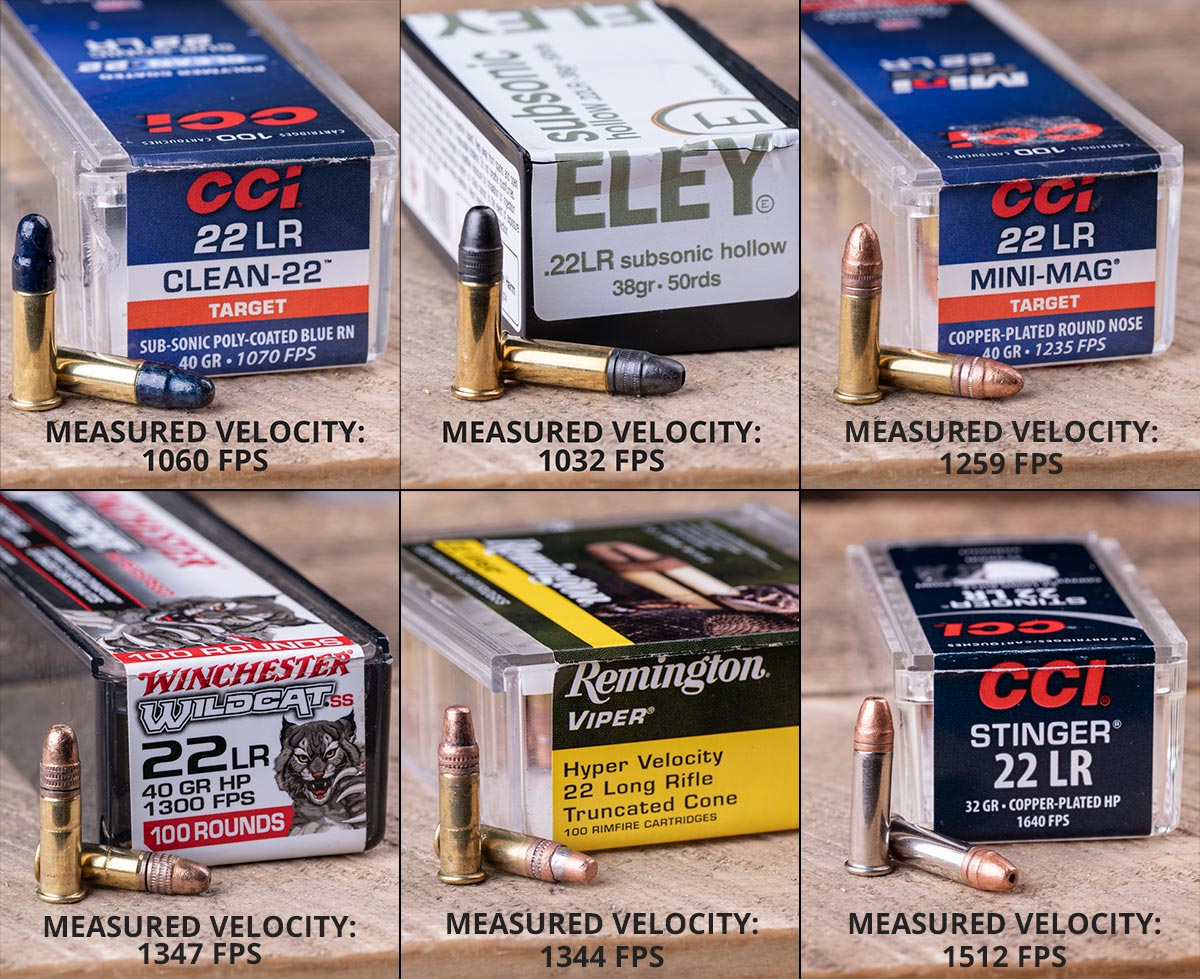 To be completely honest, for me this is more of a theoretical than a practical exercise. For pest control, I’ve never needed to take a shot more than 50 yards away. My property is just not that big. So I use subsonic ammo with a suppressor to stay as quiet as possible. I zero the gun at 50 and it’ll hit within about a half inch of that between 15 and 50 yards. It’s pretty straightforward.

We zeroed our rifle at 50 yards, so that’s our starting point. At 100 yards, the subsonic loads dropped more than 7 inches. The Stinger has about 50% more velocity and it only dropped two inches. Moving out to 150, the gulf between the fastest and slowest bullets is even wider. The Eley 38-grain Subsonic that I like to use at home drops 30 inches at 150 yards, while the Stinger drops just under 11 inches. The other supersonic loads were a few inches lower.

All of these bullets really start to drop between 150 and 200. We had to staple together a special extra tall target just to catch all of the bullets. At 200 yards, the Stinger impacts 2.5 feet below the point of aim. The Eley drops 4.5 feet.

I know lots of shooters practice with .22LR out to 300 and 400 yards and beyond. For that, you really need a scope with some kind of bullet drop reticle and you have to be 100% sure of your exact range. That’s the difference between ballistics and what I would call practical ballistics. For small game hunting or pest control, 200 is probably pushing the limit of what’s practical. With this gun and the simple duplex reticle in this optic, I wouldn’t be comfortable trying to shoot a small animal at an unknown distance if I thought it was much past 100 yards.

But even at 100, we can see how ammo selection makes a huge difference. The higher velocity loads give you a big advantage because they don’t drop as much. The CCI Stinger, for example, is marketed as a Varmint load, and that’s not just hype – that extra velocity really does make range estimation less of a factor you have to worry about with small targets. In my case, with targets inside 50 yards, a subsonic load works just fine because keeping the noise down is a greater priority than a flat trajectory.

Okay guys, that’s all I’ve got for today. Hope you found that helpful. Next time you need some ammo, be sure to get it from us with lightning-fast shipping at LuckyGunner.com.

By popular demand, we are finally revisiting the idea of the "Practical Rifle". But this time around, our take is...