By popular demand, we are finally revisiting the idea of the “Practical Rifle”. But this time around, our take is a little different than the concept we presented five years ago. What if the most pressing need you have for a rifle is so you can defend your chickens and squash from small woodland creatures? If that’s the case, then a suppressed .22 bolt action might be the most practical rifle you can own.

Hey everybody, I am Chris Baker from LuckyGunner.com. A few years ago, I made a pair of videos (part one and part two) inspired by Randy Cain’s concept of the practical rifle. These are loosely defined as traditional bolt action hunting rifles that are lightweight and quick handling with low power optics. It’s essentially a spinoff of Jeff Cooper’s scout rifle concept. But instead of being defined by a strict list of specifications, the practical rifle hardware is more flexible based on the user’s context.

I have received a ton of requests over the years to revisit this topic. That’s something I would love to do because it’s a lot of fun to shoot bolt guns fast. But I really just don’t have anything else to say about it. The practical rifle concept is interesting because it forces us to look at bolt actions from the perspective of self-defense or long-term survival. It’s a thought-provoking idea, but it’s really not all that practical for most of us on a day to day basis.

A Different Kind of Practical

If I were to take that term “practical rifle” at face value, I would end up with something a lot more like this – which is the rifle I want to talk about today. This is what I’m gonna call the Backyard Sniper rifle. It’s really just a suppressed bolt action .22 that I use for pest control. We have a vegetable garden and we raise chickens. Both of those things tend to attract small mammals that want to eat our veggies and eggs. And sometimes the best way to prevent that from happening is to shoot them in the face.

Over the years, my trusty backyard sniper rifle has helped me dispatch rats, rabbits, chipmunks, and raccoons. We live in a neighborhood in the county where there’s a good amount of space between houses. Enough that it’s both safe and legal to do this. But our neighbors are close enough that I try to do it as quietly as possible. Very few firearms make as little noise as a suppressed bolt action .22.

I own carry guns and home defense guns that, fortunately, I have never had to actually use for their intended purpose. I do hunt very occasionally – not often enough to actually call myself a hunter by any stretch. This .22 is the only gun I own that actually gets used on a semi-regular basis for shooting anything other than paper and steel. In my world, that makes it a true practical rifle.

Let’s take a look at the hardware and then I’ll talk about why I set up the gun the way I did. The rifle itself is a Savage Mark II FV-SR chambered in .22 LR. I replaced the factory stock with a Boyd’s wood stock paired with a trigger guard and magazine plate from DIProducts.

For the optic, I’ve got a Vortex Diamondback 2-7×35 rimfire scope. The suppressor is a Silencerco Sparrow. On the forend, is a Blackhawk swivel stud to picatinny adapter to accommodate the Streamlight TLR-1 HL. And finally, the sling is from Tab Gear. 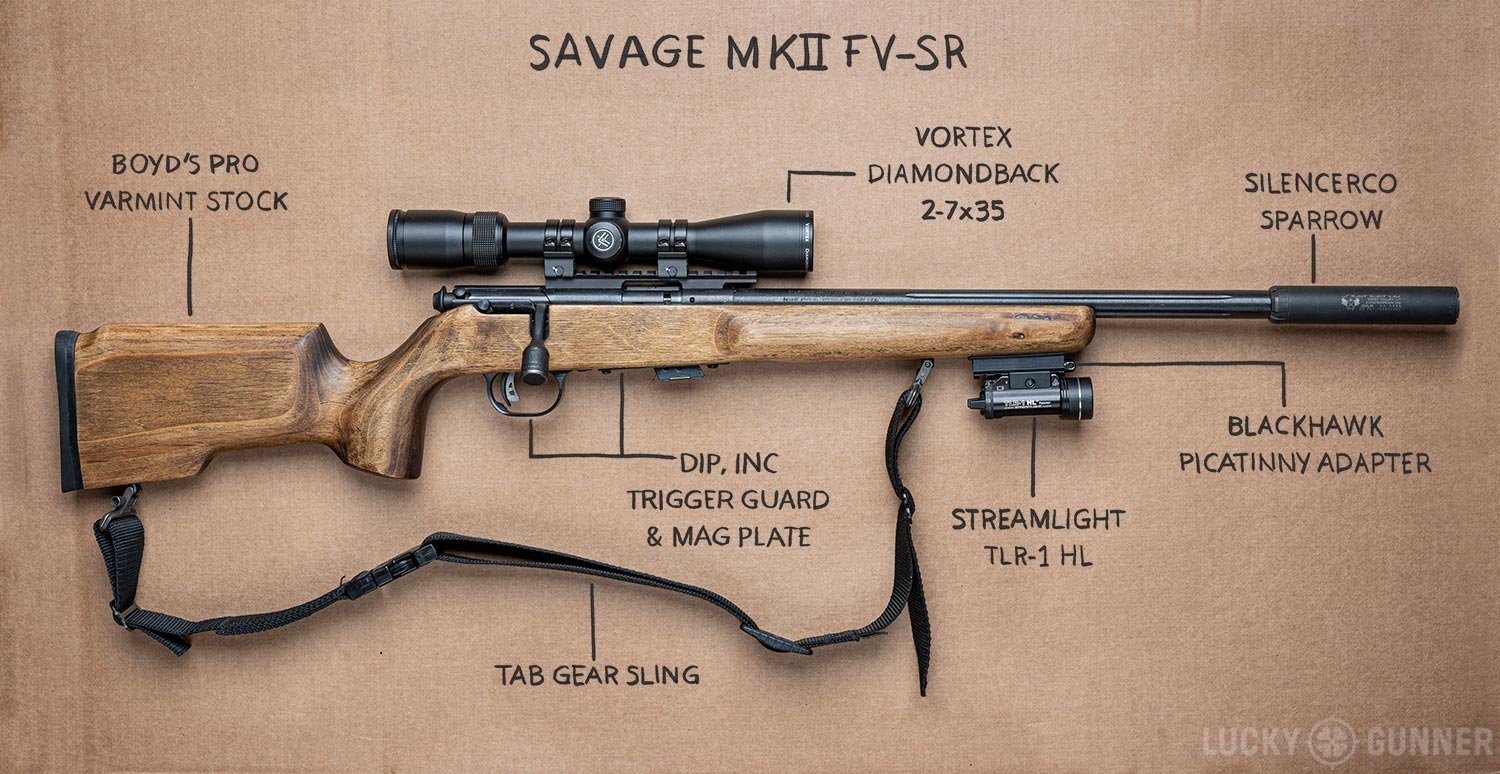 Now, if I had to guess, a bunch of you are shaking your head at this and wondering why I needed to hang all this junk on my rifle just to shoot rabbits in the backyard. I could have used my granddaddy’s 80 year old tube-fed .22 from Sears and it would kill them just as dead. And there are probably just as many of you from the precision rimfire crowd turning your nose up at this thing because it’s a cheap piece of junk.

You’re both right. But I don’t care. This is one case where I am definitely not suggesting anyone follow my example. This gun was configured for a specific practical purpose, but it’s also an excuse for me to play around, so I’m doing what I want.

The Savage Mark II series has been around for a long time with dozens of variants made. The FV-SR version has a heavy fluted 16-inch barrel, a threaded muzzle, a picatinny rail, and an extra large bolt handle. It’s styled to look kind of like a tactical bolt action, I guess. Honestly, that’s not really my thing. I do like the big bolt handle, but I could do without the heavy barrel. I bought this gun nine years ago this month and at the time, it was one of the only .22s that came from the factory with a threaded muzzle.

Fortunately, suppressors are much more popular now and we have a whole lot more options for suppressor-ready 22s than we did back in 2013. If I were to do it all over again today, I don’t know that I would ultimately choose this rifle. But I would consider it. It’s quiet, accurate, and reasonably priced at around $260.

The biggest flaw for me was the hollow plastic factory stock. It was very light, which made the rifle feel front-heavy. And the comb height wasn’t tall enough for using a scope. So I replaced it with this Boyd’s Pro Varmint stock. It came unfinished, so I had to stain and finish the wood. I also cut it down a bit to get a 12.5-inch length of pull which is ideal for me.

In 2013, this stock was a bargain at $80. But the price has since gone up to $180. You also have to buy a separate trigger guard and magazine plate. The parts that came with the original stock don’t fit. So that’s another $46. When you add that to the cost of the gun, for the same price, you could start out with a slightly nicer bolt action .22 that would not need a stock upgrade. 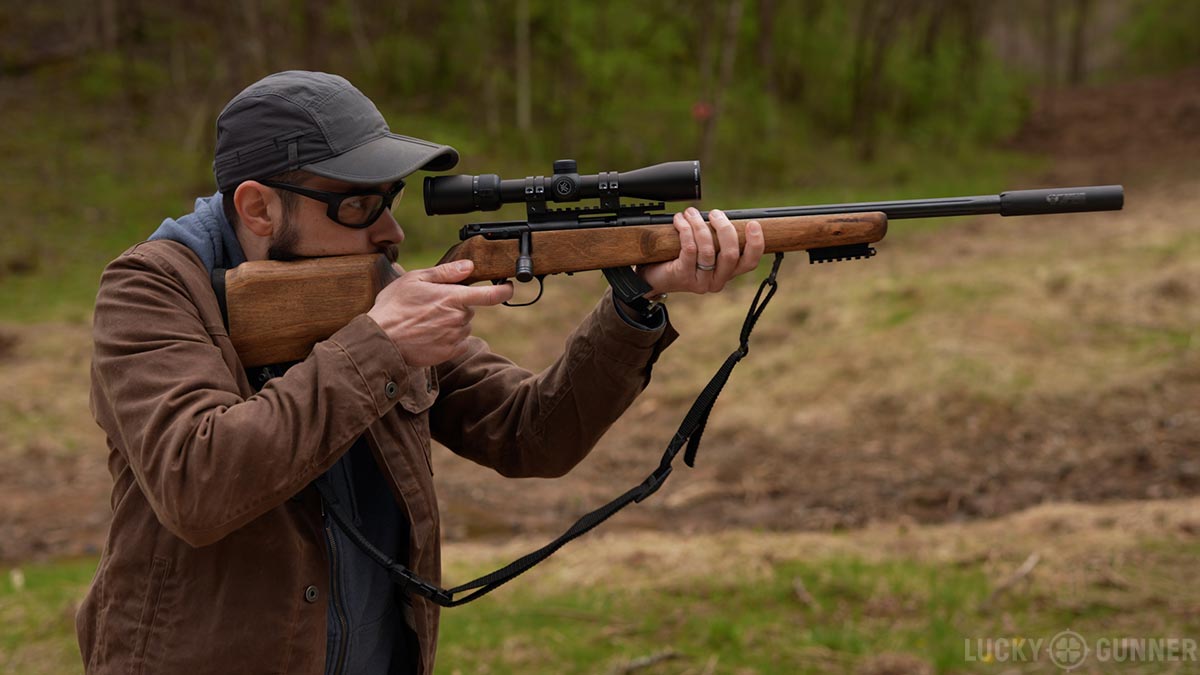 That said, I’m very happy with this rifle and stock combo. The stock really elevates this little rifle to a new level. It no longer looks or feels like a budget-level gun. It adds some weight, but the balance and the comb height are both much improved.

The Savage feeds from detachable magazines that hold either 5-rounds or 10-rounds. I use the 10-round mags mostly at the range. At home, I always use a 5-round mag. The lower profile makes the gun easier to carry and doesn’t get in the way when I’m shooting.

The Vortex Diamondback 2-7x is a pretty decent rimfire scope. I just upgraded to this one last year. I had been using a very old Burris 2-7x scope that had the worst eye box of any optic I’ve ever seen. You don’t see many 2-7x scopes anymore, but I think it’s a really useful magnification range. They tend to be smaller and lighter than a 3-9x. They are also lighter and more affordable than most of the 1-6x or 1-8x scopes.

The Diamondback is definitely not the highest quality glass. Aiming at a bullseye at the range, I can tell I’m looking through a sub-300 optic. Practically, it does what I need it to do, which is to help me ensure the tiny thing I’m aiming at 25 to 50 yards away is a rat’s head and not a rat-shaped tree stump or rock.

The picatinny rail and Streamlight TLR-1 are also fairly recent additions to the rifle. I only clamp the light on there when I actually need it. Some of the critters that like to bother my chickens don’t come out until after sunset. Because of the contour of the stock, the beam does not actually run quite parallel to the barrel. But the beam is wide enough that that hasn’t been a problem so far.

This Blackhawk picatinny adapter attaches to the extra sling stud that would usually be used for a bipod. I actually have no idea where I got this thing — I found it in a box of random accessories in my garage. I don’t think Blackhawk actually makes them anymore, but it looks like GG&G has a similar adapter.

The Silencerco Sparrow was one of the best 22 cans on the market when I got it nine years ago, and it’s still a popular option today. As far as I know, the basic design hasn’t changed much in that time. It adds just 6.5 ounces to the rifle. With subsonic ammo, it’s ridiculously quiet. It probably makes less noise than my staple gun.

Bolt actions and lever actions are always going to be a little more quiet than semi-autos. But for .22s, the difference is minimal. You’d have to be pretty close to the gun to notice.

But bolt actions also have a slight edge in terms of accuracy to cost ratio. My Savage seems to really like the Eley 38 gr Subsonic hollow points. I shot a few groups the other day and this was my first 5-shot group with that load – a half inch at 50 yards with four of the five rounds making a single hole. 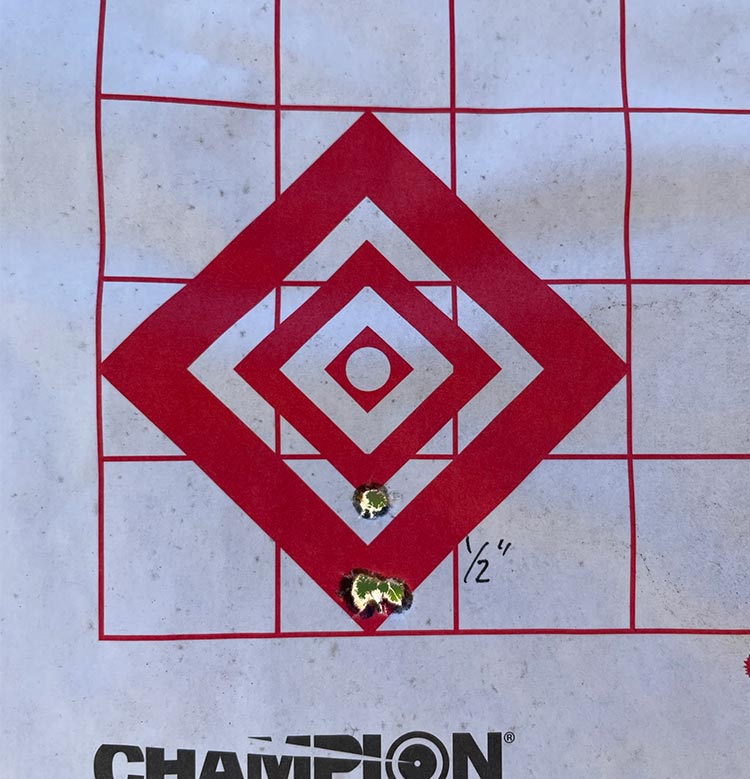 That’s not bad for a budget grade rifle. You can get that kind of accuracy with a semi-auto, but probably not an entry level model unless you do some work to it. When I’m shooting at backyard pests, I want them down in one shot, and I don’t want them running off to die in my neighbors’ yard, so I almost always go for headshots. I can do that because I know the rifle is capable of making it happen, and it hasn’t let me down so far.

The only real downside to this setup is the weight. Out of the box, the rifle weighed 5.5 pounds. With all this stuff on it, it’s now 8.7 pounds loaded. That’s pretty hefty for a rimfire. If I was walking around in the woods with it for hours at a time, I would want something a bit lighter. But for how I’m using it, the weight isn’t really a major concern.

So there you have it. That is my idea of a practical rifle. It does exactly what I need it to do and it also happens to be a lot of fun. Throw a bipod on it and it’s ideal for teaching kids or nervous first-time shooters. It’s just an overall useful gun to have around. If you’ve got your own version of a practical rifle that you’ve set up for your needs, tell us about it in the comments. And when you need some ammo, be sure to get it from us with lightning fast shipping at LuckyGunner.com.

How to Mount a Rifle Scope