Welcome to another Wheel Gun Wednesday! We’re picking back up where we left off a few weeks ago with my quest for the ideal carry revolver. In case you’re just joining us, I started off by laying out some criteria for what I consider to be the features to look for in a revolver that’s as easy to shoot and train with as it is to carry every day. The first candidate I profiled was the S&W 386 followed by a pair of 3-inch K-frames. Testing with those guns is ongoing, and today I’m adding the next contender: Ruger’s SP101.

In most parts of the U.S., the practice of carrying a concealed handgun has only become common and legal within the last few decades, but the popularity of small frame snub nose revolvers is practically ancient. With names like “Detective Special” and “Chief’s Special”, the apparent target audience for the snubby was originally law enforcement personnel.

In that profession, the snub nose was considered a secondary, or backup weapon that could be carried as a complementary option to a larger sidearm. However, the small frame snubby often took the role of a primary handgun for plain clothes cops, or guys whose roles didn’t require them to get into many physical confrontations.

Today, you’re more likely to hear the terms “backup gun” or “secondary” used more generically, usually to refer to very small, concealable handguns that are intended to be carried often and shot very little. The current small revolver market is dominated by lightweight offerings that certainly fit this description. It’s almost a foregone conclusion that if you’ve opted to carry a snub nose revolver, then you intend it to be a contact distance weapon only that will rarely see the light of day at the practice range.

Ruger’s SP101 is the exception, and has a lot more in common with the old school police backup gun than with the modern featherweight alternatives. It’s the secondary that shoots like a primary. This all-steel, 25 ounce 5-shot snub nose is different from other small .357 magnum revolvers because it doesn’t just “tolerate” full house magnum loads, it craves them. Not that I’d feed it too many full power loads — the increased recoil of magnums over a decent .38 +P load isn’t worth the marginal tradeoff in performance out of a short barrel, even in a revolver this stout. Even so, the SP101 is a perfect example of why Ruger’s revolvers have a reputation for being overbuilt. 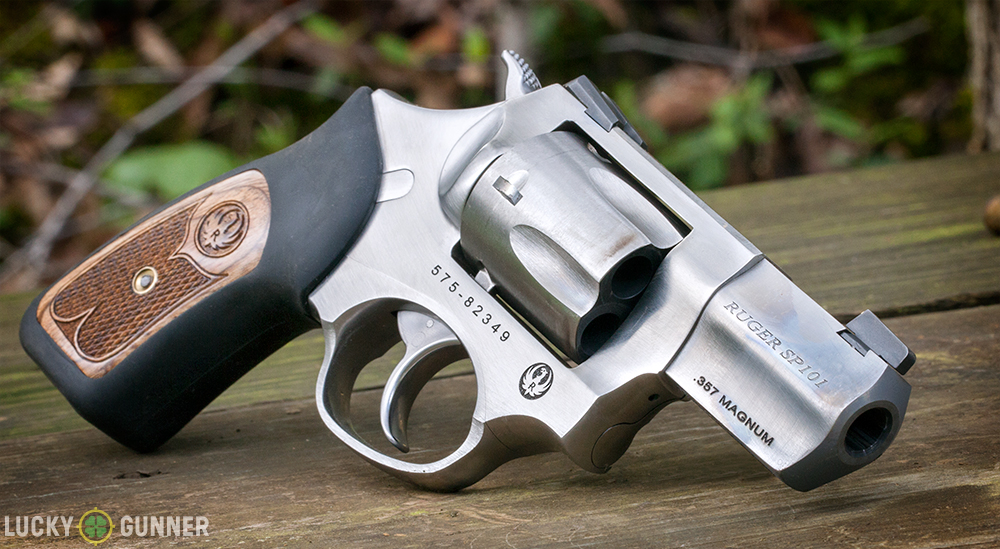 The SP101 was first introduced in 1989, which is a bit late in the revolver game to consider it a “classic”, but it has still managed to develop a strong following over the years, partly due to its durability. Compared to its lightweight contemporaries, the SP101 is chunky and heavy, especially considering its humble 5-shot capacity.

The weight might make it less convenient in the holster, but I think of it as the snubby for real shooters. High round counts and long range sessions are no problem for this gun, and easy on its owner, too. A steel Smith & Wesson J-frame is its closest competition in this regard, but a distant second in my opinion.

There are a few different versions of the SP101 available. In .357 magnum, it’s currently being produced with either a 2.25-inch or 3-inch barrel and fixed sights. There’s also a “target” model that comes equipped with a 4.20-inch barrel, adjustable rear sight, and fiber optic front sight. That one is available as a 5-shot .357, 8-shot .22 LR, or the newly released 6-shot .327 magnum.

The model I opted for is the Wiley Clapp .357 magnum, a Talo distributor exclusive model. It’s similar to the standard 2.25-inch model, but in place of the fixed sights, the Wiley Clapp SP101 has a drift-adjustable Novak rear sight and brass bead front sight. It also has a nice set of textured wood inlays on the grips, and a tapered cylinder, but the sights are really the big selling point. This model was released last year, following the success of the Wiley Clapp GP-100. I would have preferred a WC SP101 with a 3-inch barrel like the one found on the WC GP-100, but the 2.25-inch barrel is probably more in line with what most snub nose customers are looking for.

As with the other guns I’ve been considering in my quest for the ideal carry revolver, I’m using a very specific set of criteria to compare the merits of the SP101 to the semi-auto that I normally carry: a Smith & Wesson M&P 9mm compact. The M&P9c and other compact semi-autos like it offer a very attractive combination of shootability, ease of carry, and ammo capacity. Ultimately, I’m trying to answer the question of whether there’s a revolver out there that can compete with that combination of advantages. Do you have to give up more than capacity when switching to a revolver of similar size and weight? Does a revolver offer any real-world practical advantages over the semi-auto that we don’t typically think about? 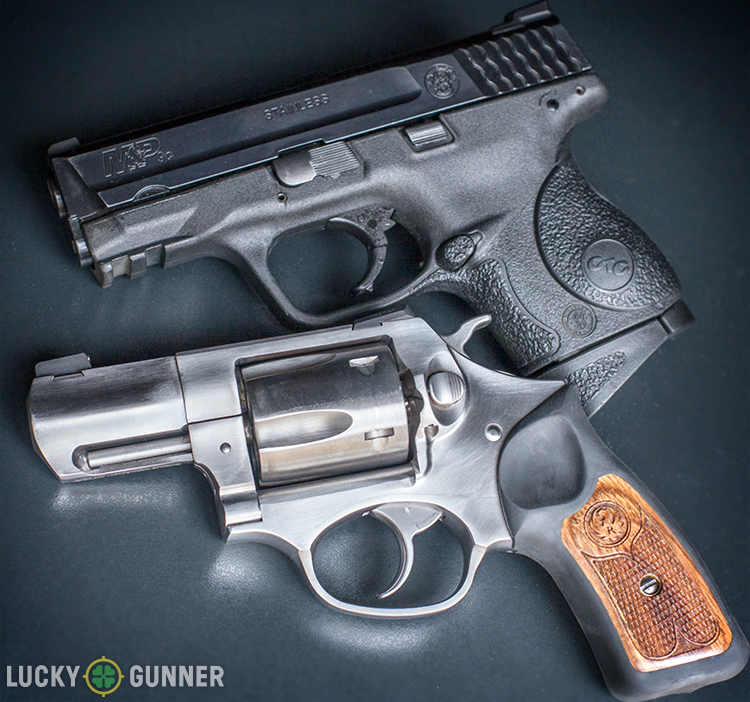 I’ll be tackling these questions in depth at the end of the series. For now, here’s how the SP101 measures up to the original criteria.

So far, the SP101 has lived up to its reputation. It’s easy to shoot for such a small revolver, but heavy compared to a lightweight like the Ruger LCR. But I don’t want to overstate either of those qualities. The chunky steel frame does absorb recoil nicely, and with the spring kit installed, the trigger is incredibly smooth. It may be easier to shoot than just about any other small frame revolver, but it’s still way behind the superior handling characteristics of the S&W 64 and 66 I’ve been practicing with. 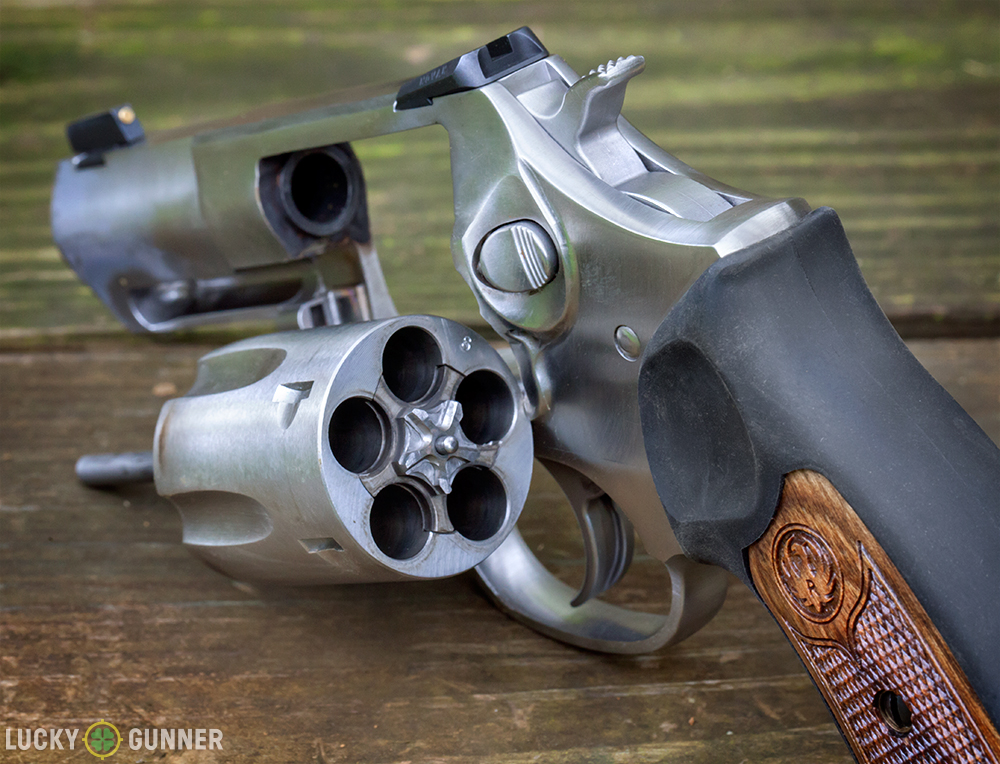 And yes, it’s heavy, but that’s also relative. It’s 50% heavier than the .357 Ruger LCR, but half a pound lighter than the K-frames. With five rounds of .38 +P on board, it’s right on par with the weight of a loaded Glock 26 or M&P compact, both of which are considered on the light side. The weight of the SP101 is certainly heavy in relation to its 5-shot capacity, but not overly heavy for a carry gun in general.

Thinking back to my post on the benefits of revolvers for “casual” gun owners, the SP101 is just the kind of gun I had in mind. It’s durable, simple to operate, and will probably still work even if it’s left neglected in a night stand drawer for decades at a time. It’s small enough to be carried, but the recoil should be manageable even for most novice shooters. For the more serious shooter, it’s the backup gun that shoots like a primary.

I’ll be putting some more ammo through this little guy over the coming weeks to find out how it compares to the S&W 386, 64, and 66. And I might have one or two more candidates to throw into the mix before the quest is over, so standby…