It’s Wheel Gun Wednesday! This series is devoted to exploring the deeper issues of using a revolver for self-defense – both the good and the bad. Today I’m continuing the “Quest for the Ideal Carry Revolver” that I started last month. Be sure to check out part one if you missed it!

What’s the downside to ditching a modern double-stack semi-automatic as an everyday carry pistol in favor of a revolver? You lose ammo capacity and the ability to reload quickly, but is that all you have to give up? And what advantages might be had by carrying and training with the revolver that we don’t normally think of? That’s what I aim to find out in searching for a carry revolver to temporarily replace my trusty S&W M&P 9mm compact.

The M&P9c is easy to carry and I can shoot it almost as well as a full size. I want a revolver that’s analogous to that with comparable size and weight, so I’ve started my search with mid-size carry revolvers in the 20-30 ounce range. Unfortunately, the options in this category are limited. Most lighter revolvers are the small-frame featherweights that are made to carry a lot and shoot very little. Mid-size revolvers tend to be constructed from steel, and even the shorter barrel models often tip the scales at more than 36 ounces.

Fortunately, there are a few options in between these two extremes. I’ve identified a handful that I’m testing out over the next several weeks. I’ll be continuing our series with a quick profile of each revolver on the list along with some of my first impressions. After I’ve had a chance to run each of them through their paces, I’ll summarize my findings and pick a “winner” to run through some drills and tests to see how it measures up against a semi-auto in every imaginable respect.

Let’s take a look at our first challenger…

Starting in the late 90s, Smith & Wesson released several mid and large frame lightweight revolvers in .357 magnum, as well as some of the larger calibers like .44 magnum and .45 ACP. Most of these models have disappeared from Smith’s catalog in the last few years, but they’re available on the secondary market if you’re patient and willing to pay close to the original MSRP.

The larger alloy revolvers built on the S&W N-frame are too wide to be comfortable for my preferred method of appendix carry, so that leaves the model 386 — a medium L-frame .357 magnum. You’re probably familiar with the steel L-frames like the S&W 686, but the 386 series are mostly known only to more dedicated revolver aficionados. High price tags, low sales for revolvers in general, and S&W’s confusingly broad product catalog were all likely factors that prevented the 386 from ever taking off. Interest in revolvers has rebounded in the last couple of years, and prices on the used market are quickly rising for many discontinued S&W models, including the 386.

There have been a handful of variants of the 386, each with a different set of features. The last to cease production was the 386 XL Hunter, but its 6” barrel means it’s not a candidate for concealed carry. The 386PD and 386 Mountain Lite both have short barrels and titanium cylinders in addition to their lightweight alloy frames. That means they weigh in at under 19 ounces each, and I want a little more heft than that to help tame the recoil of a fighting revolver.

That leaves the 386 Nightguard and the 386 Sc/S. Both have 2.5-inch barrels, Scandium alloy frames, and 7-shot steel cylinders. The Nightguard is equipped with a tritium front sight and a Cylinder and Slide rear sight and weighs 24.5 ounces. The Sc/S (for Scandium and Steel) is very similar, but has the traditional S&W adjustable sights and weighs 21.2 ounces. 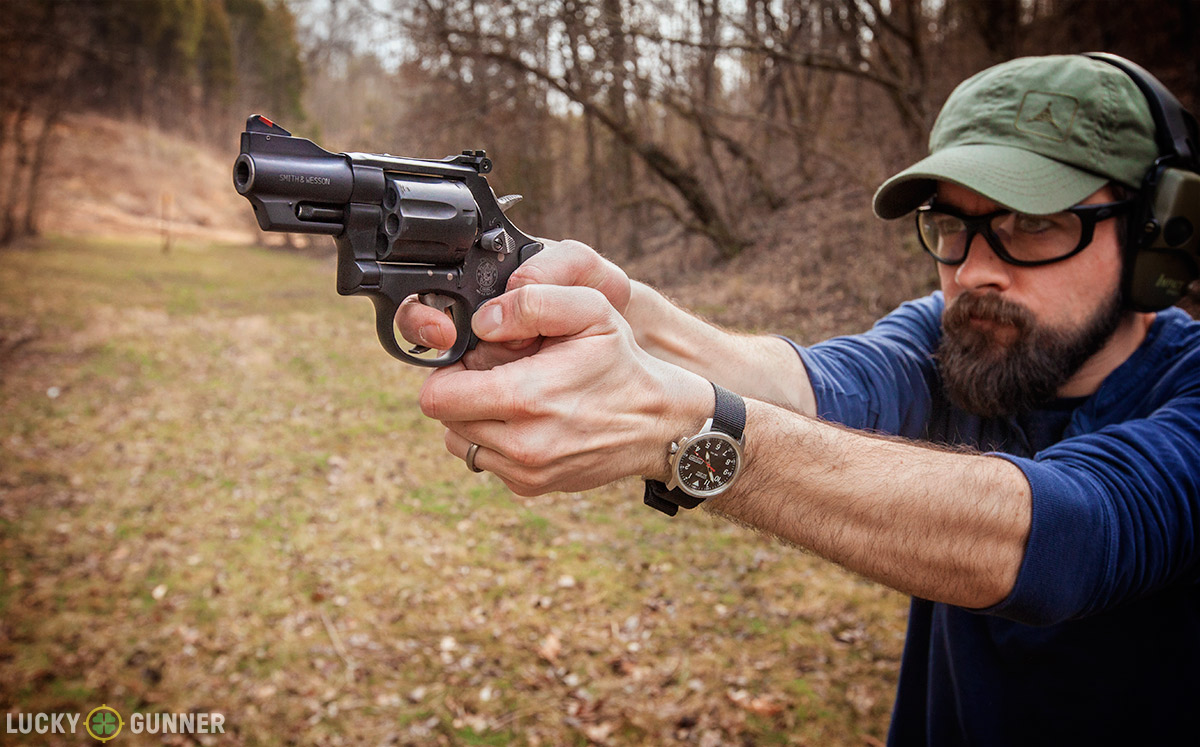 I actually owned a 386 Night Guard not too long ago, and it was even featured on the Lounge once. But I got frustrated with trying to find a suitable holster for it and eventually sold it. Now that I’m taking a fresh approach to this revolver thing, I wish I hadn’t. None of the models in the discontinued Night Guard series are particularly easy to come by, and I really liked the large XS tritium front sight combined with the more traditional rear notch. When I started looking a few weeks ago, I wasn’t able to find another 386 Night Guard at a price I was willing to pay, but I did come across an Sc/S priced at $750. Not cheap for a carry gun, but a fair deal compared to the prices the other 386 models have been fetching recently on the used market. 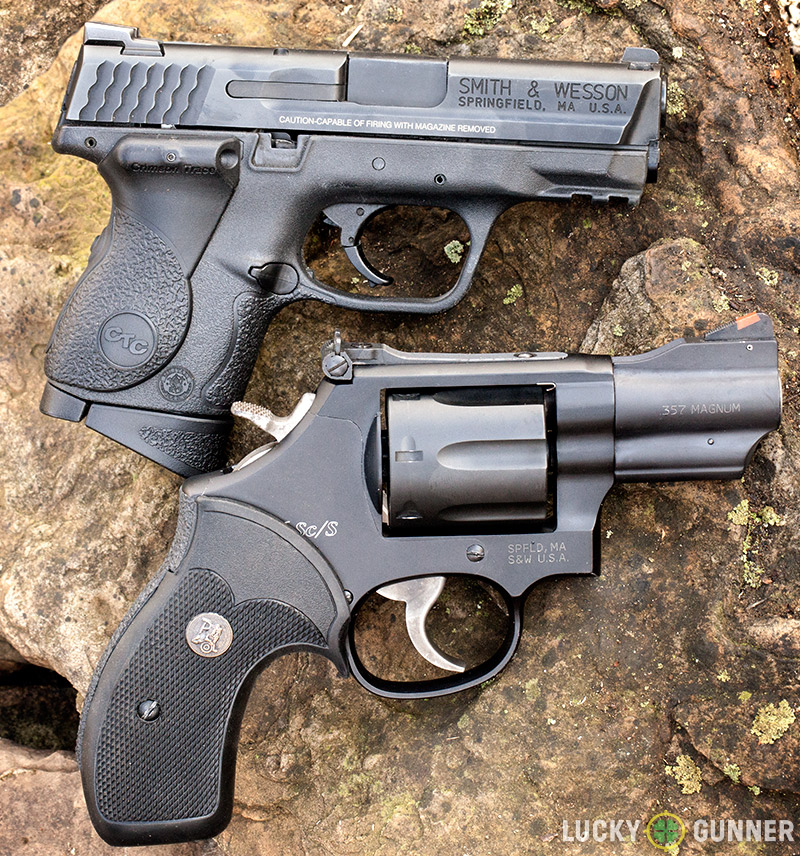 Let’s see how it measures up to the criteria I laid out last time:

I’ve got a lot more shooting to do with this and the other revolvers on my list before I give my final thoughts, but I’ve had a chance to run a few hundred rounds through the Sc/S and have some initial impressions.

On the positive side, the alloy frame is really nice. It’s impressive that a revolver this large can feel so light on my belt. Without the reciprocating slide absorbing some of the force, felt recoil and muzzle rise are both more pronounced with the 386 than with a 9mm autoloader of equal weight. That said, it wasn’t difficult to manage, and with target loads, certainly easier to shoot than an alloy J-frame, or even a small single stack 9mm.

I’ve mostly been using .38 Special American Eagle 130 grain FMJ, which are fairly soft shooting anyway, but I’ve also run a small assortment of +P rounds, and recoil is still controllable. There’s definitely some discomfort during rapid fire strings with the +P loads, but the shot timer tells me I’m not any slower than with the standard ammo. But that might change as I get in more practice. At this point in my skill development with the wheel gun, I think the time taken to manipulate the double action trigger is more of a speed bottleneck than recoil management.

Thanks to the robust aftermarket support for S&W L-frame revolvers, I’ve got a lot of choices for grips. I’ve been experimenting with different “boot grips” that don’t extend past the bottom of the grip frame for maximum concealment. The Hogue finger groove grips that came with the 386 Sc/S weren’t working for me as I demonstrated in this post, but aftermarket groove-less grips are not as common as I was hoping. I’ve got a few more sets of grips on the way, but so far the inexpensive Pacymayr compact grips are working better than expected.

The search for a holster isn’t going quite as well. Having had the same problem when I owned the 386 NG, I knew this would be an issue. It’s not that there aren’t any holsters made for short barreled L-frames, but very few of them are designed with appendix carry in mind.

You might be wondering why I don’t just switch to behind the hip carry. I don’t know if you’ve seen any of the photos of me on the blog, but my body doesn’t exactly come equipped with a whole lot of extra padding. Carrying a hard metal object so that it rests directly against my hip bone all day is kind of a drag. And since I always carry my M&P and other semi-autos in the appendix position, changing my carry method would defeat the purpose of the project anyway. So I now have my third L-Frame appendix IWB Kydex holster on order. The first two were well made, but in both cases, the ride height was way too high. It placed the end of the grip just under my ribcage when standing — too high for a rapid draw stroke and an even bigger impediment to effective concealment.

Someone is sure to mention the S&W internal lock on this gun. I’ve already given my two cents on that issue, so I won’t go into detail. I don’t like the lock on principle or in practice, but I don’t think it’s necessarily a deal breaker. Other potential negatives for the 386 Sc/S are the partial length ejector rod and the aforementioned gritty trigger, but I’ll have to run a few more practice sessions with this gun to determine whether they end up being an actual detriment to performance.

So right off the bat, the 386 is clearly not without its flaws. But it can still boast a unique set of features not found any many other revolvers. I might have to tweak a few things here and there, but in the long run, the combination of a 7-shot capacity, light weight, and shootability might make the 386 one of the best mid-size carry revolvers ever made.

Of course, it’s got some stiff competition. Out of the candidates I’ve chosen to test so far, this is the only “oddball”. Most of the others are fairly predictable if you’re an experienced revolver enthusiast. So if an aluminum 7-shooter doesn’t do anything for you, just stay tuned for next week’s selection…

I like to believe that every shooter experiences certain milestones in their life that shape the way they choose to...