Guns Are Loud: Save Your Hearing

Over the past couple of weeks, we’ve been taking a look at some of the gear I rely on at the shooting range. First was my favored eye protection, and last time I talked about the importance of shot timers. Today, we’re wrapping up this mini-series with a quick review of hearing protection. A good set of ear pro should be in the range bag of any shooter. It’s a crucial piece of safety gear that we often don’t pay much attention to, but it’s worth noting that not all hearing protection is created equal. For the past 18 months or so, I’ve been using some electronic earplugs from Etymotic. The video below has the details about why I chose this particular solution to protect my hearing, or as always, you can scroll down and read the transcript.

According to medical experts, symptoms of hearing loss include a sense of fullness in the ears, speech that sounds muffled, and a ringing in the ears, also known as tinnitus. Exposure to the sound of a single shot from a .22 rifle without protection is all it takes to cause permanent hearing damage. And even if you don’t notice any symptoms today, the effects of noise-induced hearing loss are cumulative, so every gunshot that reaches your ears is slowly eroding your ability to hear little by little.

Fortunately, effective hearing protection is inexpensive and widely available. Even the cheap foam earplugs you can get for under a dollar offer a noise reduction rating or NRR of up to 32 dB when they are worn properly.

Of course, if your hearing protection is so effective that you can’t hear what’s going on around you, that’s an even bigger safety concern. A guy on the firing line who can’t hear instructions or range commands is a danger to himself and everyone else around him. And that’s where electronic hearing protection has a huge advantage. Electronic earmuffs like these have microphones on the outside that transmit to speakers on the inside that allow the user to hear normal sounds, but the signal is cut off when it detects sounds that would be dangerously loud.

Today I’m continuing a little mini-series I started last week about the range gear I use and recommend. For several years, the hearing protection I used was a set of these Howard Leight Impact Sport electronic earmuffs. These are really popular because they’re inexpensive, but they work pretty well most of the time. I like to keep a couple of extra pairs around to use as loaners, so I’ve owned 5 pairs total, and the electronics quit working on two of those after a couple of years of regular use. So they aren’t the most durable units on the market, but I still think they’re a really good value for the price, especially if you’re only using them occasionally.

A while back, I thought about upgrading to something a little better, but as I researched it, I wasn’t really impressed with the noise reduction rating of most of the higher-end earmuffs. Around that same time, out of the blue, I was contacted by someone from Etymotic asking if I wanted to try out a pair of their electronic earplugs. I agreed to take a look at them, and a year and a half later, I’m still using them every time I go to the range. 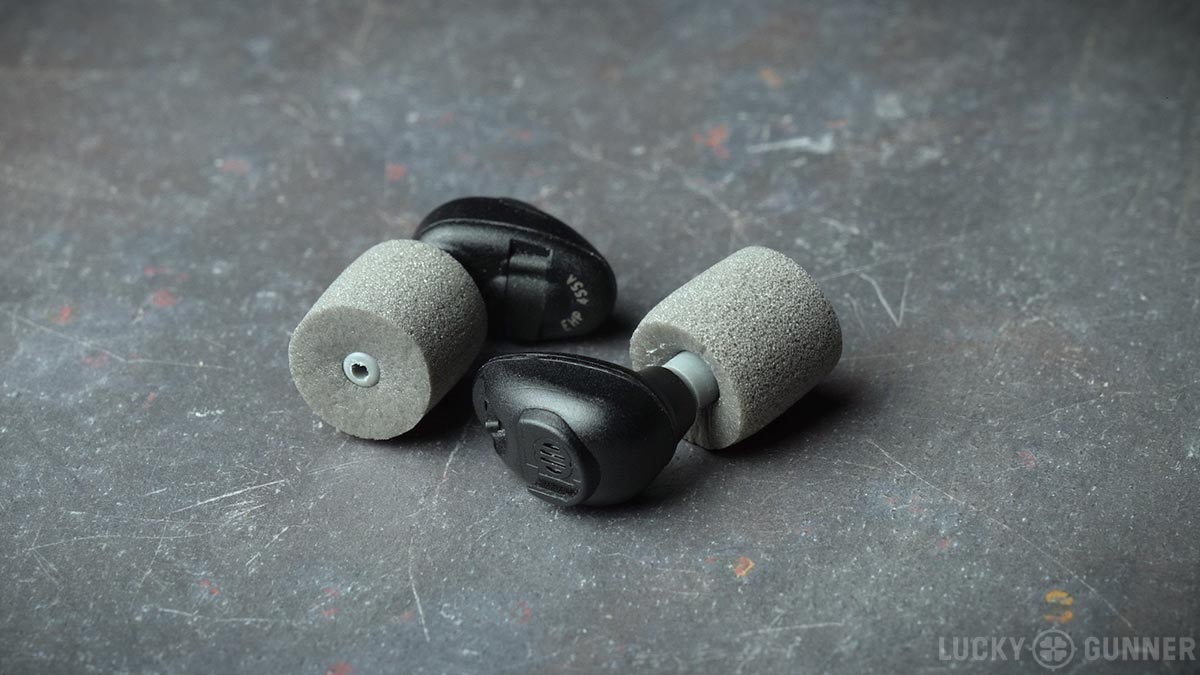 These are the Etymotic GSP-15 Gunsport Pro earplugs. The MSRP is $299, which is in the same price range as most of the nicer earmuffs I had been looking at. Earplugs have a lot of advantages over earmuffs when you’re shooting. First, they are much more comfortable in the summer heat. Earmuffs and 90% humidity in August make a really gross combination. Earplugs also don’t interfere with shooting glasses and they don’t get in the way as much when you’re shooting long guns. Depending on the gun, even low profile earmuffs like the Impact Sport can prevent you from getting a good cheek weld on the stock. That’s not an issue you have to worry about with earplugs.

In the time I’ve been using the Gunsport Pro earplugs, they’ve been exposed to sweat and rain and they’ve been left in the car all day in the summer. I’m not advising you to abuse them like that, but for what it’s worth, I haven’t had any problems with the electronics on these and the only maintenance I’ve done is to change out the batteries.

The noise reduction rating on the Gunsport Pro earplugs is 25, but that’s really dependent on how well the earplugs fit in your ears. They come with six different types of ear tips but for shooting, the manual recommends using one of the two pairs of foam eartips. I had pretty good results using the larger foam tips, but just like any foam earplugs, they are a real pain to take in and out of your ears, especially if you want to get a good seal. Other than that, I was really happy with these earplugs. The sound quality is good and I can stick them in my pocket when I’m not using them. I really did not want to go back to earmuffs, but I was also not completely satisfied with the foam eartips. So, I asked the people at Etymotic if there was a way to get custom molded eartips for the Gunport Pros. They warned me that it might be a little expensive, but I wanted to try it anyway. So Etymotic referred me to a local audiologist who created an impression of my ear. The impressions were then sent to another company, Sensaphonics, to make the custom eartips. The audiologist got the eartips a couple of weeks later, and I had to go back to make sure they fit properly and then I got the bill… which ended up being a little over $300. That was for the custom eartips and for the audiologist to make the impressions, and I also got a hearing exam out of it. 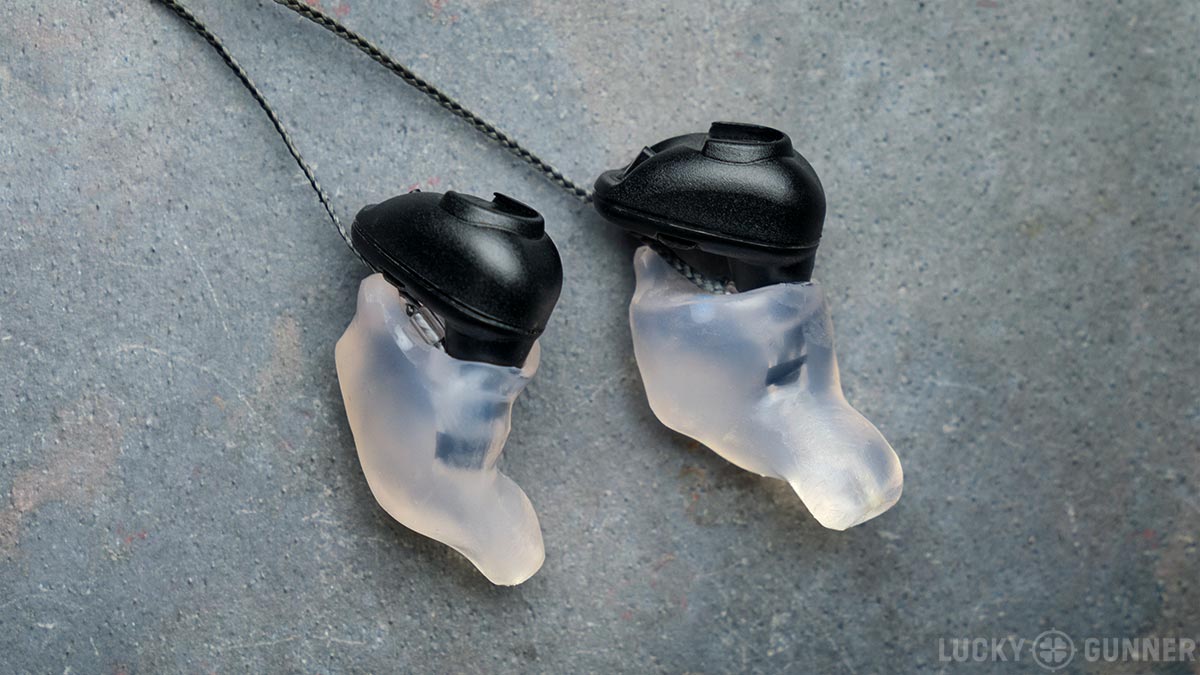 These are the earplugs with the custom molded eartips. As you might imagine, they fit my ears perfectly. It took a little while to get used to them, but now they are very comfortable to wear for long periods of time. I don’t know what the exact noise reduction rating is, but they seem to block out quite a bit more noise than the foam eartips I was using and they are much easier to get in and out of my ears. So the Gunsport Pros with custom eartips is definitely not a cheap option, but in a lot of ways, this is like the holy grail of hearing protection — comfortable, low profile electronic earplugs with good noise reduction, and good sound quality. 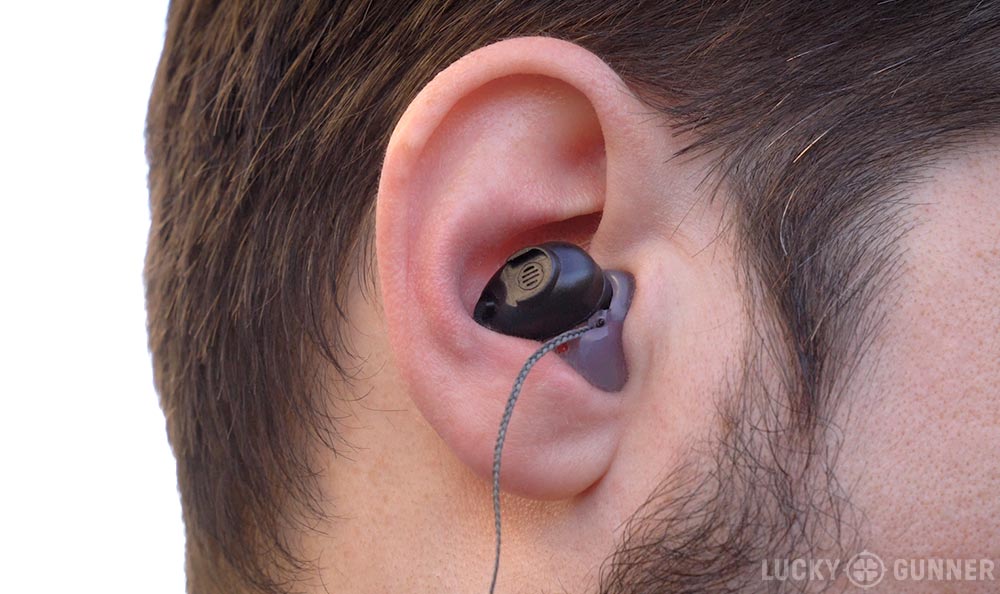 Now, aside from the cost, I don’t think these are going to be an ideal solution for everyone. They work really well for me because 90% of the shooting I do is outside with handguns. Centerfire rifles are louder, and indoor shooting ranges are much louder. Even though these provide a good amount of protection, I don’t think it’s always enough. In louder shooting environments, you should really double-up on hearing protection anyway and wear earplugs and earmuffs. Fortunately, the Gunsport Pros are small enough that most earmuffs will fit over top of them.

I don’t know if these are good for your situation, but overall, I’ve been really happy with the Etymotic earplugs. I think they make life at the range a little easier, but you don’t have to spend hundreds of dollars to protect your hearing. There are plenty of affordable options out there, so there’s no excuse for not wearing ear protection every time you go shooting. Because once your hearing starts to go, you can’t ever get it back.