At the start of our series on traditional double action/single action semi-autos, my plan was to try out a few of the most popular DA/SA platforms and offer my impressions on each. There really aren’t that many options to choose from, especially if you limit the choices to compacts suitable for everyday carry, so I didn’t think it would take too long to go through all the major contenders. Well, I was wrong. I started with some of Beretta’s offerings, and basically got stuck there for a few months, because, quite honestly, they were really working out well for me and I wasn’t in any hurry to change over to something new. On top of that, I wanted to make sure to cover some of the “software” issues related to shooting DA/SA as well as other self-defense topics rather than put out a long string of gear reviews.

For the time being, I will most likely be sticking with Berettas for carry and practice, splitting time between the PX4 Compact, Wilson Combat 92G Compact Carry, and full size 92G. That said, I’m still making room to try out some other double actions, though probably spread out over a longer period of time than I originally intended. Sig Sauer’s classic P220 series was next on the list of pistols to evaluate, and I went straight to the top shelf their product offerings with the Sig Sauer P229 Legion Series. Detailed video review below with full transcript following.

The Sig P229 Legion is one of three pistols that Sig Sauer introduced last year with the launch of the Legion series. These are factory semi-custom variants of classic Sig pistols with some premium features you don’t get on the standard models. Some of these features include enhanced front strap checkering, an undercut trigger guard, G10 grips, a modified action and trigger, low profile slide release and decock lever, and high visibility night sights. This is the 9mm version of the P229, but it’s also available in .40 S&W and .357 Sig. 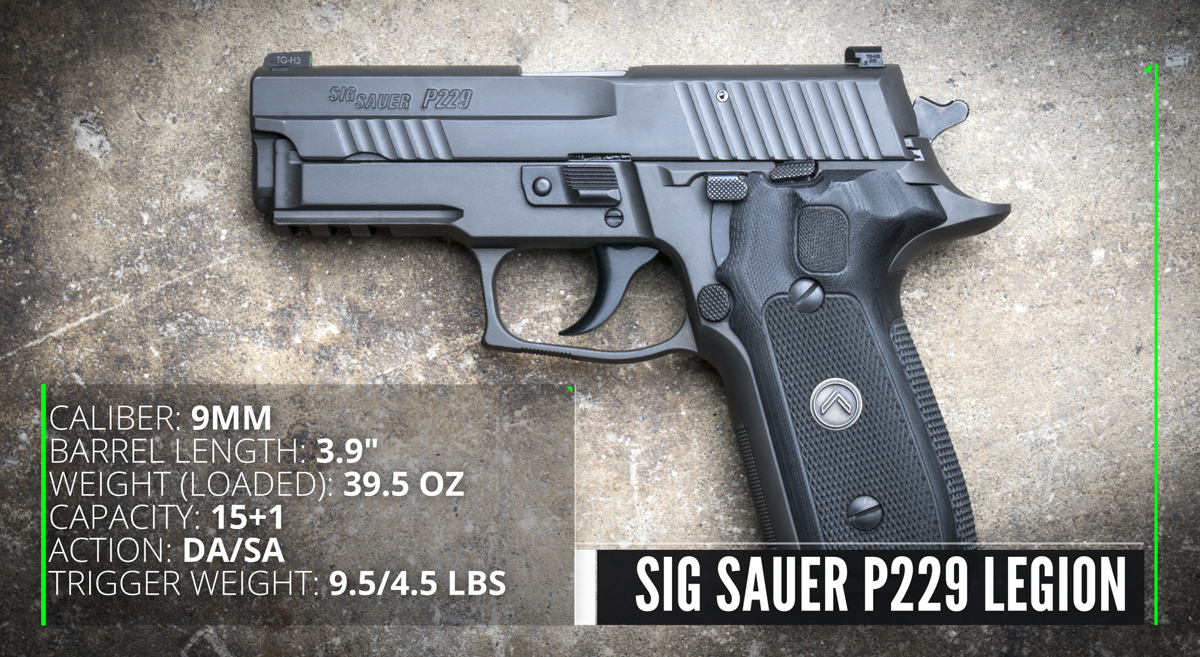 Since I started my experiment with traditional double actions earlier this year, most of the guns I’ve been talking about here have been Berettas. So far, I definitely have a preference for Berettas, but there are some other good options. Sig Sauer is every bit the equal of Beretta in terms of overall quality and reputation and the P229 Legion is supposed to represent the best of what they have to offer right now for a double action carry gun.

These guns have been out about a year now, so there have already been plenty of other reviews and videos and online discussions, and one of the topics that keeps coming up is whether the Legion series is worth the added cost. This gun is roughly $300 more than the standard P229, so the Legion thing adds about 33% to the price tag.

That by itself has turned some people off, but what doesn’t help matters much is that Sig’s marketing for the Legion series is… a little over the top. They made a big deal out of this whole warrior lifestyle thing and the gun comes with a membership to the exclusive Legion club. Honestly, I think Sig might have underestimated the level of cynicism in the shooting community because it seems like a lot of people got the impression that “Legion” is just code for “overpriced”.

I can see why people would think that. It might cost a lot more than $300 to add all of these extra features to a standard Sig, but if you don’t really need or want those features, the Legion guns could seem like a ripoff. But I’m going to argue that, in spite of the self-indulgent marketing, the Legion pistols actually have some very well thought-out features that some people are really going to appreciate. 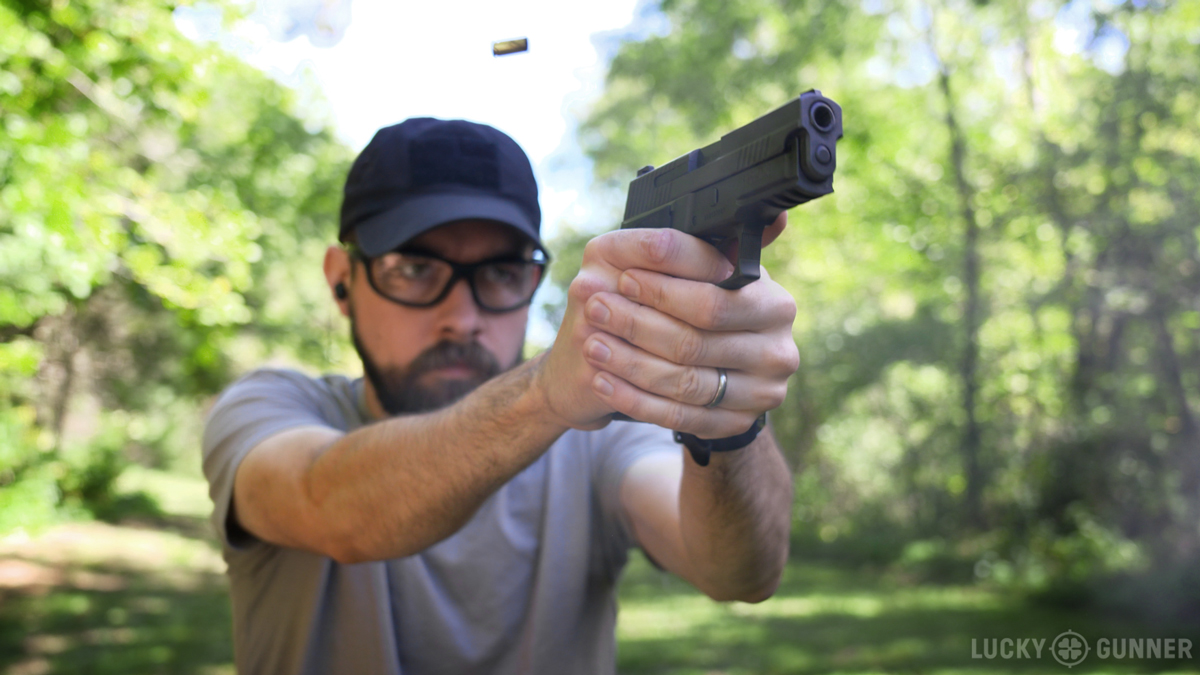 I’ve put about 1000 rounds through this Sig over the last few weeks, including my weekend at the Rangemaster Advanced Instructor Course in Texas. I’ve shot other double action Sigs in the past, but this is the first one I’ve given a serious evaluation. Coming from the Beretta pistols, right away one of the things I missed is the slide-mounted decocker. A lot of people dislike that Beretta design, but you can’t decock a Sig without breaking your support hand grip — I would prefer to have the ability to decock when I come off target and keep the gun at a low ready without disrupting my grip. So for me, that’s one small advantage of the Berettas.

Another one is that in my hands, the double action trigger on the Sig feels like it breaks just slightly farther back than on the Beretta. It’s not a major disadvantage on the P229 Legion, because it has a very smooth trigger, but I did have to take more care with my trigger press on targets beyond about 20 yards.

In all other respects, the trigger on this pistol is outstanding. The trigger itself is the Grayguns Intermediate Adjustable trigger and it also has the Sig short reset upgrade and a polished and tuned action. What this translates to when you’re actually shooting is easier trigger manipulation on strings of rapid fire. When you combine that with modest recoil and a bright green daylight-visible front sight, it shouldn’t take much for an experienced shooter to get quick, accurate hits with this pistol.

Bench rest accuracy was also really impressive. I fired some five-round groups at 25 yards and got the best results with 124 grain Federal HST and 115 grain Speer Gold Dot, and accuracy with everyday full metal jacket practice ammo wasn’t bad either. 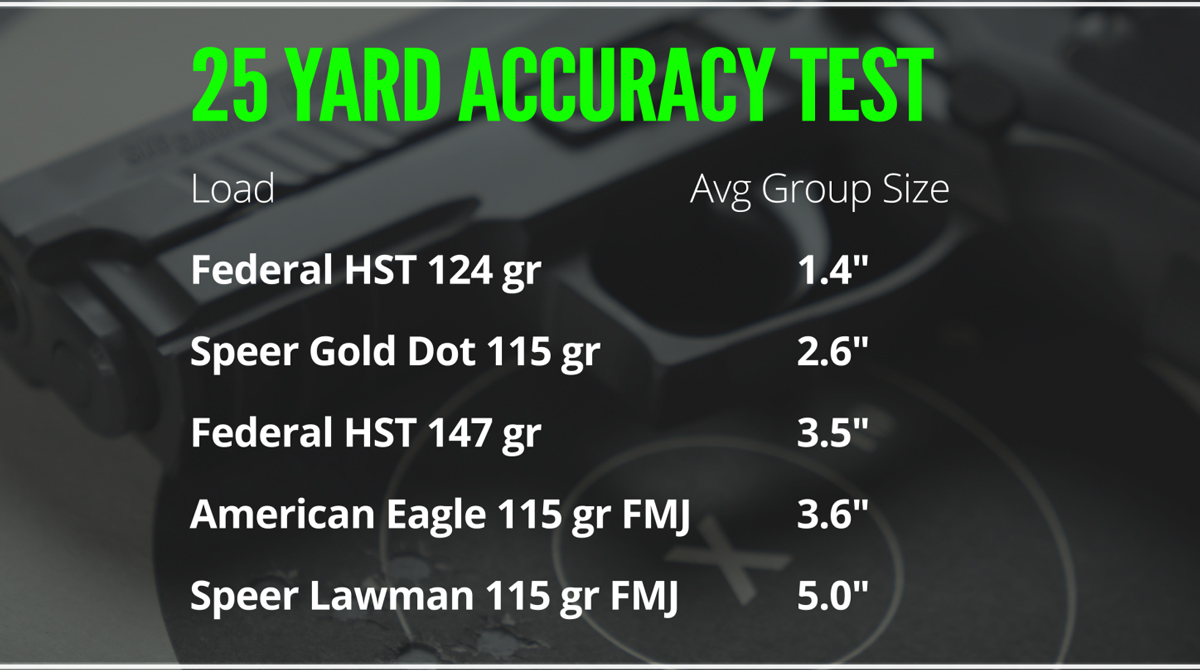 Using this gun at the instructor class, the checkering on the front strap and the G10 grips offered a noticeable advantage when I was shooting with sweaty hands all day in the Texas summer heat. But I think a more useful upgrade is the undercut trigger guard. It allows for a slightly higher grip on the gun, and it’s also helpful in getting a consistent full firing grip before drawing it from the holster. That little recess gives you some tactile confirmation that your hand is up as high as it can go on the front strap. 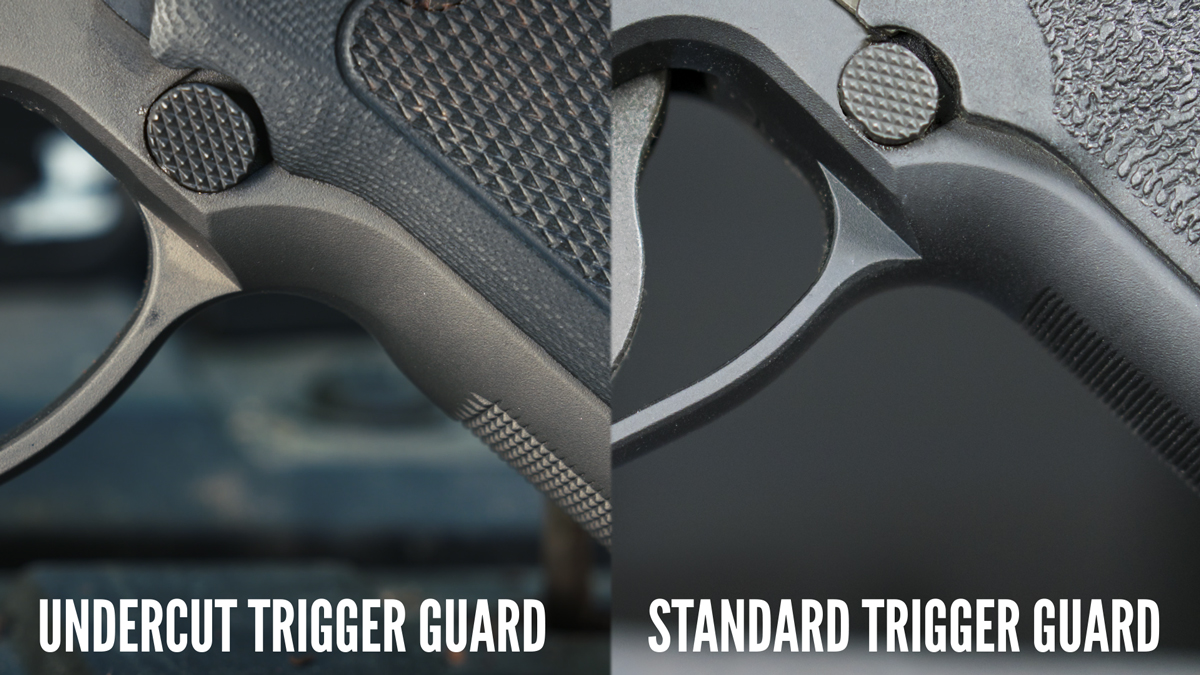 The low profile slide lock helps to prevent an issue that’s common with the classic Sigs, where the strong hand thumb inadvertently rides the slide lock which prevents the slide from staying open on an empty magazine. I’ve had that issue with Sigs before, but it was not a problem with the P229 Legion. One side effect to watch out for is that the smaller lever is a little bit tougher to activate on a slide lock reload, so you might have to practice that until you get the hang of it, or just use the overhand rack method to release the slide.

The Rangemaster Instructor course was a great place to try out this pistol because almost all the shooting we did was either a test that was being scored or a practice run for a test. So I had plenty of opportunities to find out if this gun was going to do what I needed it to do. For the most part, I didn’t feel at all handicapped by using the 229 even though I hadn’t spent much time with it before the class. At the 25 yard line, I would have been slightly more comfortable with a Beretta, but at more typical self-defense ranges, the P229 Legion was a fantastic performer. The scores I got in that class are a pretty honest indication of where my skill level is right now, and I don’t think I could have done much better with any other gun.

So, I like the P229 Legion, but is it worth the extra cost? Well, really, that’s tough for me to say since I haven’t had a ton of prior experience with other double action Sigs. Whether or not these features are worth paying a price that’s a third higher than normal is going to have a lot to do with personal preference and your budget. But I will say this — if you can’t shoot now, dropping 1200 bucks on a Sig Legion isn’t going to change that. Some people have money to burn and they just want a nice gun for the sake of having a nice gun, and that’s fine. But if your resources are more limited and you’re hoping this gun is going to help you shoot better, these little extras and enhancements aren’t going to make a bit of difference unless you can already turn in a respectable performance with a plain stock pistol.

If you are a serious shooter and you like double actions, then you probably already have a good idea of whether or not the features that Sig is offering on the Legion series are things you might benefit from. For people in that camp, I feel comfortable saying that most of these features are really well executed. Personally, if I were going to invest the Sig platform, I might consider a Legion pistol just to get that undercut trigger guard — I really like that feature. The finish isn’t holding up quite as well as I would like, but otherwise, this is a pretty impressive effort for a factory gun with some upgrades that make a lot of sense.