In the last installment of my shotgun commentary discussing myths of the 12 gauge shotgun, number one on the list of myths was that they do not need to be aimed. This is quantifiably false, and to help address how to be more efficient at aiming and hitting with a shotgun, we will look at the positives and negatives of various sighting systems for shotguns.

The first is the simple bead sight. The biggest benefit is that they are, well, simple. They are easy to mount (the majority of shotguns come with them already installed) and easy to use under stress. In an indoor environment, they are actually usable as long as you can see the sight. Here is where the negatives arise. The chances of having the perfect environment of fairly close range and good light is leaving a lot to chance.

I found out the hard way. When Murphy drops in, you may end up in the situation I ran into with my first actual use of the 12 gauge against real human predators. I had almost no light and the shooting started at around 5 yards and ended at 47 yards with another threat at over 50 yards. The only thing worse would have been no sights at all. That said, combining the bead with a Surefire forend light to help the low light situation, I have done a ton of high risk searches and encounters with a bead sighted shotgun within the range where they are fast and effective. The bead sight is essentially the bare minimum, and you will get bare minimum performance from them. A good upgrade would be going to a single tritium type bead or some other higher visibility sight.

The next step is rifle sights. The Benelli Super 90 shotguns we used for SWAT had these, and they actually worked very well in conjunction with a flashlight for low light situations. I also found them to be very good with slugs at practical ranges. I could shoot 50 yard cloverleaf groups with these sights and Brenneke slugs.

One of my current favorite shotgun sights is the XS Express style sight which uses a V-notch in the rear in place of the notch on traditional rifle shotgun sights and their tritium “Big Dot” sight in front. This mimics a type of sight that is used for hunting dangerous big game in Africa. I consider armed humans as the ultimate dangerous game, and this sighting system works great for most of the types of encounters where a shotgun is the gun of choice.

Next up, the Ghost Ring. I am a big fan of these. By using a large aperture mounted to the rear of the receiver and a narrow blade or post in front, we get a sight that is both fast in close and capable of good precision to longer distances with slugs. In ban states or places where rifles are heavily restricted, this is a very good option to give you better long range precision and capability at distances where a rifle would be a better choice. 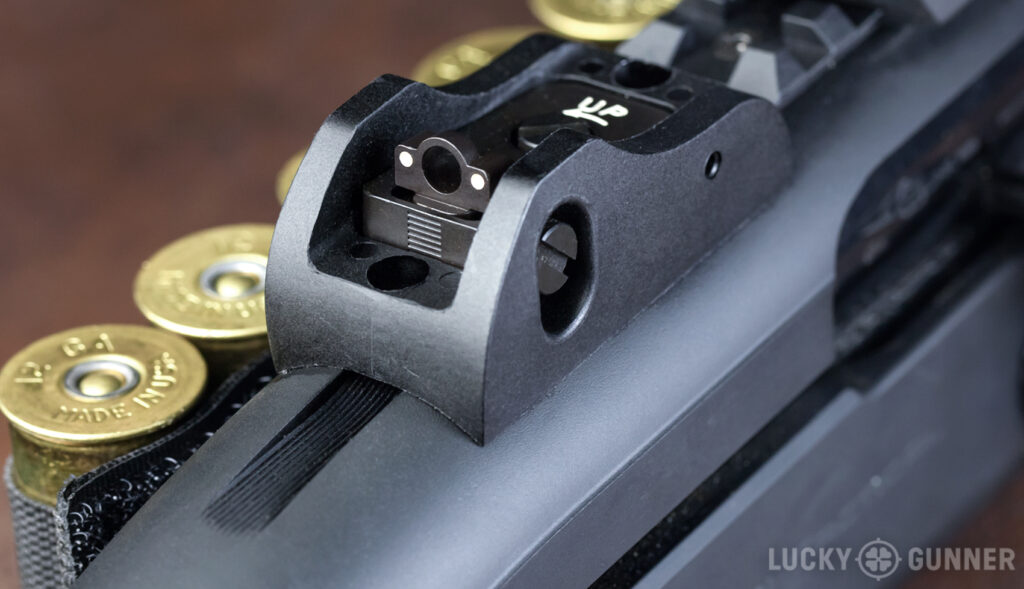 The negatives are that they can be a bit more fragile than other systems, and they require a mount on the receiver and a shotgun dedicated to their use. For a long time ghost rings were my first choice. Today, if you do not have a gun actually set up for ghost rings, I would recommend the XS Express Big Dot set up mentioned above on a dedicated barrel that can work with a smooth receiver.

The ultimate shotgun sighting system is the modern red dot optic. I am heavily biased towards Aimpoint here due to battery life and ruggedness. Disclaimer: I do Pro Staff work for Aimpoint, but I was running them on my shotguns long before working with the company. The first Mil-Std-1913 rails ever put on a shotgun by shotgun gunsmithing specialist Hans Vang were for me and a co-worker, and I was running an Aimpoint Comp M2 with it. I believe I was one of the first people to really use a red dot on a shotgun extensively in a hard use duty environment with a 12 gauge.

LtCol USMC (Ret) Freddie Blish, the current owner of Robar Guns, was a very early proponent of using the Aimpoint Micro series sights on the shotgun when they were released. This is the gold standard today. I am currently using an Aimpoint H2 micro sight on my home defense and first line Vang Comp Remington 870. I know others who have also had great luck with the Trijicon RMR. The Aimpoint Micros and the Trijicon RMR have proven they can handle the recoil and rough handling usually associated with a hard use shotgun. There are other sights out there that have good potential, but I do not have enough experience with them on either my personal guns or students guns to endorse them. 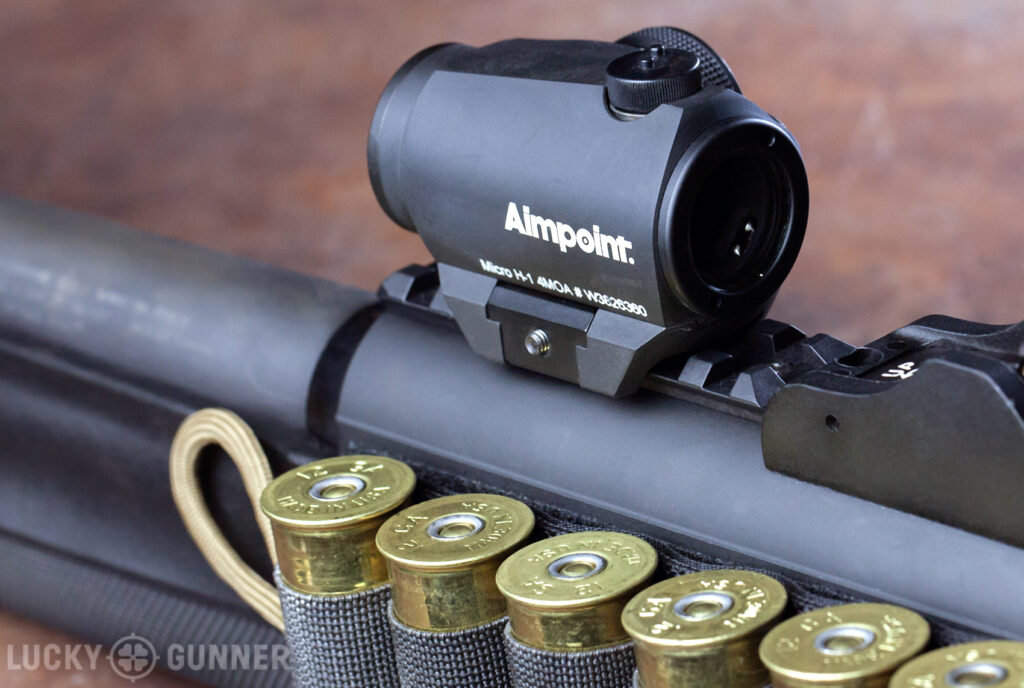 The modern military grade red dot sight is a huge asset for the defensive or fighting shotgun. First, they are easy to use under stress. You shoot them with both eyes open and focused on the target. The dot will transpose over what you are seeing. If lethal force is required, it is simply “dot on target”, and press the trigger. They work in all lighting conditions, and you do not need to see the dot perfectly centered in the tube. Even with a poor cheek weld on the stock, if you can see the dot on the target and you press the trigger correctly, you will hit. On movers, you simply drag the dot through the target and press.

Nothing is closer to cheating in a fight (my idea of a “fair” fight is clubbing baby harp seals… cheating is winning in this realm) with a felon or other deadly threat than placing a dot where you want an impact and sending a .70 caliber one ounce slug or full payload of multiple rounds of buckshot into that precise spot. The goal is immediate incapacitation with as few rounds as possible. This is how you get there. For those living in places where the four legged animals are dangerous, a red dot equipped 12 gauge with slugs is a very viable defensive set up. Do some research before purchasing if you intend to stake your life and the lives of your family members on a piece of gear. There are tons of what I call “hobby” level accessories out there. I use only professional level equipment on the guns I depend on for the defense of myself and others. 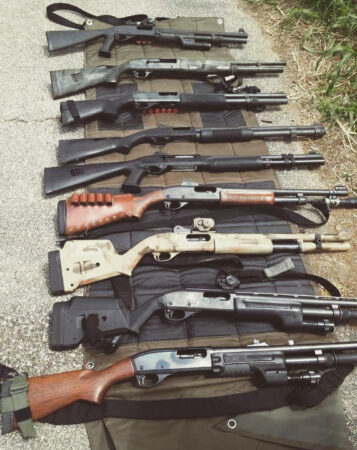 I have always strived to find what works, and I have found out the hard way that a bead sight shotgun in a dynamic, highly fluid fight at 2:00 AM in near total darkness is not a good option. It took many years before I was able to get our department shotguns fitted with tritium ghost ring sights and good flashlights. Until then, I brought my own gear to work; a forend with a light and a vent rib barrel with a more visible sight that I would put on whatever gun I was issued that night. Later, that barrel received the Vang Comp modification and would deliver a full load of 12 gauge issue buckshot into a head at 25 yards. It worked. The use of a high lumen flashlight made the bead more visible. You can work with a bead, but you have to be able to see it and may need to add some other enhancements in barrel treatments, ammunition, or both to get the best performance.

By the same token, investment in a good red dot will greatly improve the capability and ease of use of the shotgun under stress. This will all come down to weighing cost and benefit in your own situation. In all honesty, the shooter who uses a simple bead sight or XS Express sighted shotgun in conjunction with a good shotgun class, several cases of training ammunition, and a regular personal training program will likely be in better shape than someone who buys a top of the line gun and red dot system but then never trains or practices with it. Remember, practice and high quality training will always beat “cool gear”. The best bet is a good balance of high quality gear and proper training and practice to maximize the benefits of that quality equipment.