In today’s Q&A video, we explore some of the best options for double action/single action and double action only pistols for concealed carry and why there are so few of them.

Details in the video below, or scroll down for the full transcript.

Hey everybody, I’m Chris Baker from LuckyGunner.com. It’s time for another Q&A video.

Thanks so much for your well-reasoned reviews, and, yes, my next ammunition order will be through LuckyGunner.com!

Like you, I have a fondness for snubby revolvers and double action only or double action/single action semi-autos. My question is, however, what current-production DAO and DA/SA semi-autos do you recommend for concealed carry? It seems like most pistols in those categories are of the larger service type, but my handgun needs are strictly concealed carry.

Ed, the short answer is that you’re probably not missing anything. Most double action pistols are pretty big. But you came here for the long answer, so here we go…

Let’s start with a Cliff’s Notes version of the “why” behind DA/SA for those of you who might be new here.

It all boils down to safety and risk management. We would all like to think that unintentional discharges only happen to people who are untrained or stupid. But the truth is that any one of us can become distracted at the wrong moment or fatigued after a long day at the range. We might fail to notice a broken belt clip or a shirt tail that sneaks its way into the trigger guard in our holster.

Most striker-fired pistols have no manual safety and triggers around 4-6 pounds with a short length of travel. Thanks to Glock’s persuasive law enforcement sales team in the 90s, that is now what we generally regard as “safe.” But I’m not convinced. Those guns leave less room for error than I’m comfortable with.

The first shot on a DA/SA pistol has a trigger around 6-10 pounds. They also have an exposed hammer you can pin with your thumb to completely prevent movement of the trigger when holstering. For me, those two features provide a compelling level of risk mitigation and very little, if any, negative impact on marksmanship. And, of course, after that first shot, I’ve got a trigger that’s actually lighter than most striker-fired pistols. For a more casual shooter who is not going to develop a habit of decocking a DA/SA, a light double action only might, theoretically, make more sense.

So, some of our viewers have heard me and other advocates of double action pistols talk about that stuff and we’ve won them over. Like Ed, they’ve said, “yes, I’m on board. This sounds great. Now what gun should I get?” And that’s where we run into a problem. Your options are very limited.

As far as double action only semi-autos, the market has spoken and it doesn’t want them. The Sig P250 had a lot of promise, but sales were not great and they were discontinued. 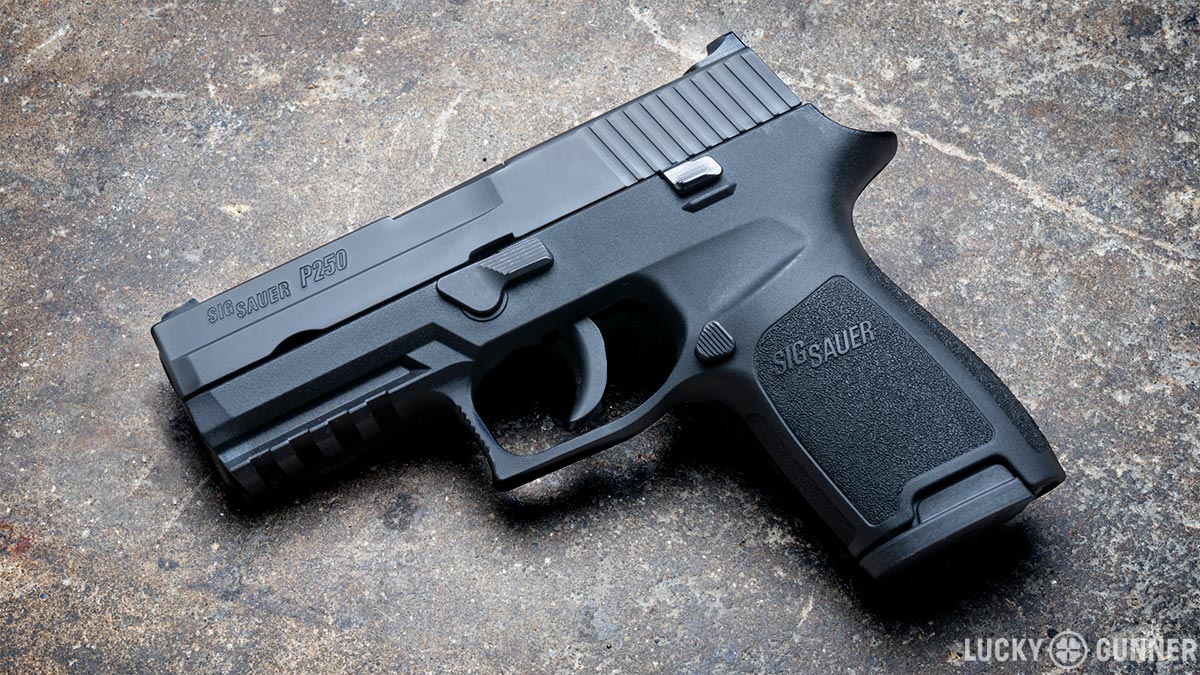 Among the few DAO hammer-fired semi-autos still in production, most are pocket pistols or budget guns of questionable quality. For a DAO pocket pistol, the Keltec P32 and the Smith & Wesson Bodyguard would be at the top of my list. However, I would not recommend either of them for a beginner, or even intermediate level shooter. They are challenging guns to master.

That leaves us with DA/SA pistols. At least ten major gun companies, by my count, are still making DA/SAs. I put together a chart to give you a basic overview of options. I may have missed a couple that are still in production and included some that are not. However, these models all have live product pages on the manufacturer’s websites as of this week. 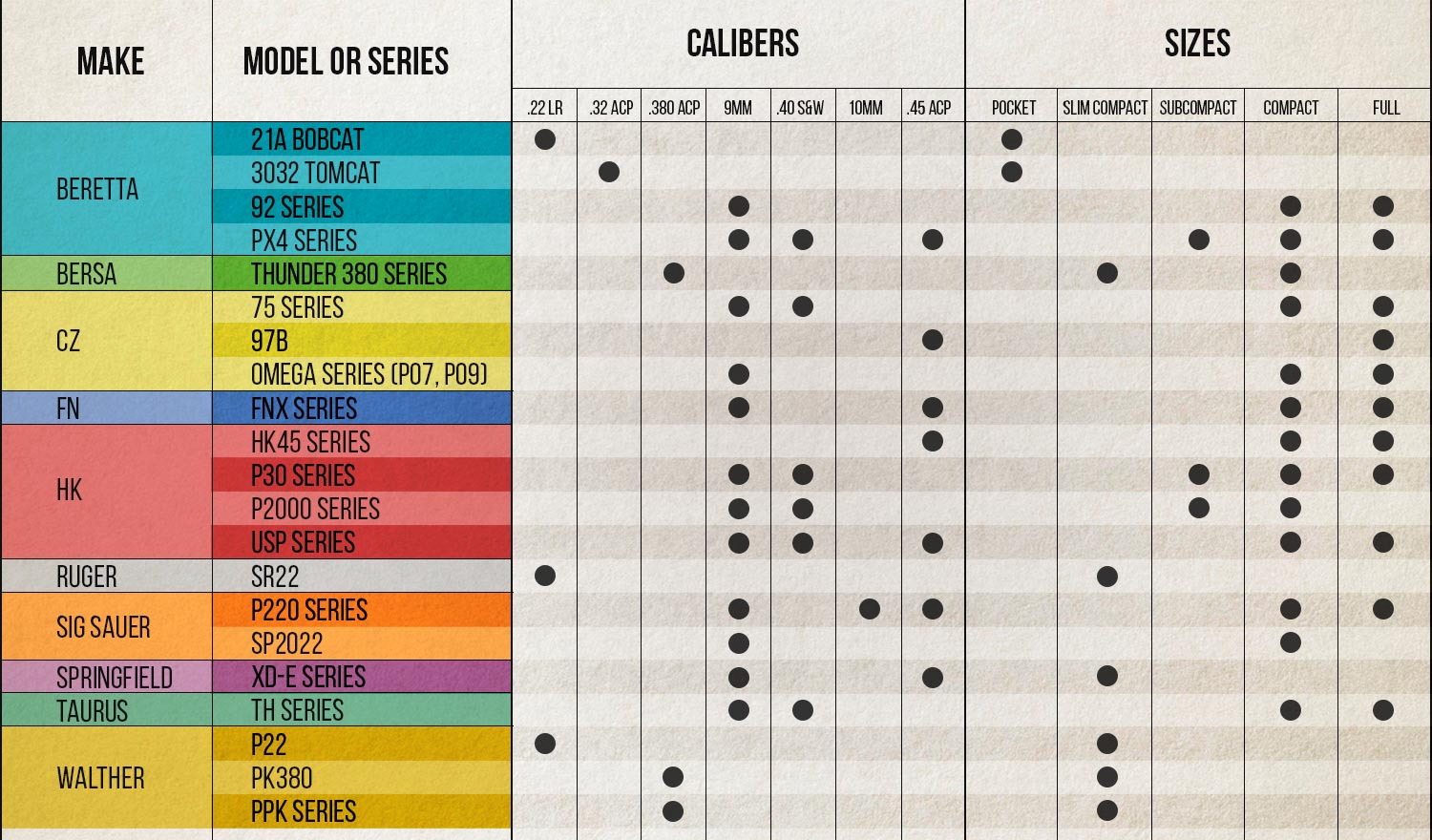 Like Ed pointed out, most of these are full-size service pistols, or compact and subcompact variants of those guns. If I had to pick the best options on this list for concealed carry, I’d go with a few polymer-frame compact models. The subcompact variants are usually not any easier to carry than the compacts, and they’re awkward to draw and shoot because of the stubby grips. So with that in mind, my top picks would be the Beretta Px4 Compact Carry (no surprise there) and the HK P30, with an honorable mention for the CZ P07.

Those are all excellent pistols. They are as good or better than any striker-fired pistol of comparable size. But a lot of people, myself included, really don’t want to carry that much gun all day every day. I carried the Px4 Compact regularly for a year or two anyway, only out of a lack of smaller DA/SA options, and it was a pain. 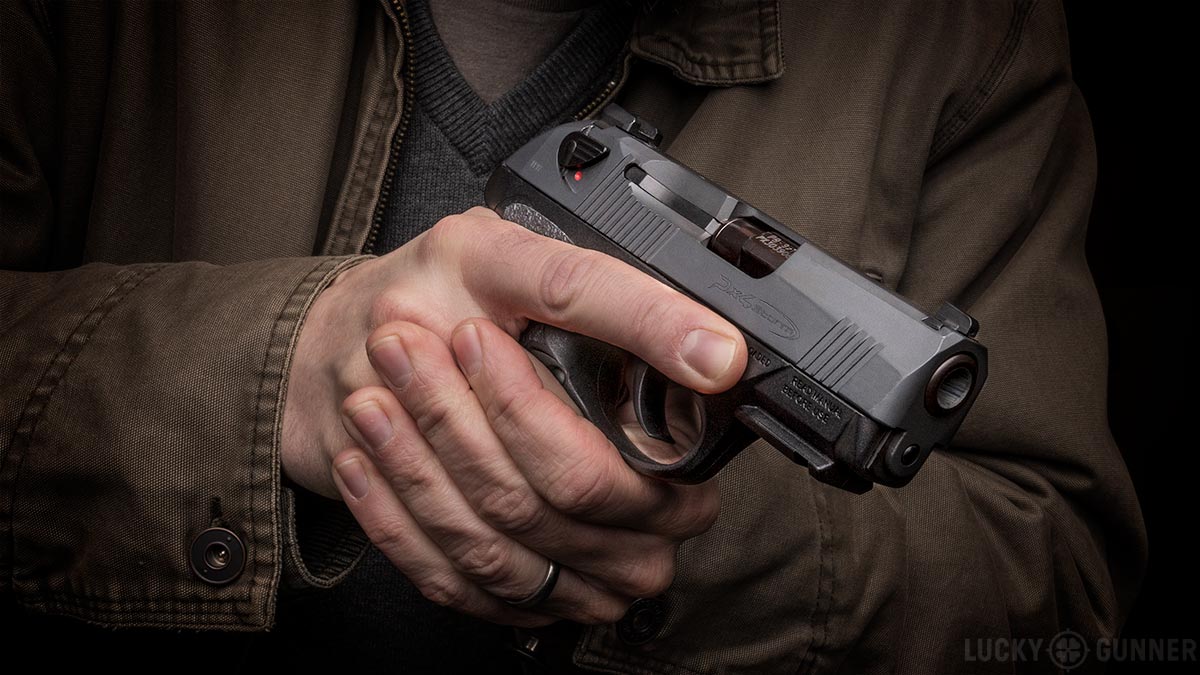 I would much rather carry something the size of a Smith & Wesson Shield or Glock 43 or the Springfield Hellcat, or any of the other dozens of slim polymer 9mm pistols that have come out in the last several years. These are all less bulky and much easier to carry than guns that were derived from service-sized pistols. When people ask me for DA/SA carry gun recommendations, they’re usually hoping for something in that size category. Unfortunately, that is not a thing.

Nearly every major gun company makes at least one slim 9mm. Only one of them is double action/single action. And it’s bigger than any of the others.

Springfield Armory released the XD-E in 2017. It’s an 8+1 single stack. They offer it with three different barrel lengths. Whatever the designers had to do to fit the double action mechanism in there forced the gun to be relatively tall, which adds significant bulk compared to other single stacks. I don’t have any range time with an XD-E yet, but I have handled one and I was really surprised at how large it felt, even after seeing the dimensions on paper. 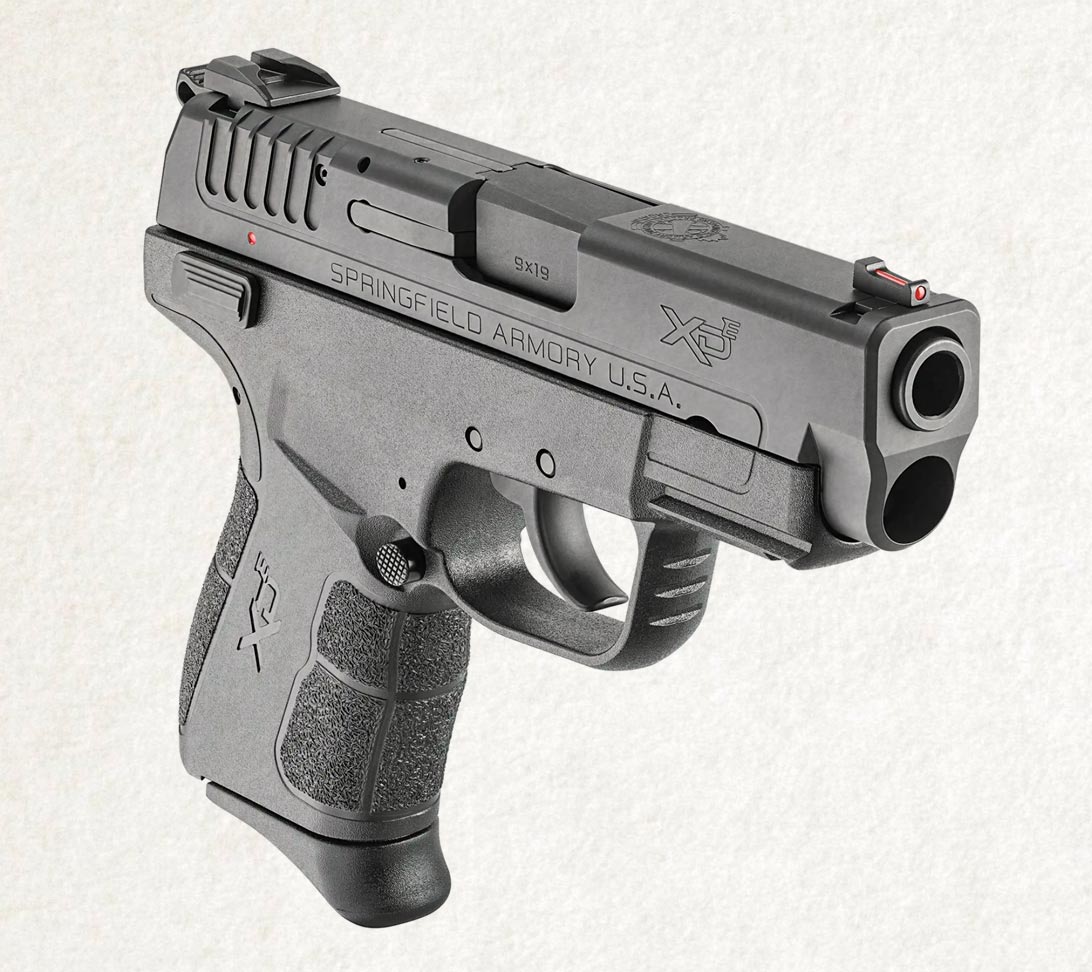 I’m not saying it’s a bad pistol or that it’s not an option. I’ve actually heard pretty good things about it, other than the size. But as to whether it’s noticeably easier to carry than an old-school double stack compact, I don’t really know.

Langdon Tactical does a custom version of the XD-E with some nice mods. If you guys would like to see a review of that, let me know in the comments, and I’ll try to make it happen.

Looking beyond the 9mms, you do have a few small DA/SA options if you’re willing to take a step down in caliber. But even setting aside the caliber, none of them are exactly outstanding pistols. They all feel like a major downgrade compared to similar guns that are not DA/SA.

The Past and Future of DA/SA

Ironically, many years before the current demand for slim 9mm pistols, Smith & Wesson made a slim-ish subcompact DA/SA called the CS9. Some of you might remember a few years ago that I carried a Smith 3953 for a while. That was the DAO version of the 3913, which was the big brother of the CS9. 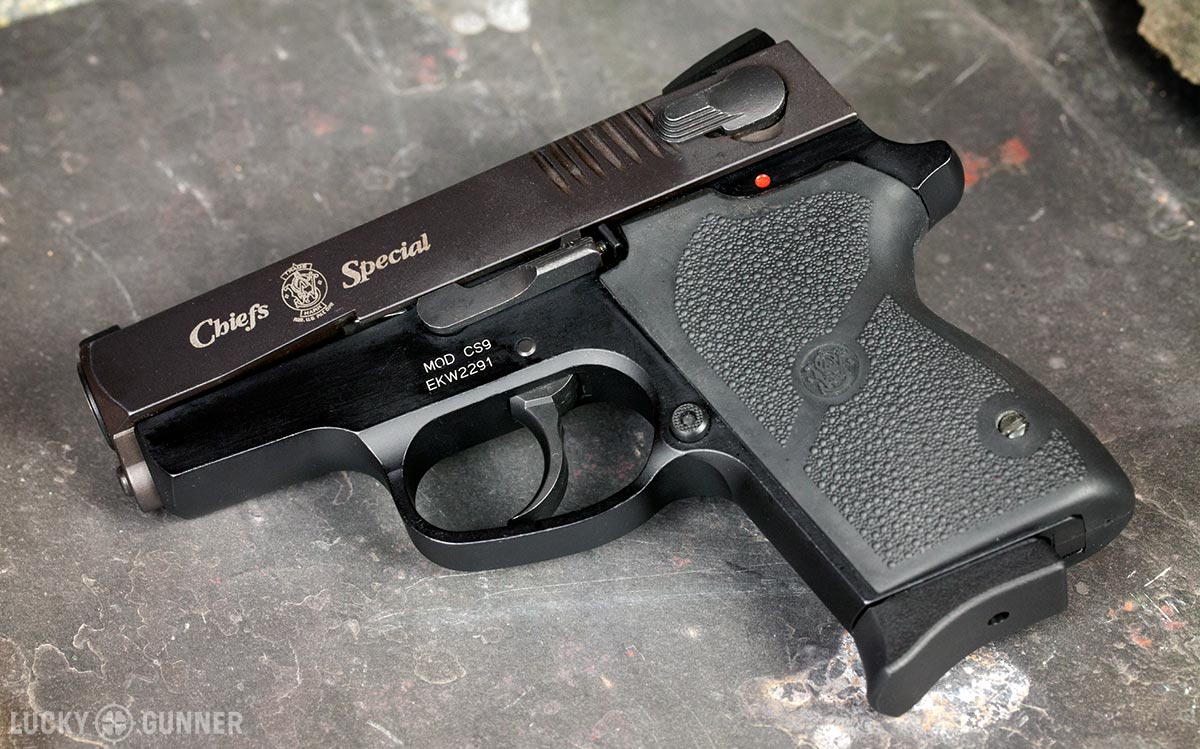 It was a little bigger than a Glock 43 and significantly smaller than any 9mm DA/SA made today. They were discontinued sometime in the mid-2000s. You might be able to find one used if you look hard enough, but good luck finding mags and holsters for it.

So at this point, I’m basically resigned to the fact that the future of DA/SA is looking pretty grim. I still prefer them in theory, but I can’t recommend them without the major caveat that hardware selection is going to be a headache.

Fortunately, double actions are not the only pistols that offer additional safety features. Plenty of striker-fired and single-action only pistols come with manual thumb safeties. I’ve found that a double action trigger is less likely to get in my way on the first shot than a manual safety. Beginners don’t always do well with them. But, personally, I’m okay with a thumb safety if it’s well-designed.

I’ve really been enjoying the Sig P365 XL for the last year and a half or so. Despite a mediocre thumb safety, I can shoot it about 95% as well as the Px4 Compact. And it’s smaller and 30% lighter and has some other bells and whistles I’ve come to appreciate.

If I was better at shooting Glocks, I would also consider a Glock with a Striker Control Device. I did a video on this a while back. It’s an aftermarket part that replaces the slide plate and protrudes from the rear of the slide as you press the trigger. If you pin the plate down with your thumb, the trigger can’t move. It provides a lot of peace of mind when you’re holstering the gun

I wish I could suggest some better options. If you’re looking for a modern, slim, easy-to-carry pistol, you’ve got more to choose from now than we could have ever imagined… unless you also want it to be DA/SA. Even so, I hope you guys found some of that helpful. A very wise friend of mine from England once said that “Words are very unnecessary. They can only do harm.” I think that was his way of saying “never read the comments.” He might have been onto something there. But you can still subscribe to receive our email updates and of course, buy some ammo from LuckyGunner.com.