Today, we’re looking at a shotgun reloading technique called the violin reload. A popular technique among 3-gunners for twin and quad loading, it can also be adapted for a defensive context for strong-hand loading of single shells. Once you get past the initial awkwardness, the violin load may be one of the overall best methods for stuffing shells into a shotgun tube

Hey everybody, I am Chris Baker from LuckyGunner.com and today I’m going to show you a method for reloading a tube-fed shotgun called the violin reload (or violin loading).

There are tons of different ways to load and reload a shotgun. They’ve all got their strengths and weaknesses. For most methods, you use your support hand to reload and either keep the shotgun mounted on your shoulder, bring it in under your arm, or flip it upside down. This one is a little different.

Bring the gun up on top of the shoulder and rotate it 90 degrees so it looks like you’re holding a violin. The loading port should be facing away from you. Hang onto the forend with your support hand and use the strong hand to do the actual reloading. Just pull the shells from your sidesaddle, stock-mounted shell holder, belt pouch or whatever and slide them into the tube. 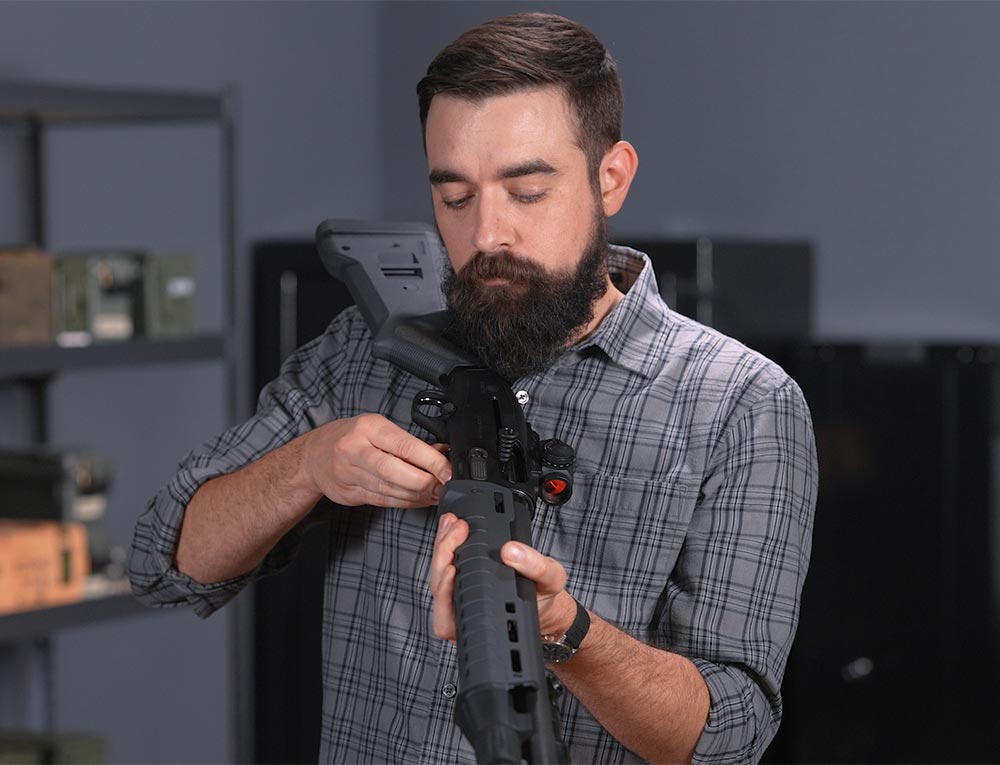 This is a common position for twin loading and quad loading in 3-gun matches. Those techniques take a lot of practice to nail down. They work best with competition-specific guns and gear. But for loading one shell at a time, I think this position might be easier to learn than the more typical support-hand reloading techniques. It should also work with just about any tube-fed shotgun out there.

If you’ve run the gun completely empty and you need to load the chamber, for right-handed shooters, it’s pretty simple. The ejection port is right there, so you just drop a shell in and close it up, or hit your bolt release on a semi-auto. With a pump, when you drop the shell in, cup your hand over the ejection port and hang onto the receiver so you can run the action home without pulling the gun off your shoulder. 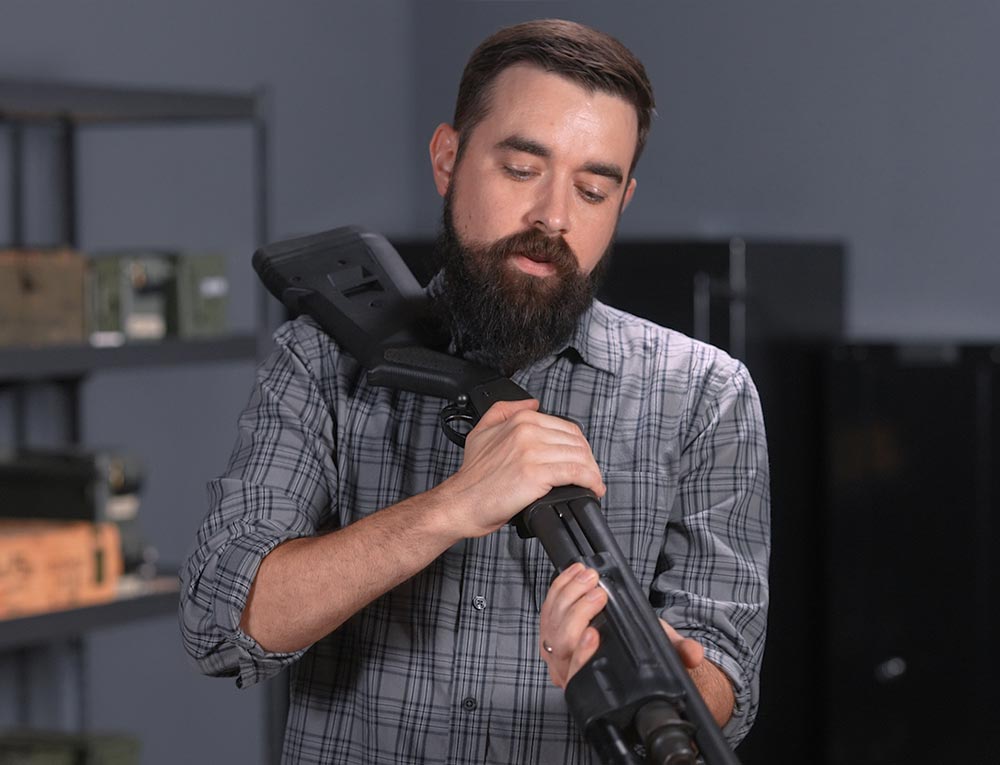 Left handed shooters, you won’t be able to see the ejection port, and you’ll be working against gravity. You might be able to get it to work with a pump because you can kind of hold the shell there until you close the action. I’m not sure I’d count on that working out, though. On a semi-auto, it’s probably going to be tough to support the shell and hit the bolt release with the same hand.

There may be a better way to do this for lefties. The best suggestion I have is to stick with a support hand load for that first round, then you can bring it up to the shoulder to load the tube. 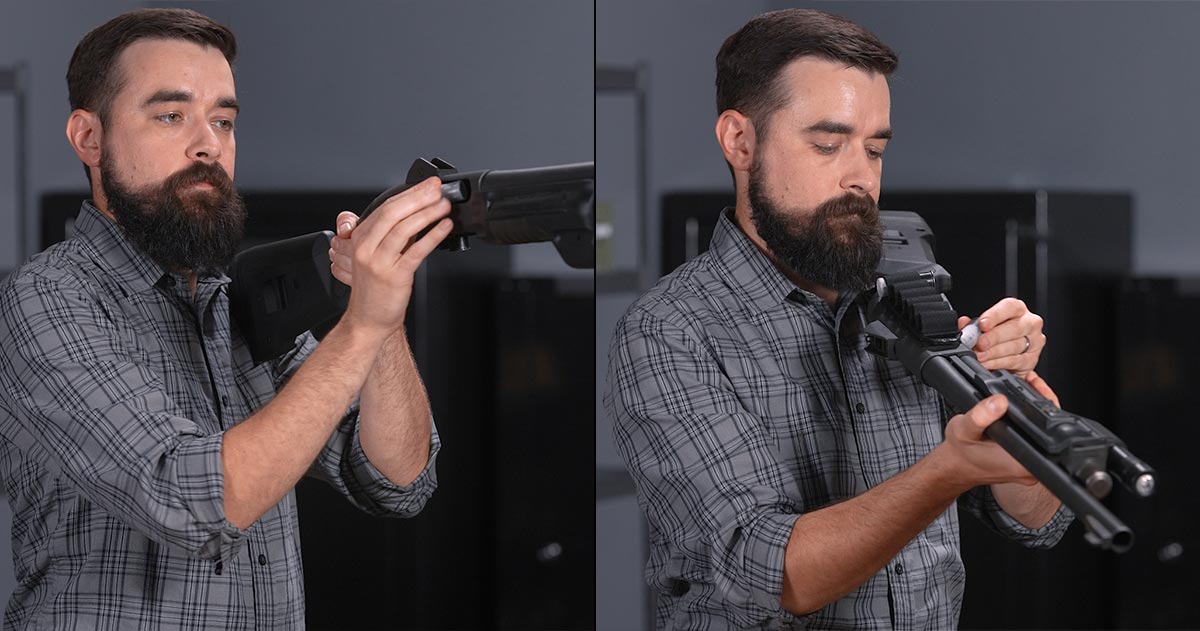 The violin reload is nothing new. I mentioned 3-gun competitors earlier. They’ve been using variations of this technique for years, and it’s probably even older than that. In the defense training world, any kind of strong hand loading has often been viewed with skepticism.

A lot of us have had it drilled into us that we should never take our firing hand off the gun. We should do all our loading and manipulations with the support hand only. That still might be a good principle to go by in some contexts. It makes a lot more sense when your gun is a lightweight carbine and you’re talking about running a charging handle or reloading a box magazine. Because shotgun manipulations are inherently more complex, I think we should lean toward methods that work most reliably, regardless of which hand that requires us to use.

I first gave this technique an honest try earlier this year during the shotgun class I took with Steve Fisher. I also used it a lot during the Thunderstick Summit in Dallas last month – that was three days of shotgun training with five different primary instructors. That gave me a good opportunity to look at the pros and cons of this method, and discuss it with some of the instructors and other students.

I’m used to loading the gun with the stock under my arm and pinned against my side with my elbow. I’ve always felt that was a fairly stable position, especially if I’m going to be loading a lot, like in a training class. Having the gun up on my shoulder feels even more stable and it’s less fatiguing.

I can also see what I’m doing. Even if I keep my eyes focused down range, I have a pretty good idea of what’s going on in my peripheral vision. That means I fumble the shells less often. I also have better control of the muzzle. At the range, this automatically points the gun in what is almost always a safe direction. I don’t have to worry about the muzzle wandering up and pointing over the berm. That also means if I have a light on my gun, I have better control of where the light is pointed.

If I need to stop loading and start shooting, I can actually fire from this position. This is essentially the same as the close quarters short stocking position that I covered in a video a while back.

We did a lot of moving and shooting at the Thunderstick Summit with an emphasis on controlling your muzzle position at all times, and also loading the gun on the move. Violin loading had some huge benefits there.

As far as disadvantages – honestly, I haven’t found any that are that major. If I’m in an upper story of a building and I’ve got people below me, I may not want to point the muzzle down – I might want to use a muzzle-forward technique in that case. Violin loading is probably not the best position to use if I just need to get a single round in the gun as quickly as possible. If I’m topping off the tube with one shell, or if I’ve got an empty gun and I just need to port load one and fire, I’ll probably just keep the gun shouldered. If I want to stay consistent with which hand is doing what, I can use my strong hand for loading without breaking my shoulder mount. I just cant the gun about 45 degrees. 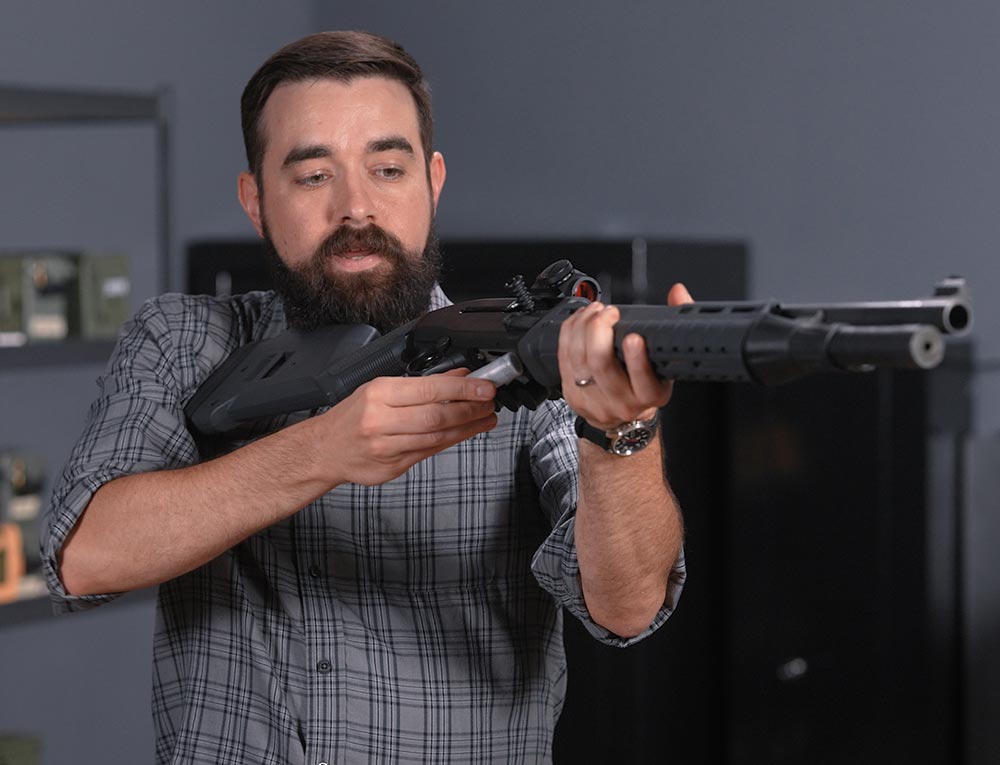 If you’re using a sidesaddle, this reload almost requires you to have all your shells oriented brass-down. For a lot of shell holders, the shells will work their way loose if they’re in there brass-down. To avoid that, I recommend the Quick Detach carrier from Aridus Industries or the velcro shell cards from Vang Comp Systems or from EssTac. I’ve never had the shells come out of any of those carriers when I didn’t want them to.

Now, to get back to reality, this is all fairly academic, at least in a defensive context. Reloading a shotgun in the middle of a fight is just not a thing that happens. Shotguns almost always do what we need them to do with one or two shells. With buckshot or slugs and anything approaching decent shot placement, reloading is basically irrelevant. But for those of us who like to nerd out on shotguns and prepare for implausible worst case scenarios, this is the kind of thing we talk about for fun.

I do think the violin reload might be worth considering if you’re teaching people defensive shotgun skills. It may not be a priority skill for emergency use, but at the range, we have to reload anyway, so we may as well do it efficiently. Having at least one loading technique you’re comfortable with also builds confidence in gun handling, and tends to makes you a safer shooter to be around.

At the Thunderstick Summit, Darryl Bolke mentioned that he’s been teaching this technique to his intro level shotgun classes lately and people have been picking it up very quickly. It seems to work especially well for students with a background in more traditional shotgun sports like bird hunting and clay shooting. Like I said earlier, it’s also very stable, it’s easier to see what you’re doing, and gives you better control of the muzzle – all things that are beneficial when teaching someone who’s new to running a shotgun this way.

Guys, I hope you found some of this helpful, or at least interesting. If not, please accept this important life tip as a consolation prize: Don’t store fresh, uncut tomatoes in the refrigerator. They will lose their flavor and get mushy. Don’t store your ammo in the fridge, either. Keep it in a cool, dry place, and always buy it from us with lightning fast shipping at LuckyGunner.com.