We asked Steve Fisher of Sentinel Concepts a few shotgun related questions. He had answers.

Hey everybody, Chris Baker here from LuckyGunner.com. A couple of months ago, I had a chance to take the Sentinel Concepts Practical Shotgun course taught by Steve Fisher.

Since the 90s, Steve has offered training on handguns, carbines, shotguns, low light shooting, and law enforcement tactics, among many other topics. Very few still-active instructors have taught the defensive use of the shotgun for as long as Steve.

At the end of the class, he was kind enough to stick around for a few minutes to answer some questions for us. We’ll start off with an equipment-related question – I asked Steve about the most common hardware failures he witnesses in shotgun classes.

Q: What are some common hardware failures you see in shotgun classes?

STEVE FISHER: One that we see a lot is the old Remington two-piece, three-piece male/female connector mag tube extensions. They always rattle apart on the gun. Every course, they fall apart.

Sidesaddles. Certain sidesaddles were very prone to breakages under hard use. That’s a lot of slugs, a lot of buck, that kind of thing. They’ve gotten better, obviously. The Aridus Industries one is pretty much bomb-proof. Have had zero issues with that.

Then you also have all the bolt-on stuff guys want to throw on these guns. They want to throw pic rails on them. They want to put side-saddles, plus pic rail, plus 12 inches of rail going down the top of the barrel. Heatguards, heatshields, all these things, they find every sharp edge. 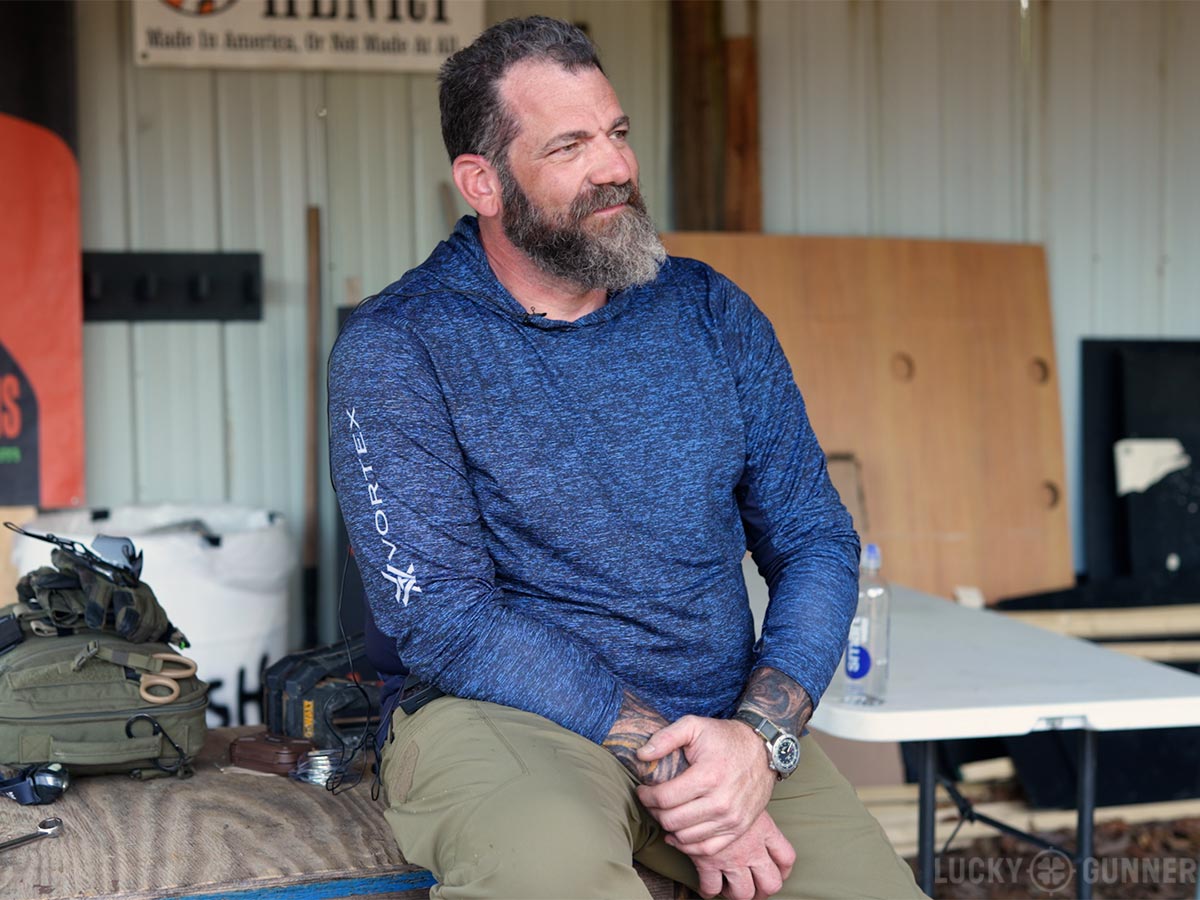 The gun is simple. It doesn’t have to be complex. I need a good set of sights. I need a solid white light on the gun. And then I need a way to hold extra ammo on the gun. A lot of that could be solved if guys would just get some velcro on it or an Aridus. If they just got a good white light – preferably a dedicated one such as the Surefire forend light which I choose, but I know they’re expensive – so even a good chunk of pic rail on the gun and a good white light. And that’s all they need.

But everybody likes to accessorize these things like it’s an M4 and it’s not. It’s a lot more violent weapon. It puts a lot more shock and energy into all those parts. And a lot of it is user-induced error because they won’t either Loc-Tite and witness mark or actually take it out and see what it does. Then they find these failure points and those things they’ve attached to the gun that it really ultimately doesn’t need.

Q: What are some other common user-induced hardware problems you see?

SF: Loading shells backwards is a big one. Especially coming out of bags and pouches. They start to load things and they don’t take that pause to feel for the brass. They just dump a round into the action and then they’re like, “S—!” And then the gun’s locked up and there’s this problem that they have and they start to panic. And it all sets in and it turns into a train wreck. It’s like, “Hey man, take a breath. Relax. Look at it. Figure out how to load the gun correctly.” It happens every class. I’ve done it. Others have done it. We see it happen.

The other big one I often see with students, especially if they’re trying to go rapid with the gun, is short-stroking the action on a pump. They get this half-load thing and they end up sometimes even double feeding the gun. Then they’ve got all of this tension and pressure built-up and then they’re starting to freak out over that. This is easy. Reach in and pull one out, alleviate the problem, get the tension off.

The other big user-induced error is often the way guys will hit buttons on semi-autos to release the bolt home. They’ll often get digits in the way and get a stoppage of some sort where it doesn’t close the bolt all the way and it’s an open-bolt failure in the gun.

Usually, the biggest user-induced error is loading a round backwards in the gun. And then short-stroking.

Q: How can we avoid over-penetration issues with a shotgun?

SF: Be better with the gun, for one. Be more precise in your zeroing and patterning just like you would a rifle or a handgun with either a red dot or iron sights. Zero the gun. True the gun. Get good information/data out of that load selection out to those distances.

Look at your layout where you’re going to use the gun. Most importantly, indoors, inside a structure, if that’s your thing. Think about the background, think about the foreground shots, where points of domination may be with the gun.

Think about positional changes with the gun based on that information. By positional changes, I mean I could take a knee and shoot up where it’s on an angle, minimizing that issue. I can also shoot downward and take another selection if I chose to shoot pelvic girdle with a shotgun. It’s crushing to a pelvic girdle region. So there are ways that people will talk about things where it’s like, “Hey, you have alternate options to place those shots based on foreground/background.” And a lot of it is wherewithal of training and pre-gaming and pre-planning.

If I was living in a confined space apartment – 400-500 square feet, paper-thin walls – I would probably end up down-loading my selection to something like #4 buck, bare-bones minimum. Because, hopefully, more pellets and a little bit more spread out of that load, but not as big pellets, little less over-penetration.

Depending. What is it hitting, what is it impacting? Ultimately, I am a #00 and #1 buck guy. #4 is my last, bare-bones minimum choice based on structures. I’ve got a buddy who lives on a boat and in an RV most of the year and chooses #4 buck just for that reason.

But I think too much emphasis is placed on [load selection] and not placed on actually shooting and getting data out of the gun.

Q: Is the low ammo capacity of shotguns a realistic concern?

SF: A lot of people have lived with an M4 their whole life. It’s the only gun they’ve ever known, either through the past 20 years of service or working with that gun through the military, some law enforcement applications where the patrol shotgun has kind of faded away. All they’ve ever really known is a carbine.

Yes, there is an ammunition capacity deal, except, the problem is that I have 8-9 pellets in most #00 buckshot. So if I do the math, I still have greater capacity than an M4 (thirty round standard capacity). But I will expend a lot of that capacity sooner by firing more rounds out of that gun because each shot is sending out 8-9 pellets. So I’m reducing capacity faster. What I’m getting is a better energy transfer. I’m getting a lot more lethality out of that gun a lot sooner, requiring less rounds fired. So there’s a trade-off 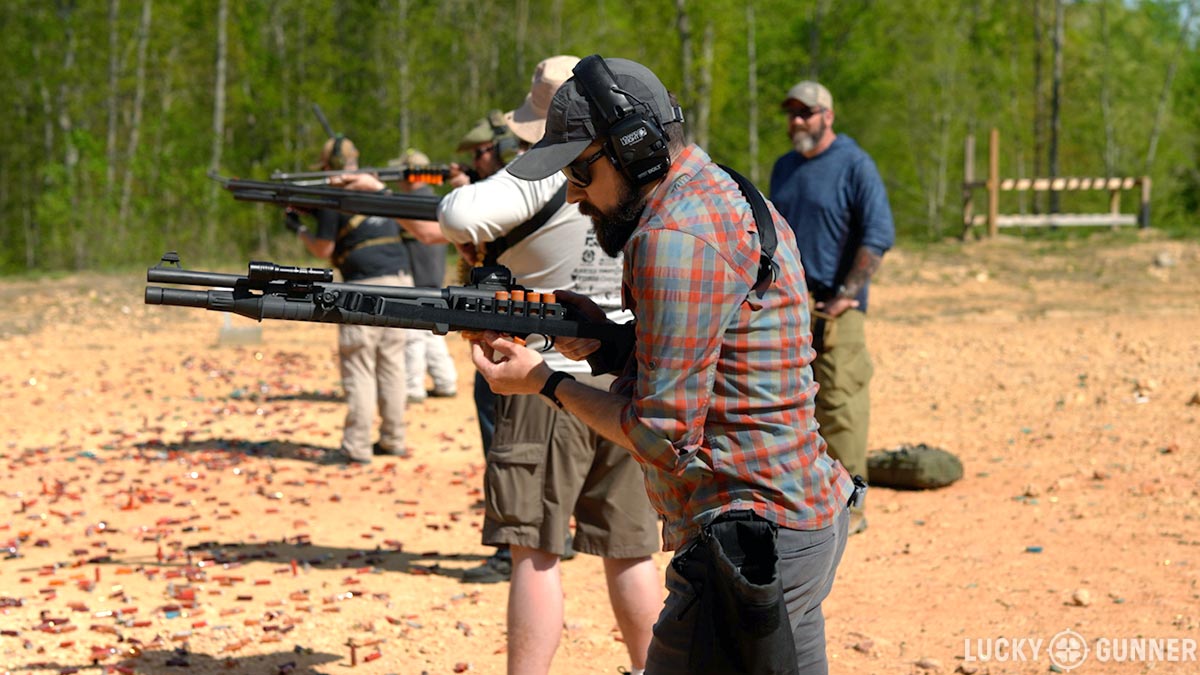 Weight/size benefit ratio: a carbine, 14.5 or 16-inch guns with the stock extended, is about the same as most 18-inch shotguns. Weight, they’re still in that 7-8 pound range. So, it’s a moot point.

People are like, “they’re violent.” Yeah, they can be. But if you manage it and you manage it well with recoil mitigation – either porting or technique – it’s not that bad. And how long are you actually shooting the gun and what is the job with the gun and the role? I’m not going to get in a protracted firefight with it somewhere. It’s in my living room. It’s in my bedroom.

The Necessity of Aiming a Shotgun

Q: Are we over-complicating this? Do shotguns really require training and practice to use effectively?

SF: Where do you want to be with the gun and what is the need of the gun? If it’s a gun that’s shoved in the corner of the bedroom, you need to put 5, 6, 7, 8 shells in it. You need to know how to operate the gun, mount the gun, put it in the general direction, get a gross sight picture, press the trigger. Reason being, we have spread of the gun. We have spread of the pattern and pattern density of the shot.

Falling back on that, technology has caught up over the past years – Federal Flite Control, Hornady Critical Duty, Critical Defense, the old Speer Lawman loads – that pattern extremely tight. That requires a little bit more refined aiming of the gun because that shot column is now about the size of a slug. And that is a real thing, so it does require just a little bit more finesse and fine-tuning on that.

While it can be considered kind of a “point and shoot” interface, that’s not always beneficial. You may get lucky. You may get away with something. But you still, realistically, should mount the gun, get a “good-enough” reference/sight-picture that is enough to complete the task and just press the trigger. You still should aim this gun. It is easy to miss.

We saw it here. I see it in almost every class. C-Zone steel, guys running birdshot, 490-some pellets, and they will completely put a round high-left over the shoulder of the target. Because they disregarded the mount, they try to shoot the steel, and they’re not shooting the sights. You still need them. And the Internet is wrong if they disagree with that. Fact. Show up to class, I’ll pay your way, I don’t care. [laughs]

More people are spending more time behind the Internet instead of actually being out on the range. And if it’s not my class, somebody else’s class – go to a course. It’s time, it’s effort, it’s money, it’s energy away from the family. You don’t always get the nuances for free from a video on the Internet but everybody wants it for free.

They expect this now in this era that we’re in of Internet information and video and YouTube and Instagram and all these things. They almost admit it, like – “you should do a video on that.” Maybe you should just come to a class and learn the little detailed parts because there are pieces that will always be missed. Videos are great. They’re awesome teasers. They’re great for getting people interested and stuff. But then people want the rest for free. I don’t come to your job and ask you for this for free. Don’t ask those that are in the training community for it all for free, either. It’s a trade-off. Don’t be lazy.

A huge “thank you” to Steve Fisher for talking with us. Check out the classes he has available at Sentinel Concepts.

Let me know if you guys like this format and I will try to get more instructor Q&As posted this year. And as always, the next time you need some ammo, be sure to get it from us with lightning fast shipping at LuckyGunner.com.

My Everyday Carry Gear and Why It’s “Wrong”

What have I got in my pockets? After numerous requests, we're taking a look at my own personal everyday carry...