Last month, Springfield Armory discontinued the XD-E — just three and a half years after its release. As the only small single stack 9mm on the market that’s DA/SA, it filled an important niche. So why did it fail? We don’t know for sure, but we’ve got some pretty good guesses.

Details in the video below, or keep scrolling for the full transcript.

This is the Langdon Tactical Edition of the Springfield Armory XD-E. Since the launch of the base model in 2017, the XD-E has been the only slim subcompact 9mm on the market that’s also double action/single action.

However, in December 2021, Springfield Armory officially discontinued the XD-E series. That’s a retail lifespan of less than four years. Usually, when a gun is pulled off the shelf that quickly, it’s because it’s some kind of novel experiment or just complete junk from the beginning. There is nothing unconventional about the XD-E, and it’s not junk, either. It’s a pretty decent gun. So why did Springfield get rid of it? That is what I’m going to wildly speculate about today.

Hello everyone, I am Chris Baker from LuckyGunner.com where you can get all of your ammo with lightning fast shipping.

Generally, gun companies only cancel a model for one of two reasons. Either it’s not generating enough profit, or they want to replace it with an updated model. In this case, I’m going to guess it was the former. I don’t get the impression that the XD-E was a very big seller for Springfield, and so far, they have not announced anything new to take its place. 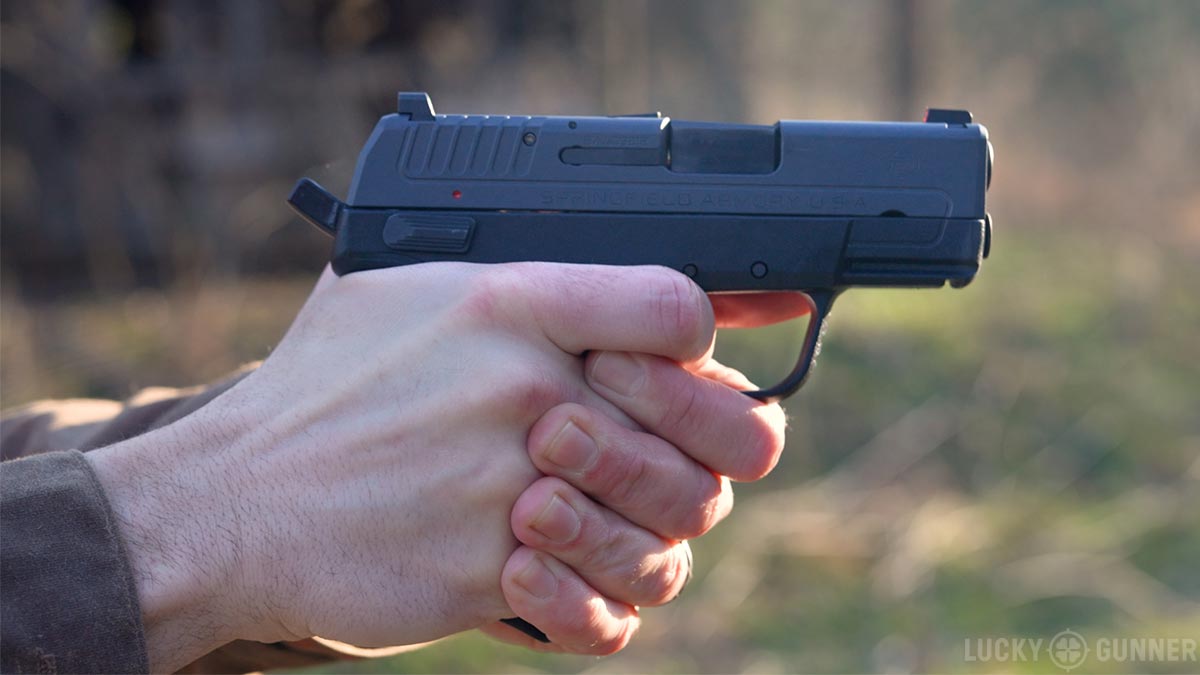 The simplest explanation is that it’s a DA/SA pistol in a striker-fired world. But I think there’s more to the story than that. Before I get into that, let’s take a look at the basics of this gun.

The XD-E series consists of four different models. A 9mm in three different barrel lengths (3.3, 3.8, and 4.5 inches) and a .45 available only with the 3.3-inch barrel. They use single stack flush-fitting mags with eight rounds for the 9mm, six rounds for the .45. Extended mags hold one extra round.

Mechanically speaking, the XD-E has little in common with the other pistols in the XD lineup. The other XDs are striker fired with a grip safety. The XD-E is hammer-fired with a manual safety/decocker and no grip safety. It’s a completely different action. It uses its own magazines. It’s really an XD in name only.

The Langdon Tactical Edition added some practical features that make the gun a little easier to carry and shoot. They bobbed the hammer to help reduce printing. They added a set of the excellent Ameriglo CAP night sights. The action job brought down the double action trigger to an extremely smooth eight pounds with the single action at about 4.5. The slide is Cerakoted gray to set it apart from the base model. And to top it off, they put three mags in the box instead of the standard two.

Other than maybe adding some additional texture to the frame, there is not much else Langdon could have done to make these pistols better. It’s a substantial improvement over the factory gun. But even their semi-custom treatment was not enough to save the XD-E.

It’s no secret that the popularity of DA/SA pistols pales in comparison to striker-fired guns. I say that as a huge fan of DA/SA. All else being equal, if I could choose any action type, it would be DA/SA. That puts me in a small minority of shooters.

But we’re a minority that’s still making a lot of money for companies like Beretta, Sig, CZ, and HK. The DA/SAs those companies make are double stack duty-style pistols. Those of us who train with those guns, or compete with them, or carry them on duty, would love to have a slim carry pistol with the same action that’s closer in size to something like a Shield or a P365. I believe there’s room in the market for at least one pistol like that.

The XD-E could have filled that niche. So why didn’t it?

First of all, it was just too big and too late. By 2017, just about every handgun company, including Springfield, had already come out with a slim single stack 9mm. 2017 was also the year the Sig P365 came out. That started a new wave of slim 9mm pistols that were as small as the single stacks, but with double-digit ammo capacity.

The XD-E is narrow, but it’s also very tall. The overall footprint is bigger than just about any other slim subcompact nine on the market. Double action mechanisms usually require more space than striker-fired actions. So the height issue might have been unavoidable to some degree. 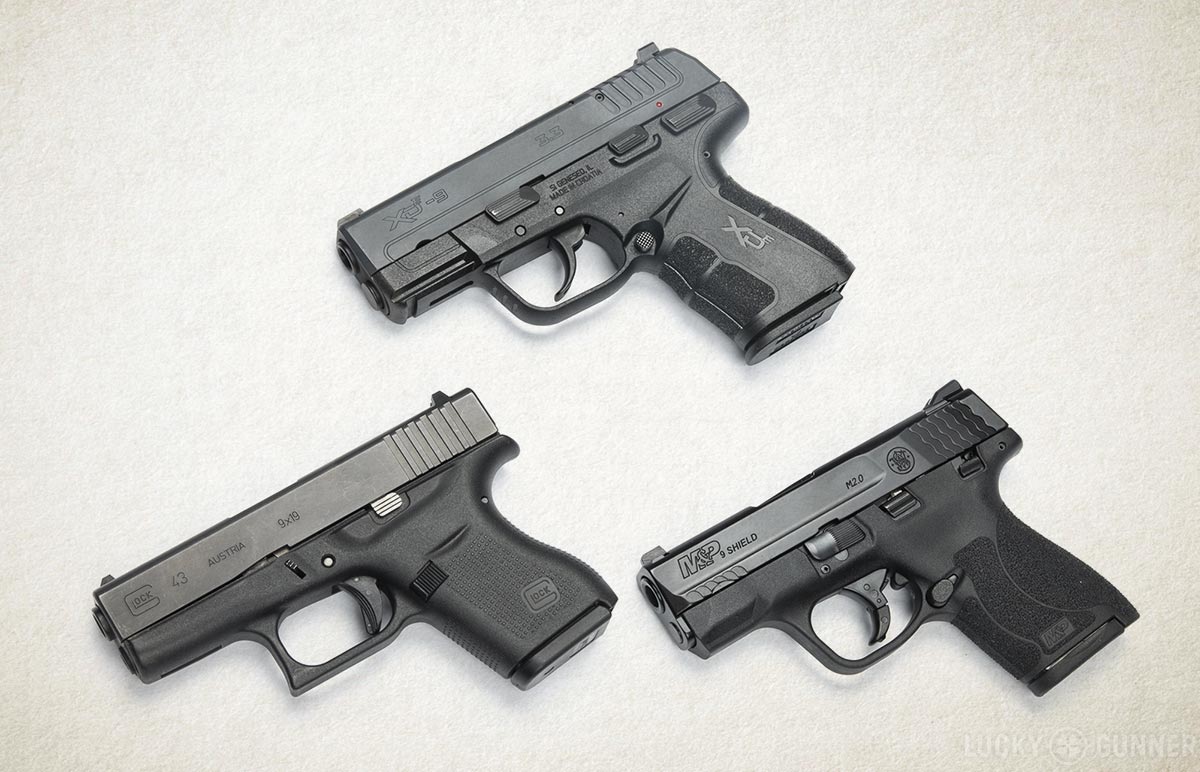 But the XD-E was built around the .45 ACP. They used the same size frame and slide for both calibers. That means they had to design everything to accommodate .45. I’m no engineer, but I suspect that if they had just skipped the .45 and designed the gun around 9mm, it could have been scaled down a bit. A .45 should never be this small, anyway. Nobody shoots them well. People who actually shoot their carry guns always buy the 9mm version. Even with it being late to the game, a smaller 9mm XD-E might have been more successful.

Now, I’m not saying this gun is too big to carry. I got a holster for it from JM Custom Kydex and I attached that to my Phlster Enigma. I’ve been carrying it around for the last few days and it’s a great combo. It will work just fine as a carry gun. But the XD-E is also roughly the same length, width, and height as a Sig P365 XL with an optic mounted. And the Sig holds four more rounds and has a half inch more barrel, and it’s a couple of ounces lighter. That’s a lot to give up just to get a double action trigger. 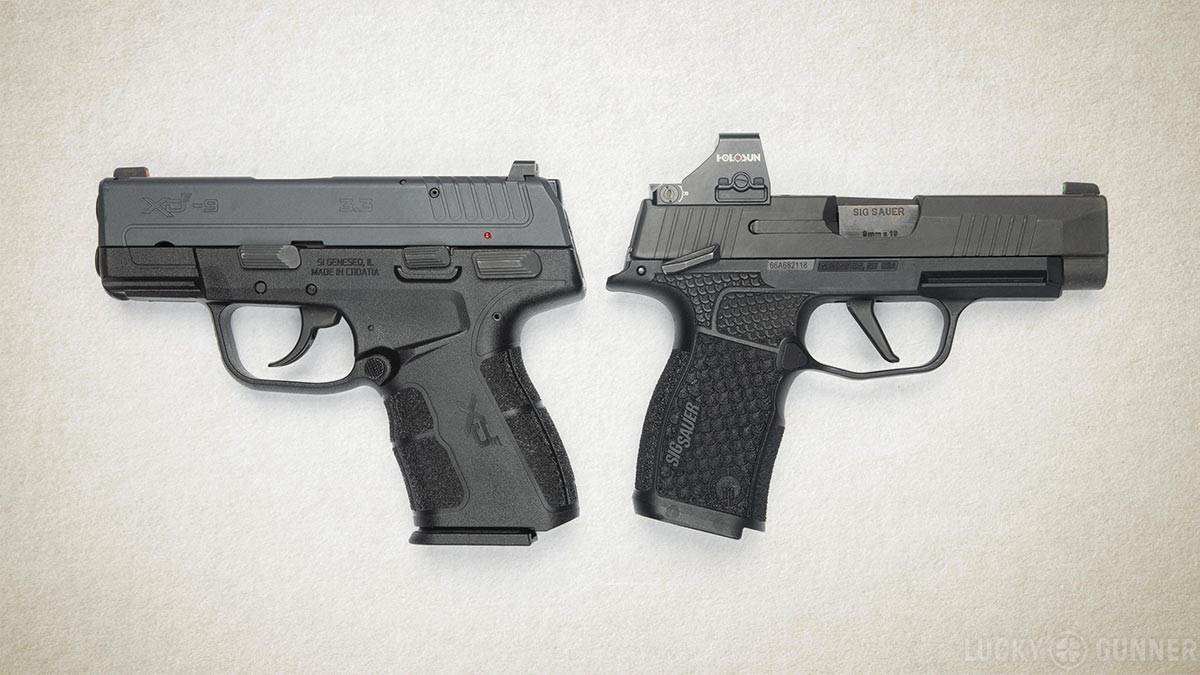 Despite the size, the XD-E still had the potential to win over DA/SA fans. But there are some clues here to indicate Springfield was definitely not targeting the enthusiast crowd. For instance, take a look at the safety/decocker. The way it works on this gun is that you press down to decock the hammer and it pops back to the fire position. You can carry it like that, or you can push the lever up to the safe position. Or you can carry it with the hammer cocked and the safety on like a single action only.

That’s a lot of options. But most DA/SA fans don’t want options. We want a decocker without a safety. The DA trigger *is* the safety. If the manual safety lever is there, it can always get engaged accidentally in the holster, so we have to get in the habit of sweeping off the safety on the draw stroke. Like a lot of modern safeties, this one is positioned too far back and it doesn’t have a decent shelf to catch your thumb on. Without better ergonomics or the option of a decock-only version, this is a deal-breaker for a lot of DA/SA fans.

What I suspect happened here is that somebody at Springfield (or maybe at the Croatian company that actually makes the guns) conducted a survey and found that lots of first-time gun buyers would be more likely to consider an XD if it had a manual safety. That’s a pretty common request with inexperienced shooters. They might not know much about what they’re actually looking for, but they expect a gun to have some kind of manual safety lever. So the men in suits at Springfield looked around and saw that there was a hammer-fired gun in the works and told the engineers to make sure that gun has a manual safety.

I’m sure it didn’t go down exactly like that. But based on Springfield’s marketing materials from when the XD-E first came out, they were definitely targeting new shooters. They highlight how easy the gun is to rack. How easy the controls are to use. But a DA/SA with a manual safety is probably the least user-friendly action type for a shooting novice.

The final nail in the coffin was the XD branding. Obviously, they’ve had a lot of success with that brand name, but within certain circles of the shooting world, the XD series has a questionable reputation, at best. For today, it’s not really important whether that reputation is fair or true. The fact remains that a lot of people believe XDs are unreliable.

Even though the XD-E is a completely different design, I think that XD branding really poisoned the well. They were able to side-step this problem with the Springfield Hellcat. It is not part of the XD series. I know people who have carried a Hellcat who would never even think about touching an XD. There’s a lot of overlap between DA/SA enthusiasts and shooters who have a negative view of the XD series. Simply giving the gun a different name could have helped generate more interest just like it did with the Hellcat.

How to Make a Better Slim DA/SA

Designing and mass producing a completely new firearm requires a massive effort. It’s expensive. It takes a long time. I am not saying I know how to do all of that better than the people at Springfield Armory. But I do think this is what happens when a gun is designed by a committee rather than by people who are actually excited about a specific concept.

I don’t expect a new pistol to be designed exclusively around what the enthusiast end of the market says they want. That’s not how a company like Springfield makes money. But for a niche product like the XD-E, it would probably help if they didn’t ignore the enthusiast crowd, and that’s exactly what happened here.

If it wasn’t for the manual safety, I would have no problem carrying this Langdon XD-E long-term. It’s pretty easy to shoot for a small 9mm. It’s easy to conceal. And it’s been reliable for the 500-odd rounds I’ve put through it. 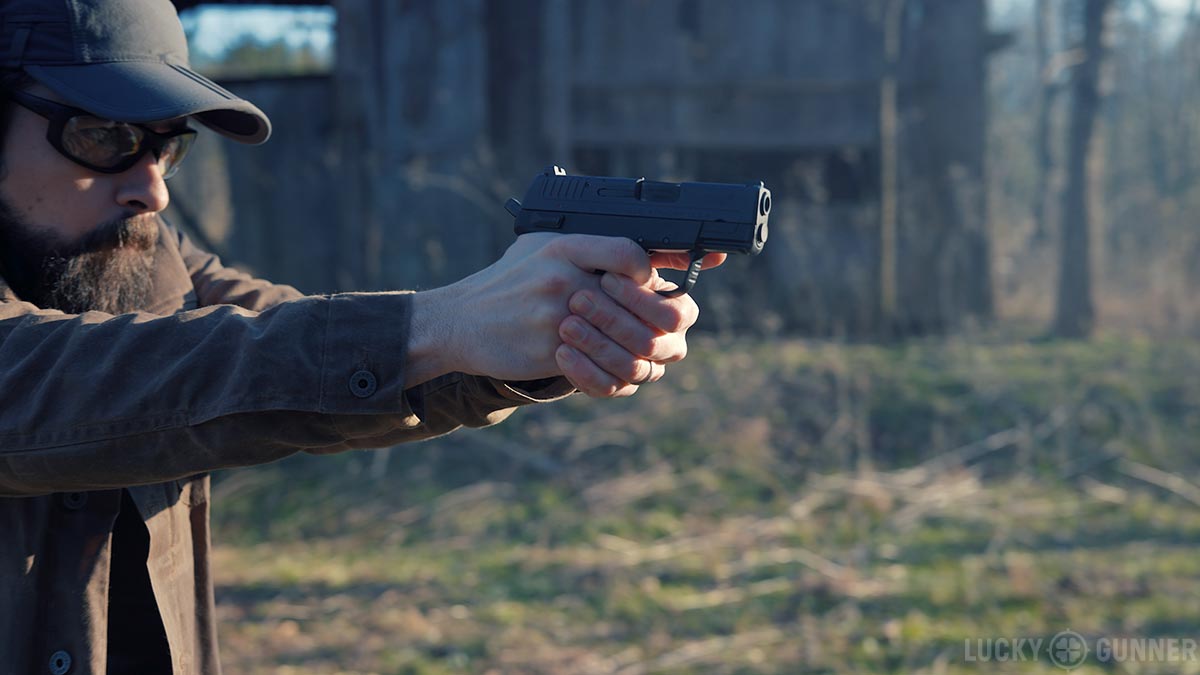 Personally, I’d like to see a slim 9mm DA/SA from a company that does know how to appeal to smaller niche markets with premium-level products. Bump the price tag to the $1000-1500 range and just throw in all the stuff the DA/SA fans want. Make it optics ready. Decock only. Get the size down and figure out how to do one of those tiny clown-car 10-round magazines.

Make something that resembles a Beretta Cheetah that can fire a respectable cartridge. Or just a Sig P365 with a hammer. I think there are a lot of people who would be willing to pay a premium for a small DA/SA that’s actually done right.

That said, if you’re interested in owning an XD-E, it looks like the distributors still have a lot of them moving through the supply chain for now – at least the 3.3-inch 9mm version. The Langdon Edition is out of stock, but you can still send your XD-E to them for a trigger job.

That’s all I’ve got for now. I’ll see you next time.

How hard is it to turn an old hunting shotgun into a compact home defense shotgun? Is it cheaper than...