When the Army announced the Modular Handgun System (MHS) competition, the writing was on the wall for the Beretta M9. Big Army had decided it wanted a new gun, and nothing was going to change that decision. In December 2014, before the Army sent out the MHS Request for Proposal (RFP), Beretta submitted the M9A3 to the Army via a mechanism called an Engineering Change Proposal. An ECP is where a manufacturer proposes changes to an existing product that’s already under contract.

The M9A3 ECP would have upgraded all in-service M9 and M9A1 pistols to the M9A3 specification. M9A3 pistols feature a Vertec grip, accessory rail, improved trigger, and threaded barrel. Beretta claimed that the ECP met almost all the Army’s stated requirements for the MHS, and could be produced at a cheaper per unit cost than a new M9 pistol. The M9’s unit replacement cost is $263 to the government, and procuring a pistol like the M9A3 for cheaper than that would have been a smart use of taxpayer dollars.

The Army rejected Beretta’s ECP without evaluation and proceeded with the MHS program. An entire article could be written about the MHS selection itself, but the short version is that after several starts/stops, and a challenge by one of the losing companies, the Sig Sauer P320 entry was selected as the MHS and designated the M17/M18.

The M17 is a full size pistol with a 4.7 inch barrel. The M18 shares the same frame dimensions as the M17 but has a compact 3.8 inch barrel instead. Both guns accept P320 magazines, have manual safeties, and are issued with 17 and 21-round magazines. On both the M17 and M18, the rear sight plate can be removed by an armorer to mount a compact red dot site to the slide. 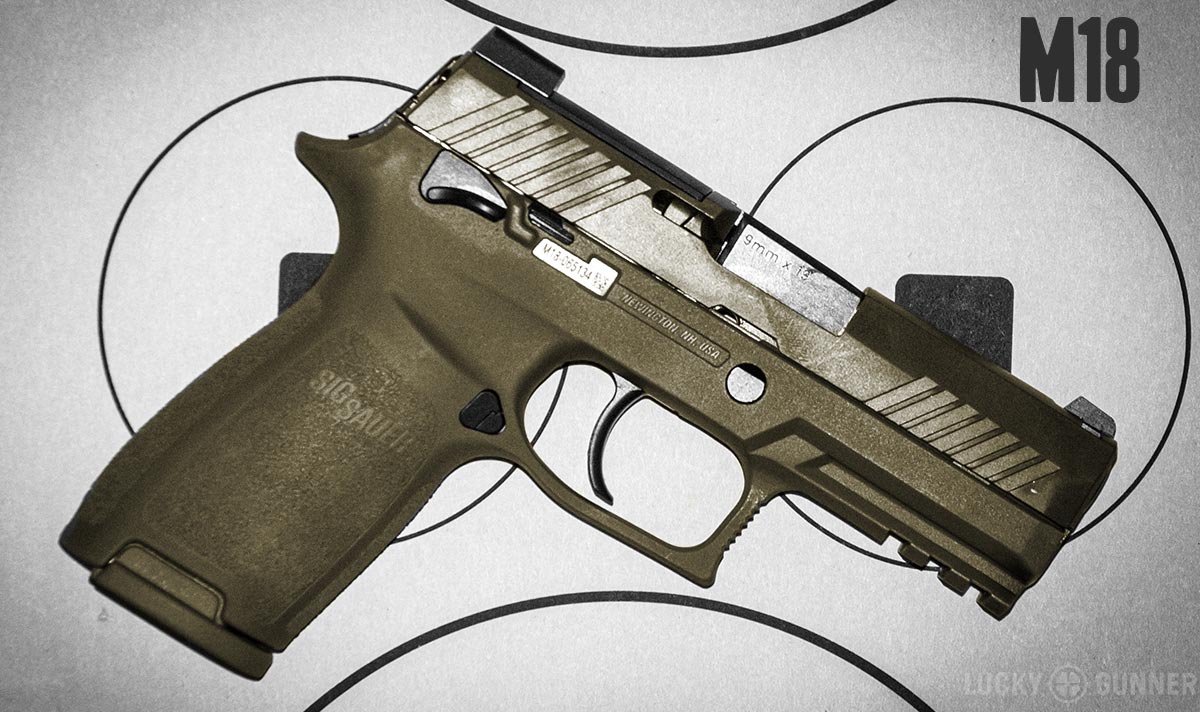 Big Army decided to issue both the M17 and M18 to different troops depending on their role. The USAF, Navy, and Marine Corps selected the M18. The per-unit cost of the MHS has been variously reported as $180 to $207. While that is a cost savings over the per-unit cost of replacing an older M9 with a new one, the M9A3 option would have presumably been in the same price range as the MHS.

With costs coming out the same, the question that we wanted to answer was “did the military really upgrade their capability?”

While handguns are rarely utilized in military operations, part of the Army’s justification for the MHS was to increase “lethality”, which is a tricky thing to measure. However, if you interpret lethality as “the ability to get rapid incapacitating hits on a threat” we can start to measure it.

To measure lethality, we set to test both the M9A3 — the gun the military could have had — and an M18. Since both guns are 9mm, the ballistics are the same. Thus, the measure of lethality is how easy each gun is to shoot.
Ease of operation, or “shootability,” is a commonly referenced term in the firearms industry. To measure the shootability of the M9A3 vs the M18, we established a series of protocols. 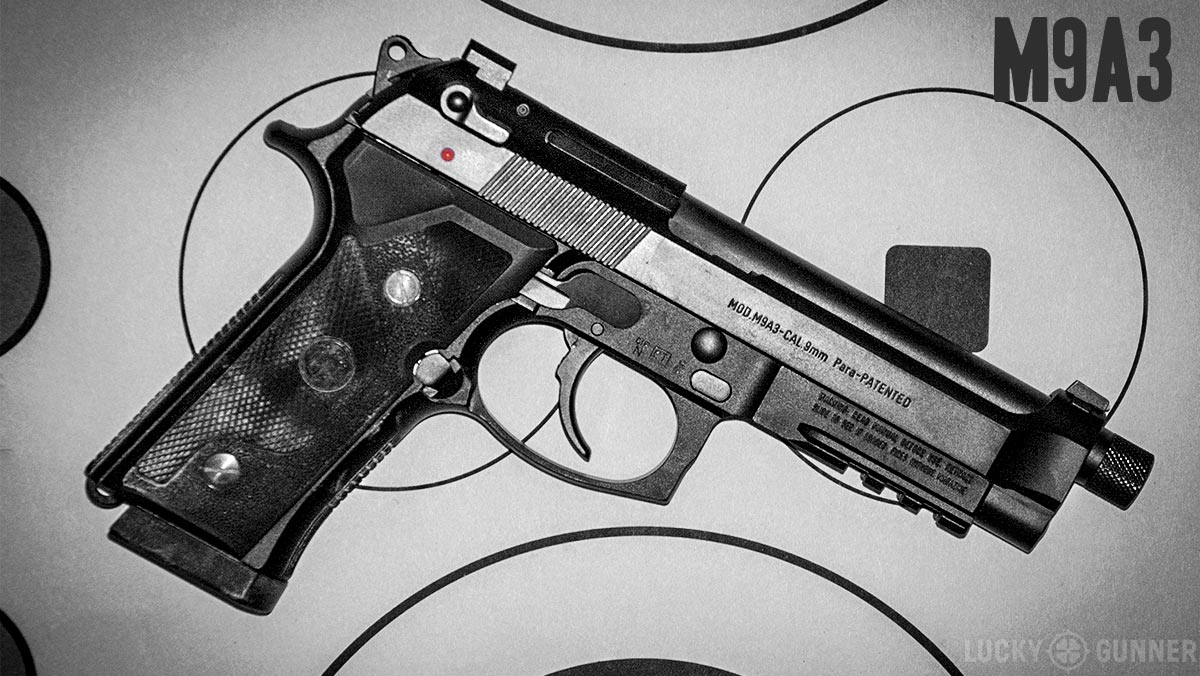 First, two commercial production guns were sourced from retail sources. Retail pistols were purchased to remove the chance of having a special “writer’s gun” that had been carefully manufactured to ensure the best performance. The guns weren’t modified in any way before testing.

The test protocol consisted of shooting drills and tests to demonstrate shootability, accuracy tests, and an endurance test. As a master class competitive shooter, I fired all the performance-based drills. I’ve used striker fired, single action, DA/SA, and DAO guns extensively in competition, and while I have personal preferences, I am able to judge a gun’s shootability based solely on its performance.

All drills were fired from the low ready to eliminate holster variables in drill times. Both guns used the same types of ammunition from the same lot numbers to control ammo variables. Despite all these controls, we do need to acknowledge that this test is a sample size of one vs another sample size of one, and is inherently limited as a result.

To test shootability, we used the following drills for each gun.

The guns were shot on separate days under identical weather conditions. Each test was fired in the same order, exactly as listed above.

The F.A.S.T. is the brainchild of departed firearms instructor Todd Green. It is carried on to this day by Ernest Langdon in his classes, and shot by numerous enthusiasts. It consists of starting with two rounds loaded in the gun, firing 2 shots at a 3×5 inch head box, reloading from slide lock, and firing 4 shots at an 8-inch circle all from a distance of 7 yards. It’s a useful drill, because in six rounds it shows how easy a gun is to get hits on a small target, how easy to reload, and how well it gets fast hits on a large target. 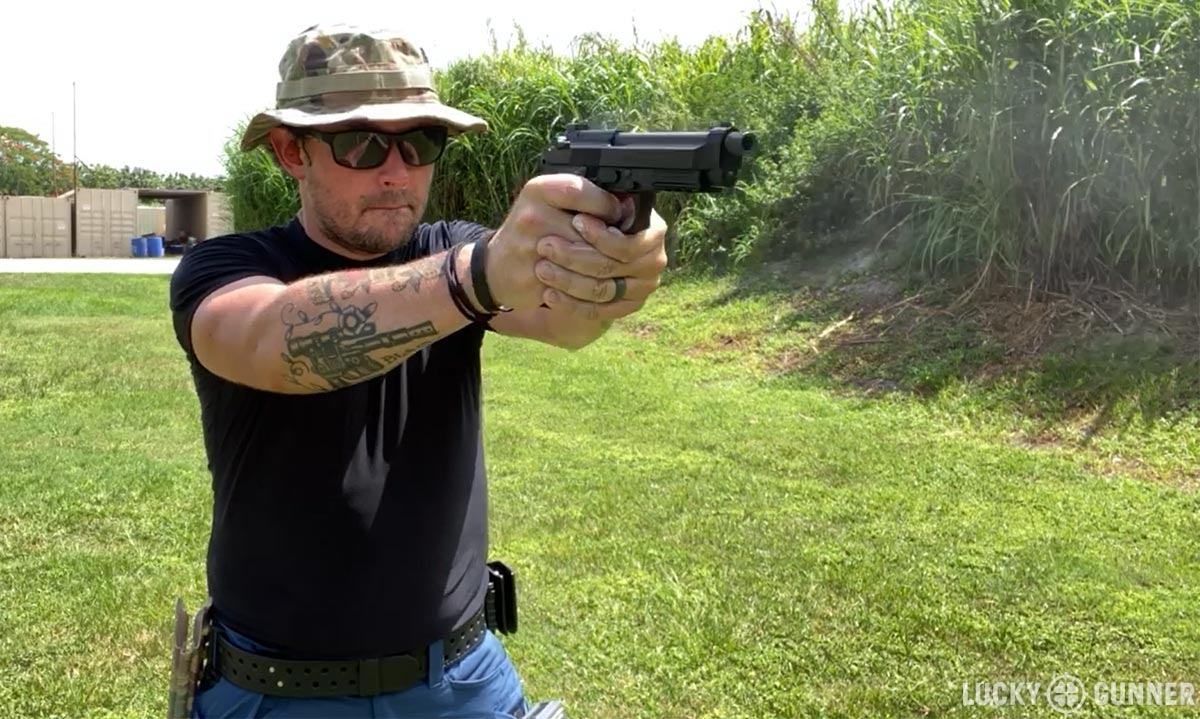 For our testing, only “clean” runs would be counted, meaning no rounds could strike outside the 3×5 card or the 8-inch circle. All times were measured on a CED Pocket Pro shot timer.

Breaking down the numbers, the differences in first shot times and split times between each gun were negligible. Where the Beretta had a clear advantage was during the reload. The M18’s magazine well is not beveled, and measures less than inch in width. The Beretta has a beveled magazine well which measures slightly over an inch in width at its widest point. Additionally, I found the Beretta’s slide release easier to manipulate than the lever on the M18.

One of the classic shooting drills, the Bill Drill is six shots fired as fast as possible (while still getting hits), traditionally at a USPSA target or 8 inch circle.

Again, each gun was fired through the drill 3 times. The M18 scored an average time of 2.03 with the best time at 1.80. The M9A3 had an average time of 1.74, with two fastest times of 1.64. In testing, I found that the M9A3’s trigger pull was superior to the M18, which enabled much faster accurate shooting with the Beretta pistol.

This is an appropriate place in the test to talk about one of the technical specs that affects the performance based shooting applications of these guns, and that’s the trigger pull. The M18 is a striker fired pistol, the M9A3 is a double action/single action pistol like the M9. The advantage of a striker fired system is there’s one trigger pull for the shooter to learn, and that the single trigger pull is lighter than the heavy double action pull of the Beretta. But, the DA/SA system in the M9A3 has an advantage in that while the first double action pull is heavy, the next pulls are much lighter.

Our commercial sample M18 had a trigger pull that measured 7.25 pounds, compared to the M9A3’s double action pull of 12 pounds. The M9A3’s single action trigger pull measured 4 pounds. That means that over the course of a six shot drill, the M18 shooter has to use 43.5 pounds of force, and the M9A3 shooter has to use almost half that force, only 24 pounds. Further, the M9A3’s trigger subjectively felt superior to the M18, exhibiting far less creep and stacking.

This drill is 25 shots fired over 4 strings of fire, all at 10 yards. The target is an 8-inch circle and a 4-inch head circle. With these guns, a good time is anything under a cumulative total of 20 seconds. Any rounds that strike outside the 8-inch or the 4-inch circle incur a 1-second penalty. 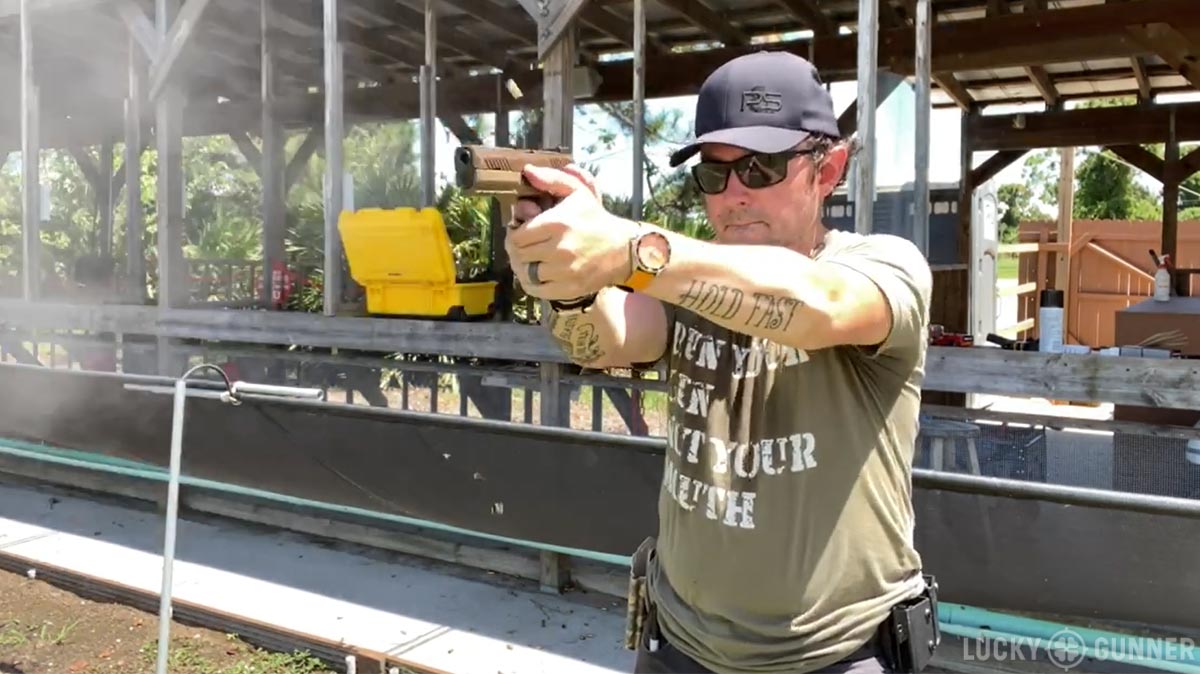 On both runs, I missed one shot incurring a penalty for each gun. The M18’s time was 24.16, and it also had its only failure of any type during the strong hand only part of the test. The gun failed to eject a spent case, forcing me to perform a rapid immediate action and continue shooting. Beretta’s M9A3 functioned without issue and had a final time of 17.1 seconds.

The Test and Bullseye

Up next on the evaluation are two drills: The Test, and a straight up bullseye shoot.

However, the M18 redeemed itself on the next phase, which was a 10 shot slow fire bullseye string at an NRA B8 target at a distance of 50 feet. With time pressure removed, the M18 shot a respectable 94 points out of 100. The M9A3 shot the exact same score, making this particular test very close. 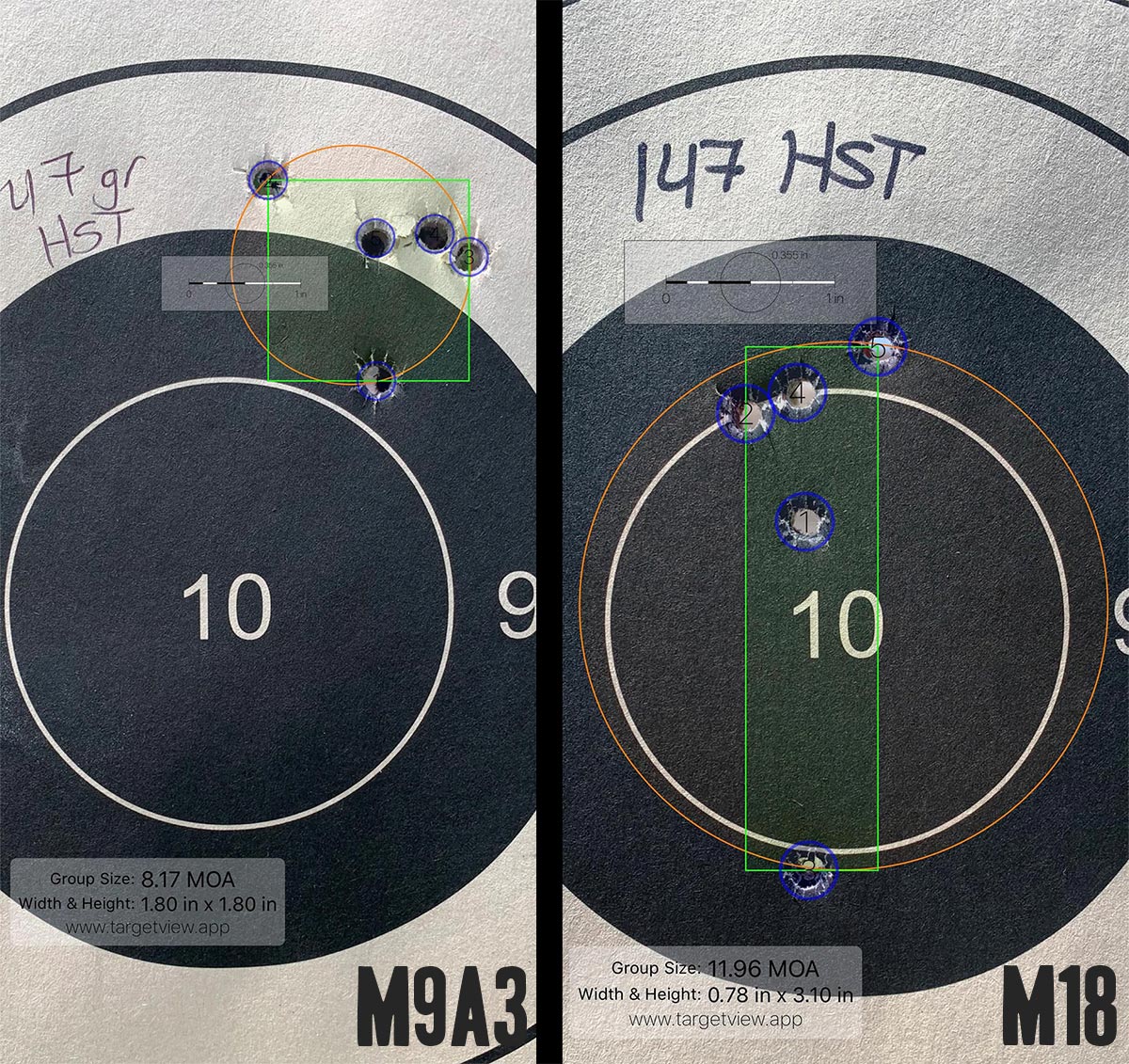 With speed and time pressure removed from the equation, the difficult trigger on the M18 is much less of a factor and the gun is just as mechanically accurate as any other modern service pistol.

After the specific tests were completed, the guns were both fired over the course of a few weeks to bring their total round count to 2,000 each. During the post-test shooting, neither gun experienced any failures to feed, eject, or mechanical failures. In fact, the only failure of either gun was the failure to eject that the M18 experienced during the 5×5 Test. Since the military uses an acceptable failure rate of fewer than 2 failures in 2,000 rounds, both pistols passed the reliability test adequately, leaving the final category a draw.

Based on the test results, you could say that the Beretta M9A3 enjoys a slight edge in shootability and practical performance. But when you look at that data, the difference between the FAST averages is 0.79 seconds, and the difference in Bill Drill averages is 0.24 seconds. While those fractions of a second would make a difference to a professional shooter, how much will they affect the M18’s performance in the hands of your average soldier, marine, or airman? Little to none at all.

The state of military handgun training is such that outside of special operations units, even personnel who carry a handgun as part of their daily duties qualify once a year, and if they’re lucky will train quarterly. Without seeking outside training, that’s insufficient levels of training to appreciate the minuscule performance advantages offered by the M9A3 over the M18.

Except for specific career fields like Military Police/Security Forces, the handgun is an afterthought in mainstream military use. The Army, Air Force, Navy and Marine Corps will be well served by the M18 for years to come. How do we pick a winner then, if the guns are basically the same and only separated by extremely small performance margins? According to the Army, the MHS is going to be significantly cheaper to maintain over its lifetime than the M9 is/was. That makes the winner…us.

Because you didn't get enough of the M1 Carbine in our four-part series back in 2019, we're back with more!...