Why does the barrel look crooked in my pistol? Why does a puny .380 ACP Beretta Cheetah have almost as much recoil as a 9mm Glock 19? Believe it or not, the answers to both of these questions are related. It all has to do with how straight blowback pistols work compared to short recoil operated (or locked breech) pistols.

Today, I’m giving my best shot at explaining the difference. I tried real hard not to use any big science words, too. Mostly because I don’t what they actually mean. Details in the video below and as always, you can read the full transcript, but this one has a few demos and animations that really help to clarify the concepts here, so I highly recommend watching this time.

Let’s take a look at the difference between blowback pistols and recoil operated or locked breech pistols.

Most handgun shooters seem to know that, theoretically, there is a difference, but they might be fuzzy on the details. So I’m going to try to help clear that up. Now, full disclosure: I took astronomy for my science credit because they said there would be no math. So I apologize in advance to all of you physics and engineering people if I don’t get all of the terminology quite right. I’m going to try to explain this in layman’s terms because that’s what helped me to understand it.

Basically, we are looking at what’s happening in that brief instant after the round discharges when the slide moves to the rear and back again. There have been dozens of different types of designs over the years to make a pistol do this, but probably 99% of semi-automatic pistols are either blowback designs or recoil operated.

What is Straight Blowback?

With handguns, blowback is usually synonymous with a more specific type called straight blowback or simple blowback. Like all modern firearms, the cycle starts when a firing pin hits the primer which ignites the propellant or powder inside the cartridge case [1]. That creates hot gasses that rapidly expand and dramatically raise the pressure inside the case [2]. That pressure forces the bullet out of the case and down the barrel [3], but that pressure is going in all directions and it will take the path of least resistance, so it’s also pushing the case against the slide [4]. That causes the slide to open and the empty case then ejects from the gun. The recoil spring is now compressed and when the slide can’t go any further, the spring forces the slide to start closing. On the way back, it picks up a fresh cartridge from the magazine and comes to rest again in the forward position.

So to prevent that from happening, in a straight blowback gun, the slide is simply held in place by its own mass and the tension of the recoil spring. That provides enough resistance for the slide to stay in place just long enough for the bullet to exit and drop the pressure to a safe level. This is why most blowback pistols are chambered for small-caliber low pressure cartridges like .380 ACP, .32 ACP, and .22 LR. In order for a blowback gun to work with higher pressure cartridges like 9mm, .40 S&W, or .45 ACP, the slide has to be massive. Hi Point is one of the only companies to actually do this and that’s why their guns look and feel so awkward. They are blowback pistols chambered for high pressure calibers.

This is a more conventional straight blowback gun. It’s a CZ83 chambered for .380 ACP. When I pop the slide off, you can see that the barrel is fixed — it’s attached to the frame and the recoil spring goes around the barrel. This is a style of blowback pistol pioneered by John Browning with the FN Model 1910. Not all straight blowback pistols work this way, but a lot of them do like the Walther PP series (PP, PPK, PPK/S, etc) and the Russian Makarov.

This Beretta Model 81 Cheetah in .32 ACP is also a blowback pistol. Just like the CZ, the barrel stays in place when the slide moves. But if I take this one apart, you can see that the barrel is not attached to the frame and the recoil spring is below the barrel on a guide rod. So some of the specifics may vary, but they are both straight blowback designs.

What is Short Recoil Operated?

Most pistols made today are short recoil operated, also called locked-breech pistols. These guns can more easily handle higher pressure cartridges because when the slide starts moving to the rear, the barrel moves with it. The two are locked together. For this Smith & Wesson Shield, the locking lug is this shelf here on top of the barrel that locks into the ejection port on the slide. 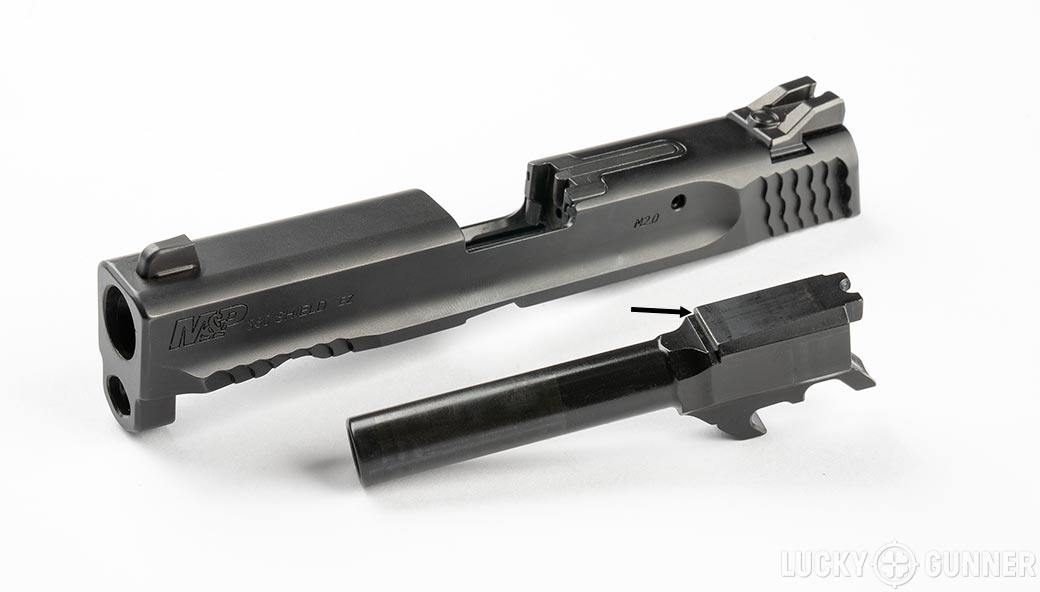 But they only stay together for the first couple of millimeters. We just need a little extra time for the bullet to exit the barrel and the pressure to drop. Then when the barrel reaches a certain point, it separates from the slide — in this case, it tilts down and stops moving to the rear while the slide continues on to eject the case.

Here’s some ultra slow motion footage of this process that we recorded a few years ago. Going frame by frame, here [1], the trigger has been pulled, but we can’t see anything happening yet. Now [2], the bullet has left the case but it’s still in the barrel and the slide has just barely started to move. We can’t see the case yet because the barrel is moving with the slide. Now in the next frame [3 & 4], the bullet is out of the barrel, the barrel and slide are still locked. After one more frame [5 & 6], the barrel has dropped down to separate from the slide so the case can eject.

By far, the most common type of recoil operated pistols today are the tilting barrel style which is another John Browning invention. It was popularized by the Colt 1911 and now you find them everywhere. You can always identify these guns because when the slide is locked open the barrel will be tilted at a slight angle and it will rattle around a little bit because it’s not locked into the slide.

Beretta is among the few companies currently making non-Browning-style recoil-operated pistols. The 92-series guns use a locking block to control the movement of the barrel rather than a tilting action. And the Beretta PX4 has a rotating barrel design.

Last week, I mentioned that recoil operated guns usually have less felt recoil than blowback guns of the same size and caliber. And that tends to be true even when the blowback gun is heavier. A lot of different factors contribute to felt recoil but my guess is that recoil-operated guns transfer the recoil force to the shooter’s hand over a longer period of time. The slide moves a little slower and that makes it easier to control. It feels more like a slow push than a quick snap — at least, relative to a blowback gun of the same caliber.

These days, nearly all new pistol designs use a short recoil action, even for smaller calibers. I actually can’t think of any centerfire handguns designed this century that use a straight blowback action. I’m sure there’s at least one or two I’m forgetting about, but suffice it to say, the industry is leaning heavily in the direction of recoil-operated locked breech pistols.